Comparison of the infestation of three rubber tree clones by Phragmantera capitata (Sprengel) S. Balle (Loranthaceae) in the South-west region of Cameroon

Rubber tree clones are used for their high latex production, resistance to the diseases and to the climatic conditions. The aim of this study was to characterize the parasitism of Phragmanthera capitata on three rubber clones. The study was carried out in the rubber plantations of the Cameroon Development Corporation located in 4 villages around Muyuka and Tiko, two locality of the Fako Department, South-West Region of Cameroon. The method used was cluster sampling and the parcels of 100 m × 100 m were measured in each bloc prospected. Parameter such as circumference of trunk, the row number, and the number of tufts of P. capitata were noted for each parasitized tree. Clone PB 217 (61.73%) recorded the highest parasitism rate, and PR 107 the highest average of number of tufts (5±3.12 tufts/tree). Parasitized trees of the clone PR 107 were located closer to the border than the others clones, which an average depth of 16.4 m. An efficiency struggle method against P. capitata must be found to preserve the yield of rubber tree plantations.

Along with palm oil, natural rubber is one of the few agricultural products from the Third World that has resisted the collapse of world prices. As a result of globalisation,   the   demand   for   rubber   is    constantly increasing. Rubber is used in the manufacture of tyres, but also in everyday life (manufacture of condoms, surgical gloves and syringes). It is extracted from the latex   produced  by  the  rubber  tree,  which  is  the  only exploited source of natural rubber in the world. Its exploitation is spread over three continents, namely South-East Asia, America and Africa. Asia, with 93% of world production, is the main supplier of natural rubber. Next, comes Africa (5%) and America (3%) (IRGSM, 2007). In Cameroon, rubber trees are mainly exploited in the Littoral, South-West and South regions.

Mistletoes are plants that occur in tufts and are linked to their host only by a structural and physiological bridge that constitutes an absorption or suction system, allowing the parasite to take water, minerals and additional organic matter that it needs (Bannister et al., 2002). In addition to wild trees, mistletoes attack cultivated species such as cocoa, avocado, citrus and rubber trees, reducing their yield (Sonké et al., 2000). The Loranthaceae family is widespread throughout the world and includes 77 genera and 950 species. In Cameroon, the Loranthaceae are represented by 26 species belonging to 7 genera (Polhill and Wiens, 1998).

It is therefore interesting to study Phragmantera capitata, the main species of the genus found in Cameroon on rubber trees, supplier of natural rubber, one of the few agricultural products of the Third World, along with palm oil, to have resisted the collapse of world prices. The aim of this study was to characterize the parasitism of P. capitata on three cultivated rubber clones.

The study was conducted around of Muyuka and Tiko, two subdivisions in the Fako Department, located, respectively to the north and southeast of the city of Buea, the regional capital (Figure 1). This region is characterized by a coastal humid equatorial climate of the Cameroonian maritime domain with a long rainy season and a short dry season (December-February). Rainfall is abundant and regular, averaging about 2975 mm per year. The average temperature is 25.6°C, with March being the hottest month of the year (26.7°C) and July the least hot month (24.2°C). The monthly relative humidity remains consistently high at around 80%. 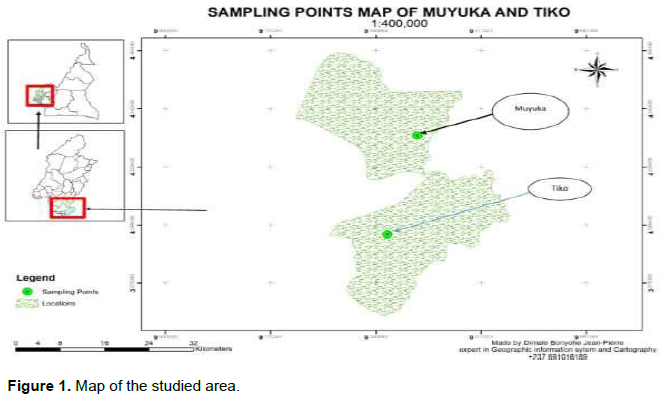 The work took place in four exploited plantations of the Cameroon Development Corporation (CDC), these plantations are located in the villages Big Ikange, Likomba, Meanja, Missellele, and Muyuka. The method used was cluster sampling, and the work was carried out on rubber trees between 20 and 25 years old, and the clones were selected on the basis of their representativeness in this age group. Thus, clones PB 217, PB 260, and PR 107 were selected for this study.

Delimitation of the parcels

The work took place in the period from August 2014 to September 2016. The clones were distributed in different blocks of variable dimensions. Three plots of 100 m × 100 m dimensions, so 1 ha each were delimited for each clone, for a total area of 9 ha. The trees were planted in rows, and the distance between rows was either 2.8 m or 7 m, depending on the orientation of the plot in relation to the road.

Loranthaceae species were observed in the canopy either by naked eyes or by using a pair of binoculars. A delimber was used when the foliages of many trees were crossed, making observation difficult.  Plots were prospected line by line, and the number of tufts of P. capitata was recorded for each parasitized tree. According to the number of tufts found on the trees, a scale of parasitism intensity was established with four levels: lowly parasitized (1 to 2 tufts); moderately parasitized (3 to 5 tufts); heavily parasitized (5 to 10 tufts); very heavily parasitized (> 10 tufts). Other parameters such as tree circumference and the row number were recorded. The following indices were calculated from the data collected.

The density of parasitism was calculated as the ratio of the number of parasitized trees (Np) per unit area (S).

The parasitism rate was calculated as the ratio of the number of parasitized trees (Np) to the total number of trees in a block (N).

Outbreaks are considered as trees with large diameters and a high number of parasite clumps. In this study, foci correspond to trees of circumference class X, and which are very heavily parasitized. The class X has to do with trees which have a circumference of 90 cm and above. 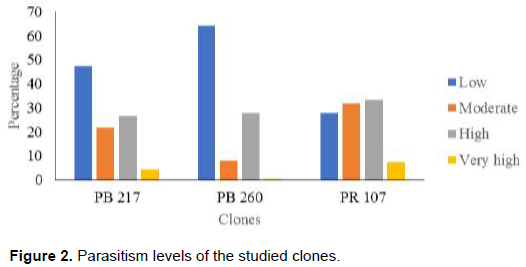 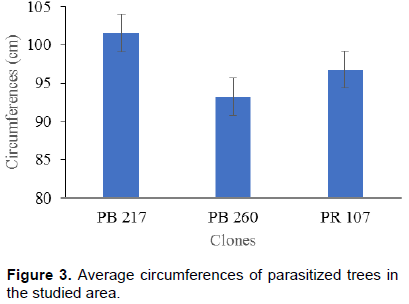 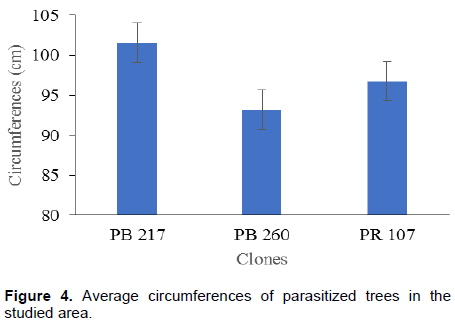 Level of parasitism of the class 10 of each clone was permitted to determine 51 outbreaks of  P.  capitata.  The clone PR 107 is the main focus of P. capitata spread in the study area with 27 outbreaks, followed by clone PB 217 with 22 outbreaks. Clone PB 260 contains only 2 outbreaks (Figure 5). 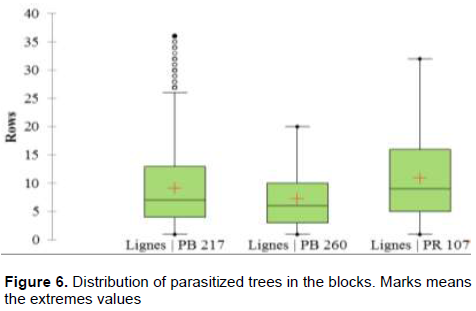 The study of the correlation between morphometric parameters of the clones shows  that  circumference  and number of tufts correlated positively, but have correlated negatively with depth in all of the studied clones (Table 2). 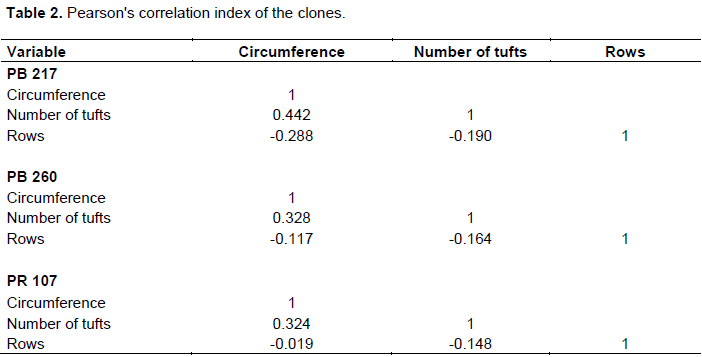 The   results   showed  that  all  the  clones  studied  were parasitized. This shows that there are no clones resistant to Loranthaceae parasitism. This was also demonstrated in Nigeria where Loranthaceae attacked both native and exotic clones (Orumwense et al., 2012). Clone PB 260 showed the lowest rate of parasitism among the 3 clones studied. Similar results were found in Gabon, where clones AVROS 2037, PB 217, PB 235, and GT 1 were characterised as highly parasitised, and clones PB 261, PB 260 and RRIM 600 were characterised as low parasitism (Engone, 2006). This could be explained by the fact that clone PB 260 has dense foliage, allowing little light to pass through, thus making it difficult for P. capitata, which is known to be a heliophilic species, to establish itself.

The gradient of tree susceptibility to parasitism was explained by the presence of anatomical parameters (thickness of the suber and collenchyma) and biochemical parameters (phenolic compounds) in poplar. These characteristics, which allow plants to defend themselves against external aggressions, were found to be strongly correlated with resistant clones, which were characterised by a high thickness of suber and cortical parenchyma, as well as a higher density of tannins (Hariri et al., 1992). However, in African Loranthaceae, phenolic and tannin contents did not show significant differences (Engone, 2006). On the other hand, low tree density in a plot increases the amount of incident light, thus favouring the establishment of P. capitata. This observation was confirmed in clone PR 107, which had a lower tree density and a higher rate of parasitism. The study of the row parasitized trees showed that clone PB 260 are located more closest to the edge of the plantations, and those of clone PR 107 more inside the plantations. It means that light is a factor greatly in parasitism in clone PB 260, but would have less effect in PR 107.

The high rate of parasitism in all the clones studied reflects the high implementation of P. capitata in the region studied. Similar results were found in rubber plantations in southern Cameroon (63.4%), in citrus plantations in Benin (59.87%), or on tree legumes in Côte d'Ivoire (56%) (Dibong et al., 2009; Houenon et al., 2012; Soro, 2005). However, this infestation rate is much lower than the 96% observed on shea in northern Côte d'Ivoire (Traoré et al., 2003), and much higher than the 10.4% found in rubber plantations in southern Côte d'Ivoire (Soro et al., 2011). The difference observed with shea is explained by the fact that the shea plantations were located in a semi-arid zone. In this type of environment, the trees are spaced out and strongly branched, and would thus constitute favourable sites for the installation of Loranthaceae. In Côte d'Ivoire, where the rate of parasitism was 10.4%, the explanation could be found in the fact that the studies were carried out on trees aged 15 to 20 years, whereas the trees in this study belonged to the 20 to 25 years age group, thus confirming that parasitism increases with the age of the host plant (Engone, 2002).

The difference between the parasitism rates of rubber trees in Tiko and Nyete can be explained by the fact that parasitism depends on geographical location (Raynal-Roques and Paré, 1998). On the other hand, the Muyuka and Tiko areas are characterised by a Cameroonian type climate with one dry season, while the Nyete area has a climate with two dry seasons, thus showing that P. capitata develops optimally in areas with high rainfall.

P. capitata shows a high rate of parasitism  in  all  clones. However, genotypic and phenotypic variability allows us to characterise parasitism at the level of each clone. Indeed, P. capitata is localised at the edge of the plantation in PB 260, whereas it extends much further inland in clones PB 217 and PR 107. Since the main foci of propagation are the individuals of clones PR 107 and PB 217, it is important to set up a monitoring system to follow the evolution of the spread of this species in rubber plantations, in order to avoid a drastic drop in production.

The authors thank the Cameroon Development Corporation (CDC) for giving their experimental parcels for this study.