Medics are annual forages very interesting in pastures of Mediterranean and steppes rangelands. Such as other leguminous, they are subject to dormancy which delay and reduce germination. The response of these species (Medicago polymorpha, Medicago intertexta, Medicago ciliaris, Medicago truncatula, Medicago muricoleptis) to mechanical, physical and chemical scarification, applied for break dormancy, had been studied. Germination is almost full (reaching 100%) is fast (24 h) after scarification with sand-paper, which demonstrates that dormancy is exclusively imposed by teguments of the grain. Soaking in boiled water (20 s by population), passing through sulphuric acid during 5 min and 180 mn, passing in freezer and in refrigerator (respectively 2 h and 5 days), in drying oven at 115°C during 20 mn eliminates partially dormancy. However, passing through ovine digestive tract followed by germination test possesses the same effect as the witness. In exposure in ultra-low temperature at 196°C (liquid nitrogen) during 25 mn improves germination and grains germination speed to all quoted species which is comparable to scarified grains results by sand-paper.

Fertilisation is a result of seed, in flowers plants, angiosperms, the fertilisation is double. The grain is constituted of several different types of origin tissues: embryo, albumen and teguments.
Embryo and albumen are tissues of fertilisation. At the periphery of the grain, we find teguments, protecting sleeves being more or less resistant. They are maternal origin and drift from ovary tissues  (Brunel,  2008).  These organs are intended to give birth to a new generation of plants; during germination process they ensure the survival of species. They are adapted organs to resist in adverse conditions. Such resistance allows them to reach, often for a very long time, in substantially inert state, conditions that will allow them to germinate (Mullon and David, 1982). These transient aptitudes to the germination typically called dormancy.
We can consider it as an exceptional resistance of seeds to unfavourable conditions in exterior environment but also, and above all a very high level of dehydration state of the seed. Furthermore, desiccation seems to be more active than grain’s drying. It is an active phase in terms of gene and metabolism expression. Which implied that preparation of grains for germination is already starting during desiccation of seeds (Angelovici et al., 2010). According to Pinfield and Dungey (1985) a lot of time and efforts had been made to try to understand and the difference between regulation mechanisms of main-tenance dormancy, perception of inductive conditions, the break dormancy and the germination process. Mayer and Poljakoff-Mayber (1982) explained; dormancy may be on account of the embryo’s immaturity, imperviousness of seed coat to water or to gas, preventing of embryo development because of mechanical reasons, of particular requirements of temperature or of light, or presence of inhibitory substances of the germination. Others authors attribute dormancy to physiological properties and / or morphological of the seed. According to Baskin and Baskin (2004), it may be classified in five large categories: physiological, physical, morphological, morpho-physiological and combinatory (physical and physiological). Generally, physical dormancy is caused by one or several waterproof layers of palisades cells macrosclerides in tegument (Baskin and Baskin, 2004).
However observations by scanning electron microscope revealed a thicker layer of palisades cells in tegument of Medicago orbiculairis compared to Astragalus hamosus which can explain the higher resistance of its grains facing chemical and physical agents of scarification and of hot water (Patane and Gresta, 2006). In Mediterranean environments, grains of numerous species of leguminous must survive in hot and dry summers to allow seedlings, avoid temperatures potentially lethal and to delay germination until the next spring. Grains of those species developed a resistance mechanism to this stressful condition and complex machinery we can perceive when environmental conditions are favourable to break dormancy (Scippa et al., 2011). Collection, evaluation and valorisation of local populations of Medicago in Algeria began from 1971/1972 by Abdelguerfi. As a matter of fact, he identified 17 species belonging to different bioclimatic stages (Abdelguerfi, 1989). Although those species showed an interesting use in  agriculture and a large adaptability with a wide range of environ-mental conditions (Chebouti and Abdelguerfiâ€‹â€‹, 1999), little information is available in literature on characteristics of the grain’s germination and techniques to break its seed coat imposing dormancy (Chabouti and  Abdelguerfi, 1999). Several treatments had been proposed to reduce and improve tegument’s hardness and rise germination rate in others species of leguminous notably Acacia (Danthu and Neffati, 2003). In this context this research aimed to evaluate response of grains’ germination of Medicago originating of two different harvesting years (2004 and 2012) to different treatments of scarification, in order to promote their use in improvement of natural rangelands of steppes and Mediterranean areas.

Vegetable material or seed come from collection of National Higher Agronomic School (NHAS). The code and weight of 1000 grains of used populations are shown in Table 1. This seed is harvested in 2004 and 2012. The storage of the seed of 2004 is made in an ordinary room requiring no conditioning. We wanted to test germination of this seed with one of year 2012. The studied species are classified according to the colour and size into three groups. Species with big grain (Medicago intertexta, Medicago ciliaris) of black colour, species with small grain (Medicago polymorpha, Medicago truncatula) of yellow-brown colour and species with middle size Medicago muricoleptis of black colour. The shape of all species is feeding nozzle.
Treatments of populations
(i) Seed treatment with sulphuric acid during 5 mn for the first test and during 180 mn for the second test. After we rinse under running water.
(ii) Passing of the seed through the drying oven at temperature of 115%c during 20 mn.
(iii) Isolation of an animal and introduction in its diet of 500 gr of pods by meal, twice a day during six days (M. polymorpha, M. ciliaris and M. truncatula). Then liberation of ovine and recuperation of faeces’ seed by soaking in tap water and sifting.
(iv) Passing of the seed into boiled water (100°C) on the fire during 20 s.
(v) Passing of the seed in the freezer during 1 h, but for both steppe species during 5 days in the refrigerator.
It should be noted that seed of each population is put in small perforated closed cages which we have made with grid and sieve. Cages are denominated by codes of corresponding population.  So during passing in chemical products, cages are gathered and put in a recipient containing the adequate product (acid, liquid nitrogen, boiled water or passing in freezer). After the timing, rinsing is made under tap running water. Drying is made in the open air. As for passing through the oven, seed is put in paper bags.  Witnesses undergo no treatment.

Seedling after seeds treatment
After all treatments, seed (treated and witness) is sown in Petri boxes full of cotton. As for recuperated seed from faeces of ovine a second seedling is made, it is about of alveolus bearing a mixture of ground and compost to stimulate germination. It should be noted that seed without teguments is also sown to know their effect on the germination. Histological cuts have been performed on teguments by method of double coloration (methyl green and red congo). Observations have been made by optical microscope. The seed irrigation in Petri boxes is done with tap water. The rate calculation of the germination begins at the stopping of appearance of rootlets by counting number of germinated grains x 100 divided by the total number of grain contained in Petri box. Analysis of variance is carried out by statview software.

As for grains without teguments, all studied species gave a germination rate of 0% except Poly201 in the two study years which gave 100 and 87.5% of germination respectively for year 2012 and 2014 (Table 2). Also, the recuperated seed of ovine’s faeces (Photos 1 and 2) gave 0% germination; we can say that passing of the seed in digestive tracks of ruminants has no scarifier effect. However; animal by its displacements may have a disseminator effect of the seed especially during its transhumance.
Analysis of the variance showed that storage years of seed have no influence on different rates of obtained germinations. Since, according to Tran and Kavavgh (1984) the waterproof coat protects embryo from unfavourable storage and environmental conditions and extend actively longevity of seeds. A combination of two mechanisms: closer shrinking of grains envelope cells and impregnation of cells with hydrophobic substances may exist and operating mechanisms may vary between different species.  Observation of   histological   cuts   by optical microscope, after passing of seeds in boiled water and after coloration in green of Methyl and in red Congo gave Photos 3 and 4. These photos showed three different layers responsible of protection and of dormancy of seeds. The best results are obtained by mechanical scarification (with sandpaper). The percentage of germination reaches until 100% (Table 3). 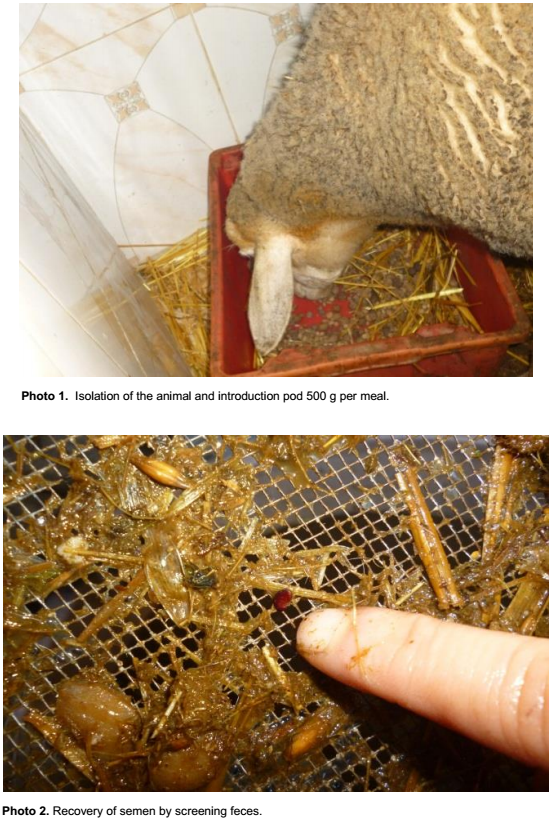 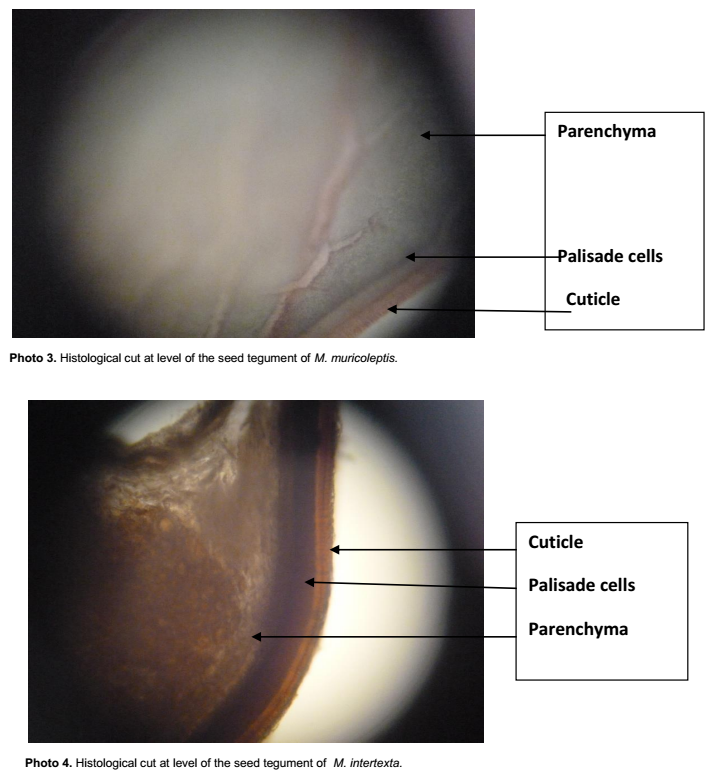 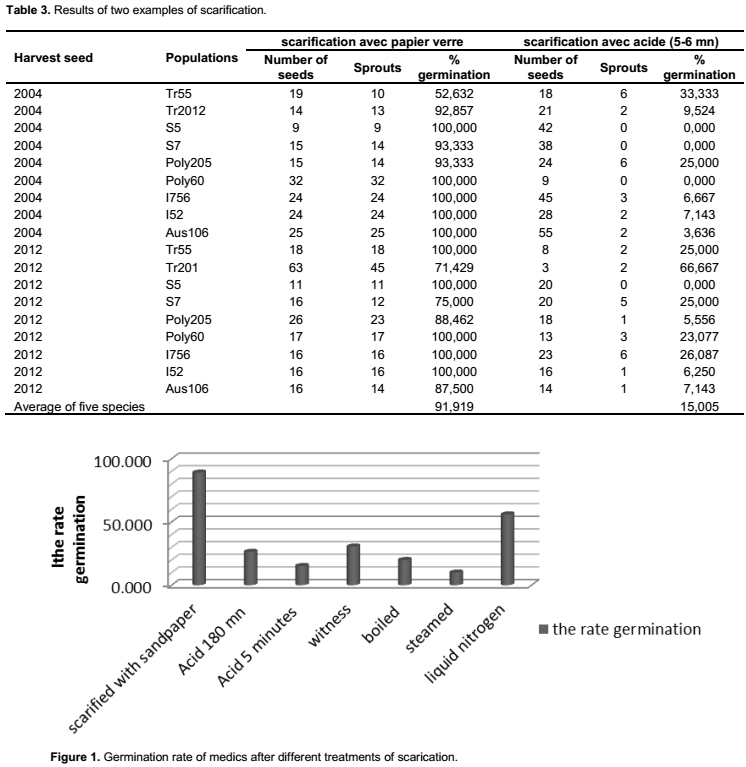 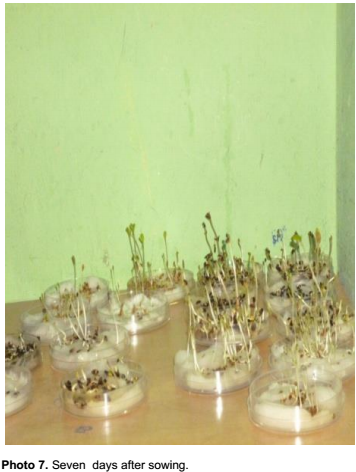 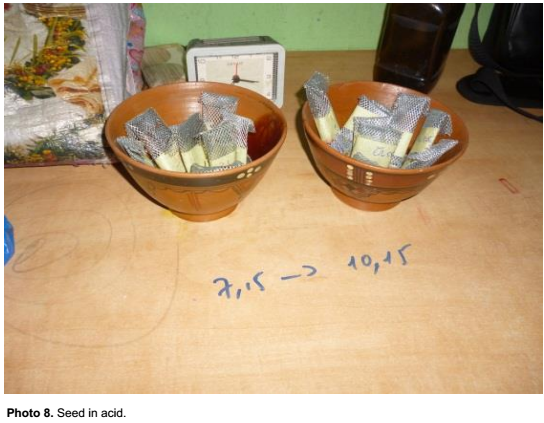 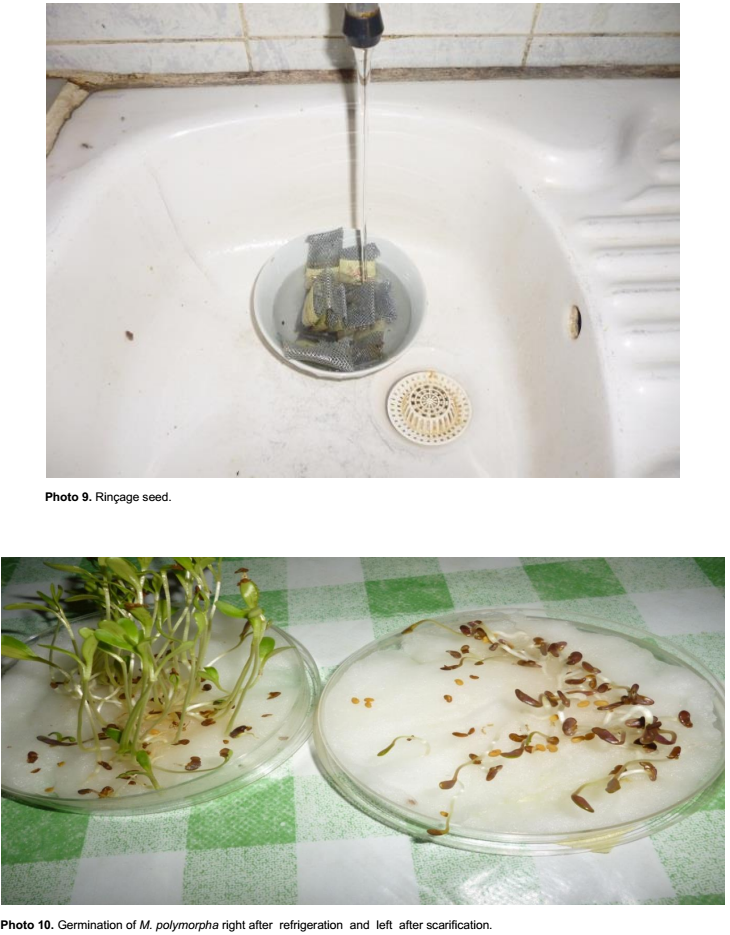 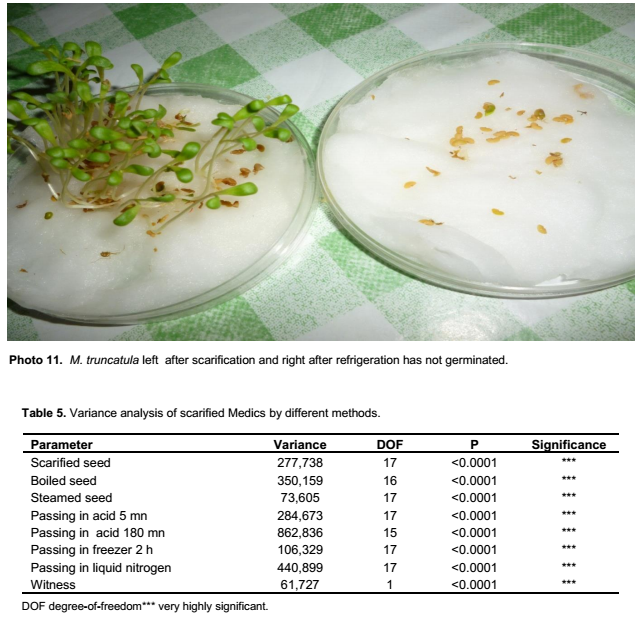 The dormancies are very profitable to wild species, as they contribute ensuring their maintain in ecological conditions and under difficult climatic conditions. But sometimes there are important problems with cultivated species for which obtainment of germination necessitates research of adjusted treatments in each case. The dormancy is heterogeneous in Medicago, varies between species and within populations, the variance is high. Effect of physical treatment or chemical gives a germination rate which varies between 0 and 95.34% for I756 (acid 180 mn), 50% for I756, 70% for I52 boiled and 66, 67% for Tr201 (acid 5 mn) while higher to 50% case of cold in steppes species. The same observation is made within populations. Thus, this is an inter-specific variation and inter-population.
Furthermore, both treatments which offer germinations rate potentially high and fast in all populations which are: Scarification with sand-paper and passing in liquid nitrogen. In spite of this latter gives lower result than the first one, it is more practical and easier to perform than all others means. It is about of a fast passing of a limited number of grains to be sown, but scarification with sand- paper, number of grains is limited and uses a long time. The germination percentage of these scarified populations by sand-paper in 2013 and sown in 2014 gave the following results: 21.92% of germination in ciliaris, 15% of germination in cultivar Gemalong, 18.5% in Truncatula, 26% in Intertexta and 7.5% in Granadensis. Therefore, we note that Intertexta keep their germination power more than others species.