The efficiency of broadcast versus in line phosphate fertilization has been studied; however, soil density as a determining factor for soil efficiency has been less studied.  Thus, the objective of this study was to evaluate the effect of broadcast and in line phosphate fertilization in soil with different densities on corn development. The experiment was conducted in pots under greenhouse condition. A completely randomized design was used in a 2x3 factorial arrangement with four replications. Treatments were two levels of soil densities (1.2 and 1.6 g cm-3) and three forms of P application (broadcast, in line and without P). Corn stem diameter, plant height, root volume, root and shoot dry matter, and root and shoot phosphorus content and accumulation were evaluated. Application in line resulted in higher P accumulation by corn plant. There was higher plant dry matter accumulation at soil density 1.2 g cm-3 than at 1.6 g cm-3. Phosphate fertilization in line at soil density 1.2 g cm-3 enhances dry matter accumulation in corn plants.

Soil compaction is one of the most severe degradation processes that occurs in the soil and have been affecting about 68 million hectares around the world from the vehicular traffic (Nawaz et al., 2013). Its effect on the soil structure results in higher soil density (Souza et al., 2012) and lower soil porosity (Singh and Hadda, 2014). The availability of nutrients for plants is reduced in compacted soils (Barzegar et al., 2016), such as phosphorus (Novais et al., 2007). Besides that, soil compaction leads to  lower crop yield due to increased resistance to root growth and reduced efficiency of water and nutrient use (Twum and Nii-Annang, 2015).

The nutrient P participates on plant metabolism as the main component of adenosine triphosphate (Taiz et al., 2017), this nutrient has an essential role in physiological and biochemical processes, acting as an energy transfer agent within the plant; thus enabling photosynthesis and respiration  (Hawkesford   et  al., 2012),  having  essential role on plant development (Amanullah and Almas, 2012).

The soils with a high degree of weathering help to maintain low levels of available phosphate resulting from high P adsorption capacity of iron and aluminum oxides and hydroxides in soils (DeLong et al., 2013; Fink et al., 2014). Slow diffusion contributes to low level of available P in soil which limits plant uptake (Shen et al., 2011). Moreover, in line fertilization (close to root system) should be chosen over other methods to favor plant uptake of P (Prado, 2008).

The most common method of P application in grain production is soil surface with or without incorporation, in row placement and in band placement (Galetto et al., 2014). Among the determining factors for the best P application method are soil physical and chemical proprieties, fertilizer type and crop type (Ceretta et al., 2007). The phosphate fertilizer applied on the surface will keep contact with soil, causing the P fixation and affecting the absorption by the plants (Barbosa et al., 2018).

Reports have shown that application of phosphate fertilizers using broadcast method without incorporation in a no till system leads to different distribution of P within the soil profile compared to in line application, this will enhance P concentration in superficial layer from 0 to 5 cm (Souza et al., 2016). However, soil compaction might affect the broadcast phosphate fertilization management in no till areas (Santos et al., 2005), as root development and crop production especially in areas under water deficiency might be reduced (Valadão et al., 2015).

The experiment was conducted in the greenhouse and in the Laboratory of Soil, Fertilizer and Foliar Analysis (LASAF) of University of Mato Grosso State – UNEMAT (09° 51’ 42’’ S and 56º 04’ 07’’ W), campus Alta Floresta – MT, in 2016. According to Köppen classification, the weather is classified as Aw with two well defined seasons: raining summer and dry winter, with temperatures around 26 °C and average rainfall between 2000 and 3000 mm (Alvares et al., 2014).

The experiment was conducted in a completely randomized design in a factorial 2x3 with 4 replications. The treatments were two soil densities D1 1.2 g cm-3 (normal) and D2 1.6 g cm-3 (compacted), without P application (T1),  with  superficial  broadcast P (T2), and with in line P (T3). Each experimental unit was composed using a pot of 4 dm-3 capacity.

Irrigation with tap water was done every day, in order to maintain soil water capacity of about 60%. After 35 days of emergency, the stem diameter, shoot height, root volume, root and shoot dry matter, and root and shoot P content and accumulation were evaluated.

The roots were separated from shoots, washed with tap water followed by distillated water, and left submerged inside a graduated cylinder containing low level of water. The difference between initial and final volume was used to determine root volume. Roots and shoots were placed into Kraft papers and dried in a forced-ventilated oven at 65°C for 72 h to determine its dry matter content. Shoots and roots samples were ground in a Wiley grinder and chemically analyzed for P content using Embrapa (2009) methodology.

The results, for normality (Shapiro-Wilk) and homoscedasticity, were analyzed. The analysis of variance (ANOVA) was done with F test (p<0.05), and the means compared through Tukey test at 5% of significance, using ASSISTAT software version 7.7.

There was a significant interaction effect between P application and soil density on corn root and shoot P content (Table 1). Root P content at density 1 did not show significant difference among P application, whereas at density 2 higher root P content was observed on plants treated with in line P compared to broadcast and without P (Table 2). There was no effect of soil density on root P content when in line P application was used; however, higher root P content was observed at the lowest density in plants under broadcast P application and without P treatment (Table 2). These results support the hypotheses that soil compaction decrease P diffusion flow, thus reduces ion-root contact and plant uptake. According to Barbosa et al. (2018) the lower levels of P provided by broadcast fertilization P are justified by the low initial level of this nutrient in the soil, causing a reduction in the availability of P within the reach of the root. Amanullah and Almas (2012) affirmed the application of localized P enhances root  system  and provides upper contact with nutrients. 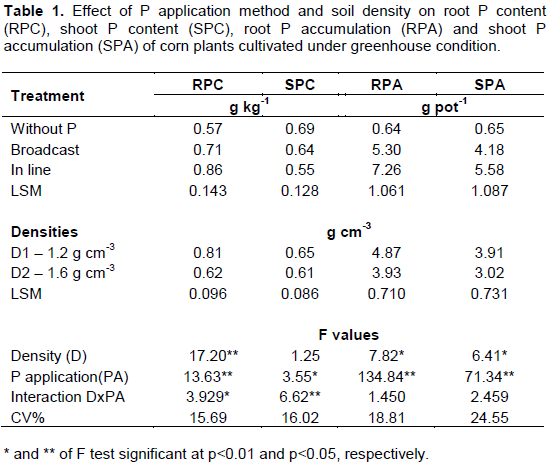 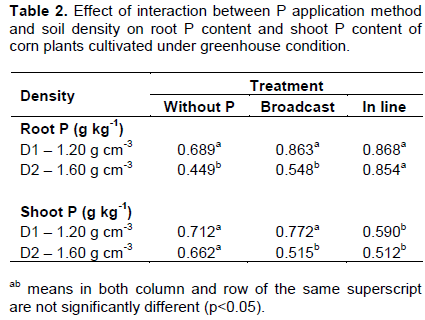 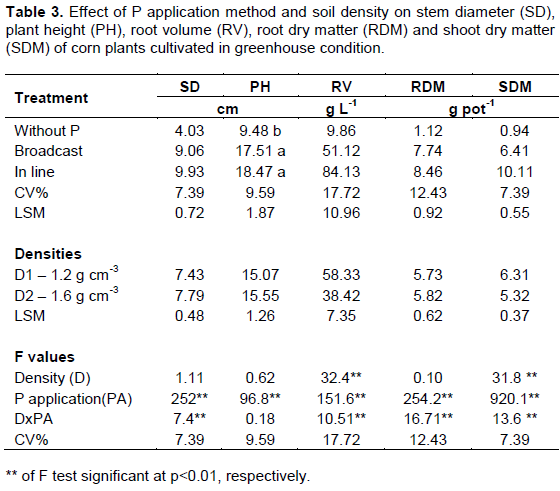 There was higher accumulation of P in shoot and root of plants cultivated in soil with density 1 than in soil with density 2 (Table 1). Therefore, it was noticed that soil density of 1.6 g cm-3 was harmful to root and shoot growth and P uptake. Also, soil compaction results in higher resistance to mechanical penetration that limits radicular development and reduces root capacity of water uptake, hence it affects plant growth (Ortigara et al., 2014).

Plants  with P applied in line and broadcast were 94.83% and 84.70%, respectively, which are higher than plants without P fertilization (Table 3). This is explained by P essentiality on plant metabolism, the component of nucleotides used in energy metabolism of plants (such as ATP) and in DNA and RNA (Taiz et al., 2017); resulting in smaller plants in soils with lower P availability. 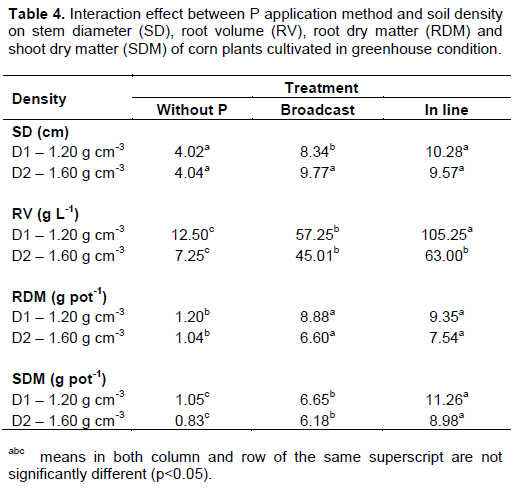 Regardless of soil density, root volume was higher when P was applied in line compared to broadcast application and without P application (Table 4). Moreover, higher root volume was observed at density 1 when P was in line applied. Since P has low mobility in soil, lower root volume affects uptake of P by corn plants (Santos et al., 2005) and also affects root distribution and biomass within soil profile ((Twum and Nii-Annang, 2015); resulting in reduction in crop yield. This fact elucidates the importance of knowing crop threshold for soil compaction, as well as of monitoring soil compaction, especially in tropical regions in which there is low levels of available P.

Therefore, higher root and shoot dry matter (Table 4) might be explained through higher accumulation of P in corn root and shoot (Table 1). These results elucidate the importance of  accurate management of phosphate fertilization in order to increase plant nutrition.