Brazil is the largest producer and exporter and the second largest consumer of coffee in the world, with a production of about 55 million benefited bags in 2016 (ICO, 2017). During the fruit processing, a large volume of residues is produced, especially coffee straw (outer skin + parchment), which is often incorrectly discarded, resulting in damage to the environment (Magalhães et al., 2008).
In agriculture, the importance of the application of straw mulch has been tested as useful tool to improve soil quality and to reduce soil erosion. Especially, coffee straw, that is widely used as a composition of organic substrates for seedling production (Godoy et al., 2008; Coelho et al., 2016; Cerdà et al., 2017). It can also be used as mulch, both for crop nutrition, since this residue is an excellent organic matter, potassium and nitrogen source (Costa et al., 2007), as well as for managing natural plants, because of its negative effect on some natural plants due to its allelopathic potential.
Allelopathy is a common phenomenon in plant communities, in which certain plants or plant residues release allelochemicals substances that interfere with the development of nearby plants (Zhang et al., 2011). The allelochemicals can act in pre and post-emergence stages and in the soil seedbank (Han et al., 2008), which is an important factor in the control of certain undesired species, thus obtaining more productive crop systems (Goldfarb et al., 2009).
Caffeine and phenols found in coffee are secondary metabolites that act as allelochemicals in several plant species (Lima et al., 2007). It is known that conilon coffee has higher caffeine and polyphenols content than arabica coffee does (Ribeiro et al., 2014). This fact indicates that the straw of each one of these species of coffee may present different allelopathic responses that might interfere positively or negatively in the plants present therein, including the main crop (Rizzardi et al., 2008; Tesio et al., 2011; Campiglia et al., 2012).
In spite of presenting a great allelopathic potential over invasive plants and of being a source of nutrition for several crops, there are still few studies in literature that correlate the use of coffee straw as mulch in cultivation and weeds management. May et al. (2011) reported that coffee skin can also be tested for the creation of natural herbicides less aggressive to the environment, and show the great importance of studies that seek new options for the usage of coffee straw.
In this research the crop species tested are among the most cultivated in Brazil. Besides being highly sensitive to allelopathic substances, they are widely used as bioindicator plants for bioassays. The natural plants tested are the most present in cultivated areas, and they compete for the production factors with the cultivated species, causing reduction of productivity and product quality (Lorenzi, 2008).
The objective of this study was to evaluate the effect of mulches (conilon and arabica coffee straws) on the germination and development of three crops (Lactuca sativa, Cucumis sativus and Solanum lycopersicum) and three weeds (Eupatorium maximilianii, Amaranthus hybridus and Bidens pilosa).

The experiment was carried out at the weed and medicinal plants sector of the Center of Agricultural Sciences and Technology of the Universidade Estadual do Norte Fluminense Darcy Ribeiro, located in the city of Campos de Goytacazes-RJ, at latitude of 21°19'23" S and longitude of 41°19'41" W. According to the classification of Köeppen, the climate is tropical, hot and humid with rainy summers, dry winters, and average altitude of 11 m.
A completely randomized design of six repetitions was used. The treatments were arranged in a 3×6 factorial scheme, with three treatments of soil cover: Control (uncovered), conilon coffee straw (Coffea canephora) and arabica coffee straw (Coffea arabica); and six plant species (Lactuca sativa, Cucumis sativus, Solanum lycopersicum, Eupatorium maximilianii, Amaranthus hybridus and Bidens pilosa).
Conilon coffee straw was obtained from the production and processing of grains of plants from the variety G35 cultivated in the municipality of Muqui, Espírito Santo, at latitude: 20º57'06" S, and longitude: 41º20'45" W and altitude, 250 m. The arabica coffee straw was obtained from the production, pulping and processing of grains of Catuaí Vermelho IAC 81 cultivar, cultivated in the city of Venda Nova do Imigrante, Espírito Santo, Brazil at Latitude: 20º20'23" S, longitude: 41º08'05" W and altitude 63 m.
The seeds of L. sativa, C. sativus and S. lycopersicum were acquired in the local commerce. They present fast germination and high sensitivity to allelopathy. The seeds of E. maximilianii, A. hybridus and B. pilosa were purchased from Cosmos Agrícola Produção e Serviços Rurais Ltda (Agrocosmos), a company specialized in the control of prepared seeds, located in the city of Engenheiro Coelho, São Paulo.
The seeds were sown in polyethylene trays (25 cm × 40 cm) in an 18 cm long line and 5 cm between the rows. Different number of seeds was used for each specie, in order to allow adequate densities of germination and plant growth. 18 seeds of L. sativa, 8 of C. sativus, 12 of S. lycopersicum and black pickle and 20 of E. maximilianii and A. hybridus to the depth of 1 cm was used.
The substrate used was 150 mL of sand that had received irrigation for five days before planting, in order to leach possible compounds present in the material. Subsequently, the substrate was covered, between rows, with 150 mL of dry coffee skin per 90 cm2 of area, except the control, which remained uncovered. The treatments were irrigated daily to maintain the moisture content of the soil close to the field capacity.
The allelopathic activity was evaluated by the following tests:
1. Percentage of emergence (PE): Determined by the count of the number of seedlings emerged in the last emergence assessment, according to the species, on the seventh day after installation of the test for L. sativa; on the eighth day for C. sativus; on the fourteenth day for S. lycopersicum, A. hybridus and B. pilosa; and on the twenty-fifth day for E. maximilianii. The results were expressed as percentage of emerged seeds (Brazil, 2009).
2. Emergence speed index (ESI): The count of emerged seedlings was performed daily, from first seedling emergence to the last one according to each species, and subsequent conversion to the index proposed by Maguire (1962). Fresh matter (FM) and dry matter (DM) of the seedlings: At the end of the total emergence test, the seedlings were removed from the trays, washed in running water, taken to the laboratory, where they were weighed to establish the amount of fresh matter. Then the seedlings were placed in a forced air convection oven at 40°C for 72 h. The weighing were realized on a precision scale, with the results expressed in milligrams per seedling (mg plant-1).
The data were submitted to Liliefors test for normality of variance and Cochran and Barttlet test for homogeneity. In these tests, the need to transform the PE and ESI variables by the arcsine of the square root (x / 100) and the FM and DM by the square root (x + 1) was identified. The variance analysis and mean separation were done by the Tukey test at 5% probability level. The software SAEG 9.0 was always used.

The variance analysis indicated a significant interaction effect (P<0.05) between the type of mulch and the species studied for all variables analyzed, as shown in Table 1.

Among the evaluated species, L. sativa and C. sativus were the ones that presented the highest percentage of emergence both in the control (without mulch) and in the covered with arabica coffee straw treatments. However, the straw from conilon coffee reduced the emergence of L. sativa to 28.70% (a reduction of 60.19% in relation to the control), as shown in Table 2. 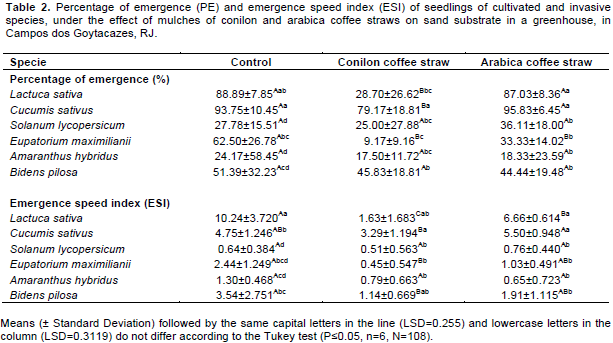 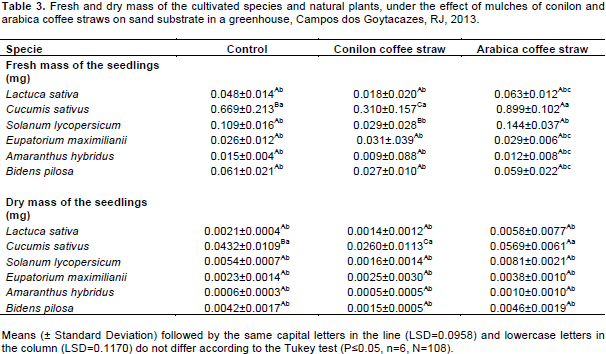 It can be observed that the seedlings of S. lycopersicum and C. sativus suffered a negative influence of the conilon coffee straw mulch, with 53.66 and 73.39% fresh mass reduction, respectively. The arabica coffee straw influenced only the C. sativus, increasing its fresh mass by 34.37% in relation to the control.
It was found that the conilon coffee straw provided a reduction of 39.81% in the dry mass of C. sativus seedlings, whereas the arabica coffee straw provided a 31.71% increase in the dry mass of its seedlings in relation to the control. The other evaluated species behaved indifferently in relation to this variable, which indicates that, although the mulches affect the germination and emergence of these species, they do not influence the development of the seedlings.
Caffeic acid (3,4-dihydroxycinnamic acid) present in coffee straw can alter root activity by inhibiting the absorption of phosphate and potassium by depolarization of root membranes (Barkosky et al., 2000). This fact may explain the lower amount of fresh and dry mass of the S. lycopersicum and C. sativus seedlings, when conilon coffee straw was used as mulch.
Barkosky et al. (2000), when evaluating the allelopathic effects of caffeic acid in Euphorbia escola, verified that the exposure of the plant to caffeic acid for 30 days reduced the leaf area, the leaf mass, root mass, root length, above-ground length and total plant weight, when compared to the control. This result corroborates with those found in this work, since conilon coffee straw probably has a higher concentration of caffeic acid than arabica coffee straw does, thus reducing the dry mass of the C. sativus seedlings.