Variability of soil chemical properties in lower Wabishebele Sub-Basin in Somali Region South-eastern Ethiopia, as influenced by land use and land cover

This study was performed at lower Wabishebele sub-basin in Somali region south eastern Ethiopia to analyse the land use and cover and spatial variability of soil chemical properties of the sub-basin and develop soil map. A total of 41 soil samples were collected from 0-30 cm depth and analyzed for; pH total nitrogen (TN), available phosphorus (AP), and exchangeable potassium (EK). The data was analyzed through descriptive statistics and geostatistical methods. The results showed that highest mean value of pH was recorded from bare land (8.05). The highest mean of soil N was seen on potential croplands (0.251) followed by dense shrub land (0.230), woodland (0.230), croplands (0.187), and sparse shrub land (0.159) and bare land (0.151). The highest mean of AP recorded at dense shrub land (7.279) followed by potential croplands (6.607 ppm), cropland, woodland, bare land and sparse shrub land. Soil map was developed for lower Wabishebele sub-basin. Therefore, the findings of this study can be used as baseline information to implement appropriate soil management intervention for current study area.

Food production in the tropics and subtropics usually relies on available soil nutrient stocks/soil fertility. This soil fertility is a major production factor for most farmers in Sub-Saharan African Countries in general and Ethiopia in particular where agriculture is the backbone of the country’s economy (Sheldrick et al., 2003). However, loss in soil fertility and productivity, which occurs from time to time in Ethiopia, is one of the key factors limiting crop yield (Gebreyesus et al., 2011; Yared et al., 2021). Soil erosion, nutrient depletion, and a lack of effective and area specific soil rehabilitation and management methods all contributed to the  fall  in  soil  productivity.  This  could have occurred due to lack of area specific soil information and the necessary remediation. Therefore, understanding the geographical and temporal variability of soil is necessary for effective soil management (Guan et al., 2017; Yared et al., 2021).

The lack of site-specific soil management recommendation to replenish falling soil fertility has been the major challenge to boost crop production in Ethiopia (Alemu et al., 2016). As a result determining the spatial variability of soil chemical characteristics is very crucial to developing and implementing sustainable soil management and improved cropping systems (Mersha and Meten,  2020; Yared et al., 2021). However, soil properties vary in spatially and temporarily due to the combined effect of biological, physical, and chemical processes over time (Mersha and Meten, 2020; Panday et al., 2018). This may vary within farmland or at the landscape scale and between land uses system as well (Alemu et al., 2016; Corwin and Lesch, 2003). Therefore, soil fertility management requires extremely site-specific interventions. However, site-specific soil management often requires precise and detail spatial information about soil properties of given area (Huang et al., 2006). This detail soil information can be made available through intensive soil chemicals analysis for each specific area and delineating information obtained using remote sensing tools in the form of maps. Modern remote sensing tools including Geo-statistics, GIS and GPS will allow in generating detail soil information along with their map for specific areas and land use system (Alemu et al., 2016; Mohamed et al., 2019b).

Despite the relevance of land use and cover based soil characterization, few studies have been done to investigate the spatial variability of soil properties at different land use catchment-scale. Particularly, in south eastern part of Ethiopia at lower Wabishebele sub-basin almost no study has been made on soil property and variability and no information is available on general soil status regardless of land use. The unavailability of such vital soil information has created challenges in designing appropriate and area-specific soil fertility management interventions (Yared et al., 2021). Therefore, the objective of the study was to assess and analyse the spatial variability of some selected soil chemical properties of different land uses and cover in lower Wabi-shebele sub-basin in Somali region of south-eastern Ethiopia.

This study was carried out in the Somali regional state of Shebelle zone comprising of four districts in south-eastern Ethiopia: Gode, Kelafo, Ber’ano and Addadle. All mentioned districts were under the lower Wabishebele sub-Basin. 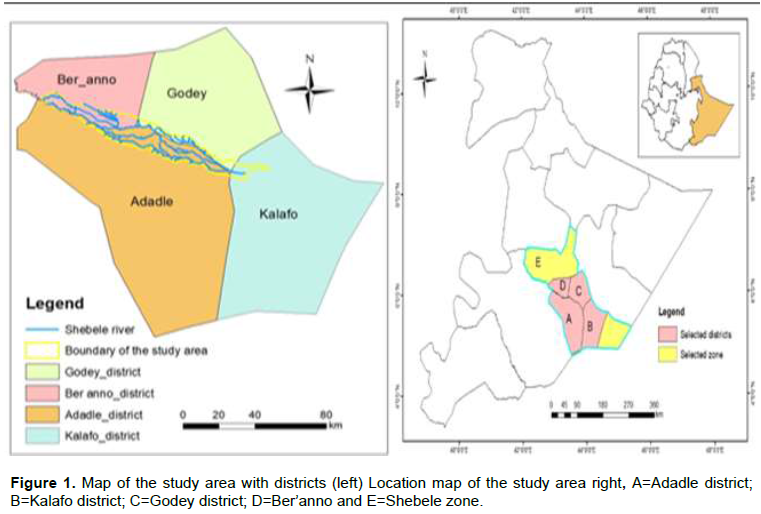 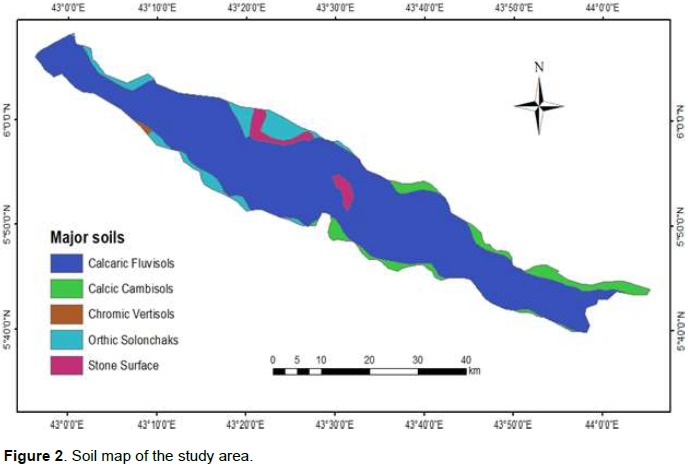 Descriptive statistics such as minimum, maximum, mean, standard deviation, and coefficient of variation (CV) values of the entire data set of measured soil properties were calculated using SPSS 19 ver. Geo-statistical analysis has been performed to interpolate the values of un-sampled locations and produce maps of soil properties for the different land uses and covers. ERDAS-2010 and Arc GIS-10 software was operated to prepare the spatial soil chemical variability, land use, and cover map of the study area.

Land use and cover of the study area

The result of land use and land cover of lower Wabi-shebele basin was expressed in (Figure 3). According to the result, the largest land cover was found to be fallow land or potentially irrigable land had it had coverage of 35.3%. Similarly cultivated land had coverage of 19.66%, the rest that is, bare land 18.56%, sparse shrub land 10.61%, woodland 10.56% and dense shrub land 5.31%. The result revealed that there is a significant land (49, 942.8 ha) which could be used for irrigation but not utilized yet. As a result, the soil nutrient status, content and other characteristics should be evaluated so that it could be utilized to tackle food insecurity of the region and the country as well (IEGNWRC, 1973). 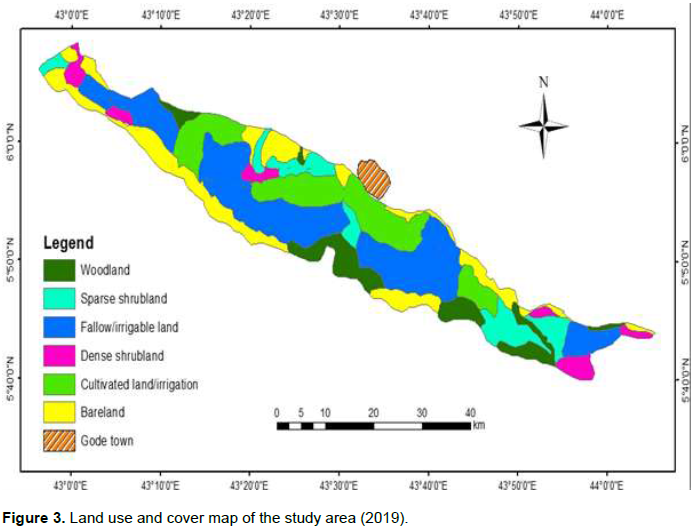 Description of chemical properties of soils

According to the result, the soil pH showed very low variability (CV=1.64% to 4.46%) under different land uses and it was found to be moderately alkaline to alkaline. When the highest pH recorded from bare land and the lowest was recorded from dance shrub land and woodland. Furthermore, the result of the pH revealed that high pH value was recorded at north-western part of the sub-basin whereas low pH values were found at southern periphery of the sub-basin.  Crop land and potential crop land had similar pH range and it was found to be slightly alkaline (Table, 1). Despite slight spatial variation, the soil pH of the sub-basin classified as slightly alkaline to alkaline soil pH values pH (Figure 4 and Table 1). 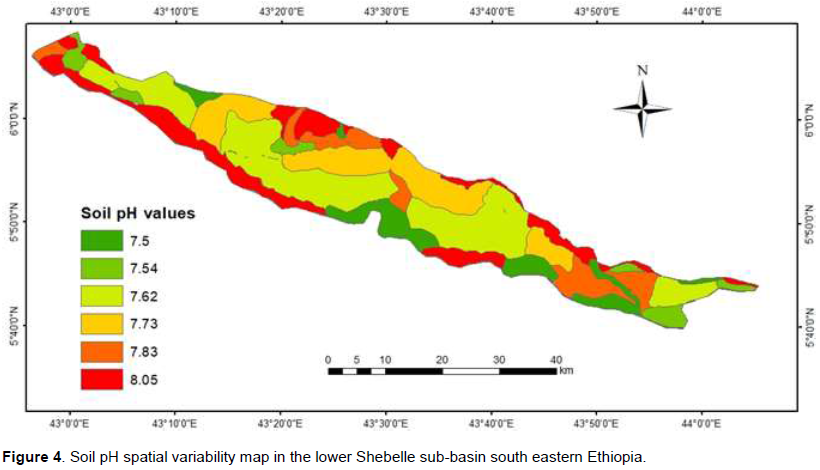 The findings in the current study corroborates with that of  Debela et al. (2011) who reported that pH value between neutral and alkaline pH ranges for different land use in semi-arid lowland areas of north-eastern Ethiopia. Similarly Gebrejewergs et al. (2019) indicated that low precipitation, high value of exchangeable Ca+ and high evapotranspiration that resulted in low losses of base from soil profile which resulted in the high soil pH values.

The results on soil TN showed that the potential cropland had relatively higher TN content followed by wood land and dense shrub land, cropland, sparse shrub and bare lands (Table 2) (Figure 5). In general majority of the lower Wabi-shebele sub-basin (82%) had medium soil TN and while small portion (18%) of the sub-basin found to be low soil TN. Similarly the north-western part of the sub basin generally had exhibited medium soil TN content; while the central part of the area showed lower nitrogen content. The result indicted that variation in soil TN content was highly influenced by landuse and land cover (Table 2 and Figure 5). The highest TN value was recorded from potential cropland followed by dens shrub land while the lowest recorded from bare land and cropland respectively.

The lowest N in bare and cropland could be resulted from reduced organic matter content of the soil due to the absence of vegetation cover and due to low nutrient cycle (Wondimagegne and Abere, 2012). Current finding corroborates with the findings of Sebhatleab (2014) who reported that the lower organic matter in farm and bare lands compared to forest and grasslands consequentially resulted in low N. similarly Sabiela et al. (2020) indicted that very low value of soil TN observed under cultivated lands may be due to continuous cultivation, soil erosion, plant uptake, and volatilization of Nitrogen. The result is also in line with the findings of Belayneh and Eyasu (2020)  who   reported  higher  TN  values  in  forest  land compared to croplands and grazing land uses. 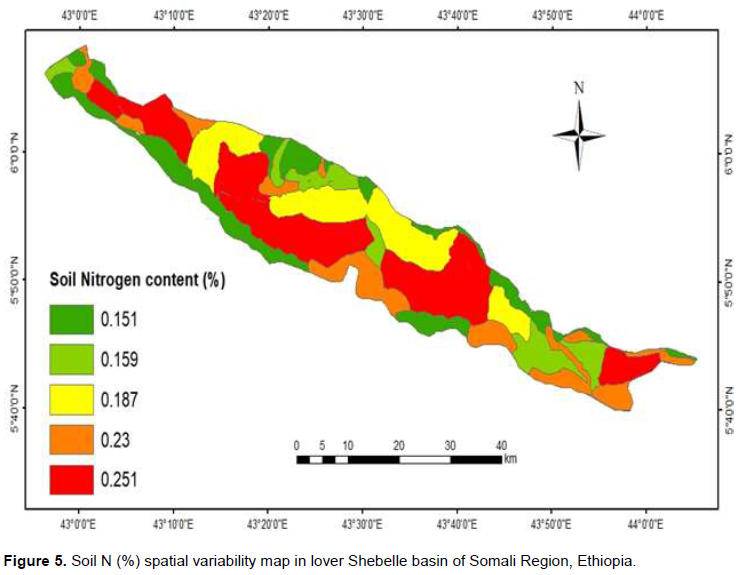 The results on AP in (Table 3) revealed that, there was certain variation for the different land use and  land  cover on the values of AP. The highest AP was obtained from dens shrub land followed by potential cropland and current cropland. The lowest level was recorded from bare land and sparse shrub land respectively (Table 3). Generally entire area under all land use and cover characterized as low level in terms of AP (Table 3 and Figure 6).  Despite  the  low overall AP content, there was variability in AP across different land use system. 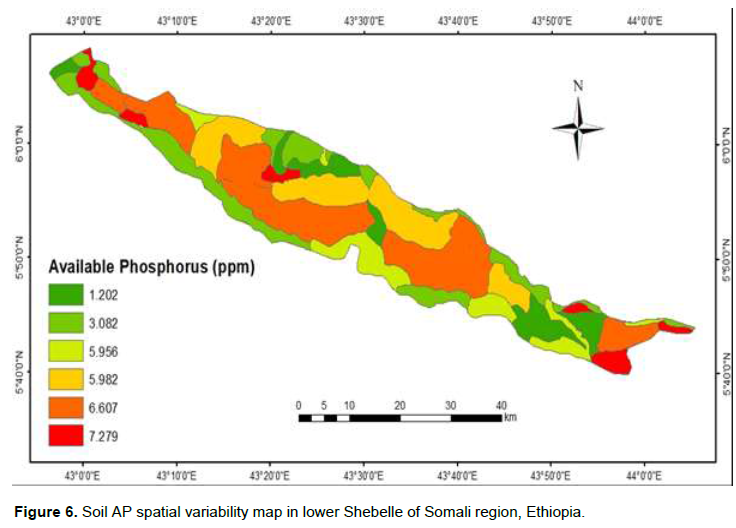 The highest AP in shrub land could be due to P return to the soil surface via litter fall to soil surface (Sabiela et al., 2020). The low soil AP content observed in the lower Wab-ishebele sub-basin is in agreement with the results reported by Fekadu et al. (2018) who reported that AP of most Ethiopian soils has been declining due to fixation, crop removal and erosion. Hence, the variation in this parameter might be caused by due to variation in land use and cover differences.

The AK content in current study area found to be low to medium and it was highly influenced by land use and cover (Tables 4 and Figure 1). In this parameter dense shrub land exhibited with higher mean value of AK followed by crop land and wood land. Similarly the lowest AP mean value was recorded from bare land, sparse shrub land potential crop land (Table 4 and Figure 7). This   finding   is   in   line   with   (Chauhan  et  al.,  2014; Sudarshan et al., 2018) who reported available (K) was significantly affected by the land use systems. Similarly Bista (2010) reported significantly higher K level in forest land than crop and bare land.   In general, the study area was dominated by medium (70.83%) and followed by low (29.17%) soil AP status.  The AK values observed in this study area were above the critical levels of (0.4cmol/kg) which is optimum range for many crops except for bare land and sparse shrub land.  Hence the AK value recorded in the sub basin from different land use found to be sufficient for the production of most crop plants. 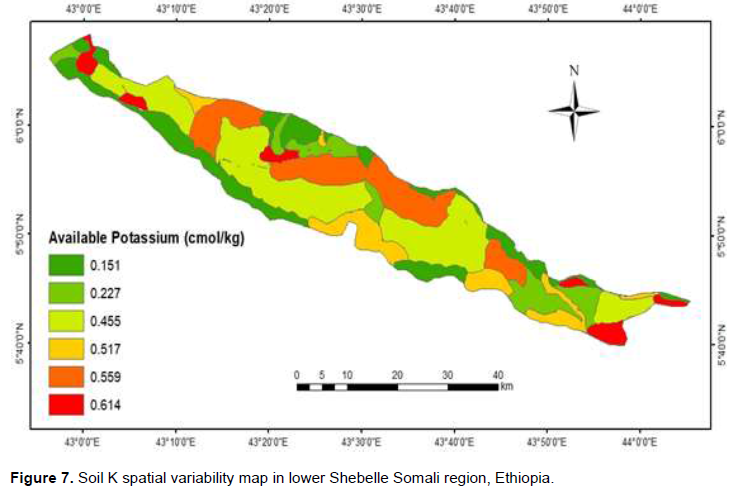 Therefore, based on the information obtained to properly manage the soils of the lower Wabi-shebele sub-basin according to the land cover and land use detail maps were generated. Soil productivity and other related problems of the sub-basin can be managed through implementation appropriate and area specific intervention.  As a result the findings of this study can be utilized as starting point for developing and implementing appropriate soil management intervention for soils of lower Wabi-shebele sub-basin in Somali region of South-eastern Ethiopia.