The objective of this study was to test for appropriate quantity of fertilizer (NPK 12-11-18) required to boost the production of cassava (variety TME 419) in the forest zone of Cameroon. The trial was conducted at the experimental farm of the Institute of Agricultural Research for Development (IRAD) in Mbalmayo. The experimental design was completely randomized block design in three replicates. The treatments were as follows: T0 (Control (No input)); T1 (200 kg.ha-1); T2 (300 kg.ha-1); and T3 (400 kgha-1). The data were analyzed using the IBM SPSS Statistics 20 Software. The results showed that chemical fertilizer improves the growth (number of leaves, plant height, and petiole length) and yield (number of marketable root, yield) of cassava mainly because it enhances soil nutrient availability. Thus, NPK-fertilizer significantly (p<0.001) increased petiole length by 20.71, 27.83, and 31.62% for T1, T2, and T3, respectively at 5 months after planting (MAP). The highest plant height and number of leaves at 4 and 5 MAP was observed with T3 followed by T2 and T1. Similarly, the highest root yield (43.33±10.97 t.ha-1) was observed with treatment T3. Hence, the fertilizer application rate of 400 kgha-1 of NPK 12-11-18 appears most appropriate for intensification of cassava production in the humid forest agro ecological zone of Cameroon.

Indeed, large areas of sub-Saharan soils including Cameroon are affected by various types of degradation including soil fertility decline (Ngome et al., 2011). Nutrient balances are largely negative and symptoms of nutrient deficiencies are widespread (Temegne et al., 2015). This phenomenon is exacerbated by intense cultivation (Nambiro, 2008), poor residue management (Ngome, 2006) and poor access to mineral fertilizer due to high unit cost and irregular supplies. Additionally, there is limited use of organic manure because of high land and labor requirements. Fertilizer application has a great potential to ameliorate the nutrient content of degraded soils and enhance plant nutrient uptake (Ngome et al., 2011). It is thus hypothesized that an increase in soil fertility could enhance crop productivity. Therefore the objective of this study was to investigate the appropriate amount of NPK fertilizer required to boost cassava production in the humid forest agro ecological zone of Cameroon, which is characterized by poor ferralitic soils.

The study was carried out between April 2018 and April 2019 at Mbalmayo (Figure 1), Nyong and So’o Division of the Centre Region of Cameroon. The area is found in the humid forest agro-ecological zone, characterized by poor ferralitic soils, a bimodal rainfall pattern, with four seasons: long rainy season from September to November, long dry season from December to February, short rainy season from March to June, and short dry season from July to August. The average daily temperature was estimated at 20 to 29°C and 1,700 mm was an average rainfall recorded during the experimental period (IRAD, 2018; IITA, 2018). 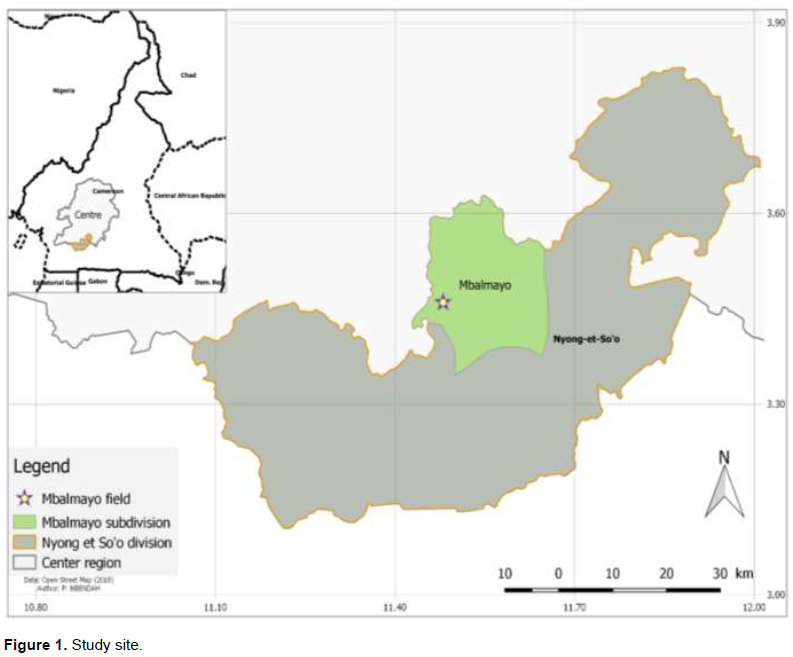 Before seed-bed preparation, a composite sample of the top soil (between 0 and 15 cm depth) was obtained from a mixture of ten samples collected from the field with an auger following the transect method (Okalebo et al., 2002). Portions of the composite soil sample (about 200 g) were analyzed in the laboratory for physical and chemical characteristics. Soil sample was air-dried and ground to pass through a sieve (2 mm). For carbon (C) and nitrogen (N) analysis, soil was further fine ground to pass through a 0.5 mm sieve. Soil pH in water, was determined in a 1:2.5 (w/v) soil: water suspension. Exchangeable cations (Ca, Mg and K) were extracted using the ammonium acetate (NH4OAC, pH: 7) and determined by flame atomic absorption spectrophotometry. Organic C was determined by chromic acid digestion and spectrophotometric analysis (Heanes, 1984). Total N was determined by a wet acid digest and analyzed by colorimetric analysis (Anderson and Ingram, 1993). P was extracted using Bray extractant and the resulting extract analyzed using the molybdate blue procedure (Ngome, 2006). This soil analysis was done in the Analysis Laboratory of Soils, Plants, Fertilizers and Waters of the Institute of Agricultural Research for Development (IRAD) of Nkolbisson-Cameroon.

The soil was acidic, low in organic carbon content and total nitrogen (Table 1).

The plant material used was an improved cassava variety namely TME 419. It is tolerant to drought, African cassava mosaic disease (CMD) and cassava bacterial blight (CBB) with an average yield between 21 and 52 t.ha-1 of fresh root, and a dry matter content of42% (IITA, 2018).

Implementation of the test

The number of leaves, plant height, and petiole length were measured at 3, 4, and 5 months after planting (MAP). At harvest (12 MAP), the number of commercial roots and total root yield (t.ha-1) was evaluated.

The obtained data were tested for normality using Kolmogorov-Smirnov and Shapiro-Wilk tests and for homogeneity of variances using Levene test. The collected data were treated by analysis of variance (ANOVA) with the IBM SPSS Statistics 20 software using one way test (one factor). Means comparison was done using Student-Newman-Keuls test at 5% threshold. Pearson correlation test was done to highlight the relationships between some studied parameters.

NPK fertilizer significantly improved (p<0.001) the production of leaves in cassava over time (Table 2), irrespective of the rate of application. Thus, 3 MAP, the number of leaves was significantly the highest at T3; it was followed by T2, then T1; T0 showed the lowest number of leaves. The same observation was made at 4 and 5 MAP. 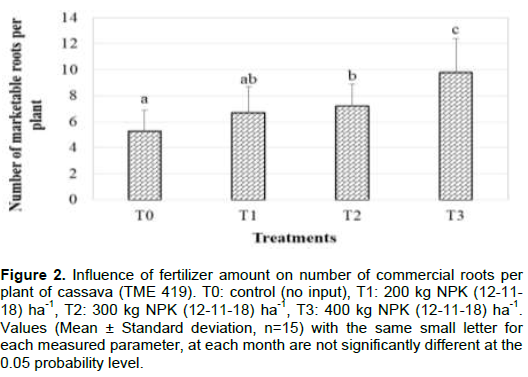 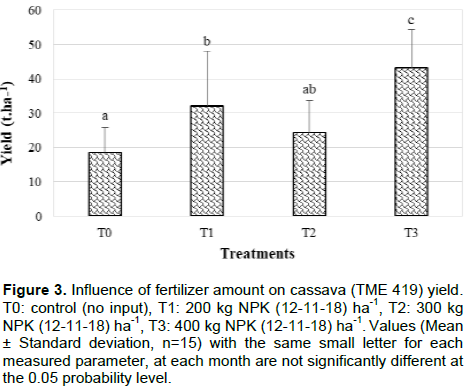 The different levels of chemical fertilizer (NPK 12-11-18) significantly improve the growth (number of leaves, plant height, and petiole length), the number of commercial root per plant and the root yield of cassava. The control (no input) plants of cassava recorded the shortest plants, the lowest number of leaves with the least petiole length. Indeed,  many  studies  showed that the cassava respond to inorganic fertilizer use. The obtained results corroborates with those of Temegne and Ngome (2017) in Cameroon, Ukaoma and Ogbonnaya (2013) in Nigeria, and Akanza and Yao-Kouame (2011) in Côte d’Ivoire.

The positive response of growth traits to chemical fertilizer (NPK 12-11-18) is due to their role in cell multiplication and photosynthesis, resulting in an increase in the size and length of leaves and stems (Uwah et al., 2013).

The results obtained confirm the effectiveness of the fertilizer type (NPK 12-11-18) chosen for this test compared to others on the market (NPK: 20-10-10, 14-24-14,  etc).  Indeed,  cassava  plants  consume  more  K than N and P (Temegne and Ngome, 2017). Adjanohoun (2006) noted that the amount of K extracted by cassava plants is more than twice that of N. A high N supply leads to an excessive foliage production and small roots by the plant. K plays an important role in photosynthesis, it also enhances the circulation of the ascending sap in the xylem and descends into the phloem and permits the transfer of assimilates (amino acids, sugars) to roots and reserve organs (grains, fruits, tubers). P also plays an important role in plant production. It promotes root development and increases the mass of roots, favoring nutrition and plant.

The average root yield was higher at T1 (200 kg NPK ha-1) than at T2 (300 kg NPK ha-1). This result could be explained by the fact that some tubers from one of the three plots allocated to T2 treatment were attacked by rots.

The highest amount of applied NPK (400 kg. ha-1) fertilizer used in this study did not reduce the yield of cassava roots, contrary to those of Ukaoma and Ogbonnaya   (2013),   who   found   that  a  high  fertilizer application may result in a reduction in root yield. This is possibly because the level of inherent fertility of the ferralitic soil was very low and thus required high application rates to raise the level of nutrients to optimal levels.

The results of this study showed that chemical fertilizer NPK (12-11-18) has a positive effect on cassava growth and yield. The application rate of 400 kg ha-1 of NPK (12-11-18) appears appropriate for the intensification of cassava production in the study area. However, it would be desirable to test in future work the effect of NPK rates above 400 kg.ha-1 on cassava yield. Given the very high prices of chemical fertilizers, future studies are also warranted to evaluate combined use of organic and chemical NPK fertilizer for cassava production.

The authors thank the Institute of Agricultural Research for Development (IRAD) and PIDMA (Agriculture Investment and Market Development Project) for their support.