A parasite study was conducted from August 2004 to July 2005 to highlight the distribution of gill Monogenean parasites from Oreochromis niloticus. A total of 370 fish collected from Ayamé man-made Lake, Côte d’Ivoire were examined for Monogenean species using routine parasitological techniques. The study revealed the presence of six species of Monogeneans (Cichlidogyrus thurstonae, Cichlidogyrus halli, Cichlidogyrus tilapiae, Cichlidogyrus rognoni, Cichlidogyrus cirratus and Scutogyrus longicornis). These species showed an aggregate pattern within the host population. Four species of parasites showed positive and significant correlation with parasitic abundance and the relative condition factor. The prevalence and intensity of the infection of these parasites were highest in the long rainy season and lowest in the dry season. The large sized fishes were more subjected to parasitic infection than smaller ones. In contrast, no sex effect was observed on the infestation of O. niloticus by the Monogeneans. No preference for the right or left side of the fish host was observed and the parasite species mostly colonized the middle arches (II and III). This could lead to more informed aquacultural practises, and maximization of the production of O. niloticus.

Monogenean trematodes belong to one of the most species-rich classes of fish parasites. They are commonly found on fish gills and skin. Nevertheless, some Monogenean species invade the rectal cavity, ureter, body cavity, nostrils, intestine, stomach and even the vascular system (Rohde et al., 1992; Pariselle and Euzet, 1998; Whittington et al., 2000). Their life cycle involves only one host and they mostly spread by way of egg releasing and free-swimming infective larvae (Öztürk and Özer, 2014). In the natural environment, Monogeneans are often in equilibrium with their hosts, and can cause serious morbidity and mortality during fish breeding (Buchmann and Lindenstrom, 2002; Kayis et al., 2009; Strona et al., 2010) resulting in significant economical losses (Ghittino et al., 2003; Johnson et al., 2004; Boungou et al., 2008; Velloso and Joaber, 2010). The Nile tilapia, Oreochromis niloticus, indigenous to the Nile basin, plays an important role in aquaculture globally(Akoll et al., 2011) could face such problem. This fish has a great economic interest in Côte d’Ivoire (Gole-Bi et al., 2005). Indeed, the total annual yield of inland fisheries estimated at 18 000 tons are essentially dominated by Cichlidae, notably O. niloticus which represents between 50 to 70% of the total catches (Gole-Bi et al., 2005). 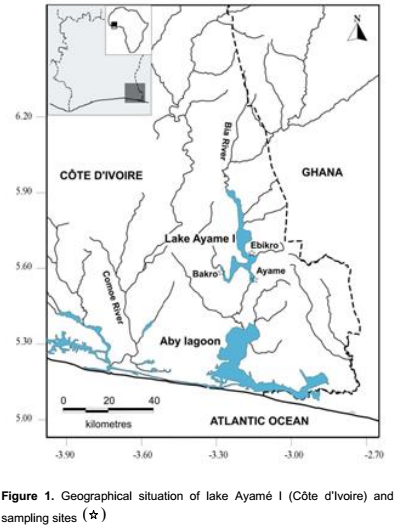 The Food and Agricultural Organization of the United Nations (FAO, 2009) reported that, to satisfy an increasing demand in freshwater fish, extensive research must include studies of their parasites for optimal production levels. The knowledge of fish parasites is of particular interest in relation not only to fish health but also to understanding ecological problems (Sures, 2001; Dudgeon et al., 2006). Baseline data, collected from infections within natural water systems, serve as reference point for management strategies.
In tropical Africa, Monogeneans parasites are mostly known in their taxonomical aspect (Pariselle and Euzet, 2009) and specificity and biological cycle (Aloo, 2002; Tombi and Bilong Bilong, 2004). Studies concerning eco-biological aspects of these parasites are scarce (Nwani et al., 2008; Keremah and Inko-Tariah, 2013, Tombi et al., 2014). To the best of our knowledge, there has only been two ichthyoparasitological studies (Blahoua et al., 2009, 2015) on infection dynamics of gill Monogenean parasites of Ivoirian fish.
Here we present some eco-biological aspects of Monogeneans’ gill parasites of Oreochromis niloticus in Lake Ayamé I, Côte d’Ivoire.

Study area
Lake Ayamé I, the oldest hydroelectric dam of Côte d’Ivoire being commissioned for hydroelectric generation in 1959 (Reizer, 1967) has an average surface of 90 km2 and its maximum depth is 20 m (Gourene et al., 1999) (Figure 1). The reservoir is situated at 3°-3°5’ W, 5°30’-6°N in the Southeast of the country. The climate of lake area in the Bia watershed is an equatorial transition zone with two rainy seasons separated by a short dry period in August and September and a more pronounced dry season from December to March. The lake is characterized by two high water level periods, April to June and September to November (with maximum discharge of about 500 m3 s-1). Conversely, low water level periodsare December to March and July to August (with a minimal discharge of about 0.13 m3 s-1). Mean annual water surface temperature in the reservoir is 28°C (Ouattara et al., 2007). Water surface temperature varied from 25.9 to 26.2°C during the small rainy season and from 29.8 to 32.7°C in the long rainy season (Blahoua et al., 2009). The average dissolved oxygen and water transparency ranged between 2.8 to 15.4 mgl-1 and 550 to 1371 mm respectively (Nobah et al., 2008).

Fish sampling and parasitological analyses
From August 2004 to July 2005, a total of 370 O. niloticus individuals were collected from the described three main landing sites every month, during 3 to 4 days per site. Fishing was done with multi-meshed nylon gillnets (8 to 90 mm mesh sizes). Each gill net measures 30 m long by 1.5 m deep. Nets were set overnight (17 to 07h) and during the following day (07 to 12 h).
Once out of the water, the fish were immediately identified following Teugels and Thys van den Audernaerde (2003) keys. The weight of the fish were taken using digital weighing balance and recorded. The standard length (SL) of each specimen was measured to the nearest 1 mm on a measuring board. The effect of the parasites on the health status of the fish host was investigated from Fulton’s condition factor (K-factor) with the following Formula: Kc= W x 105/L3, where W is the weight (grams) and L the standard length of fish (millimeters) (Klemm et al., 1992). The fish sample were divided into four different length classes of 50 mm amplitude, which are: Class I (50 ≤ SL < 100), class II (100 ≤ SL < 150), class III (150 ≤ SL < 200) and class IV (200 ≤ SL ≤ 250). Fishes were killed by a single cut through the spinal cord and dissected to determine their sex. Subsequently, gill arches on each side were removed fresh from bucco-pharyngeal cavity by dorsal and ventral sections and then stored in ice (0°C).
At the laboratory, each gill arch was placed in a separate Petri dish containing water, and examined for Monogenean parasites under a binocular microscope (Olympus SZ 60). Gill arches from each side of the fish were numbered I-IV from the anterior portion of the gill arch below the operculum to the posterior. Individual worms were collected and mounted on a slide in a drop of ammonium picrate-glycerine mixture (Malmberg, 1957). The identification of the parasite species observed were done with a microscope magnification of 400 and 1000X, on the basis of available taxonomic characters as described by Pariselle and Euzet (2003, 2009).
The total number of parasites counted from the entire gill section was expressed in terms of prevalence, abundance and mean intensity following the formula proposed by Bush et al. (1997). Aggregation was calculated using dispersion index (S2/x) to determine distribution pattern of parasites (Poulin, 1993; Shaw and
Dobson, 1995).
Statistical analysis
The Sperman’s correlation coefficient “rs” was used to investigate correlations of abundances of parasites with the relative condition factor of the hosts (Zar, 1996). The Chi-square (χ2) test was used to compare two or more proportions (prevalence) of samples. Analysis of variance and Student U test were used to determine the existence of any meaningful difference in mean intensity of the parasites species. Statistical significance level was evaluated at of 5% using STATISTICA 6.0.

Monogenean parasite species composition
Six species belonging to two different genera: Cichlidogyrus (C. thurstonae Ergens, 1981; C. halli (Price and Kirk, 1967); C. tilapiae Paperna, 1960; C. rognoni Paperna, 1964; C. cirratus Paperna, 1964) and Scutogyrus (S. longicornis (Paperna and Thurston, 1969)), were collected on the gills of Oreochromis. niloticus. Prevalence, mean intensity and the aggregation index are reported (Table 1).These data revealed that all the Monogenean parasites adopted an aggregation distribution (variance is greater than mean intensity).
Four of the six parasites species (C. thurstonae, C. halli, C. tilapiae and S. longicornis) studied have an abundance significantly and positively correlated with the condition factor of the fish (rs = 0.73, 0.69, 0.59 and 0.38, respectively, pË‚ 0.05) (Table 2).
Temporal variation of the occurrence of the parasites
C. thurstonae occurred on the host population during all the study period. A bimodal curve showed its maximum prevalence (100%) in October and November 2004 (small rainy season) and from April to July 2005 (long rainy season). The lowest infestation rate (60.9%) was recorded in February 2005 (long dry season) (Figure 2). The prevalence variations during the four seasons were significant (χ2 = 70.3, df = 3, p < 0.05). Mean intensity values varied from 11.2 ± 1 in February 2005 (long dry season) with a peak of 61 ± 2.1 in June 2005 (long rainy season) (Figure 3). This variation curve was similar to the prevalence one. Significant difference was found in intensity of infection between seasons (Analysis of variance, F = 53.4). Parasitism changed from one season to another (Student, p < 0.05) (Table 3).
Scutogyrus longicornis, Cichlidogyrus tilapiae and C. halli were also present during the year of study. The prevalence variations of these parasites were similar to that of C. thurstonae but the values remained a little lower compared to the first one. For S. longicornis and C. tilapiae, the lowest prevalences (13 and 21.7%) were found in February 2005 (long dry season) and the highest (70 and 73.3%) in June (long rainy season), respectively. The number of fish infested by C. halli ranged from 43.5% in February and March 2005 (long dry season) to 96.7% in June (long rainy season) (Figure 2). The infestation showed a clear seasonal pattern (χ2 = 56.6 and 54.7 and 80.3, df = 3, respectively, p < 0.05). The mean intensity reached the highest values 10.5 ± 0.7, 11.9 ± 0.8 and 26.4 ± 1 in November 2004 (small rainy season) and 13.1 ± 0.5, 16.8 ± 1.1 and 27 ± 1.6 in June (long rainy season), respectively (Figure 3). The statistical analyses revealed that the infection of this host with these three parasites differed significantly between seasons (Analysis of variance, F = 16.1 and 27.7 and 76.9, respectively, df = 3, p< 0.05). There was also significantly difference from one season to another (Student test, p < 0.05) (Table 3).
For Cichlidogyrus cirratus and C. rognoni, the prevalence of infestation (varied from 3.8% in December (long dry season) to 36.7% in June (long rainy season) and from 4% in January (long dry season) to 50% in June (long rainy season), respectively. There was a lack of parasites in February and March 2005 (Figure 2). The Chi-square (χ2) applied to the temporal variations of the occurrence of these parasites showed that these values were statistically significant at 5% (χ2 = 38.1 and 41.7, df = 3, respectively). In both species, the highest mean intensities were recorded in November 2004 (small rainy season) and June 2005 (long rainy season). The values of mean intensity of C. cirratus were 4.4 ± 0.8 and 5.2 ± 0.5 then 6.4 ± 0.4 and 7.1 ± 0.6 for C. rognoni, respectively (Figure 3). Seasonal changes of mean intensity of infection followed the seasonal pattern of prevalence (Analysis of variance, F = 18.7 and 16.2, respectively, df = 3, p < 0.05). Intensity of infection changed from one season to another except from the small to the long dry season (p <  0.05) (Table 3). 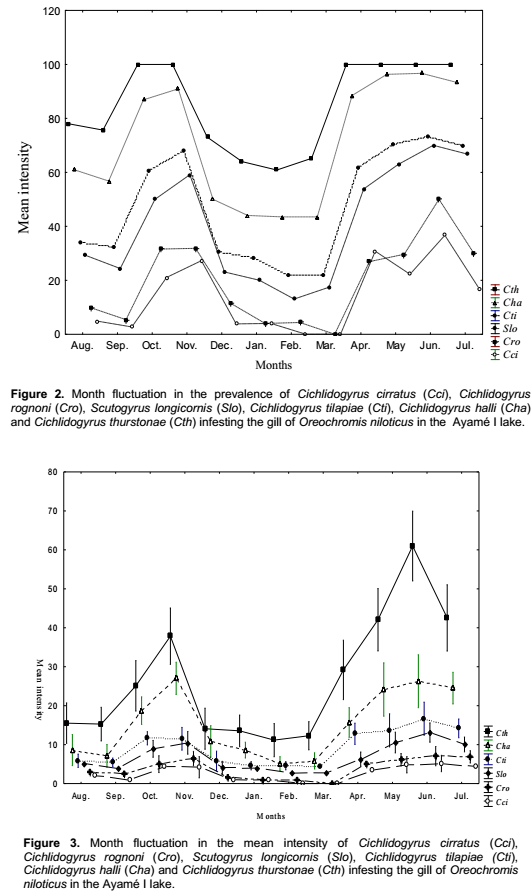 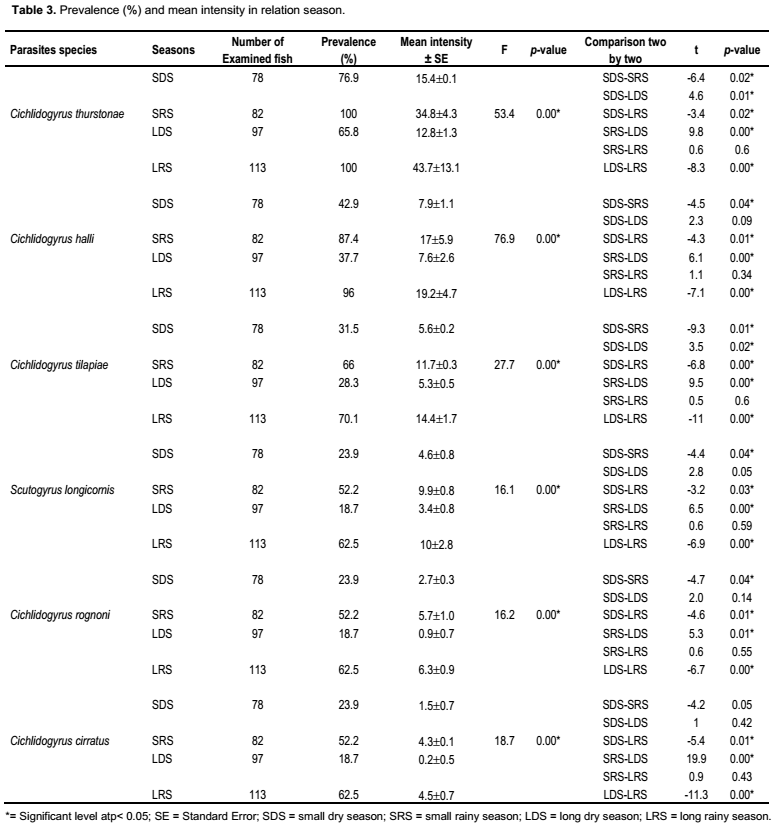 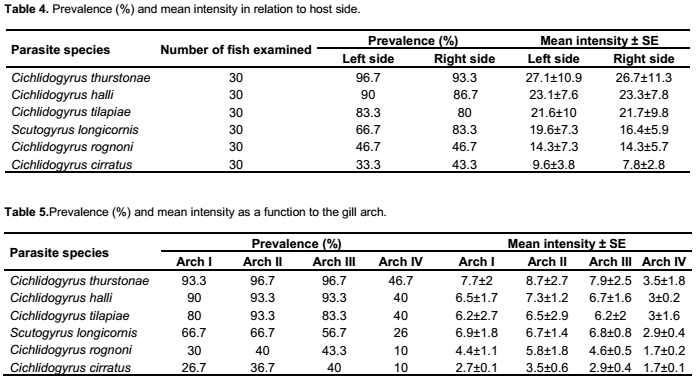 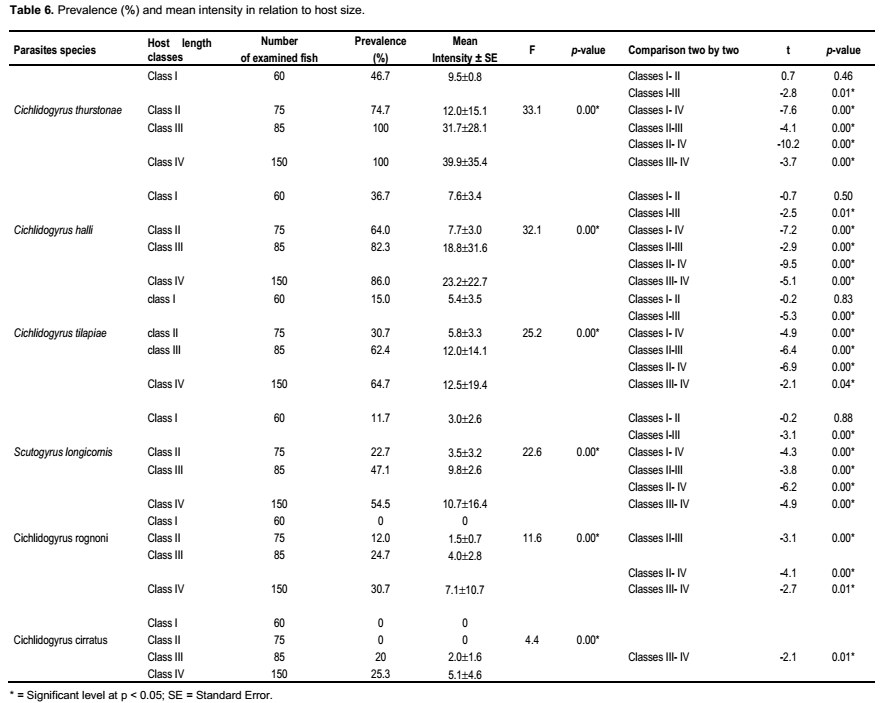 This study adds to a further understanding of Monogeneangill parasitizing O. niloticus in a natural water system. This could lead to more informed aquacultural practises, and maximization of the production of O. niloticus.