A research study was conducted on Tamarix aphylla in August, 2008, in the experimental area of Department of Forestry, University of Agriculture Faisalabad, Punjab to find out the impact of vegetative propagation of Farash (T. aphylla) through different size of cuttings in open air and under low polytunnel. In this study, 2", 4" and 6" long cuttings were planted in shade in polythene bags, with nine holes, 3" wide and 7" long, made in each bag for irrigation purpose. The data was recorded twice a month on sprouting percentage, height of plant, root length and number of root branches for two months after initial planting in the month of August. Sprouting percentage and height of plants were maximum in T3 (6" long cuttings) and minimum in T1 (2" long cuttings) in both open air and low polytunnel, but overall the success rate was much higher under the low polytunnel. The measurement of roots length and number of roots branches was maximum in T1 than T3, in open air and low polythene tunnel.

Study site
The experiment was carried out at experimental area of the Department of Forestry, University of Agriculture Faisalabad. Latitude 36 to 26° and Longitude 73 to 06°E.
Cutting preparation and planting
Three different sizes of branch cuttings (2", 4" and 6" long) of Farash (T. aphylla) were prepared from six-year-old healthy trees in the first week of August 2008. These cuttings were then planted and irrigated immediately in the polythene bags of 3" × 7" size which were filled with sandy loam soil. Half of these bags were placed in the open air, while the remaining half was placed under the low polytunnel. There were two experiments (open air block and under low polytunnel block) were organised in accordance with Randomized Complete Block Design (RCBD) with three replications each. The data on sprouting percentage and height of plant were recorded after 15, 30, 45 and 60 days but root length and root branches data was recorded right after 60 days. There were three treatments in each replica and three treatments were labeled as T1 for 2" long cuttings; T2 for 4" long cuttings and T3 for 6" long cuttings. There were 50 polythene bags in each treatment (T1, T2 and T3) which makes 150 in each replica of open air and under polytunnel, making a total of 900 bags for the whole experiment. The data were subjected to analysis of variance and comparison among the treatments by the Least Significant Difference Test at 5% probability level (Steel et al., 1997).

Sprouting percentage
It is vital to find out the  survival  percentage  of  plants  by the propagation of different size of stem cuttings in different environmental conditions. The maximum sprouting after 15 days was observed in T3 (77.55%) under polytunnel while in open air it was only 29.10% (Table 1). Overall, after 30 days, there was a negligible increase in the sprouting percentage, thus thirty days are adequate for assessing sprouting. The results of the present study showed that the cutting size and polythene cover influence the sprouting of tree cuttings at nursery stage. These findings are also in line with those of Mebrathu and Hanover (1990), Cobbina (1990), Haq (1992), Mitchell (1998), and Trujillo (2002). 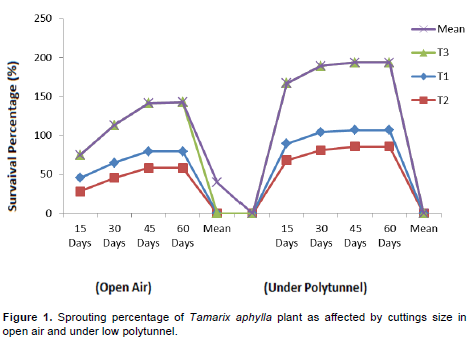 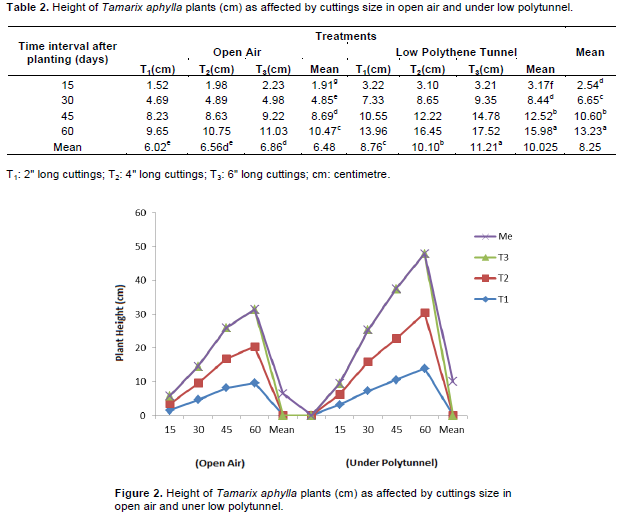 Root length (cm)
The maximum root length of 20.14 cm was recorded in T1 (2" long cuttings) under polytunnel. Even the mean value of T1 in open air and under polytunnel is 19.63 cm which is higher than T2 and T3 mean values which are 18.67 and 18.24, respectively (Table 3). Length of roots were much better grown in the plants under low polytunnel (mean value 19.56 cm) than in the open air (mean value 18.14 cm) (Table 3). The results from T1 shows that root length can be developed in a better way, under polytunnel (Figure 3). The reason might be conservation of moisture and heat/temperature under the sheet cover, enhancing growth of plant roots. These results agree with the findings of Trujillo (2002). 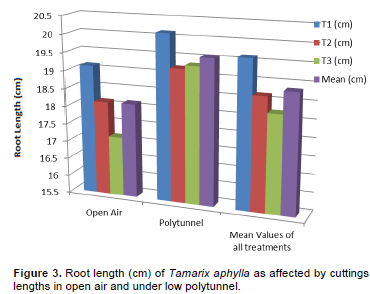 Root branches
The numbers of root branches were counted immediately after the completion of 60 days. The maximum number of root branches (21.23) were produced by T1 (2" long cuttings) in open air (Table 4). On the other hand, plants grown under polytunnel had slightly less root branches (18.75) than in open air. It is shown (Figure 4) that  T1  (2"
long cuttings) in open air produced more roots than the the longer cuttings possibly because there was more space available to grow for them as compared to larger cuttings. Irfan (2011) concluded that 2" long cuttings produced more branches than others and in different mediums. Different researchers have previously observed that shorter cuttings lead to the development of more and better roots (Foster et al., 2000). It shows again the success rate of T1 with the number of root branches (mean value 19.99) is higher than other treatments (T2 and T3) is as similar to the results of measurement of roots length. 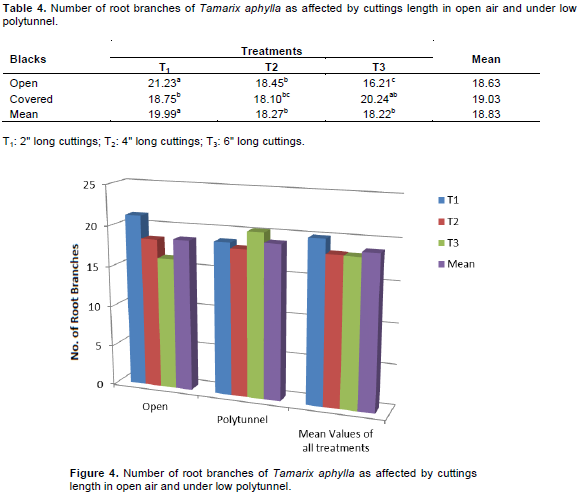 Although seedlings still costs less in most regions of the world, propagation through cuttings could be the best alternative to it to prepare more vigorous plants and more flowering in some cases in less period of time. The overall growth of plant cuttings under polytunnel was better as compared to the open air. The reason that under polytunnel, moisture was conserved and proper temperature for plant growth was maintained which resulted in the best results of sprouting percentage, plant height and root growth except the number of root branches. The numbers of root branches were higher in the open air than under low polytunnel which can be the result of small space available. All the growth parameter indicates that the performance of T3 treatment (6" long cuttings) is better than all other sizes of cuttings. So, keeping in view the conclusion, planting of 6" long cuttings of T. aphylla under low polytunnel is recommended for nursery raising.