The study was conducted in Borana zone, which is located at about 570 km from Addis Ababa with the objective of understanding the farming system of Borana pastoral area. The primary data was collected using survey questionnaires from 160 households selected using multistage sampling design. The study confirmed that the farming system in Borana pastoral area has been increasingly diluted, unlike the earlier decades where livestock were used to stand as the backbone of their economy. The inference from the sample household indicated larger portion of their livelihood is crop-livestock integration dependent, unlike the conventional account. Even though the livelihood diversification is possible to reduce the risk agriculture, in the study area the diversification into crop farming could intensify further devastation of nature by diverting attention to other livelihood option resource if care is not in place. Practically, owned to decline in livestock productivity, it enforced the pastoralists to enhance the trade-off between crops-livestock production or its integration. The survey result also displayed that about 85% of the respondent has been producing at least one crop besides the livestock production. This induces a critical question on the existents of the pastoralists if sustainable livelihood of the pastoralism is not in concern. However, owned to the critical importance of the pastoral system, interventions to enhance the pastoral livelihood need urgent measures. Furthermore, this study recommends for further deep analysis on optimization of the livelihood diversification in pastoral area for enhancing sustainable livelihood.

Livestock has been the main backbone of the pastoral economy from a long history. However, climate variability is the greatest recurrent threat to the livestock production (Angassa and Oba, 2007). It has been naturally reducing the  livestock   asset   accumulation   of   the   pastoralists recurrently with an intensified frequency of the event. As a result, Borana pastoralists are much poorer today than they were in decades, as livestock a person has declined from 4.1 to 2.3 TLU and more recently found 1.9 TLU (Bati,  2014).  The decline  in  livestock  per  person  over the years is, however, suggests the decline in the pastoral economy.

Later, various livelihood alternatives have been emerged to overcome the risk of climate variability (Coppock, 1994). Acceptance of integrity and complementarily between crop and livestock becomes adapted unlike earlier decades (Tilahun et al., 2017). The anecdotal evidence shows that crop farming was started during the Goba Bule Gada, 1969‐1977 (Napier and Desta, 2011). However, crop failure is subsequently higher because of rain shortages and climate variability. It implies that the original livelihood system, pastoralism, was mixed with other alternate production system though the capability of the environment needs further analysis.

Particularly, most of the pastoralists strained to diversify into agricultural production (Angassa and Oba, 2007). They have been practicing small-scale crop farming to meet the unmet demand of food, even though it is gambling with climate variability. Crop production is characterized by frequent failure because of erratic rainfall beyond its unreliability. Increased cultivation, however, was attributable to declining of livestock of a person as worsened by human population growth (Tache, 2008). Unfortunately, lessening smaller herds from the poor pastoralists impels the permanent shift into farming.

However, the livelihood diversification into different alternatives remains to the conventional practices of the pastoralists. These efforts of the community are owned by the self-defense against chronic food insecurity regardless of its environmental outcome. Under current trends, the chronological shift from pastoralism to agro-pastoralism and then to the dryland farming and ranching is not too far, though the traditional livelihood is deeply rooted. However, it is very critical to understand the trade-off and trends of alternative livelihood systems in pastoral area. Thus, this study was undertaken to understand the shift of farming system in Borana pastoral area. 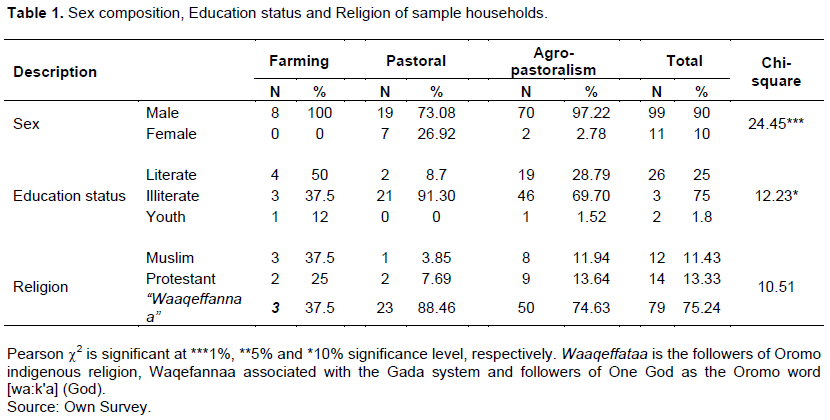 From all sample households, only about 28% can enable read and write in which some of the sample households have access through youth education provided by the government during the night and weekend (Table 1). From the sample households with the capacity to read and write, the respondents were attending a maximum of grade eight and about 1% of the sample households accessed the capacity to read and write through the informal education, zero education. From the chi-square output, there is a significant difference between the literate and illiterate on which the livelihood they are inclined to. Though there is no significant difference among the followers of religion on the choices of the livelihood, male-headed households, and illiterate households are more likely to diversify their livelihood alternative. The mark is that female household is hardly reluctant to shift their livelihood because of physical inability and emotional confidence (risk-taking). On the other hand, though education is an important tool for choosing a better livelihood alternative, the literacy services given to the elderly level are less likely focused on livelihood development.

The essence of pastoral farming system

A  farming  system  is  a   population   of   individual  farm systems that have broadly similar resource basis, enterprise patterns, household livelihoods, and constraints, and for which similar development tactics and interventions would be suitable, whereas the household, its resources, and the resource flows and interactions at this individual farm level (Dixon et al., 2001). In the study area, though there are various classifications of the farming system, lack of discrete boundary of classification makes it difficult to acquire data for further discrete analysis. For purposes of this study, the conventional livelihood practices-based-agro-ecology was adapted to characterize the pastoral farming system in Borana zone. Accordingly, the Borana zone could be classified as pastoralists, agro-pastoralists, and dryland farming system based on the traditional livelihood basis. Though it is difficult to assign an isolated definition of household within each farming system, scholars have assigned the subjective definition of each farming system. According to Rass (2006), "Pastoralists are livestock keepers living in the area which receives less than 400 mm of rainfall  a year with a growing period 0-75 days, where cropping is not practiced and driving more than 50% of agriculture from livestock rearing through opportunistic tracking on communal land. Similarly, agro-pastoral are livestock keeper earns more than 25% but less than 50% of agricultural income (that is it includes the value of own production consumed within the households) from livestock keeping on communal land in an area with an annual rainfall between 400 and 600 mm and growing periods of 75 to 90 days“ (Rass, 2006).

In the past 20 years, the shift from pastoralism to agro-pastoralism livelihood system is raised (Wassie and Fekadu, 2015). Before 20 years, the number of households practicing crop production is minor compared with 10 years after. Even before 10 years, the involvements of crop production have been low. However, because of various reasons, principally droughts, expansion of crop farming becomes a superfluous livelihood alternative. The low productivity of livestock (for example Milk) enforces the households to look for other income sources (Hurst et al., 2012).

The Chi-square outcome also showed the shift from pastoral to agro-pastoral livelihood is significant at 95% CI.  Livestock only based production decreasing over 20 years because of the involvement in farming become increasing (Figure 1). Though crop production has started before 20 years, most recently the trade-off between crop production and livestock production is now raised (Wassie and Fekadu, 2015).

The result hints that the shift of pastoral livelihood from the orthodox to the other extraneous livelihood alternative at the expense of the original livelihood becomes non-stoppable. Another study also confirmed that the shift from pure pastoralism to subsistence agriculture is the major concern in the Borana pastoral area (Boku and Sjaastad, 2008). This shift was dominantly because of recurrent natural and human-made calamities that limit the conventional pastoralism (Wassie and Fekadu, 2015). Drought, erratic rainfall, land degradation, and bush encroachments domineer the top challenges in the pastoral area coupled with expansion of farming land; deforestation, livestock population; unstructured settlement and farmland expansion add the limiting impact  on  a  livestock  production  (Negasa et al., 2014).

This proves that the expansion of dryland farming at the cost of the rangeland hint the declining of livestock dominated production.

On the other hand, Borana pastoralists are the original sources of Boran cattle, which laid an important foundation for improved livestock breed in the world. The trade-off from livestock to crop production bears an offensive load on the livelihood of the society.

However, analytical gaps in the future of the natural potential are an inquisitive point that needs further effort beyond this study. Nonetheless, the production of different crops was given due attention regardless of their awareness and access to seed and seedling. Irrespective of the area of production, seed sources, seed availability and producers' experience, pastoralists have been practicing at least staple crops such as maize and haricot bean. Nowadays, demands for crop production had already been fueled to fill unmated demand for food, even in the area suggested purely for pastoral households. The past study also confirmed that crop cultivation is firmly expanding in the rangelands and tenure is moving towards the de facto individualization (Boku and Sjaastad, 2008)

However, producers are hardly consuming Teff beyond production. It is considered as commercial, though its productivity is low. Nevertheless,  producers’  postharvest management challenges their income because of their low crop storage habit, Teff. Most commonly, the producers are tracked into the market immediately after harvest though high supply impels a low price. On the other hand, cattle dominate the inhabitants of livestock in Borana zone besides social heritage. The household survey also confirms that cattle are the top populous livestock followed by goat, sheep, and camel in rank where female livestock dominated the part of livestock sizes.

On average, households owned about 11 animals (TLU) where cattle cover 90% of the part. Though the livestock holding was small, still livestock production outweighs the livelihood of the pastoralists. Even though average camel holding seems high (only less than 10% of the respondents), more than 80% of respondents own cattle and small ruminant (Table 3). Figuratively, the inhabitants of the small ruminants outweigh the inhabitants of livestock, though the population of the cattle outweigh in TLU.

Climate variability is the greatest recurrent threat to the livestock production that has been naturally destocking the livestock asset at a cost of sustainable livelihood. Drought, erratic rainfall, land degradation, bush encroachments, livestock population, unstructured settlement, and farmland expansion have a limiting effect on a livestock production. However, the declining livestock per individual reflects eroding of the pastoral economy. This favors for the emergence of various livelihood choices to overcome the problems arising from impact of the climate change. Particularly, crop cultivation as a means of partial compensation for long-term trends of livestock restocking shares the lion option in the study area. However, the analytical gaps in the future of the natural potential are an important point that needs further effort beyond this study. Besides crop production, the population of small ruminants outweighs the population of livestock,  though  pastoralists  value  their  cattle more in history.

Still, the same drought is recurrently fighting the civil society, which has no suitable defensive tools to fight against it except the defeated traditional coping tactics. On the contrary, the human population and the environmental risk are still growing beyond the capacity of local adaptation strategies of livelihood diversification. As a result, the situation gradually multiplies the poor and poverty against the strategies of the country to lessen poverty in Ethiopia.

On the other hand, diversification hardly considers the problem of natural resources because of its planning. Similarly, though farm diversification is an important strategy; this study extends further investigation on enterprise optimization to improve the income of producers aligned with the applicable land use and land classification.