Assessing the effects of Lecanicillium lecanii in the biological control of early and late leaf spot of peanut in vitro (Burkina Faso, West Africa)

Early and late leaf spots caused by Cercospora arachidicola and Phaeoisariopsis personata respectively, are the most widespread peanut fungal diseases in West Africa. These diseases lead to notable crop losses in the rural area. In the recent decades, chemical fungicides are used to fight against crop losses, but these chemical substances cause big damages to the environment including the animals and human beings. Thus, the biological control is encouraged by scientific community and all government because it is well known to be safety and cost effective. For this reason, we investigated on the effectiveness of Lecanicillium lecanii on leaf spots of peanut in Burkina Faso. To do so, spore suspensions (106 spores / ml) from four strains of L. lecanii was used in vitro. The results revealed that L. lecanii 4181 inhibited the pathogen conidia germination up to 87%, as well as elongation germ tube with highest rate of 56%. Compared to the distilled water control, the severity scores vary between 5.7 and 8, but our results showed a notable decrease of score from 2.3 and 4.7. From our findings, the treatments with L. lecanii spore suspensions on peanut leaves significantly reduced the severity of leaf spots and may be potentially used to promote organic farming in West Africa.

Early and late leaf spots are the most common foliar diseases of the peanut. The most obvious effect of this disease is the loss of photosynthetic  tissue,  which  leads to premature defoliation. Early and late leaf spot contribute to significant loss of crops over the world (Subrahmanyam   et  al.,  1992;  Shokes  and  Culbreath,  1997). These diseases can cause up to 70% yield loss (Subrahmanyam et al., 1980). Previous studies havedemonstrated a significant impact of these pathogens in peanut farms in West Africa, particularly in Burkina Faso (Neya, 2017). Some authors have focused their activities on detecting resistant varieties, and the use of plant biopesticides (Koïta et al., 2017; Zongo et al., 2019). However, biological control of plant diseases is now considered as a promising tool for sustainable agriculture in rural area and may help to fight against poverty and hunger in developing countries. Some authors have demonstrated that the antagonistic fungi, such as Dicyma pulvinata (Berk. & Curt.) v. Ar x (= Hansfor dia pulvinata (Berk. & Curt.) Hughes) and Verticillium lecanii (Zimmerm.) Viegas (Lecanicillium sp.) can be used to fight against early and late leaf spots of the peanut, as well as Darluca filum (Biv.) (Cast.), Tuberculina costaricana (Syd.) and V. lecanii (Lecanicillium sp.) are used against peanut rust (Zambettakis and Sankara, 1985). In India, Subrahmanyam et al. (1990) have proven that V. lecanii parasitezed the uredospores of Puccinia arachidis (Speg.) and reduced the extent of rust and late leafspot on peanut leaves. Some studies in Burkina Faso were only limited to the biology and reproduction of L. lecanii (Nana et al., 2014). The main objective of this study was to evaluate the effectiveness of L. lecanii in the biological control of peanut leaf spots. To reach our goal, three specifics objectives were carried out: (1) to determine the effect of L. lecanii on conidia germination of pathogens, (2) to determine the effect of L. lecanii on the germ tube elongation of pathogens, and (3) to establish the severity scores of leaf spots.

The conidia of Cercospora arachidicola and Phaeoisariopsis personata were collected from infected peanut leaves at the centre part of Burkina Faso, named Gampela. The area is located at longitude 12°22 W and latitude 12°25 N. Once, the peanut leaves collected, they were preserved in blotting paper and closed in Petri dishes, and the samples were kept in laboratory at 25°C for one week. Then, the conidia of C. arachidicola and P. personata were gathered by using a scalpel after submerging the leaves in distilled water containing 0.02% Triton × -100. Conidia concentrations of pathogens were determined using Neubauer hemocytometer and adjusted with sterile water containing 0.02% Triton × 100.

Four strains of L. lecanii (4184, 2711, 1052 and 4181) were used as antagonist fungi in this study. These strains were gained from the National Museum of Natural History (MNHN) in Paris, France.

For the germination tests, the inoculum required for the experiments were obtained from 14-day-old cultures grown on potato dextrose agar (PDA) plates (Gurulingappa et al., 2010). The conidia were harvested by scraping the surface with a sterile scalpel after flooding the plates with sterile water containing 0.02% Triton X 100.

Testing the effect of L. lecanii on conidial germination and germ tube elongation

To do so, one milliliter of the conidial suspension of each pathogen (5000 conidia / ml) was added in 4 ml of L. lecanii containing 1.25 × 106 conidia / ml. The final solution was incubated in tubes at 25°C and stored in laboratory without light during 24 h. The essay was replicated three time. The rate of germination was determined based on a total of 100 conidia of pathogen selected randomly. The germ tube elongation was measured by micrometry method. The percentage inhibition was determined following to the formulae 1 and 2, adapted from (Greche et al., 2000):

Testing the effect of L. lecanii on early and late leaf spot

In order to determine the effect of L. lecanii on development of early and late leaf spot on peanut leaves, a susceptible variety of peanut “TS32-1” was used. For this experiment, the healthy leaves of TS32-1 30-day-old were collected from glasshouse-grown plants. Here, one peanut leaf was placed on blotting paper and preserved in Petri dish (size 90 mm diameter). Leaf and blotting paper were kept in moist during the experiment period to maintain the leaf in life. The experiment was replicated three time. In this experiment, we treated each lower face of peanut leaf with 100 μl of the solution of L. lecanii (106 conidia.mL-1), and then we added 100 μl of the suspension of the pathogen (105 conidia.mL-1). The samples were kept at 25°C in an oven refrigerant (Aqualytic), first in the dark for 12 h, and then alternately 12 h of light-12 h of darkness. The treatments of L. lecanii solution were realized each week for one month. From the appearance of the first spot, we have determined the scores of leaf spot severity every fifth days, following Subrahmanyam et al. (1982).

The means of conidial germination rates and germ tube length were calculated. The data was subjected to an analysis of variance and a comparison of average according to Duncan's test at 5% level. All data were computed using XLSTAT Pro 2007.

Effects of L. lecanii on conidia germination of C. arachidicola

Effects of L. lecanii on conidial germination of P. personata

Effects of L. lecanii on the development of early leaf spot on peanuts leaves

Inoculations with L. lecanii significantly reduced the severity of early leaf spot (Figure 1). We found that strains 4181 and 4184 delayed the manifestation of symptoms until twelve days after inoculation (DAI). The lowest severity scores were reported with L. lecanii 4184 during the experiment period. We observed evidence of the reduction of spot density and leaf area damage in Figure 2 (Photos A and B). Statistical analysis revealed significant differences between L. lecanii strains and distilled water treatments at 17 DAI (P = 0.001), 22 DAI (P <0.0001) and 27 DAI (P <0.0001). 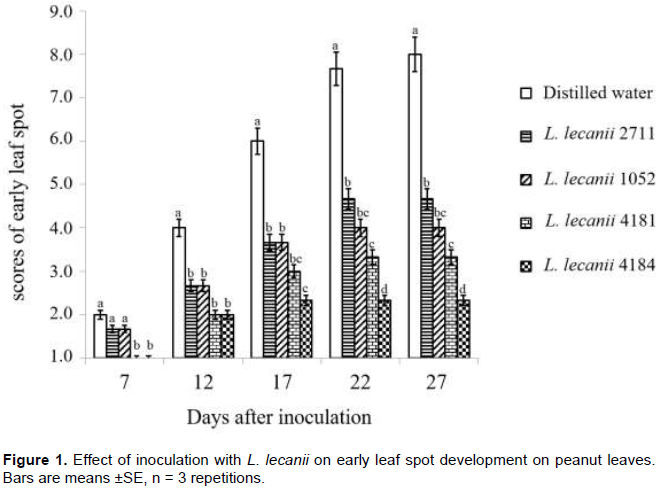 Effects of L. lecanii on the development of late leaf spot on peanuts leaves 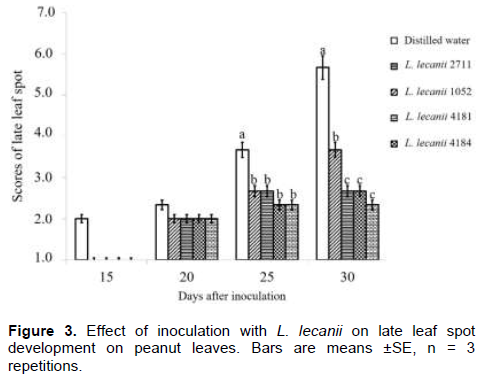 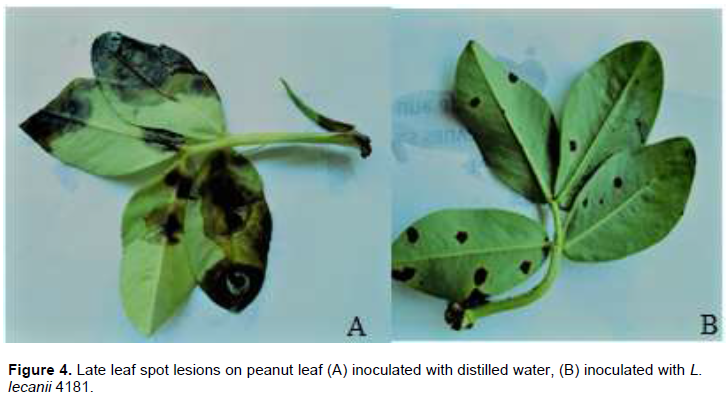 L. lecanii had an inhibitory action on conidial germination and germ tube elongation of C. arachidicola and P. personata. We also observed a weak development of leaf spots when the leaves are inoculated with the solutions of L. lecanii. The action of L. lecanii on disease development resulted in a delay in the onset of symptoms and a decrease in the leaf area damaged by pathogens. The best results were obtained with strains 4184 and 4181.

The potential use of Lecanicillium sp. in biological control against insect pests of crops has been demonstrated by many authors (Kim et al., 2007; Xie et al., 2019; Trinh et al., 2020), as an entomopathogen. Many  findings  carried  out  the  biological control of plant diseases by Lecanicillium sp. Indeed, it is known as mycoparasites of pathogens responsible of rust found in many species of plant. For example, some authors highlighted ability of L. lecanii to colonize lesions of coffee rust (Setiawati et al., 2021; Merle, 2019; Gómez-De La Cruz et al., 2017; Vandermeer et al., 2009; Jackson et al., 2012). Some hyperparsites have been studied in the control of peanut leaf spots. Dicyma pulvinata (Berk. & Curt.) V. Arx was found in leaf spot pathogens of peanut because of its effectiveness in controlling late leafspot both under field and greenhouse conditions (Mitchell et al., 1987). Subrahmanyam et al. (1990) has already showed the parasitism of V. lecanii (Lecanicillium sp.) on rust and late leaf spot of peanut in greenhouses. These studies showed that the pre-inoculation of peanut leaves with a suspension of V. lecanii conidia reduced the density of spots and damage leaf area due to rust and late leaf spot pathogens. However, the inhibitory effects of L. lecanii on the germination of conidia of C. arachidicola and P. personata were not yet well documented. This is also true for the inhibitory action of L. lecanii on the early leaf spot of peanut. According to (Mahfud et al., 2006; Kushalappa and Eskes, 1989), Lecanicillium sp. inhibits the germination of Hemileia vastatix ??spores. This could be explained by the fact that L. lecanii produces hydrolytic enzymes (e.g chitinases and proteases) in the culture media (Nguyen et al., 2015; Deshpande, 1999). The inhibitory action of chitinases in the germination of the spores of phytopathogenic fungi has been proven by many authors. Thus, Huang et al. (2005) have purified from the bacterium Bacillus cereus strain 28-9 an antifungal chitinase (ChiCW) which reduced the rate of germination and germ tube elongation of Botrytis elliptica conidia. Many findings revealed that, the L. lecanii can also endophytically colonize various plants (Gurulingappa et al., 2010). In fact, L. lecanii has already been isolated from asymptomatic cotton leaf strains (Gossypium hirsutum L.) (McGee, 2002). Gurulingappa et al. (2010) have demonstrated that L. lecanii colonized the leaves of cultivated plants such as cotton, wheat, tomato when they were inoculated with conidia. Our findings indicate the potentiality of L. lecanii use in the control of early and late leaf spot on peanut in semi-arid area.

In conclusion, this study demonstrated the effectiveness of L. lecanii in reducing damage caused by pathogens responsible for peanut leaf spot disease. The results also indicated the inhibitory action of L. lecanii on germination and germ tube elongation of C. arachidicola and P. personata conidia. Our results indicate the potential use of L. lecanii as a biological control agent against peanut leaf fungal diseases. In future, field studies are necessary to promote the use of L. lecanii to control early and late leaf spot in large scale.

The authors are grateful to Dr Kadidia KOITA and Dr Idrissa KABORE for many insightful comments and suggestions which largely helped to improve the manuscript, and English proof reading.