Climate change has become global issue for crops due to increase in temperature and less rainfall resulting in shortage of water and decrease in yield. The experiment consisted of five guar (Cyamopsis tetragonoloba L.) genotypes viz. S-5744, S-5824, S-5785, BR-90, BR-99 were cultivated under irrigated and drought stress (only soaking dose) conditions using Randomized Complete Block Design (RCBD) with 3 replications. The data for yield and its components were recorded at the time of maturity of guar genotypes. The two genotypes S-5744 and S-5824 showed better performance under both drought and irrigated conditions and gave maximum yield 900 and 1133.33 grams in drought and irrigated, respectively. All characters showed positive correlation with each other except number of cluster plant-1. The soil analysis was done in order to check availability and utilization of nutrients in the presence of water (irrigated conditions) and water deficit conditions (drought). The above mentioned two genotypes were less affected by the water shortage compared to others and were comeback after rainfall in the months of July and August and have ability of better uptake of nutrients from the soil in drought and irrigated conditions. However, nutrient use was higher under irrigated conditions.

On the global level, climate change has become an issue of severe and immediate concern having far-reaching effects not only on agricultural productivity but also on the demand for water and energy. During the past century, global temperatures  have  risen  by  nearly  1°C  (due  to burning of hydrocarbons and deforestation) and are expected to increase further by 1.4 to 5.8°C by the year 2100 (Naseer, 2013) .
In the past few years, the situation has worsened and signs  of  global  warming  are   becoming   evident.  With climate change, in addition to higher average tem-peratures, there is an increased risk of rising sea levels, melting of glaciers, flooding and higher frequency of droughts. Consequently, crop yields are expected to decrease, affecting livelihoods and food production (Naseer, 2013). According to Jamshed Iqbal Cheema (Chairman: Pakistan Agricultural Scientists Association), per capita water availability at the time of independence was 5,600 m3 against the current measure of 1,000 m3 and the shortage is expected to rise to 31% of people’s needs by 2025 (Naseer, 2013).
In this current situation of climate change and water shortage, guar crop plays an important role being highly drought resistant legume crop. Guar (Cyamopsis tetragonoloba L.) is a summer annual legume crop and commercially known as cluster bean (Kobeasy et al., 2011; Rao and Shahid, 2011). It is a highly drought tolerant and multi-used crop because it is used in gum industries, green manure, animal feed and fodder (Sharma and Gummagolmath, 2012). It is mainly cultivated in Pakistan and India as forage for cattle and vegetable for humans (Rao and Shahid, 2011) under arid/semiarid areas of the world preferring hot dry environment (Sharma and Gummagolmath, 2012; Sultan et al., 2012). Like other legume crops, guar is also an exceptional crop to enhance soil fertility as it can fix atmospheric nitrogen (Bewal et al., 2009; Sultan et al., 2012).
It has been observed that nitrogen fixation and nodulation are more sensitive to environmental stresses including water stress. Water stress has been reported to suppress O2 flux in nodules or supply of photosynthates, consequently causing a decrease in nitrogen fixation (Silvente et al., 2012). Lotter et al. (2014) observed that net photosynthetic rate decreases under water limited conditions that can affect nutrient allocation and biomass in a legume Aspalathus linearis. Legume crops play an important role in the economy of arid and semiarid areas of the world as they are the major source of protein (Sohrawardy and Hossain, 2014). Legumes help in improving soil fertility because of their inherent capability to fix atmospheric nitrogen (Sohrawardy and Hossain, 2014).
Genetic diversity is one of the important factors to improve many crops including guar (Sultan et al., 2012). It was observed that little water requirements of guar help in showing more potential to salinity, consequently to obtained fast-growing high quality forage (Rao and Shahid, 2011). Stafford and McMichael (1991) reported that yield of guar plants was more affected than seeds/pod, seed weight and racemes/plant under water limited conditions.
Comeback of plants against stress depend upon the genetic makeup of cultivar, severity and period of the stress and vegetative and reproductive stage of plant (Khan et al., 2011; Razzaq et al., 2013). Due to stomatal closure, photosynthetic  effectiveness  of  the  majority  of plants undergoes suppression under drought stress, which limits diffusion of CO2 in leaf (Ali and Ashraf, 2011).
The objective of this study was to identify impact of extreme drought conditions and availability and utilization of nutrients by plants from drought soil, including its effects on yield and other characters such as Number of Cluster plant-1, Number of Seeds pod-1 and Number of pods plant-1. Soil and crop management practices to alleviate negative effects of drought and heat stresses are also discussed. Investigations involving determination and identification of most stress-tolerant plant genotypes are essential for understanding the complexity of the responses and for future plant breeding.

Nutrient uptake
The soil analysis was completed for drought and irrigated set before sowing and after harvesting of guar crop, which revealed that plants utilized available nutrients (Organic Matter, Nitrogen, Phosphorous and Potassium) present in the soil.
The organic matter utilized by plants was 0.67 and 0.98% in S1B3 and S2B3 while 0.83 and 0.72% in S1B4 and S2B4, respectively. The available soil Nitrogen, Phosphorous and Potassium were utilized by plants in drought set (0.34, 0.50%), (0.1 and 0.7 ppm) and (44, 92 ppm), at depths of 6 and 12 inches, respectively. S1B4 and S2B4 revealed that plants utilized maximum available of soil organic matter (0.83, 0.72%), Nitrogen (0.43, 0.37%), Phosphorous (1, 2.2 ppm), and potassium (169, 178 ppm) (Table.1). From these values it is clear that genotypes in irrigated conditions used more soil nutrients as compared to genotypes in drought conditions.

The maximum uptake of nutrients to plants is only possible with availability of water in soil and genotypes in drought set remained in stress during the May and June due to high temperature (41.52°C) and (41.83°C) and low precipitation (0.51 mm). Guar is known for its drought tolerance and grows without irrigation even in areas with as little as 250 mm of annual rainfall (Undersander et al., 1991). The plants in drought set were recovered in the months of July and August because of low temperature and rainfall (11.93 and 69.85 mm) as compared to May and June and uptake of the available nutrients in soil (Table 2). Two genotypes i.e. S-5744 and S-5824 performed well in both drought and irrigated conditions which gave maximum yield (1133.3 and 1300 g) as compared to other genotypes with yield 900 and 666.67 g. 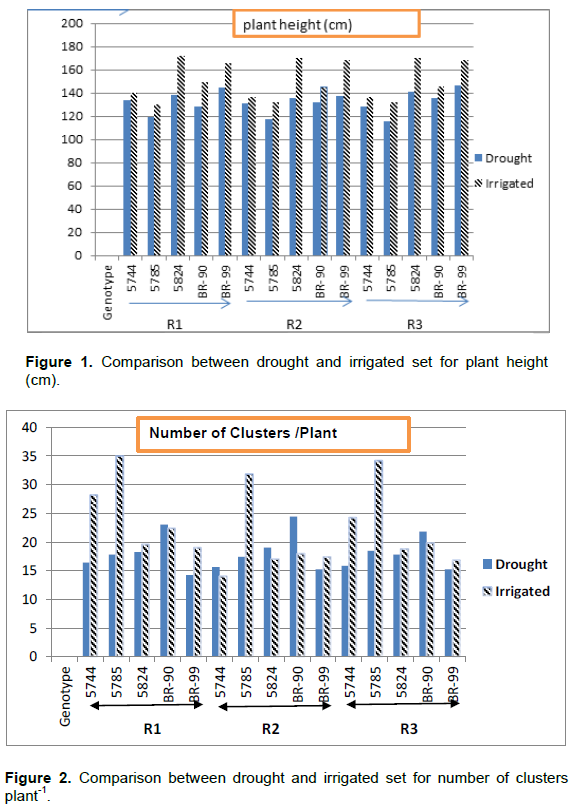 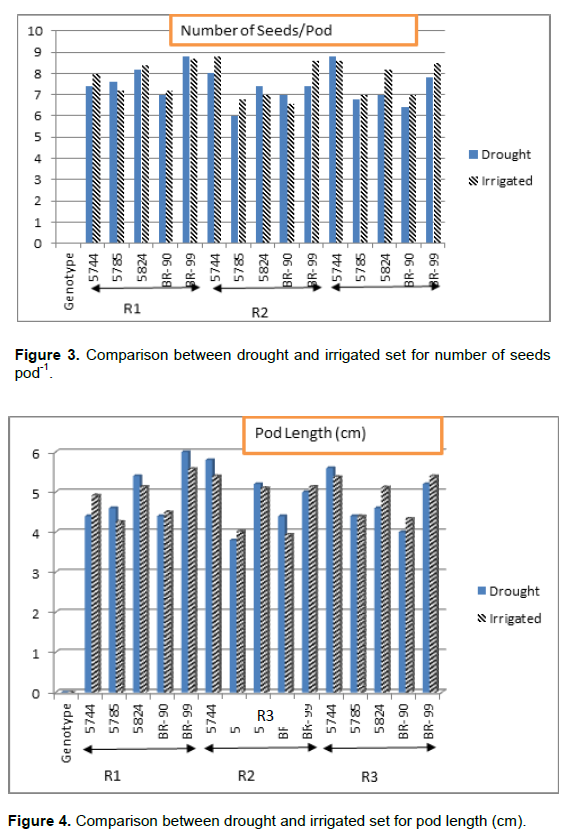 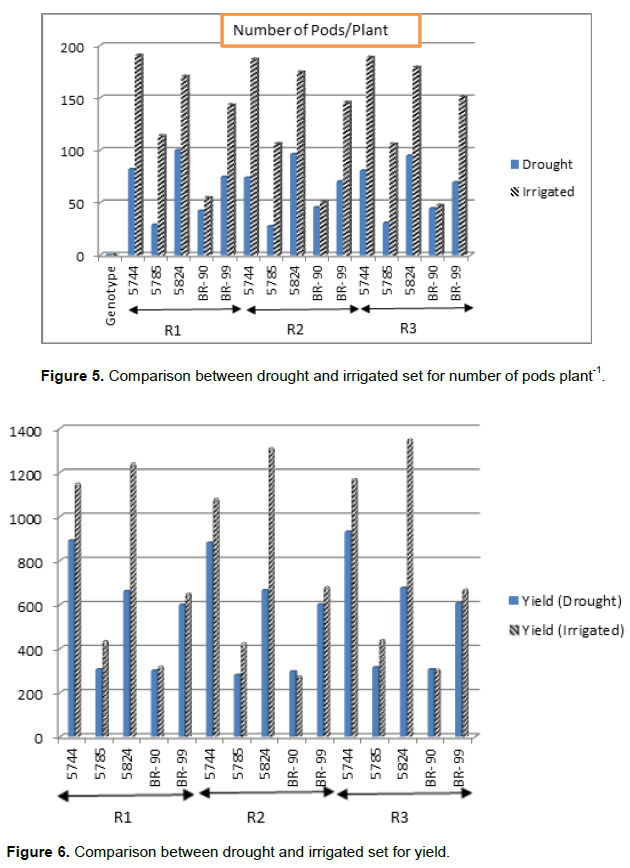 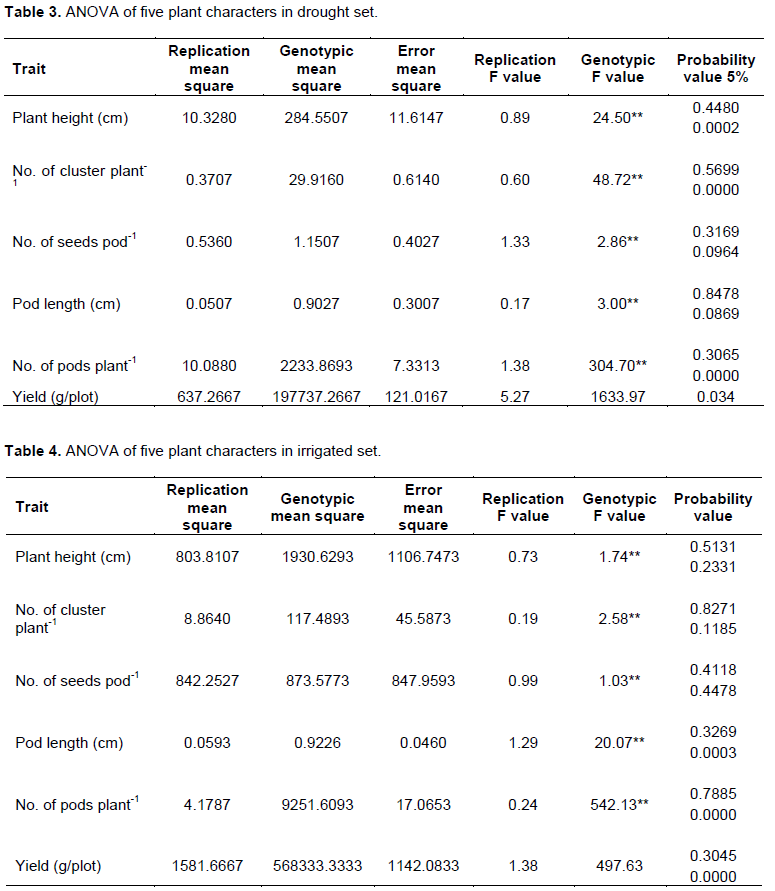 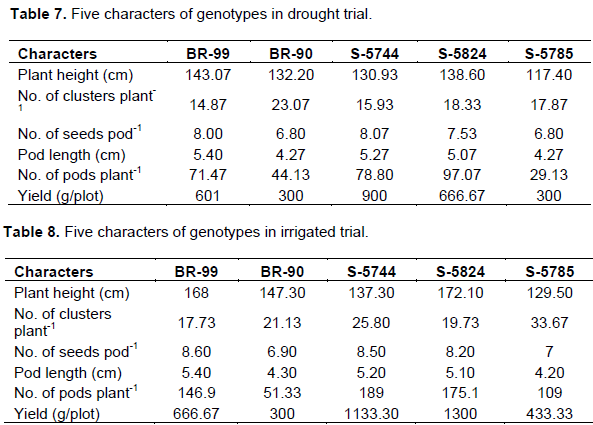 From this experiment, it is concluded that two genotypes S-5744 and S-5824 performed well under drought and irrigated conditions and produced more number of seeds pod-1, pods plant-1, pod length and finally the grain yield, which means that these two genotypes were selected on the basis of graphical data and had better nutrients and water use efficiency under shortage of water and higher temperature/climatic conditions. These genotypes (S-5744 and S-5824) will be helpful for increase guar production in the country, if release for general cultivation.