Views and perspectives of local farmers on crop diversification in the North-Western Free State, South Africa

The North-Western Free State is a main contributor of South Africa’s maize production which has recently been put under enormous pressure by climate change, pests, diseases, economic factors and population growth. Crop diversification, by means of crop rotation, has potential to alleviate some of the challenges faced by the farmers and communities of the North-Western Free State. Crop rotation can improve soil health and crop production but has shown to be site-specific. Understanding the views and perspectives of local farmers on crop diversification is an important starting point to determine successful crop rotation programs specific to the area. The objective of this study was to provide a baseline to develop successful crop rotations programs sustainable to the North-Western Free State environment and farmer. A uniquely designed questionnaire was distributed to sixty local farmers. Results showed that the farmers had a positive perception towards crop rotation, with 87% of them rotating their maize, most often with soya beans, sunflower and wheat. A simple linear regression further highlighted that those farmers who rated the relevance of crop diversity high, had a higher degree of diversification. This trend towards perfect diversification is seen as key to sustainable agriculture in the area.

Sustainable agriculture through crop rotation falls under one of the Food and Agricultural Organisation of the United Nations (FAO) principles of conservation agriculture which states that “Rotation or association should involve at least 3 different crop species” (FAO, 2022). Crop diversification, which is the addition of more crops to an existing  cropping  system,  can  be  achieved when selected crops are grown in succession each season (Feliciano, 2019; Beillouin et al., 2021). Crop rotation systems are normally made up of shallow and deep-rooted crops alternating with leguminous crops (Indoria et al., 2017). Studies suggest that by diversifying crops, farmers prevent nutrient losses and have the potential   to   maintain  high  production  levels  with  less fertilizer (Rovers and Kroonen, 1999; Nevens and Reheul, 2001; Smit et al., 2021). These benefits improve soil structure and moisture holding capacity which in turn improves root growth and root vigour, resulting in a healthy, high yielding plant (Nickel et al., 1995; Weisskopf et al., 1995).

Sustainable rotational systems differ according to climate and soil conditions; what works for one area does not necessarily work in another (Nortjè and Laker, 2021; Smit et al., 2021). Often farming systems proven successful in developed countries are attempted elsewhere with disappointing results, especially in developing countries (Nortjè and Laker, 2021). The challenge is to find sustainable crop rotation systems that involve suitable and profitable crops ideal for a certain environment (Strauss et al., 2021).

The North-Western Free State forms part of South Africa’s maize quadrangle and is known for its unique sandy soils and semi-arid climate (Kooij et al., 1990). For many decades, maize in the North-Western Free State had been grown in monoculture (Nortjè and Laker, 2021). This was due to a generally high and stable maize price, the use of mineral fertilizers and pesticides as well as the unique climate and soil conditions (Nevens and Reheul, 2001, Nortjè and Laker, 2021). Although mineral fertilizers replenish soil nutrients and pesticides control diseases and pests, prolonged use of these chemicals has shown to have undesirable effects on the environment (Prashar and Shah, 2016). In addition, the unique climate and soil conditions of the North-Western Free State limit the crop options available for rotation (Nortjè and Laker, 2021). Understanding the perceptions of local farmers on crop diversification and identifying the factors influencing farmers decisions on crop rotation will be fundamental in determining guidelines for successful crop diversification (with a focus on crop rotation) in the North-Western Free State (Kemausuor, 2011).

The objective of this study was to determine the views and perspectives of North-Western Free State farmers on crop rotation to provide a baseline to develop successful crop rotations programs sustainable to the environment and the farmer.

The study was conducted in North-Western Free State, South Africa (Figure 1). This area of about 7000 km2 forms part of the Nala municipality in the Lejweleputswa district of the Free State province. The North-Western Free State was chosen as the study area because of its strong focus on agriculture, specifically its large contribution to South Africa’s maize production (Agricultural and Rural Development, 2019). Due to its strong agricultural component, it has a small population size, contributing only about 5% to the country’s population (Statistics South Africa, 2016). General climate conditions in the area include hot summers, mild winters, and an annual rainfall of approximately 500 mm (Hensley et al.,  2006).  Recently  the  area  has  experienced  non-oscillating patterns of low rainfall seasons, followed by high rainfall seasons (Nortjè and Laker, 2021). The North-Western Free State soils are sandy with very little organic material, silt, and clay (Hensley et al., 2006). Water filtration through the soil is relatively high but a layer of clay at 1 to 2 m depth prevents water drainage, forming a beneficial water table (Beukes et al., 2019). 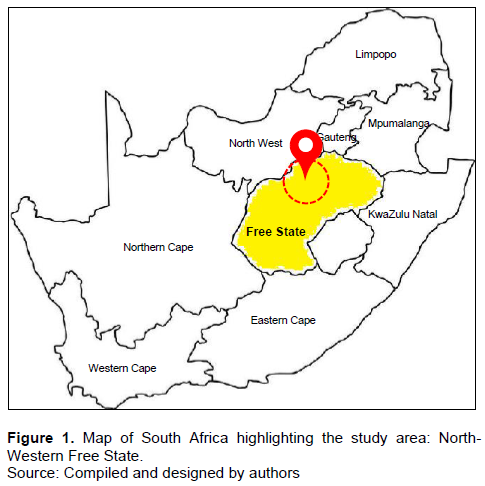 A mixed method research approach was taken whereby quantitative and qualitative data were collected through the admission of a questionnaire. The questionnaire was uniquely designed to determine the views and perspectives of North-Western Free state farmers on crop diversification based on crop rotation. Convenience sampling was conducted whereby farmers were approached personally at farmer gatherings and/or visitations during 2022. Inclusion criteria was based on occupation (farming) and farming area (North-Western Free State). Data were successfully collected from 60 North-Western Free State farmers. Completed questionnaires were captured and analysed using SPSS version 28. Farmer’s perception on crop diversity was measured using descriptive statistics. Furthermore, the crop diversity index (CDI) was measured using the Herfindahl Index (HI) as defined by Malik and Singh (2002). Tables and graphs were used to visualise results.

A one-way analysis of variance (ANOVA) was used to assess the relationship between demographic variables and the relevance of crop diversity as well as between demographic variables and CDI respectively. In addition, the association between the relevance of crop diversity and CDI was investigated using a simple regression. Statistical significance was accepted at p ≤ 0.05.

A total of sixty North-Western Free State farmers gave consent to partake in the study. The demographic characteristics of the study population are shown in Table 1. All participants were male farmers. Most farmers were in the age range of 51 to 60 years (30%), and many were married (85%). A third of the farmers had a tertiary education and more than half of them had been farming for more than 15 years. Furthermore, 85% of the participants belonged to a farmer’s study group. 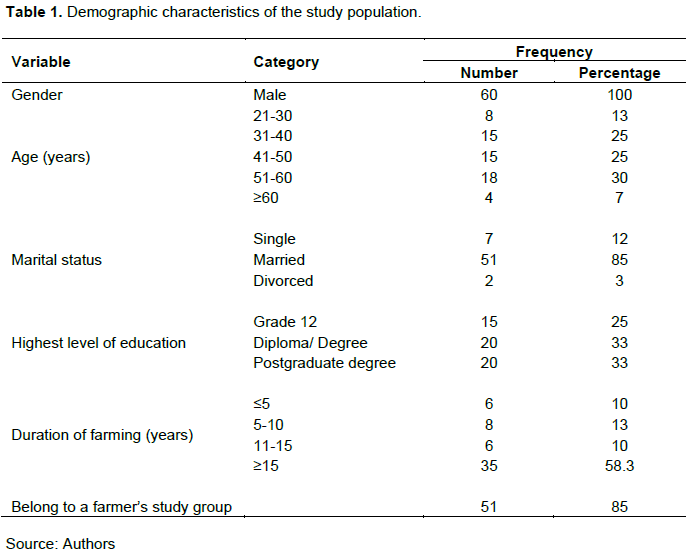 Farmers in the study area had a positive perception of crop diversity. The farmers rated all aspects of crop diversity relatively high on a scale of 0-5 with 0 indicating no relevance and 5 indicated very relevant (Figure 2). Yield increase had the highest relevance rating (4.26 ± 0.77) followed closely by improved soil health (4.25 ± 0.93). Better grain quality/ grading had the lowest relevance rating but still scored relevant (3.96 ± 1.01). 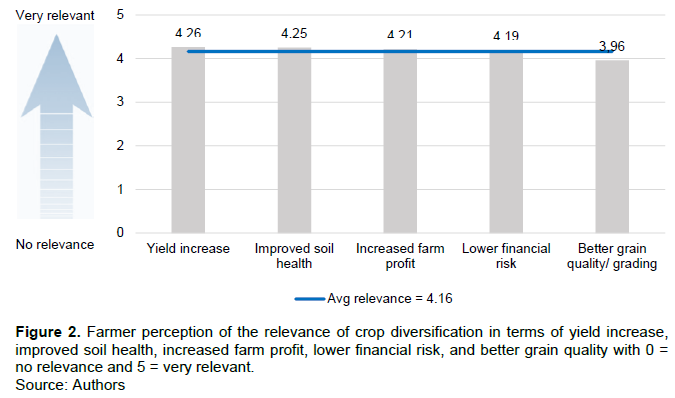 Almost all farmers in the study cultivated maize (93%) with 87% of the farmers rotating their crops. The majority of these farmers rotated maize with soya beans, sunflowers, and/ or wheat. Other crops included dry beans, peanuts, potatoes, cover crops, and grasses. Those who did not rotate crops mentioned that it came down to the practicality of it, mainly due to the lack of equipment but also an issue of time management.

Many farmers who rotated their crops did not consider following a fixed rotational system as very important but instead adjusted their rotational system according to the weather (especially rainfall) predications. Soil health and sustainability was also rated an important aspect when applying   rotational    systems.    In    addition,   technical information or guidance regarding crops and crop rotation from fellow farmers (mentor farmers) was considered most important by farmers rotating their crops. Farmer days as a source of crop rotation information was also rated very important. Technical information or guidance from magazines was less likely to influence farmers perception on crop rotation. 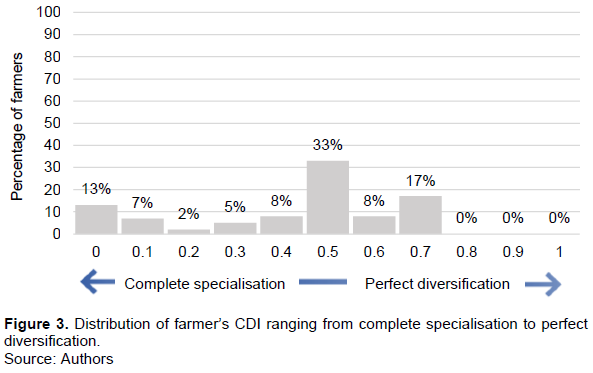 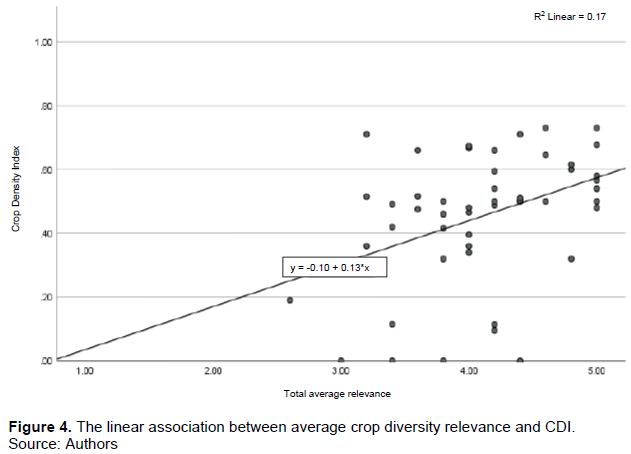 North-Western Free State agriculture is dominated by male farmers. This could be attributed to the more traditional conservative nature of the older population. More conservative communities tend to favour married living arrangements and the men are normally more hands on in the fields while the women are inclined to be responsible for family and house chores. Similar observations were made in a research study done by Mazibuko and Antwi (2019) in the North West province of South Africa.

North-Western Free State farmers are making a shift towards crop diversification. It has been noted that the area was previously dominated by monoculture maize (Nortjè and Laker, 2021). Similarly, in this study maize was the major crop cultivated in the area with some farmers still specialising in monoculture maize. However, most farmers recognised the relevance of crop diversification, especially with regards to yield increase, improved soil health and increased farm profit. It is likely that this positive perception of crop diversity contributed to the fact that so many farmers in the area did in fact rotate their crops.

Rotation systems in the North-Western Free State were similar to those mentioned in Strauss et al. (2021) which comprised mainly of rotating maize with soya beans, sunflower and/ or wheat. Soya beans, which provide nutrients naturally, reducing the fertilizer required for the proceeding crop, was the most popular choice to rotate with maize. This corresponds to the current surge in soya bean production where the area planted under soya beans in South Africa has increased by 64% since 2016/ 2017 with the North-Western Free State being a major contributor (Department of Agriculture, Land Reform and Rural Development (DALRRD), 2020; Farmer’s Weekly, 2021). Few farmers in the area rotated maize with cover crop, which is a cash crop substitute that should be considered to improve rotational system’s productivity (Smit et al., 2021). By introducing cover crops, with the already included soya beans in rotation with maize, soil nutrients  could  be  further  replenished,  decreasing  the amount of costly fertilizer required (Nortjè and Laker, 2021). This, together with the lower input costs associated with cover crop (utilised by animals) and soya beans production (Farmer’s Weekly, 2021), could steer farmers into crop (and enterprise) diversification resulting in more farmers experiencing the decrease in financial risks perceived to be linked with crop rotation.

North-Western Free State farmer’s perception on crop diversity, and practise thereof, was not influenced by demographic characteristics. This could be attributed to the fact that many farmers often followed their own head when it came to making crop diversification decisions. However, similar to findings from a study tour by United States Agency for International Development (USAID), (2007) and research conducted by Sinyolo and Mudhara (2018), the importance of farmer organisations as a means of spreading knowledge and influencing decision making was evident in this study. Although studies have shown limited access to extension advisory in the area (Myeni et al., 2019), most North-Western Free State farmers belonged to some form of farmer group or association and also rated fellow farmers (mentor farmers) as the most important means of gaining technical information or guidance regarding crops and crop rotation. The transfer and spread of information and knowledge regarding crop diversification are essential, as was confirmed by the positive association between farmers who were more aware of, and rated, the relevance of crop diversification high and a higher CDI.

North-Western Free State farmers appear to be more conservative in their way of living but are open to altering their agricultural practices. They have acknowledged the benefits of crop diversity and are moving away from crop specialisation, towards crop diversification. Furthermore, they have highlighted the importance of farmer organisations or associations as a platform for sharing knowledge, discussing, and solving problems. In conclusion, North-Western Free State farmers are affirming to the crop diversification principle of conservation agriculture, ultimately ensuring sustainable agriculture in the area.

1. Crop rotation benefits should be promoted at farmer meetings/ days

2. The incorporation of cover crop in crop rotation programs should be considered

The authors would like to thank the Department of Higher Education and Training (DHET), South Africa for their financial contribution towards the study.