Onion (Allium cepa L.) belongs to the family Alliaceae and the genus Allium (Hanelt, 1990). It is one of the mostly vital vegetable crops commercially grown in the world   (Grubben     and    Denton,    2004).    Onion   has economically important role in Ethiopia. The country has massive potential to produce the crop throughout the year both for domestic use and export market. Its production  also  contributes to  commercialization  of  the rural economy and creates many job opportunity (Nikus and Mulugeta, 2010; Guesh, 2015).

Agriculture is the main driving force of Ethiopia’s economy and long-term food security. It contributes 43% to the gross domestic product (GDP); employs nearly 85% of the total labor force and contributes about 90% of the national export earnings. The agricultural sector is dominated by small-scale farmers, accounting for 95% of the total area under crop cultivation and more than 93% of the total agricultural output (CSA, 2010).

Crops are the major agricultural commodities on which Ethiopians depend for their daily food. Onion is a major vegetable crop in Ethiopia. It is well adapted to highland and low land soils of the country. Its production in Ethiopia is 9.3 ton/ha and in Tigray region is also 6.3 ton ha-1 which is low when compared with the national average. This might be due to low fertility of the soil (CSA, 2018/2019).

Fertilizer usage is one of the instruments implemented as a means of raising production and income of farm and households. However, the extent to which fertilizers are used still differs considerably between various regions of the world. In Ethiopia, diammonium phosphate (DAP) and urea were the commonly used chemical fertilizers for crop production with having a common consideration of nitrogen and phosphorus were the major limiting nutrients for Ethiopian soils. Past researchers carryout many activities under agro-ecologies towards improvement of agricultural productivity using urea and DAP in Ethiopia. Plant growth and crop production require an adequate supply and balanced amounts of all nutrients, but the old practice that only uses urea and DAP lacks the use of micronutrients. Since deficiency of micronutrients is reported in tropical soils, necessitate the application of nutrient sources that reduce such deficiencies. This can only be achieved if the nutrient content of the fertilizer fits to the needs of the crops.

(2) To validate soil fertility map based blended fertilizer in the study site.

The field experiment was conducted for two consecutive years during 2017 and 2018 under irrigated conditions at Tselemti district in Medihnalem kebele, North Western zone of Tigray regional state (Figure 1). The geographical location of the study area is: 13°37'4'' N and 38° 12' 40' E of latitudes and longitudes, respectively. The study area is located at an altitudinal range of 1310 m as l, in a semi-arid climatic zone and has mixed crop-livestock farming system (OoARD, 2020). 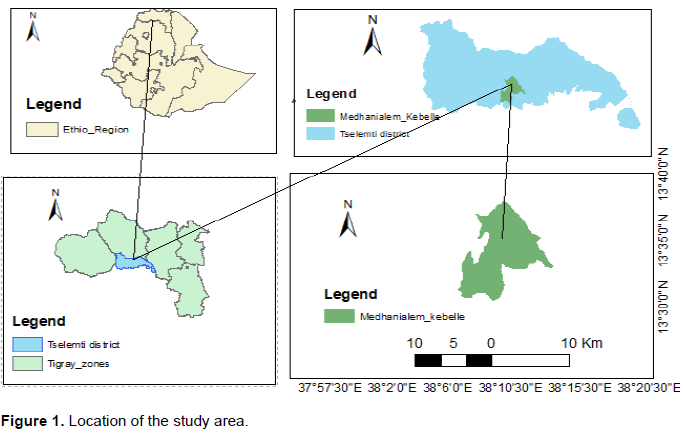 Topographically, the area has 70% sloppy areas and30% flat areas indicating which is characterized by rugged, plains, river valleys and plateau topography in its southern and western parts (OoARD, 2020).

According to the agro-climatic classifications of Ethiopia, Tselemti district fall in dry to moist Kolla, dry to wet Weyna Dega and moist to wet Dega (Hurni, 1998). The particular site is characterized as dry-moist Kolla (Darcha et al., 2015; Redda and Abay, 2015).

Before planting surface composite soil sample was collected from experimental site for site characterization and the soil sample was taken at a depth of 0 to 20 cm, auger was used for collecting the disturbed sample. The collected sample was properly labeled, packed and transported to the Shire Soil Research Center and prepared for analysis according to the standard procedures.

Determination of cation exchange capacity CEC at pH 7 was carried out with Ammonium Acetate method as described by Chapman (1965). The amount of exchangeable cations potassium (K) and sodium (Na) was determined by flame photometer as described by Gupta (2000); while exchangeable  calcium  (Ca)  and magnesium (Mg) were determined by titration method (Tucker and Kurtz, 1961). The parameters analyzed in the laboratory are listed in Table 1.

The collected data were subjected to statistical analysis of variance (ANOVA) using SAS version of 9.0 (SAS, 2002). Significant difference between and among treatment means were assessed using the least significant difference (LSD) at 0.05 level of probability (Gomez and Gomez, 1984).

Result showed that days to 90% maturity were not statistically significantly affected (P ≥0.05) by the rates of blended fertilizer, but they have numerical difference among the treatments (Table 2). This result happen to be due to the fact that fertilizers does not have an impact on physiological maturity on single variety unless with variety difference (Tekulu et al., 2019). 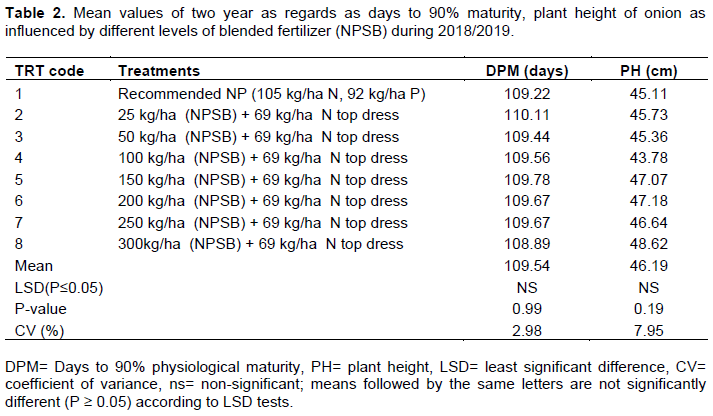 Evaluation of NPSB on onion yield and yield component parameter

Result showed that plant height was not statistically significantly affected (P ≥ 0.05) by the blended fertilizer rates, but there have been numerically difference among the treatments (Table 2).

This result is contradictory with the findings of Morsy et al. (2012) and Nasreen et al. (2007) who reported that onion plant height significantly increased as nitrogen fertilizer rates increased.

As the analysis of variance revealed that marketable yield was not statistically significantly affected (P ≥ 0.05) by the blended fertilizer rates, but they have numerical difference among the treatments (Table 3).

This result is contradictory with the findings of Muluneh (2016) who reported that onion yield significantly increased as blended fertilizer rates increased.

Unmarketable yield was not statistically significantly affected (P ≥ 0.05) by the blended fertilizer rates, but they have numerical difference among the treatments (Table 3).

The ANOVA result revealed that total yield was not statistically significantly affected (P ≥ 0.05) by the blended fertilizer rates, but they have numerical difference among the treatments (Table 3).

Application of different rates of blended fertilizer does not significantly affect most of the crop parameters tested, such as crop phonology, growth parameters, yield and yield components at both sites in the two consecutive years.