Climate change and variability poses the greatest challenges to agricultural production in the developing countries and especially drylands. Across Africa, yields of staple crops such as maize, wheat, sorghum and a variety of fruit crops have significantly decreased in the recent years, thus, widening food insecurity gaps. In the dryland areas of Kenya, the situation is further aggravated by low adaptive capacities and highly fragile productive systems. The, understanding of the links between climate change and agricultural production is critical to scientists, policy makers and farmers in an attempt to mainstream agricultural adaptation and mitigation measures. Climate change information provides the opportunity for efficient resource utilization, increase in agricultural production and enhancement of farmer resilience. The Lower Tana Basin in Kenya is one of the highly vulnerable regions with increasing shocks of climate change and variability that threatens the lifeblood of community livelihoods and biodiversity integrity, human survivals. This research focused on rainfall characteristics of the Lower Tana Basin in relation to maize production and food security of the region. Observed rainfall and temperature records from weather stations located in the Lower Tana Basin were collected and analyzed. The findings of this study showed evidence of increased return period of extreme drought events from a frequency of 4-5 years to 2 or less years in the last two decades. Impacts of the changing climate on maize production is evidently significant and farmers need to emphasize agricultural diversification with the adoption of other alternative crops such as mangoes and cassava that yield well, are climate resilient and likely to minimize future food security risks.

Climate change impacts are among the most important environmental and scientific challenges facing humanity in the 21st century (Rahman and Mallick, 2005; IPCC, 2014). In the drylands of developing countries, drylands and the poor in society are considered highly vulnerable due to their low capacities to effectively cope with the potential impacts associated with decreased agricultural yields (Shah et al., 2008; Nellemann et al., 2009). Information regarding the potential impacts of climate change and their adaptation strategies ought to be integrated while developing future policies (IPCC, 2007). Such information and their associated uncertainties should be communicated to end-users and policy-makers, so that adequate policy decisions to respond to climate change can be taken in a fully informed way. In the developing countries, drylands constitutes over 40% of the earth’s land surface and home to approximately 2.5 billion people (FAO, 2011). These drylands “struggle” to provide sufficient food to the rapidly growing population amidst other daunting physical and demographic challenges such as high poverty levels and unemployment, rapid urbanization, severe water scarcity, and land degradation (Reynolds et al., 2007; World Bank, 2014). Climate change is exacerbating the dryland problems and constraints leading to increased out-migration, insecurity, damaged social fabrics, low levels of productivity and limited economic growth (Keane, 2009). Therefore, there is need to urgently respond to the emerging dryland challenges that may determine the fate of these insecure regions in the years to come.
This study describes the contribution of climate information in addressing climate change adaptation strategies in the agricultural production systems to achieve food security. The observed changes in rainfall and temperature conditions (Christensen et al., 2007) are causing major impacts on food security for the rural households especially in drylands which largely rely on rainfed agriculture as a source of livelihood. In Kenya, it is estimated that over 10 million people suffer from chronic food insecurity and poor nutrition with about 1 to 2 million people dependent on emergency food aid (GoK, 2010). Although there has been an increase in knowledge accumulated on climate change among stakeholders, the extent of the impact still remains uncertain for the ASALs where climate projections are nebulous. Generally, the impacts of climate change on agriculture and food security in regions are evident through changes in crop yields, water availability, pests and diseases, animal health and other biophysical factors (Hatfield et al., 2011). The broad objective of this study was to mainstream climate change information into crop production systems decision making processes for enhanced food security. Specifically, rainfall and temperature in Kenya’s Lower Tana Basin were analyzed to decipher salient patterns and evidence of climate change, described major crop yield characteristics and their correlation with seasonal rainfall and finally generated useful climatic information for supporting decision making to enhance crop production systems to minimize food security risks.

The study was conducted in Kenya’s Lower Tana Basin with specific focus on Tana River County (Figure 1). The County is located 150 km north of Malindi, covers a total surface area of 38,437 km2 and accounts for 6.61% of Kenya’s total surface area (Mireri et al., 2008). 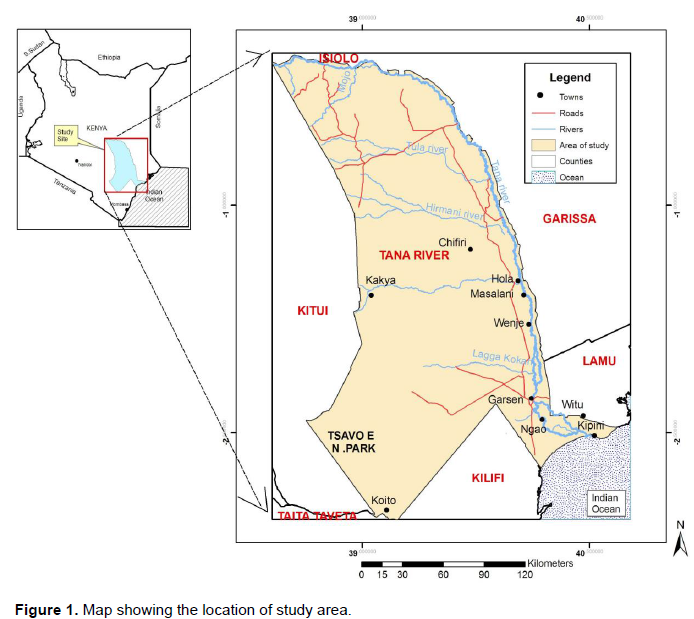 Climate and agricultural production data for Tana River County were collected and analyzed. Climate datasets were limited to only rainfall and temperature due to their direct and significant influence on agricultural productivity and other livelihood sources in the region. Climate data were collected from weather stations located in the County namely Witu, Tana, Kipini, Garsen, Bura and Garissa. Climate data quality control tests were done using single mass curves to verify their consistency and continuity. The missing climate data records were estimated using cross correlation approach with nearby stations with highest correlation coefficient to the station with the missing data in the same period.
Study agricultural datasets comprised of crop types and their corresponding yields (tons/acre), types and population of livestock. Agricultural data were sourced from Tana River County sub-counties’ agricultural and livestock extension offices namely Tana North, Tana River and Tana Delta sub-counties. The major crops focused during the study were those grown under rain-fed conditions which comprised of maize, green grams, cassava, mangoes and rice. Data were analyzed using various statistical tools namely Xcel, Instat+ and GenStat. Seasonal rainfalls were correlated with respective crop yields to establish relationships which in turn used for projecting future scenarios. Other statistical tools such as box plots scatter plots, standardized anomalies and time series graphs were used to illustrate data patterns and the underlying structures in climate and crop yield datasets. Time series graphs were also used to demonstrate variability and trends of historical rainfall, temperature and crop yield datasets. Pearson’s correlation measure was used to determine the strength and direction of the two study variables. Similarly, rainfall anomaly graphs were used to illustrate trends of extreme events in the region namely drought and floods. Long-term term data records from each weather station were collected and varied according to time of establishment. 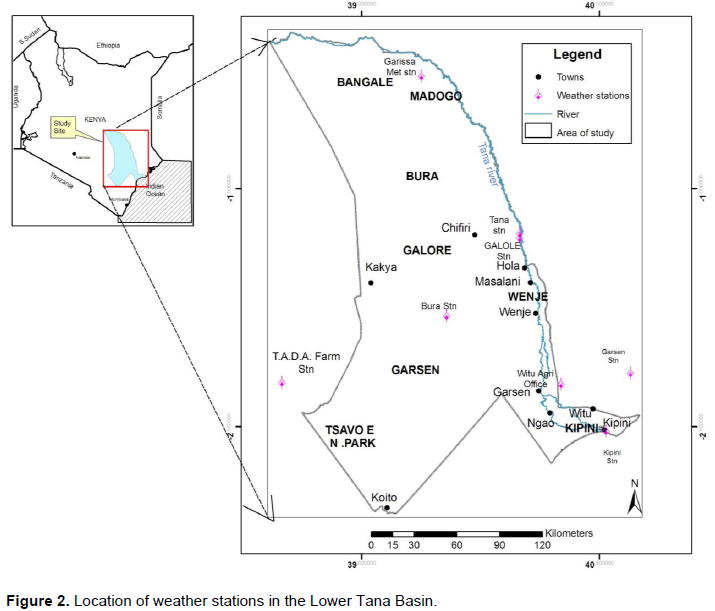 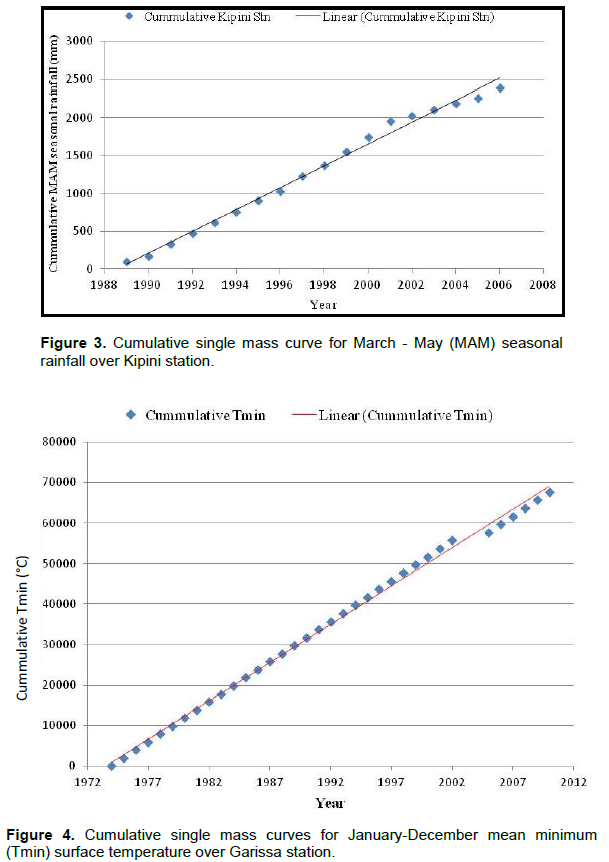 The results show straight lines fitting on the data patterns, a clear evidence of data continuity and consistency, hence, good quality records for the study. Less than 10% of missing data records was estimated using cross correlation approach with nearby stations. Therefore, seasonal rainfall homogeneity tests affirm  that weather stations records in the Lower Tana Basin were correctly recorded and could be used to make inferences regarding projected climate change trends and corresponding implications on crop yield variations. The results of quality control test formed the foundation for further analyses undertaken to investigate various specific objectives of the study.
Rainfall characteristics in the Lower Tana Basin
Analysis of rainfall across the Lower Tana Basin showed that the mean annual rainfall in the region varied from a low of 300 mm in Garissa to highest slightly above 1100 mm in Witu (Figure 5). 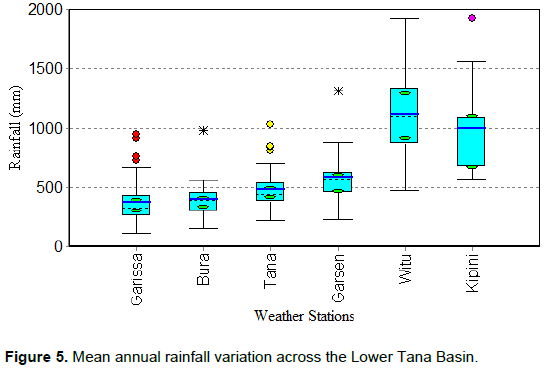 The rainfall characteristics results demonstrated that Witu and Kipini are good agricultural potential zones in the region under rainfed production. These areas are also close to Indian Ocean and periodically receive convectional rain that further boosts this agricultural potential.  Correspondingly,  hinter-land  areas   such   as Garissa, Bura and Tana receive depressed rainfall of below 400 mm and explain why crop production activities under rainfed conditions in these areas are unsuitable and highly vulnerable. Further assessment of maize production potential during two main seasons; March-April- May  (MAM)  and  October-November- December (OND) seasons, revealed that only the MAM season in Witu and Kipini met the required threshold for successful maize production under rainfed conditions (Figure 6). This is because according to Food and Agriculture Organization (FAO) study of 1986, maize production within a season needs a mean rainfall of between  500  to 800 mm. 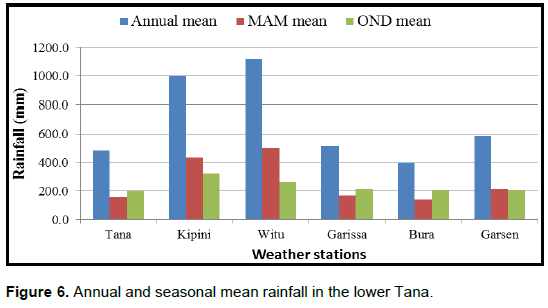 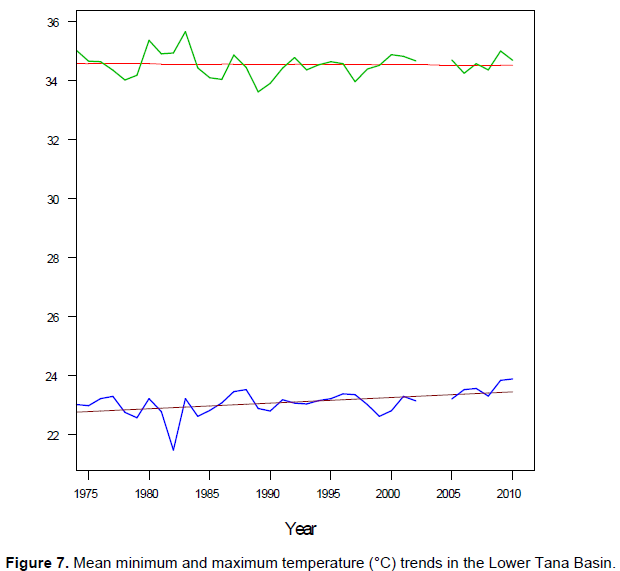 Crop yield characteristics in the Lower Tana Basin
Crop yield analyses in the region produced under rain-fed conditions showed maize with low yield potential (less than 1 tons/acre) as compared to cassava  and  mangoes that yields highest (above 7 tons/acre) despite the changing climate (Figure 8). 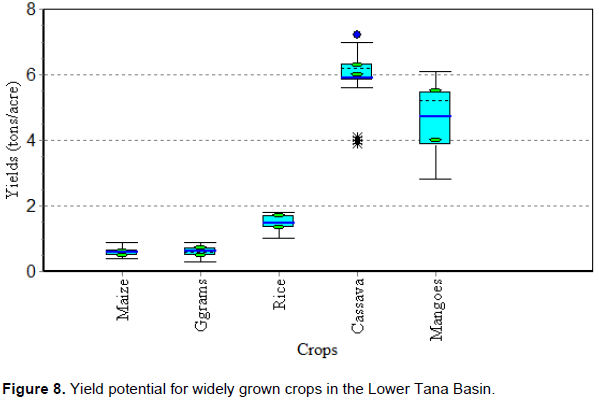 A correlation analysis done between MAM seasonal rainfall and various crop yields in the region generally showed low correlation values. In Kipini, maize yields showed relatively strong negative correlation of 0.45 with MAM seasonal rainfall implying the strong contribution of other factors of production which must be considered during production planning. A rainfall regression model on maize values showed that only 8% of variance in maize yields was explained. This means that other factors other than rainfall explain 92% of the maize yield variation curve. A consideration of these other agrotechnical factors which may include soil fertility, seed genotypes, planting dates, pest and disease incidence among others) is critical during agricultural planning to achieve future food security.
Decadal seasonal rainfall changes in the Lower Tana Basin
Assessment of decadal seasonal rainfall changes across the region during MAM and OND seasons shows an increased positive change of rainfall (enhanced rainfall) during the MAM season of between -10 to 30 mm/decade and a negative change  during the OND season of -30 to -11 mm/decade (Figures 9). This slight rainfall increase in the region will not have significant gains in crop production due to the resultant significant increase in temperature that will increase transpiration and evaporation rates, hence negative gains. 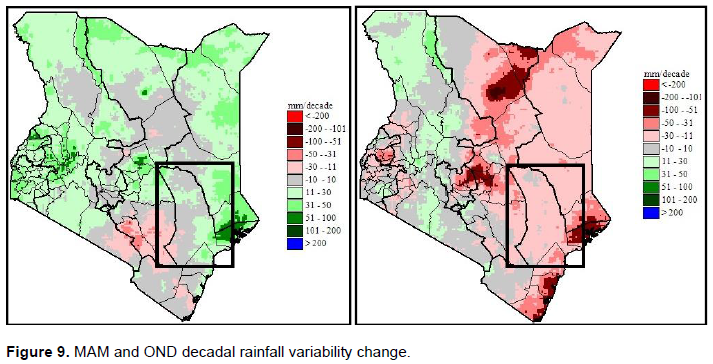 The decadal rainfall change findings constitutes a key strategic planning information that agricultural managers and policy makers in Tana River County can apply in addressing long-term agricultural and food security measures in the region. The result indicates that MAM seasonal rainfall is expected to increase along the  region  and concurs with the projected IPCC findings on eastern Africa.
Extreme events in the Lower Tana Basin
Assessment of rainfall anomalies in the region reveals a regular occurrence of extreme depressed and enhanced rainfall periods (Figure 10). The return period of above average rainfall event (Floods) is 8-10 years while the below average rainfall event (prolonged drought incidence) is about 4 years. For instance, some of the extreme flood events in the region occurred in 1997/98 while the prolonged droughts which led to severe famines was observed in 1983/84, 1995/96, 1999/2001 and 2004/2005 respectively (Figure 10). 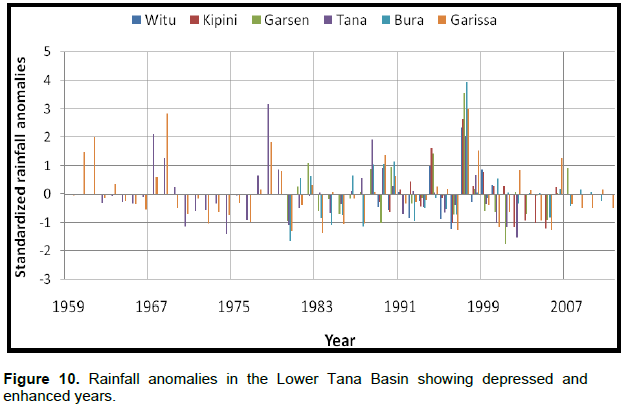 The frequency of drought and intensity in the region increased from the year 2000 compared to flood events (Figure 10). This constitutes evidence that informs planning and decision makers in the  region  engaged  on agricultural production activities to invest in key adaptation measures such as more investment in water harvesting and storages structures in order to minimize potential impacts.

Rainfed crop production in the Lower Tana Basin is under threat from climate change and variability. The maize production zones in the region that are critical for food security achievement are currently producing within the minimum threshold requirements and the changing climate may render these zones unproductive. Consequently, agricultural managers in the region should strongly consider other factors of crop production in their planning beside rainfall (such as the type of soil, soil fertility, and a range of farm management practices by farmers (control of weeds, pests control and timely planting/harvesting) as this study found that 92% of the variance in maize is attributed to these other factors. Against this background, it is prudent for policy makers and planners to mainstream climate information and appropriate adaptation measures in developing agricultural plans if food security is to be achieved in the region. Further, the government should consider strengthening food production initiatives as well as, value addition and marketing strategies for mangoes and cassava crops, which have demonstrated strong resilience to climate change.