The culture of watermelon is mostly responds to technological advancement. The fruit is analyzed in terms of its production and quality. Among the factors involved in its production, irrigation is very important; however it must be well managed. There are phases of the culture that requires greater or lesser amount of water for maximum productivity and high quality. In this context, the present research was conducted to evaluate the cultivation of watermelon under water deficit in the experimental area of semiarid Brazilian. The experiment was conducted at the National Department of Works Against Drought, Ayres of Souza, Ceará, Brazil. Growth variables were evaluated, such as the number of leaves, leaf area, length, and number of branches. The evaluations were conducted at 36, 42 and 49 days after transplanting (DAT). The data obtained showed that culture has water deficit tolerance, and if properly handled, using the right amount of irrigation water, there would be no damage to the culture.

Population growth has consistently impelled the use of irrigation technologies for production of foods, not only to complement water needs of crops in the humid regions but also to make agricultural semiarid areas productive (Lima et al., 2012).

According to Lima et al. (2010), in a bid to increase productivity, create new needs and prospect of development, some sectors seek more efficient means of production; these  include  in  this  context:  expansion  of irrigated areas and environmental sustainability (e.g. efficient management of water use, minimizing the impact on demand for water resources, leaching of nutrients and the risk of secondary salinization).

Water resource is increasingly becoming scarce, and for greater use of irrigation, the use of practices that can efficiently contribute to reducing waste of water, using appropriate water levels and time of application suitable for the crop is recommended (Valnir Júnior, 2007).

The application of a significant quantity of water in irrigation influences the development of the crop; water deficit can lead to low productivity. Some benefits of irrigation include: irrigation efficiency, reduction of costs, and environmental risks (Frizzone, 2010).

Due to water deficit, it is necessary to supply the water demand of the crop during evapotranspiration. This type of management can be practiced, with full and supplemental irrigation. Water can be applied during the crop cycle or during stages not critical to the water deficit. In the latter case, smaller reductions in crop productivity are possible, according to Frizzone (2010).

In the state of Ceará, the high temporary and space variability of precipitations make irrigation the only way to guarantee agricultural production. Irrigated Perimeter Ayres of Souza around river Jaibaras's alluvial plain, located in the municipal district of Sobral, stands out among the areas irrigated in the state. The irrigation of the perimeter is fed through the dam on Jaibaras River with a maximum accumulation of 104 × 106 m3, at Federal Public Ayres of Souza (Carneiro Neto, 2005). Although in the perimeter, there is overhead irrigation on the surface, there are implanted overhead irrigations through leakage in small agricultural areas, where water is usually scarce. This is done with the purpose of optimizing the available water in the rural community (Moreira et al., 2015).

Watermelon (Citrillus lanatus) is one of the Cucurbitácea's family species and is produced more in Brazil. Northeast stands out as the largest producing area, because it has a favorable climate. In other areas where the climate is cold, watermelon does not develop satisfactorily. Small producers make more use of this culture, because it is easy to handle and has smaller production cost; however, the producer needs to adopt an appropriate handling, minimize production costs and optimize the use of irrigation water, according to Moreira et al. (2015).

The main watermelon producing regions in the country are the Northeast with 34.15 of the national total (Silva et al., 2015). According to Amaral et al. (2016), the productivity and final quality of the watermelon crop are related to several factors, which act during  all  phases  of its growth and development.

In this context, the present research was conducted aiming to evaluate the cultivation of watermelon under water deficit in the experimental area of semiarid Brazilian.

The experiment was conducted in an area of 2000 m2 in the irrigated perimeter of National Department of Works Against Drought (NDWAD), Ayres of Souza, in the district of Jaíbaras, municipality of Sobral-Ceara, Brazil; it has geographical coordinates of 3°45â€Ÿ5" South and 40°27â€Ÿ West. Its temperatures vary based on the time of year and location. It has a minimum of 21°C and maximum of 36°C. During the trial period, the average rainfall is 12.06 mm.

The experimental design was randomized blocks, with seven treatments and four replications; totaling 28 parcels in an area of 2000 m2. Each parcel had 12.5 × 2.5 m, containing five rows of watermelon with a plant per plot, and the plants are located on the sides considered as surrounding.

The treatments were defined based on the time of application of water at different phenological stages of the culture: vegetative stadium, Estadio deflowering, and development of the fruit, as noted in Table 1. 50% level of water was used in treatment 1 (without limited water). The crop evapotranspiration (ETc) = crop coefficient (CC) × reference evapotranspiration (ET0); it was estimated using the method of Pennam Monteith, which was recommended by Allen et al. (1998).

The seeds of the variety of watermelon Top seed Premium Explorer 1 (one), used in the experiment, were acquired in AGRIMASTER, Marco-CE, Brazil. Watermelon seeds were sown in styrofoam trays with 128 cells. Eight trays were used in total, they were filled with sand and livestock manure in a simple sieve. The transplanting and irrigation were done 13 days after sowing (DAS).

The variables analyzed were number of leaves, leaf area, number of secondary branches and length of the main branch. All variables were valued at 36, 42 and 49 days after transplanting (DAT). The number of leaves and number of branches were obtained through the count. For the determination of leaf area per plant-LA (cm2), measurements of length and width of each sheet were carried out, using a ruler graduated in centimeters and then calculated using the formula: LA = length × breadth × 0.70 watermelon. The length of the branch was taken.

The data obtained in the experiment  for  dealing  with  qualitative variables were subjected to analysis of variance (Tukey test) and there was significant deployment of the degree of freedom, by means of polynomial regression analysis, using statistical software SISVAR, according to Ferreira (2014).

Figure 1 shows that the variable, number of leaves per plant  (unit)  was  analyzed  in  36,  42  and  49 days after transplanting (DAT). No statistically significant difference was observed between treatments in any of the seasons. In Figure 1, although there is no significant difference in treatment T4, there was decrease in the number of leaves in 36 DAT, possibly due to water deficit. According to Doorenbos and Kassam (1994), limited provision of water causes a decrease in the production and development of the culture. 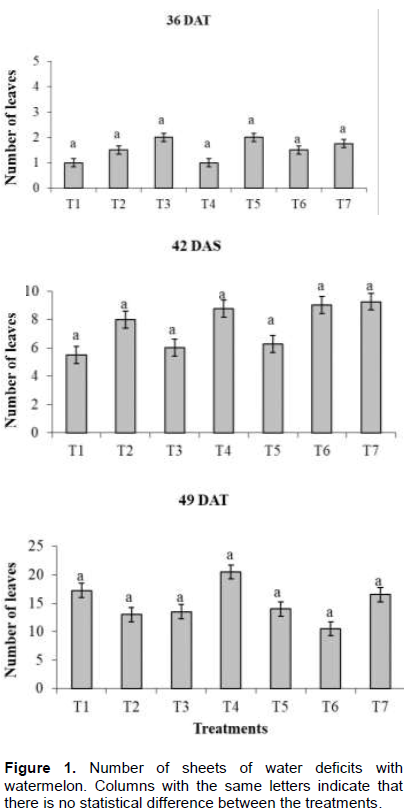 At 42 DAT, better treatments included T4, T6, and T7; they provided the area to accomplish photosynthesis. At 49 DAT only T4 was superior to other treatment measures.

There is reduction in the number of  leaves  due  to  the small amount of available water. Water stress causes decrease of production in foliar area, the closing of the stomata, the acceleration of senescence and abscission of the leaves; it does not just limit the size of the individual leaves, but also the number of leaves. It decreases the number and rate of growth of the branches (Taiz and Zeiger, 2009).

Similar results were observed by Sousa et al. (2012) who evaluated watermelon plant cultivation under water deficit in the semiarid region of Brazil. Such results can be related to the maintenance of the balance between absorption and respiration. This can increase efficiency in the use of water.  Salamoni (2008) enumerates the effects of water deficit on plants, leaf senescence, and reduction in the number of leaves.

There was a significant statistical effect in 36 DAT (5%). In Figure 2, the largest value of the foliar area (0.2103 cm2) was found in T7 and there was reduction in other middle of that variable at 36 DAT. 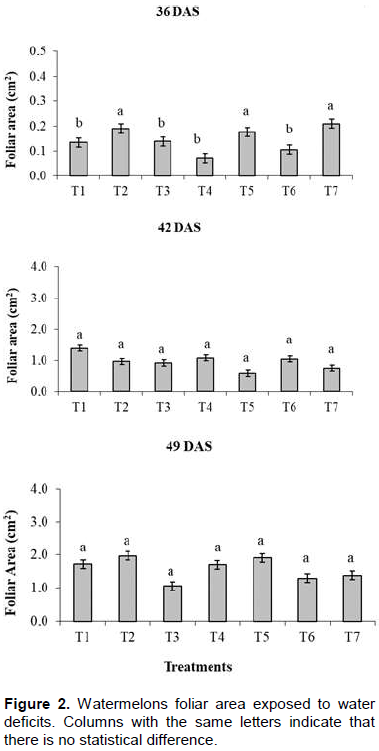 Melo et al. (2011) studied water deficit in the culture of melon and found that starting from its cultivation at 18 DAT, foliar area had constant growth for approximately 53 DAT.

In Figure 2, the smallest average leaf area was found in T5 and T7 (0.5997 and 0.7596 cm2, respectively), showing consistence with the results for the number of sheets in T5. It is observed in Figure 2 that, in general, there was almost a continuous growth of leaf area at 49 DAT, indicating that the leaves have expanded leaf area, thus ensuring the production of photoassimilate for the fruit and plant.

For Braga et al. (2011), reduction in leaf area is caused by the shading of leaves and also by intense photoassimilate allocation for the fruits and maintenance of existing organs. This causes acceleration in senescence and leaf abscission, reduces over cycle and plant efficiency in daily production of dry matter.

In evaluating the growth of watermelon subjected to different water qualities, Costa et al. (2012) discovered that with increased salinity of the water, there is less leaf area, while with reduced salts, the leaf area expanded; however, it was found that same irrigation was accomplished with salt water; there was growth in leaf area. This was also observed by Barros (2008). Superior results for leaf area were obtained by Dalastra et al. (2016), with a mean of 24.88 cm2.

In Figure 3, at 36 DAT, the highest growth of secondary branches was found in T2 and T7 with values of 7, 5, and 4.75,   although    there   was   no   statistically  significant differences in this variable analyzed during the entire experiment in all treatments. Applying the treatment will not affect the development of watermelon significantly. At 42 DAT, there are evidences of T6 as compared to other treatments. At 49 DAT, the mean was important in T4.

Evaluating different fertilizers, Oliveira et al. (2013), obtained a mean of 3.91 numbers of secondary branches, lower value than those obtained in this experiment in all the evaluation periods.

For Melo et al. (2010), there is a strong correlation between leaf area and the length of the branches in watermelon,  indicating  that the prolongation of the same provides an increase in the number of leaves and photosynthetic capacity improvement. They add that this correlation is influenced significantly by the amount of water available in the soil.

In Figure 4, this variable had the best development at 49 DAT. At 49 DAT, the largest main branch lengths were found in T4 (2.9 cm) and T5 (2.96 cm) treatments. Conflicting results were found by Freitas (1999); there was a high moisture deficit during the phenological and flowering stage. For research on density in the cultivation of melons, Ramos et al. (2009) discovered that there was not a significant effect on the length of the main branch. The results obtained in this experiment and by Ferraz et al. (2011) were higher than those obtained by Alencar et al. (2003) on melon under irrigation. In agreement with Melo et al. (2010), there is an interaction of leaf area with the length of the branches in watermelon; therefore, the higher the length, the higher the number of leaves. It leads to a satisfactory photosynthetic capacity of the plant, being instigated by the amount of water available to the plant.

Oliveira et al. (2013) while studying the growth and production of watermelon with mineral and organic fertilization had the main branch length of 1.17 m, with 1.05 m for treatment with bovine manure, 1.84 m for mineral fertilization and lower average with 0.83 m without fertilization. These results are lower than those obtained in this research.

There is a balance of water that favors better development of culture, proper treatment for the different phenological stages, greater efficiency of water use and better results.

Watermelon cultures submitted to two periods under water deficit had similar results with plants that did not suffer water stress. For these three appraisal times, the culture has a significant tolerance for water stress. When applying the correct amount of water to the plant, there is decrease in the amount of water used for irrigation and costs leading to satisfactory results.