Plant-parasitic nematodes are economically important pests of banana (Musa spp.) and compromise its productivity. Controlling nematode populations and good agronomic practices are pre-requisites for a good yield. A survey of farmers in the Rusitu Valley, Zimbabwe, was conducted to assess their current banana production practices and knowledge of plant-parasitic nematodes associated with banana. Respondents were selected using systematic sampling from three wards. Most farmers (61.9%) grew bananas as a monoculture, and 38.1% intercrop banana with other crops. All the farmers neither rotated banana with other crops nor practiced pest and disease control measures, and only 11.4% apply a fertiliser to their banana crops. Most (82.9%) farmers in Rusitu Valley had little or no knowledge of plant-parasitic nematodes that damage bananas. Sound extension programme in Rusitu Valley should educate farmers on the importance of managing plant-parasitic nematodes and using better banana crop production practices.

Rusitu Valley is one of the principal banana-producing areas of Zimbabwe and they grow well in its low-lying areas (Mudyazvivi, 2010). The smallholder communal farmers of the Rusitu Valley  produce  a  large  portion  of the yield, although these statistics are not available (Mwashayenyi, 1995; Svotwa et al., 2007). The crop is sold on the fresh market and due to its continuous fruiting habit, it is an important, reliable source of food and income to this banana-dependent community (Chitamba et al., 2013; Chitamba et al., 2014). Banana production has been declining over the years, and this has been attributed to poor agronomic practices, poor soil fertility and inadequate pest control. In many fields, individual plants have too many pseudostems for optimum production and are stunted, wilted, or have toppled (Mudyazvivi, 2010), possible indicators of poor production practices and plant-parasitic nematodes.
Plant-parasitic nematodes are a major pest of bananas worldwide (Gowen and Quénéhervé, 1990; Kashaija et al., 1994; Pattison, 2011) and thus a great threat to food security globally. Mwashayenyi (1995) reported that nematodes are a problem in the banana production parts of Zimbabwe and if control measures are not implimented, yield losses of up to at least 30% can occur. Cumulative losses due to a reduction in bunch weight and toppling may reach 75% in three cycles of production (Sarah et al., 1996). Most growers are unaware that nematodes are a cause of banana production problems and it is important to inform them (Brooks, 2004). There is a need, therefore, to assess the famers’ current knowledge of plant-parasitic nematodes and banana production practices and provide extension services to improve nematode management and good cultural practices before and after crop establishment.
Extension players from the government and non-governmental organisations (NGOs) have played roles in farmer training on banana production in these communities (Mudyazvivi, 2010), but no emphasis has been put on the management of the nematodes, the major pest of the crop. The present study would close this gap thereby creating an opportunity for sound extension services to improve yield of the crop through good nematode management. The findings from this research survey will create a platform for determination of the actual plant-parasitic nematodes associated with banana in major banana production areas of the country, thereby opening up the application of suitable nematode control and management options accordingly.
Though more work has been done on the management of plant-parasitic nematodes as well as on cropping systems, not much was recorded on the application of the findings in practical situations in the farmer’s fields. Banana farmers need to be trained about nematodes as major pests of the crop and be aware of the options available for good management of the pest to reduce yield loses. The present study also sought to find out the level of farmers’ knowledge on plant-parasitic nematodes associated with their cash crop as well as their knowledge on the crop’s production systems. This would help in coming with solutions by interested stakeholders (both government and NGOs) through extension services and necessary inputs required for good crop production and management. Moreover, this would in turn improve the well-being of these banana-dependent communities through enhanced  food  security  and  increased  income from surplus banana sales. The present study will also create a platform for further agronomic research surveys on determination of the actual plant-parasitic nematodes associated with banana in these major banana production areas of the country.
Considering the economic importance of banana in Rusitu Valley, the importance of proper agronomic practices and the destructive nature of nematodes to the crop, the present study was carried out with the main objective of assessing farmers’ knowledge on banana plant-parasitic nematodes as well as their current banana production practices in the area.

Study site
Rusitu Valley falls under Chimanimani District, Manicaland Province of Zimbabwe, located at an altitude ranging from 460  to 2000 m above sea level and latitude of 19°59'S and 32°49'E (Figure 1). The area is under Natural Region I of Zimbabwe’s Agro-ecological Zones, receiving an annual rainfall ranging from 1000 to 2000 mm and 635 mm effective rainfall. Generally, 70 to 80% of the rain falls from November to March and rainfall is also observed in the dry winter season. Cool season winter temperatures range from 12 to 15°C, while summer temperatures range from 18 to 20°C. Soils are podzols derived from the quartzite and schist as parent materials. 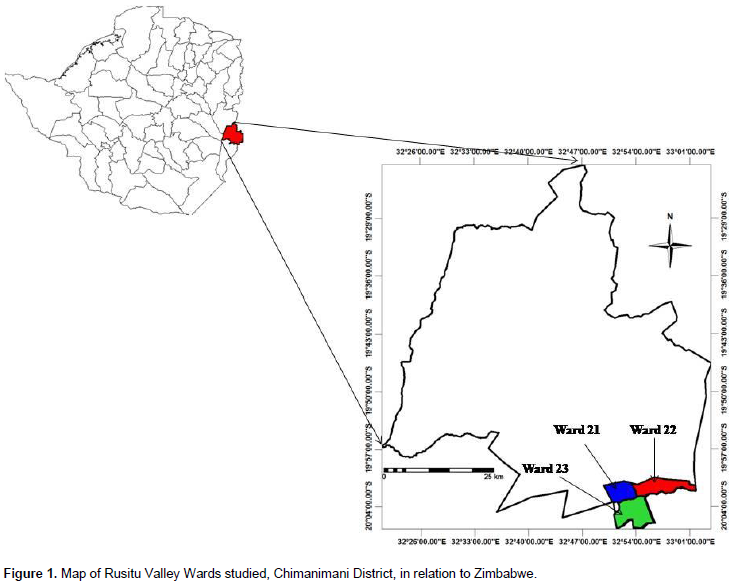 Sampling
An informal survey was first done and it included interviews with key informants as well as focus group discussions with the smallholder banana producers (farmers). Secondary information was reviewed from Agricultural Technical and Extension Services (Agritex) annual reports. Individual surveys were then conducted in March 2012 with smallholder banana farmers in Rusitu Valley using structured questionnaires. The survey population was made up of farmers in Wards 21, 22 and 23. From each of these wards, 35 farmers were sampled using systematic sampling technique, where every tenth homestead was interviewed using a pre-tested structured questionnaire. The face to face interaction with each respondent, allowed the enumerator to explain questions to the respondents to probe for more information. This was done to probe for information from smallholder farmers, the target group which was suspected of having low literacy levels. A total of 105 farmers, which approximately represented 10% of all smallholder farmers in Rusitu Valley, were interviewed in this study.
Data analysis
Data from survey was coded and analysed for both descriptive and quantitative statistics using Statistical Package for Social Sciences (SPSS) Version 16.0. Chi-square test (p<0.05) was used to determine the relationship/association among variables.

The study revealed that in Rusitu Valley, 61.9% farmers grow banana under the monoculture system while 38.1% intercrop it with other crops like pineapple, sugarcane, yams, and beans. None of the farmers interviewed practiced crop rotation or pest and disease control (Table 5). Only 11.4% of farmers among the interviewed apply fertiliser/manure to their banana crop while the rest do not (Table 5). Agritex, Agricultural and Rural Development Authority (ARDA) and NGOs were the extension services in Rusitu Valley who trained farmers on banana production practices (Table 6).

Lower percentage of female respondents from the survey indicates that most households in Rusitu Valley are headed by men. The findings on the farmers’ level of education are inconsistent with Boonstoppel and Mudyazvivi (2010) who reported that in Rusitu Valley, only 50% of the household heads completed primary education and a little over 30% had achieved secondary education.
Lack of knowledge on banana parasitic nematodes by the majority of the farmers can be attributed to poor extension services given by the extension players in Rusitu Valley, as most farmers indicated dissatisfaction with the extension services provided by the extension players (Table 7). This might be due to the fact that banana farmers in Rusitu Valley are scattered across mountainous terrain where accessibility and transport costs cause challenges in the provision of extension services (Mudyazvivi, 2010; SNV Zimbabwe, 2008) and hence causing a poor extension linkages between farmers and extension workers. Inadequate extension in Rusitu Valley can also be attributed to a very high farmer to extension worker ratio of 500:1 which is well above the recommended one of 200:1 (AGRITEX officer, personal communication). This will result in poor extension services being delivered to the farmers by the extension players.
Moreover, all of the extension workers interviewed have insufficient knowledge on pest management/crop protection, and nematodes are not emphasised as major banana pests of economic importance. Non-governmental extension players in the area like SNV trained farmers and pupils on banana production and emphasised on other agronomic practices, but never gave emphasis on nematode pests as shown in Table 8. This is evident in some of the banana production training manuals by SNV for farmers and pupils; for example, a training manual by Dzitiro (2010) does not have detailed coverage on control measures for banana pests like nematodes.
The manual just identified and suggested the control measures of semi-loopers, red spider mites, thrips and slugs as the only important banana pests without mentioning plant-parasitic nematodes. This might have contributed to the lack of knowledge on banana parasitic nematodes by the majority of the farmers in Rusitu Valley. From the survey, most farmers indicated that the areas covered by the extension players were mainly land preparation, fertilisation, irrigation, harvesting, postharvest handling and marketing, hence no knowledge on banana parasitic nematodes as pests.
Improper banana production practices like failure to apply fertiliser or implement pest and disease control measures by the farmers in Rusitu Valley can be attributed to inability to adequately acquire the required inputs such as fertilisers and pesticides by the farmers. This could be due to the fact that farmers tend to allocate the little available resources they have to maize, their staple food. Unavailability of farmer organisation as well as market access constraints also discourage farmers from investing much on banana. The status quo in the area is that bananas are fetching very little income, with most middlemen paying US$0.10 kg-1 (SNV Zimbabwe, 2008), while others only pay US$2 per bunch (1 bunch ≈ 15 kg). Farmers are therefore, not very keen to learn much about bananas and hence are not willing to invest much on them in terms of the required inputs.
Of the  farmers  who  practice  intercropping,  most  use crops like sugarcane, pineapple, yams, and beans. This could be mainly attributed to land maximisation as farmers have smaller allocation of land in the valley area (Mudyazvivi, 2010). Failure of the farmers to practice crop rotation on bananas can be attributed to the perennial nature of the crop as well as the labour involved in clearing/destroying the entire banana plantation in order to put an annual crop like maize. Replanting the banana crop in a new field also mean that farmers will have to wait for at least 12 months before they get something for subsistence from the crop. Furthermore, the banana crop rejuvenates its own stand through suckering hence no labour for replanting is needed. Thus farmers prefer to grow the banana under monoculture system to cut on unnecessary labour.

Most of the farmers in Rusitu Valley grow bananas under monoculture system; about one-third of the farmers intercrop banana with other crops; all the farmers neither rotate banana with any other crop nor practice disease and pest control measures. Very few farmers apply fertiliser/manure to their banana crop. Most of the smallholder farmers have low knowledge level on banana plant-parasitic nematodes as major pests of economic importance. The findings from the present study provide a foundation for implementation of sound extension services to the farmers in the banana-dependent community of Rusitu Valley on good production practices and basic integrated pest management for improved productivity.

This research was supported by the International Development Research Centre (IDRC), Canada, through the Bentley Cropping Systems Fellowship 2010. The authors thank all the farmers and extension officers who participated in the study. Special acknowledgement is accorded to Mr. and Mrs. Robert Mudada as well as Ms. Rumbidzai Mudada for the good hospitality during the entire period of this study.