Quality of planting systems in varieties of sugarcane

This study aimed to assess the operational quality of mechanized planting and semi-mechanized sugarcane for RB835054 and SP813250 varieties. The sugarcane has significant importance in Brazil, as it is a strong presence of culture in the economic field, with sugar and ethanol production. The mechanization of agricultural operations has been implemented in order to increase operational performance and reduce cost, thus presenting some possible advantages as the semi-mechanized plantation system. The experimental design was a completely randomized design. There were qualitative differences as regards the number of gems, damage to gems, parallelism and failure of deposition seedlings. The planting system, semi mechanized has better indices for the variables: total gems, viable gems and failures. For furrow depth, the values are similar between the two systems. Mechanized planting system showed better quality for variable row spacing. Among the varieties, there were similar values for almost all variables, but for failures in the deposition of seedlings, SP813250 variety obtained unsatisfactory results as compared to RB835054 in mechanized planting system.

Sugarcane (Saccharum spp.) is between socioeconomic highlights (Neto et al., 2006) and agribusiness in Brazil, which is the largest producer (Ripoli and Ripoli, 2010) and exporter of alcohol and cane sugar (Silva et al., 2008; Duarte Junior et al., 2008). Planting is the operation that involves the greatest knowledge of soil-plant-atmosphere interface, which provide conditions for culture, fundamental role of soil tillage operations (Tavares et al., 2010), contributes positively to the increase in productivity and influence in a positive way, the longevity of sugarcane (Barros and Milan, 2010; Braunack and McGarry, 2006), and faults in this context, according to Ferreira et al. (2008), may represent years of impaired productivity.
With the importance of this operation, Chaddad et al. (2010) reported that the mechanization of the plantation system was consolidated as a technique regarding the renewal and expansion of sugarcane plantations. In cultivation of sugarcane, mechanization of operations has been implemented due to the lack and cost of labor (Ripoli and Ripoli, 2010) and so it has been important due to several factors, leading to reduced costs, as compared to semi-mechanized planting system, replacing most of the labor-work in the operation due to increased operation of mechanized sets (Voltarelli et al., 2013) and maintaining the competitiveness of the sector, even in times of crisis (Ramos et al., 2015).
According to Ripoli and Ripoli (2010), semi-mechanized planting system is still the most used, in which the furrow operation and the groove cover is held mechanically, while the distribution of seedling is done in a manual way. In the mechanized planting system, sugarcane is harvested mechanically, being chopped into billets that are directed to the hopper planter whose function is to deposit them in the open groove immediately before and immediately closed after the operation (Ferreira et al., 2008).
In order to analyze the behavior and quality in mechanized farming operations, the aid quality control tools is a reality, because it indicates that the decrease in variability of the results is the quality of the operation, resulting in closer to the limits results specified (Milan and Fernandes, 2002; Toledo et al., 2008). The Statistical Process Control (CEP) aims to analyze the operation point to point and quickly identify changes in parameters correcting problems before they take place in several nonconforming items (Silva et al., 2008).
As the planting operation has great impact on the development of culture, and this has been mechanized gradually changing the entire scope of work at this stage, through this work, it is meant to denote the quality of different cropping systems, mechanical and semi-mechanized, the sugarcane crop in different varieties by the Statistical Process Control.

The study was conducted in the 2014 harvest in farm situated in the municipality of Monte Alto, São Paulo, in a commercial area of a sugarcane plant, with geodetic coordinates latitude of 21°16 'S and longitude 48°24' W, with average altitude of 640 m. The relief is predominantly soft and wavy, with a mean slope in the 8.8% range, with exposure facing the east and west. The climate is the mesothermal type with dry winter and average rainfall of 1,400 mm. The soil found in the area is sandy loam Paleudalf. The average water content in the soil was 16% at planting and determined its composition and characteristics through  the  removal  of  20  single samples of equal volume and depth (Table 1).

The experimental design was completely randomized design, analyzed in a 2x2 factorial design, with four treatments and 20 replicates per treatment, distributed in two planting systems (semi-mechanized and mechanized) and two varieties of sugarcane (RB835054 and SP813250). The dimensions of the sample plots were 10 by 3 m, being distributed at random, totaling 80 installments.
The control chart was the tool used as a quality indicator of the mechanized operations of sugarcane planting systems for the variable depth of grooves, row spacing, the total number of gems, number of viable gems per meter and failure deposition seedlings. The parameters evaluated and taken as quality indicators were chosen by the technical staff of the plant (Table 2). The semi mechanized planting process comprises the steps of: 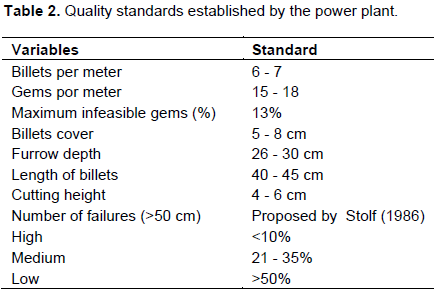 1. Mechanized furrow operation with fertilizer using 4x2 tractor TDA 133 kW of engine power at 2000 rpm and 2 lines trencher (1.5 m spacing) which operated at an average speed of 6 km/h,
2. Followed by the distribution of seedlings cut manually using a bucket truck with loading and unloading seedlings aided by a loader tractor 4x2 with claw 73 kW engine at 1800 rpm,
3. And mechanized groove mating with insecticide with a tractor of 73 kW engine, hedger 2 line (1.5 m spacing) reservoir tank 300 L capacity which operated with an average speed of 8 km/h. Mechanized planting process consisted of:
1. A sugarcane harvester 251 kW of engine power, mats, ready for harvest seedlings with parts protected by rubber, transhipments trucks with a capacity of 7000 kg, 4x2 tractor TDA power 133 kW engine at 2000 rpm,
2. And a planter of 2 lines equipped planting with tank for manure with 1250 kg capacity, storage tanks with 600 L tank and for storing the chopped plants with capacity of 6,000 kg.
The furrow depth is obtained by removal of the excess layer of soil that is deposited between the lines, placing an iron rod on the groove surface, with the aid of graduated rule positioned perpendicularly to the rod, measure the depth of sugarcane that are deeper in the groove.
Monitoring of the quantities of total and viable buds was held, with 30 m from the carrier, marking in each plot eight straight grooves and casting a jig by chance in each groove. The seedlings were cut at the ends of the template with the aid of a knife and then the number of viable and non-viable bud was counted. The percentage of viable gems was obtained by calculating the difference between the total number of gems and the total amount of viable gems.
For evaluation of failure deposition seedlings, which can be classified as voids which are in sugar cane planting rows, 30 m from the carrier was determined, if disassociating five plots per treatment, 10 m useful, measuring the distance between the seedlings deposited with the aid of graduated measuring tape. Faults above 30 cm are not acceptable.
Data analysis consisted of descriptive statistics to understand the behavior of data, analysis of variance and statistical process control through the Minitab program. The tool of individual control charts and moving range shows the range of values of each point, with the average indicated by a center line and control limits, higher (UCL) and lower (LCL), calculated based on the standard deviation of variables, to check if the results have variation sorting operation with or without quality, or if the operation is being influenced by special causes.
As in all variables, according to the Anderson-Darling test, the data were not normally distributed, the adjustment models were used,  as  listed  in  Table   3,   in   order   to   meet   the   standards parameters for subsequent tests applying the range of experimental data. 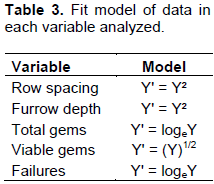 According to the parameters descriptive analysis found in Table 4, the average are close to the median and pre-established for the plant quality control standards, though the distributions of data were asymmetric for all variables at Anderson Darling test. The variable row spacing shows dispersion values (standard deviation and coefficient of variation) classified as low, except for the variable failures.

The asymmetry coefficient for variable spacing and depth values indicated negative nature, indicating a slight asymmetry in the left elongation curve and concentration data to the right of distribution. The remaining variables obtained moderate positive values having a concentration data distribution to the left and an elongation of the distribution curve to the right. The kurtosis coefficient showed all variables with positive values and leptokurtic distributions due to stretching or thinning of the data available curve (Montgomery, 2009). The results for the variable spacing between grooves and deep grooves corroborated with Marques and Pinto (2013) and Roque et al. (2010), with values from 1.40 to 1.50 and 0.25 to 0.40 m, respectively, for spacing and depth of the grooves.
According to the results obtained by analysis of variance and mean test, according to Table 5, the variables spacing and groove depth did not differ from their average for both planting systems and for the varieties, also, there was no interaction between the different factors corroborating Khedkar and Kamble (2008), where two planters of sugarcane (a full reed and other chopped cane) in Akola, India, finding no change to the spacing and depth of the grooves. For the total gems indicators and viable buds (Table 6), there was no difference in mean values for the planting and varieties used systems. For the variable failures in the deposition of seedlings, there was significant interaction between the factors cited, resulting in an increase of 8% failure  on the mechanized planting system, because in the interaction between the factors planting systems and varieties for the variable failures deposition seedlings, there was split of the data as indicated in Table 7. 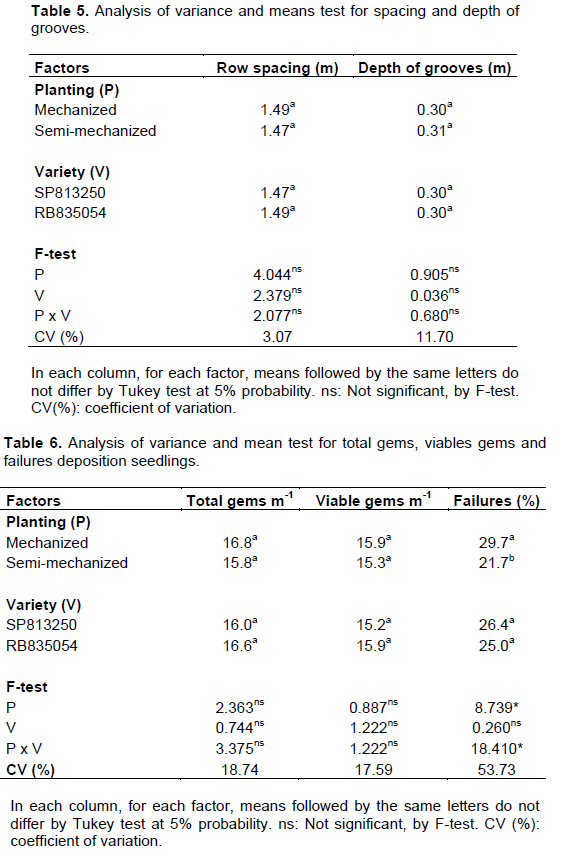 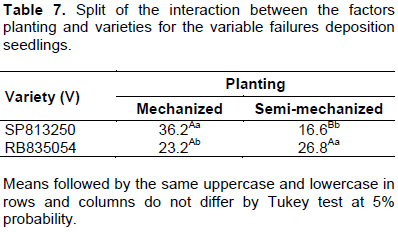 There were significant differences among varieties for planting system showing sensitivity to mechanization of variety SP813250 among the 6M's quality factors, machine stands out (components and active organs of the machine) as compared to labor (operating level and experience). In mechanized planting, a larger number of stalks per hectare must be used as compared to semi-mechanized, to obtain a homogeneous distribution of wheels per meter of furrow (Ripoli et al., 2006).
The non-transformed data were subjected to statistical process control (CEP) with the aid of individual control charts tool and mobile range for the variables. According to Figure 1, there was a stable performance for the indicator row spacing, where all the points were within the limits specified by the plant, with the exception of semi-mechanized planting system for RB835054 variety that met points with upper limit control, indicating a low quality for process and influence of special causes. In the mechanized system, both varieties showed stability data. The mobile range cards have greater stability in the mechanized system for variety SP813250. For groove depth (Figure 2), there was a higher quality of furrow operation, semi-mechanized operation of the mechanized system, explained by Ripoli et al. (2006) by the greater complexity of machine operation because of its dimensions. There was instability in mechanized planting process using SP813250 for the variables total and viable gems, was shown in Figures 3 and 4, because of this greater sensitivity to mechanization, as shown in Tables 6 and 7, within the 6M's, with principle of quality of the process operations (Montgomery, 2009). 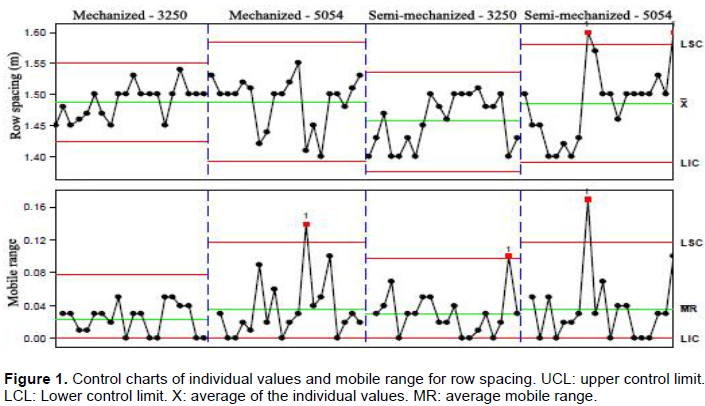 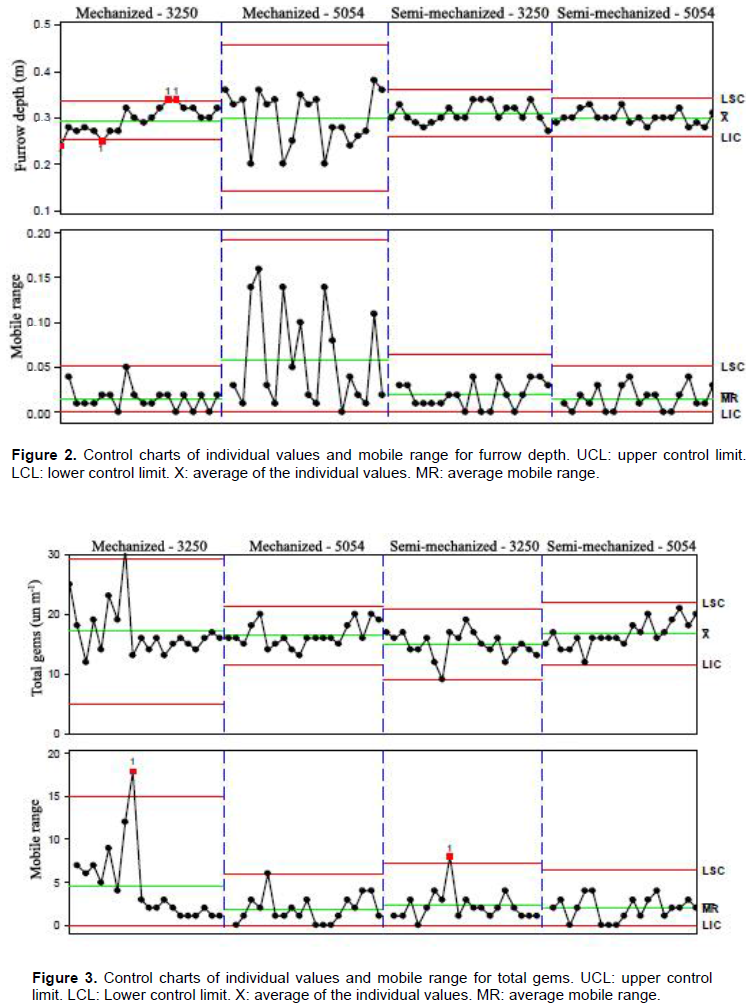 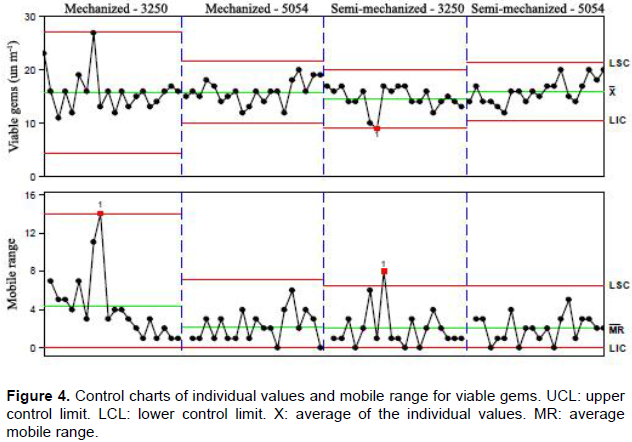 For failures in the deposition of seedlings (Figure 5), the mechanized planting process is stable, but there are larger amplitudes, especially for the variety SP813250. In the semi-mechanized, planting is checked with smaller amplitude, but with the presence of an "outlier" for variety RB835054 featuring semi-mechanized operation as unstable process. 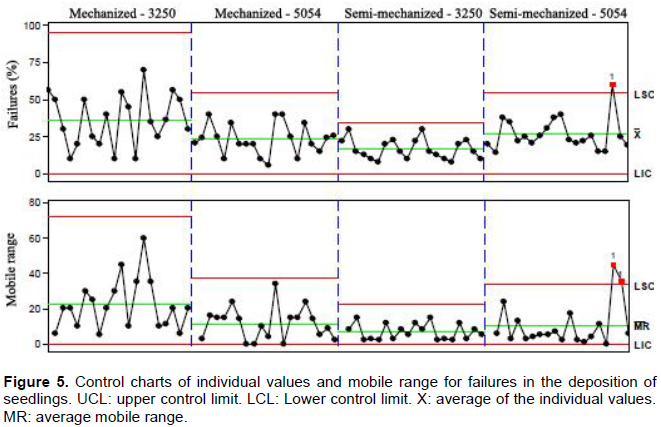