The objective of this study was to evaluate the growth and gross yield of sugar and ethanol of first-year sugarcane with water-saving irrigation via hose-drawn traveller using a line of sprinklers. The experimental design was randomized blocks, analyzed in a split plot scheme with four replications. The factors evaluated in the plots consisted of five levels water-saving irrigation applied after planting (0, 30, 45, 60 and 75 mm). The subplots were represented by four evaluation periods (90, 170, 250 and 330 days after planting - DAP). The sugar yield and gross alcohol yield were evaluated punctually at the end of the cycle to 330 DAP. In the central lines of the subplots, the morphological characteristics relative to plant height, culm diameter, internodes length, number of sugarcane plants, number of leaves, leaf area, leaf length and leaf width, were evaluated. The gross yields of sugar and alcohol were calculated using the raw sugar value determined by technological analysis of the broth from a sample with 12 culms per experimental unit. Water-saving irrigation provides a positive effect on leaf length, leaf area, plant height and number of sugarcane plants. Water-saving irrigation of 75 mm definitely promotes an increase of 30% in gross sugar and alcohol yield.

Currently, increases in productivity of sugarcane have been achieved combined with a higher quality and gross yield of sugar and alcohol from sugarcane raw material, in large part due to the use of irrigation (Simões et al., 2015).
The  use  of  irrigation  in  the  culture  of  sugarcane  is essential for growth, development and increased crop productivity (Souza et al., 2015). Irrigation provides productivity expectation well above the minimum required for renewal of the area favoring much greater potential of longevity of sugarcane (Silva et al., 2014).
There is a strong  correlation  between  levels  irrigation and the variables that define the quality of the raw material of sugarcane, mainly the content of total recoverable sugars, the total soluble solids (Brixo), the pol, the purity and the pol percent cane (PCC) increased in proportion with the irrigation water levels (Farias et al., 2009).
In the sugarcane culture, different types of irrigation are used, including irrigation by mechanized spraying, self-propelled, center pivot and subsurface drip irrigation (Quintana, 2010).
In self-propelled irrigation systems currently available in the domestic market, there are two distinct forms of water spray for crops: Irrigation bar or hydraulic cylinder (Prado, 2008). The use of self-propelled spraying with an irrigation bar is highlighted. The irrigation bar can replace the cylinder spray in lower slope areas, with the advantage of a more uniform distribution of water and droplets with a smaller diameter (Marouelli et al., 2013).
From the different investments aiming to increase the yield of sugarcane, water-saving irrigation should be highlighted, as it may result in an increased production without expanding the agricultural area (Dalri et al., 2008; Dalri and Cruz, 2002, 2008; Quintana, 2010). Thus, water-saving irrigation of sugarcane is one of the technological alternatives that pursue the increase in production in areas previously marginalized by water deficit (Teixeira et al., 2012).
Throughout its growth, sugarcane needs good soil moisture conditions to express all its productive potential (Silva et al., 2008). Consequently, the yield and the production of sugar and ethanol from irrigated sugarcane depend on the amount of water applied and on the irrigation management (Dantas Neto et al., 2006). Therefore, the hypothesis is that water-saving irrigation promotes a greater efficiency in the culture of sugarcane.
The objective of this study was to evaluate the growth and gross yield of sugar and ethanol of first-year sugarcane with water-saving irrigation via hose-drawn traveller using a line of sprinklers.

The experiment was carried out in July 2013, during the crop cycle of the cane plant of the variety SP83-5073 in the Boa Vista mill located in the municipality of Quirinópolis – GO, which has a soil classified as distroferric Red Latosol cerrado phase, according to Embrapa (2013). The climate is () classified according to Köppen and Geiger (1928) climate classification as tropical savanna with dry winter and rainy summer (Aw), with an annual rainfall between 1430 and 1650 mm, and drought period well defined between May and October.
The experimental design was randomized blocks, analyzed in a split plot scheme with four replications. The factors evaluated in the plots consisted of five levels water-saving irrigation (WSI) applied after planting (0, 30, 45, 60 and 75 mm). The subplots were represented by four evaluation periods (90, 170, 250 and 330 days after planting - DAP).
The experimental plots, in virtue of the proportion of the area wetted by the irrigation equipment, were 50.0 m long and 50.0 m wide (33 crop lines with 1.5 m spacing), with a total area  of  â€‹â€‹2500.0 m2. The subplots were composed of 5.0 m of 2 lines, located in the center of the plot.
The application process was made according to the management adopted in every area of â€‹â€‹commercial cultivation of the mill. During soil preparation, spread fertilization was carried out with incorporation by average grade for the layer 15 cm deep. The planting fertilizer used was according to the soil analysis (Table 1) in accordance with the recommendations of Sousa and Lobato (2004). The recommendation was 200 kg ha-1 of P2O5 in the form of simple superphosphate. As for the K and N sources, the concentrated stillage enriched with urea, totaling 180 kg ha-1 K2O and 100 kg ha-1 nitrogen was used. For micronutrients, the dose of 100 kg ha-1 in the form of granulated Fritted Trace Elements (FTE), being 4 kg ha-1 zinc, 2 kg ha-1 boron and 2 kg ha-1 copper was used. The nitrogen coverage fertilization was performed 60 days after planting, where 120 kg ha-1 N (urea) were applied on both sides of the lines. 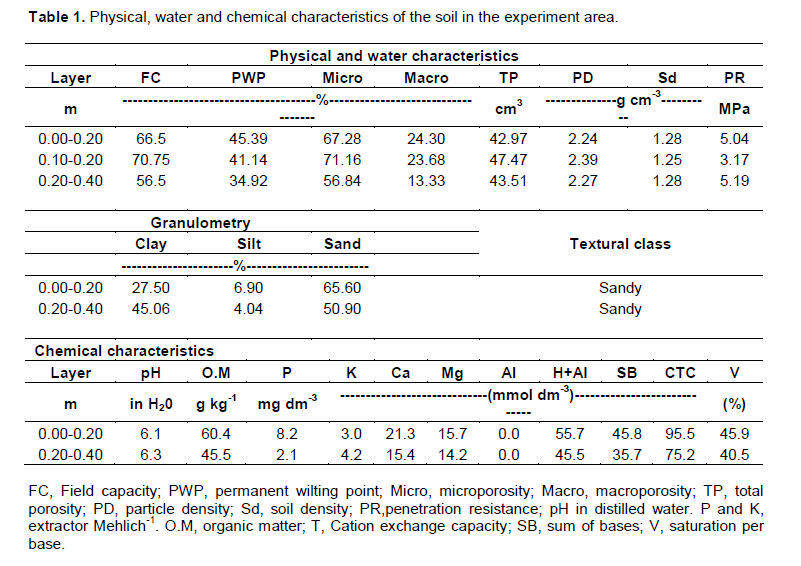 Water-saving irrigation was carried out by a self-propelled reel winder, model 140/GSV/350-4RII, coupled to an irrigation bar, model 48/54; MDPE tube with 140 mm outer diameter and length of 350 m; wall thickness of 10.3 mm, with lattices 24.5 m long on each side, totaling 49.0 m of adjustable structure, allowing the irrigation of sugarcane to 4.0 m high, with height compensation system through telescopic wheels installed along the lattices, the central car of the bar was operated with 3.0 m width. The emitters spaced at 1.85 m were used, totaling 26 emitters; the working pressure in the bomb was 10 Kgf cm-2 and in the reel was 5 Kgf cm-2; the reel was operated with an average wind speed of 14.5 m s-1. The application of the water volume was located between the lines of the varieties of sugarcane, but the wetness of the experimental area was total.
During the crop cycle, variety SP83-5073, weather data were collected daily, obtained by the meteorological station of the mill; being the reference evapotranspiration (ET0) calculated according to the equation of Penman-Monteith-FAO/56 (Allen et al., 1998) (Table 2). 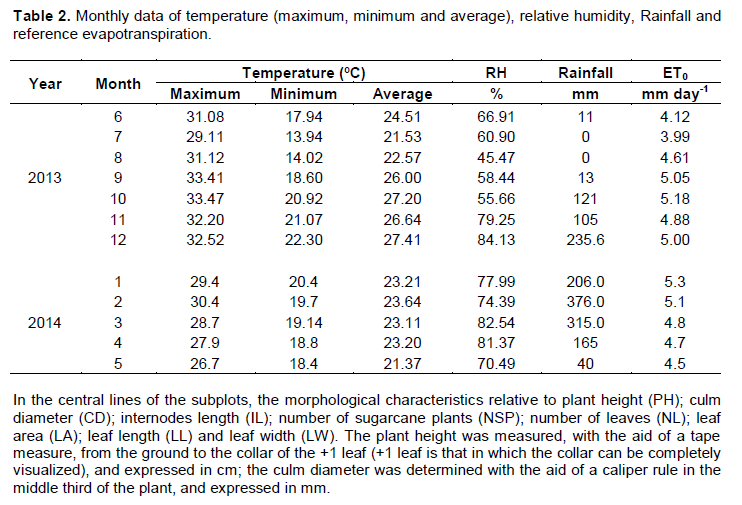 Where: Ay = gross alcohol yield in liters per ton of sugarcane in m3 ha-1; PCC = percentage of raw sugar contained in the culms and determined in the laboratory; F = stoichiometric conversion factor of glucose to a sucrose molecule plus another fructose molecule, equal to 1.052; ARL = percentage of free reducing sugars, whose values â€‹â€‹range from 0.7 to 0.85% (the distillery uses 0.7 for a high PCC); GLf = Gay Lussac factor of 0.6475; PC = culms production in t ha-1.
The data were submitted to analysis of variance by F test at 5% probability, and in cases of significance, regression analysis was performed to the water-saving irrigation depths and the evaluation dates, using the statistical software SISVAR (Ferreira, 2011).

The number of leaves of sugarcane plants at every 80 days had an increase of 9.1% (Figure 1A). The maximum leaf width sugarcane plants was observed at 225 days after planting (approximately five leaves), which is 21.7, 3.6, 0.72 and 12.9% higher than that observed at 90, 170, 250 and 330 DAP, respectively (Figure 1B). Silva et al. (2012) observed that the maximum area of individual leaves respond to the length of the leaves as soon as the width tends to stabilize.
Leaf length and leaf area adapted to linear growth in function of water-saving irrigation in sugarcane plants. According to the regression equation obtained, there was an increase of 4.9 and 3.2% for each 15 mm increase for leaf length (at 90 DAP) and leaf area of sugarcane by using water-saving irrigation (Figure 2A and C). The leaf area had an increase of 14.7% every 80 days in function of days after planting (Figure 2D). 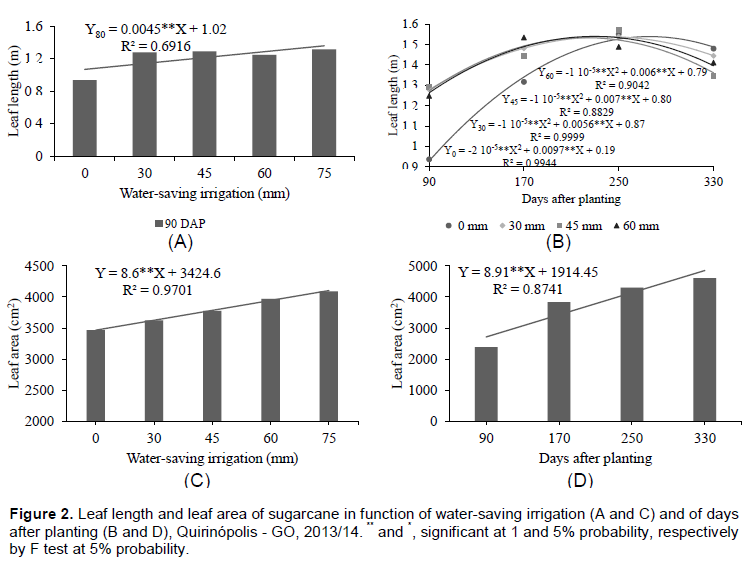 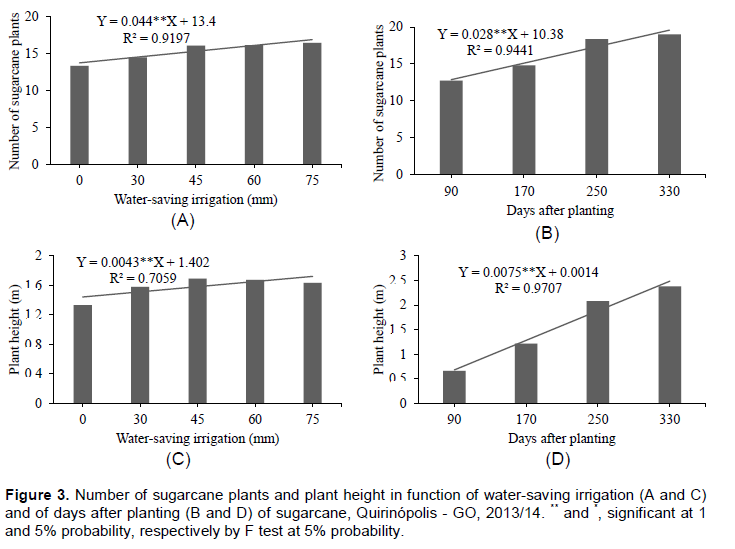 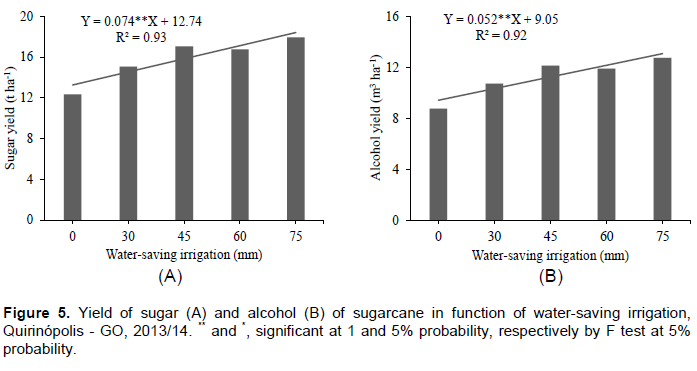 Water-saving irrigation provides a positive effect on leaf length, leaf area, plant height and number of sugarcane plants. Water-saving irrigation of 75 mm definitely promotes an increase of 30% in gross sugar  and  alcohol yield. The results of this study demonstrate the viability of adopting the practice of water-saving irrigation. This suggests the need of more studies in the conditions edaphic and climatic of the region of southwest Goiano.

The authors would like to thank, most sincerely, the Ministry of Science and Technology (MCT), the Foundation for Research Support of the State of Goiás (FAPEG), the Coordination for Upgrading Higher Institution Personnel (CAPES), and the Brazilian Council for Scientific and Technological Development (CNPq) for funding the current scientific project.