Salt stress is one of the most adverse abiotic environmental factors that inhibit growth and productivity of plants. This experiment was carried out at physiology laboratory, Addis Ababa University. Sorghum landraces (sorcoll163/07 and sorcoll141/07) were collected with many other landraces from different sorghum growing regions of Ethiopia and they were selected for their stay-green traits and drought tolerance performances. The objective of this study was to evaluate germination potential of sorcoll163/07 and sorcoll141/07 sorghum seeds at different salt concentration levels in order to investigate salinity stress tolerance during germination. Twenty five healthy and uniform seeds were selected and treated using distilled water, 0.5% hypochlorite, and 10% ethanol. Four levels of salt concentrations (50, 100, 150 and 200 mM) and control with three replications were kept in completely randomized design (CRD). Higher germination percentage was recorded from 50 mM salinity from both sorghum landraces. Highest germination percentage of sorcoll163/07 and sorcoll141/07 were 96 and 98.6, respectively from 50 mM salinity level which was higher than the control; however, germination percentage was declined as the salt concentration increases. There was a significant p≤0.001 difference between root and shoot length, fresh root weight, as well as dry root and dry shoot biomass of two sorghum landraces between control experiment at 100, 150 and 200 mM salinity level, otherwise no significant difference was observed between the control and 50 mM salt concentration. Generally, sorcoll141/07 showed a higher germination percentage and had a higher root length, fresh weight and dry root weight than sorcoll163/07 even at 200 mM of NaCl level.

Salinity is an excess accumulation of water-soluble salts in the soil that adversely affect agricultural production and environment (Rengasamy, 2006). Salt stress is one of the most adverse abiotic environmental stress factors that inhibit growth and productivity of plants (Ashagre, 2013). It is also one of a major stress factors, subsequently,
reduces agricultural production (Lauchli and Grattan, 2007). Salt stress becomes a big worry when excessive amount of soluble salts occurs in the soil either naturally or as a result of mismanaged irrigation practice (El-Swaif, 2000). It is known to be the most environmental stress factors which challenges field crops especially in semi arid and arid part of the world where rapid expansion of irrigated agriculture is very common (EL Naim et al., 2012).
There are different sources of soil salinity such as water sources from ground water and waste water has the highest salt concentration (Grattan et al., 2002). Use of excessive fertilizer in limited land resources in need of surplus food may enhance soil salinity (Savci, 2012). Global scarcity of water resources and an increasing salinization of soil are the major limiting factor of plant growth (De Oliveira, 2013). It becomes one of the most conspicuous stress factors in arid and semiarid regions, where rainfall is limited, high evapo-transpiration and high temperature associated with poor water and soil management (Jaleel et al., 2007).
There are different effects of soil salinity on the plant by restricting nutrient uptake, cause ionic imbalance and toxicity with the potential consequence on population dynamics (Jung and Lee, 2005). The most common features exhibited by saline soil are delayed germination, high mortality rate of seedlings, poor performances, stunted growth as well as poor yield (Zhong and Lauchli, 1994; Grattan et al., 2002; Jamil et al., 2006). Salinity is known by perturbing physiological process of the plants (Noreen and Ashraf, 2008). When the stress factors persist, it may cause injury of the plant and in extreme case leads to death (Jaleel et al., 2007). Osmotic inhibition and ionic toxicity are a few among the others (Munns et al., 2006).
Seed germination is one of the critical plant developmental stages and their salt tolerant during germination is the prominent stages for a better establishment of plant in saline soils (Keshavarizi and Mohammed, 2012). The ability of the seeds to germinate at high salt concentration level of the soil is important for the better survival and maintenance of plants (Bojovic et al., 2010).
There are about 3.6 million ha salt affected areas in Ethiopia with several degree levels (FAO, 2000), about 36% (44 Mha) of the country’s area are potentially susceptible to salinity problems (Tamirie, 1994). Eleven million ha of Great Rift Valley land is salt affected, which is 9% of the population lives are affected by soil salinity (Sisay, 1985; Fantahun, 2007). Salt affected areas has been increasing from 6 to 16% of the total land area of Ethiopia in recent years and expected to be more severe in the future (Sissay, 1985).

This  experiment  was  conducted  at  the   Physiology   Laboratory, Department of Plant Biology and Biodiversity Management, Addis Ababa University. Tempeparature and relative humidity was recorded daily using thermohydrometer (Thermohydrometer meter, Yichun, Taiwan).
A total of 25 petri dishes were washed properly and autoclaved and in the meantime, twenty five healthy seeds free from insect damage of sorcoll 163/07 and sorcoll141/07 sorghum landraces were washed using distilled water and soaked for 5 min using 10% ethanol and finally treated by 0.5% sodium hypochlorite for 2 min and left overnight to dry.
Solutions with different salt concentration were prepared such as control (distilled water only), 50 mM, 100 mM, 150 mM and 200 mM concentration of sodium chloride solution. The treated seeds were spread over the petri dish on Whatmann filter paper and 10 ml from each salt concentration were added over the filter paper. Three replications were prepared for all the treatment and finally the petri dishes were kept in plant physiology laboratory in complete randomized design (CRD). Emergence of the radicle and the plumule was visited everyday and the solution was added after observing the moisture on the filter paper and the number of emerged radicles and plumules were recorded.
After the 8th day, the shoot and roots were separated from all the treatments. Root and shoot length were measured using ruler. Using paper pocket, both the roots and the shoots were oven dried at 70°C for 24 h, finally the dry weight of each parts were weighed using analytical balance with very high precision analytical balance (±0.0001).
Data analysis
Data were analyzed using Statistical Package, SPSS (Version 16, SPSS Inc. and Chicago, USA). The data were subjected to analysis of variance. Means were compared at 99% confidence interval to test the significant differences between two sorghum landraces. All graphs were generated using Sigma plot software.
Germination percentage (GP) was calculated using the following formula: GP=Ni/N×100, where Ni=the number of germinated seed at the last day and N=the total number of seeds following Kshavarzi et al. (2011).

Maximum and minimum temperature of the room was 26.7 and 18.5°C, respectively until the end of this experiment (Table 1). 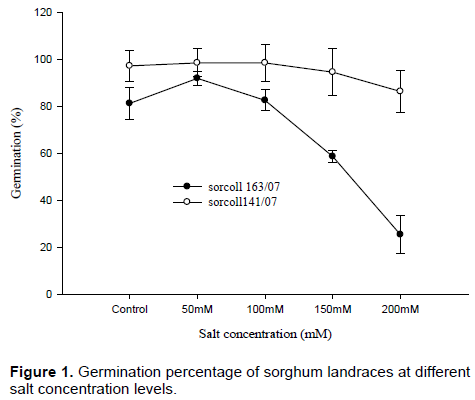 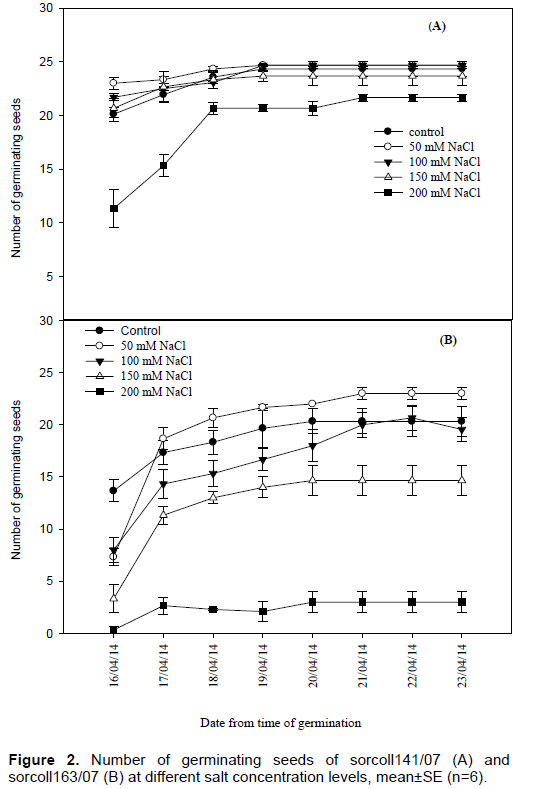 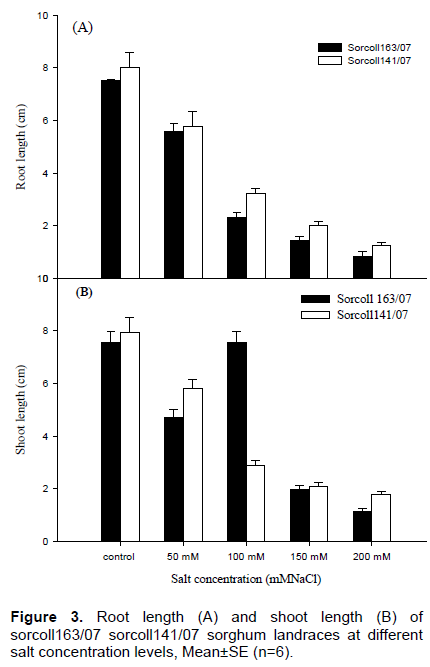 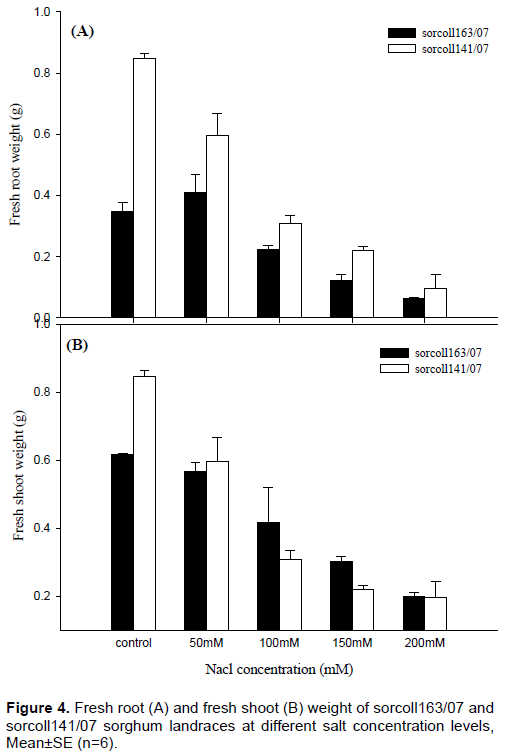 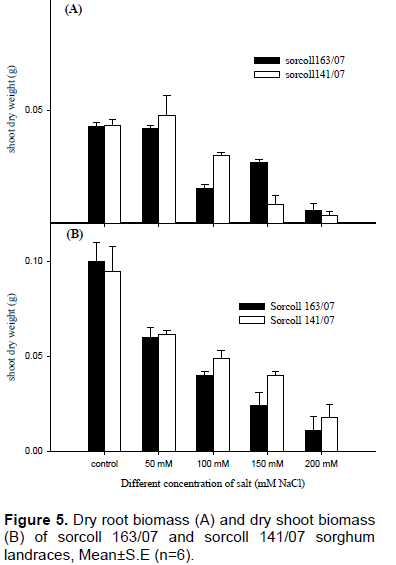 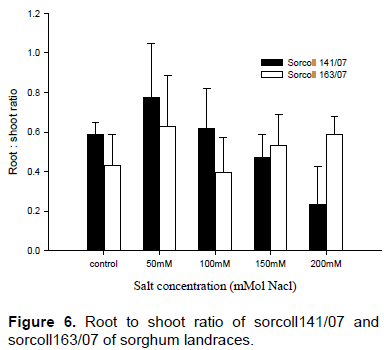 Root and shoot lengths are the most important plant parts affected by salt stress, because roots are directly contacted with the soil and absorb water from the soil and supply to the shoot (Asaadi, 2009). Salinity affects plant in many ways such as inhibition of nutrient up take (Houle et al., 2001), perturbation physiological process (Noreen and Ashraf, 2008), inhibition of osmotic and causes ionic toxicity (Munns et al., 2006). Delayed germination and high rate of mortality (Jamil et al., 2006). From our finding, germination percentage of sorghum seeds was affected due to higher salt concentration; however, there was a variation in response within a variety of same species (Nasri et al., 2012). As the salinity level increases, seedling growth was affected at early stage in all cultivars, however, there were differences in responses to different salt concentration (Gholamin and Khayatnezhad, 2011).
Both sorghum landraces showed higher root and shoot length at 50 mM than the control experiment and sorcoll141/07 sorghum landraces showed a higher germination percentage than sorcoll163/07, however, as the salt concentration increases germination percentage declined (Figure 1). A higher salt concentration significantly reduces germination percentage, germination rate and shoots and root length (Jamil et al., 2006). Similar result revealed that seed germination was reduced for salt sensitive lettuce variety, whereas salt tolerant variety showed higher germination percentage of the same salt concentration level (Nasri et al., 2015).  However, in most cases the highest percentage of germination of the seed was observed in the distilled water or at very low salinity level (Datta et al., 2009).
Salinity caused reduction in shoot and root elongation, leaf expansion and dry matter accumulation significantly decreased with increasing soil salinity (Bhatt et al., 2008). Growth and photosynthesis are affected when plants are growing under saline condition, because stomatal closure reduces intercellular CO2 concentration (Kaymakanova and Stoeva, 2008).
Root and shoot dry biomass of both sorghum landraces were affected towards to high salt concentration in both sorghum varieties, however, sorcoll141/07 showed a higher value in shoot biomass (Figure 5B) and root biomass (Figure 5A) for the same salinity level than sorcoll163/07. This result in agreement with the report Al-Masrkri et al. (2010) reported that root and shoot fresh weight, dry root and shoot weight and leaf area were significantly affected by salinity level.
Root to shoot ratio of sorcoll/163/07 was not significantly reduced by different salt concentration levels whereas  sorcoll141/07  showed  a  higher  root  to  shoot
ratio as the salinity level increases, this might be due to the fact that sorcoll141/07 had the lowest root to shoot ratio as the result of the lowest root dry biomass (Figure 5A) and the highest dry shoot biomass (Figure 5B).