Trichoderma- a potential and effective bio fungicide and alternative source against notable phytopathogens: A review

Trichoderma, is a useful, filamentous fungi and they are cosmopolitan in nature which have attracted the attention because of their multi prong action against various plant pathogens. There are several biocontrol mechanism employed by Trichoderma against plant pathogens, these include release of hydrolytic enzymes that degrade cell wall of phytopathogenic fungi, competition for nutrients, parasitism, and antibiotics. Trichoderma spp. generally grows in its natural habitat on plant root surface and therefore it controls root diseases in particular.

Modern agricultural practices are getting affected by various problems such as disease, pest, drought, decreased soil fertility due to use of hazardous chemical pesticides, bio-magnification and various environmental problem. The fungal disease is one of the major constraints for agriculture productivity in India losses is about 22 to 25% of its crops due to fungal diseases each year. This damage is estimated to be Rs.50,000 crores annually. Although, use of fungicides in crop protection has certainly contributed for minimizing yield losses. So, indiscriminate and unscientific use chemical pesticides for prevention of various fungal disease leads to cause of resurgence of new pest, fungicidal resistance, ultimately affecting the land, soil fertility and remains toxic when consumed by humans and animals. Their application needs care and must only be used when the threshold limits exceeds. As a result, there is a need for some eco-friendly biocontrol agents that help in resolving problems. Hence, there is a need to look forwarded to develop practices and eco-friendly bio-control in order to reduce the dependence on synthetic agrochemicals. Therefore, recent trends favor the use of alternative substances derived from natural plant extracts, biological control and several others components. The various types of biological control agents such as bacteria and fungi are involved in biocontrol activity. Biological control is an essential part of these strategies as a substitute of agrochemicals. 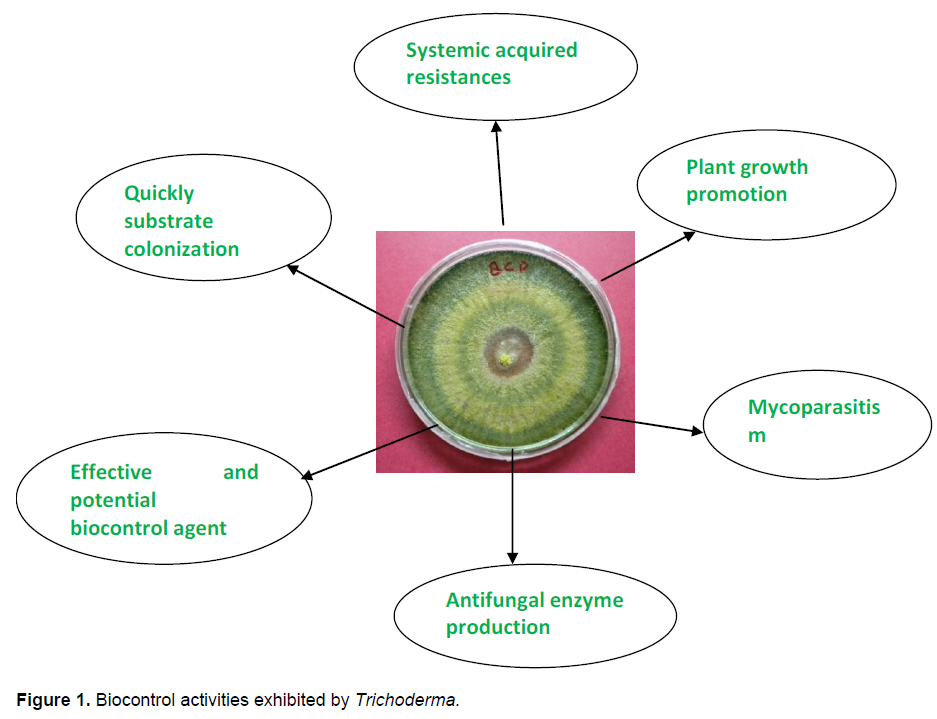 Biological control agents (BCAs) offer an alternative to the chemical control of fungal phyto-pathogens as they can kill or limit the growth of pathogens without harming the host. Various bacteria, fungi and protists are known to
have such features. They do so either by one or many of the following mechanisms: Competition for nutrients, secretion of lytic enzymes, secretion of toxic metabolites and direct parasitism on host (Agrios, 2005). Members of the genus Trichoderma have shown promise as BCAs (Elad et al. 1983; Chet 1987). The first practical control of crop disease with Trichoderma was in the control of root rot causing (Armillaria mellea) in citrus. It has since been very effectively used for the control of large number of soil borne plant pathogen like Phytophthora, Rhizoctonia, Sclerotium, Phythium, Fusarium, Sclerotinia, and Galumannomyces. Presently, entrepreneurs are mass producing its three main species viz, Trichoderma harzianum, Trichoderma viride and Trichoderma koningii.
They also have important economic impact, due to their ability to produce hydrolytic enzymes, secondary metabolites and degradation of xenobiotics (Harman et al., 2004). This versatile fungus is also used commercially in food and textile industry and as a source of transgene to develop disease resistance transgenic plants. This ecological and economic relevance of the genus Trichoderma makes it an ideal candidate as a model organism in various studies, spanning from molecular plant pathology, plant protection, biological control, and microbial ecology. Due to their rapid growth and capability of utilizing different substrates, species of this genus are often predominant components of the soil mycoflora in various ecosystems, such as agricultural, pasture, forest, salt marsh, prairie and desert soils over a wide range of climatic zones.
Trichodrma spp, native isolates must therefore be isolated and characterized for BCA activity so that they could be integrated into integrated pest management.
Fungal species belonging to the genus Trichoderma are worldwide spreads and easily isolated from soil by serial dilution technique. They are known as imperfect fungi, because they have no sexual stage. Faster growth rate in culture and production of conidia that are varying shades of green characterize fungi in the genus (Chaverri and Samuel, 2003). Trichoderma species are fungi with telomorphs belonging to the Hypocreales order of Ascomycotina division.
Trichoderma species are being shown to be the anamorphs of hypocrea species. Hypocrea was first described by Elias Fries in 1825 based on sphaeria rufa pers.: fr., aspecies with hyaline, ascospores.
In order to make the most effective use of biological control agent we must understand the mechanism of biological control. The various biocontrol mechanisms employed by Trichoderma are as follows (Figure 1):
1. Induced systemic resistances: Induced systemic resistances (ISR) of plants against plant pathogens is a widespread phenomenon with respect to the underlying signaling pathways. After primary pathogen infection, plants are capable of producing an immune response which is known as systemic acquired resistances, the expression of pathogenesis gens such as acidic and basic β -1, 3 glucanase and chitinase and endochitinase are involved for the activation of SAR. The peptides, proteins and low molecular weight compounds produce by Trichoderma and these compounds induce ethylene production, hypersensitive response and other defence related reactions in plants.
2. Fungistasis: Most soils inhibit fungal germination and growth to a certain extent, a phenomenon known as soil  fungistasis .Trichoderma grow rapidly when applied in soil, because they are resistant to many toxic compounds, including fungicides ,herbicides and pesticide such as DDT.
3. Production of cell wall degrading enzymes (CWDES): Chitinase, β -1, 3 glucanase produced by some Trichoderma species they are key enzymes in lysis of cell wall during their mycoparasitic action against plant pathogenic fungi.
4. Competition with other fungi: Trichoderma and other plant fungi feed on the waste products of the plant. Because Trichoderma can colonize the roots very rapidly it has a benefit in the competition for these nutrients.
5. Mycoparasitism of other fungi: Trichoderma can parasitize other fungi and release a digestive enzyme which breaks down the chitin in these fungi. In this way nutrients will be extracted from theme.
6. Secondary    metabolites:    They    are    producers   of extracellular proteins, and are             best known for their ability to produce enzymes that degrade cellulose and chitin. They also produce other useful enzymes such as endochitinase, chitinase, glucanase cellulase play an important role in biocontrol activity. Different strains produce more than 100 different metabolites that have known antibiotic activities. It is found that large variety of volatile secondary metabolites produced by Trichoderma such as ethylene, hydrogen cyanide, aldehydes and ketons which play an important role in controlling the plant pathogens (Table 1).

In India talc based formulation was first of all developed in Tamil Nadu Agriculture university, Coimbatore (Jeyarajan et al., 1994). Talc based formulation is formed by both solid and liquid state fermentation.
Solid state fermentation
This is the most common method for Trichoderma mass production. Several grains like sorghum, corn, rye and millets are used as substrates for Trichoderma mass production. These grains are moistened, sterilized and inoculated with Trichoderma spp and incubated for 10 to 15 days. Trichoderma produces dark green coloured spores covering the whole grain. These grains can be powdered and mixed in sterilized talc powder in 1:9. The finally processed product can be used for soil and seed treatment. Solid state fermentation is used for commercial level production; the main disadvantage associated with this technique is that it is very tedious and time consuming.
Liquid state fermentation
In liquid fermentation system Trichoderma is grown in liquid medium in shaker and ferment or and after the incubation period completes the fermented media is mixed in sterilized talcum powder in 1:9 ratio. Maximum biomass of Trichoderma can be produced in short time by using appropriate fermentation media and fermentation conditions such as aeration, agiatation, temperature, ph and antifoam control. Project Directorate of Bilogical Control (PDBC) Banglore revealed that maximum amount of biomass and viable propagules of T. harzinum/ T. viride can be obtained within 96 h of fermentation in a fermentor with aeration, agitation, temperature control (Prasad and Rangeswran 1998) (Table 2).

AGRO DOMESTIC WASTES AS SUBSTRATES FOR THE MASS MULTIPLICATION OF TRICHODERMA

SELF LIFE OF TRICHODERMA FORMULATIONS

Application of Trichoderma formulations
Several methods are recommended for the application of Bio fungicides for the successful management of plant diseases. Delivery and establishment of Trichoderma (bio fungicide) also play a very important role to the site of action (Table 4). The most common methods of application of Trichoderma are, by seed bio priming, Seedling dip, soil application and wound dressing, and foliar spray is rare.
Seed treatment
Seed treatment is one of the easy and effective method. In seed treatment seed is coated with dry powder/ dusts of Trichoderma just before the sowing. For commercial purpose, dry powder of antagonist is used at 3 to 10 g per kg seed based on seed size (Mukhopadhyay et al., 1992). T. harzianum, T. virens and T.viride were found to be effective seed protectants against Pythium spp. and Rhizoctonia solani (Mukherjee and Mukhopadhyay, 1995).
Seed biopriming
In this method seeds are treated with Trichoderma formulation and incubated under warm and humid conditions just prior to the emergence of radical. This technique has potential advantages over simple coating of seeds as it results in rapid and uniform seedling emergence. Trichoderma conidia germinate on the seed surface and form a layer around bioprimed seeds. Such seeds tolerate adverse soil conditions better.
Root treatment
Seedling roots can be treated with spore or cell suspension of antagonists either by drenching the bioagent in nursery beds or by dipping roots in bioagent suspension before transplanting. This method is generally used for the vegetable crops, rice where transplanting is practiced (Singh and Zaidi, 2002).
Soil treatment
There are several reports on the application of biocontrol agents to the soil and other growing media either before or at the time of planting for control of a wide range of soil-borne fungal pathogens (Baby and Manibhushanrao, 1996). Such applications are ideally suited for greenhouse and nursery.

Aerial spraying/wound dressing
Trichoderma has been successful applied to the aerial plant parts for the biocontrol of decay fungi in wounds on shrubs and trees (Papavizas, 1985).

Bio fungicide is one of the best alternatives against some notable plant pathogens. The limitations to biocontrol use are due to lack of knowledge on the ecology of the rhizosphere and use of in vitro antagonism for selection of biological control agents. But, the advantages of this method are more. Trichoderma spp. that are common saprophytic fungi found in soil, have been investigated. And it has been emerged as a as potential biocontrol agents because of their ability to reduces the incidences of disease caused by plant pathogenic fungi.