Behavior and water needs of sesame under different irrigation regimes: Analysis of growth

The aim of this work was to evaluate the growth of sesame BRS 196 CNPA G4 in different irrigation depths (305, 436, 567 and 698 mm), applied on the basis of crop evapotranspiration– ETc (the depth of 567 mm was equal to 100% ETc). It was conducted at Embrapa Cotton, in Barbalha County, Ceará State, Brazil, 2012. The experiment was in randomized blocks, with treatments distributed in plots with three replications. The ETc was calculated by multiplying the reference evapotranspiration (ETo), determined by the Penman-Monteith method, by the crop coefficients (Kc), recommended for each phenological stage of the crop and by FAO. For the other irrigation treatments, the ETc was multiplied by 0.4, 0.7 and 1.3 (40, 70 and 130% of ETc). Primarily, height, stem diameter, leaf area and leaf area index were measured at 27, 48, 69 and 90 Days After Emergence (DAE), and then the absolute and relative growth rates in height, stem diameter and leaf area were estimated. It was concluded that height, stem diameter, leaf area and leaf area index of sesame BRS 196 CNPA G4 increased with irrigation; the highest growth occurred until 70 or 75 DAE, and the greatest growth was obtained, in general, in 698 mm of irrigation depth.

Sesame (Sesamum indicum L.), is considered economically underused (Were et al., 2006), by the International Plant Genetic Resources Institute (IPGRI). This is because it is an alternative source of protein for consumption and enrichment of other products, in phytotherapic and phyto-cosmetic segments (Chakraborthy et al., 2008). In the Northeast, its exploration remains at subsistence levels (Andrade, 2009).
Arid and semi-arid regions are characterized by irregular and low rainfall and high evaporation. Therefore, since it supplements the natural rainfall, irrigation enables an increase of yield, especially in these regions (Farias et al., 2000). Sesame tolerate drought, but not waterlogging, this means that, once established, it is resistant to high water pressure in the soil more than other crops, but it does not grow well with little water (Kim et al., 2006).
Thus, it is necessary to check the crop’s behavior in different applied volumes of water and identify the stages of higher consumption or critical periods where the lack or excess of water causes a growth decrease (Bernardo et al., 2009). The chronological monitoring identifies the regulatory mechanisms of periodic rhythm of growth (Abdulla et al, 2011; Leela et al., 2011). Despite using only primary data, non-destructive growth analysis is a useful and efficient tool, and may be complete if growth rates are calculated (Fontes et al., 2005; Cardoso et al., 2006; Barcelos et al., 2007).
This study aimed to evaluate the growth of sesame BRS 196 CNPA G4 in different irrigation depths applied on the basis of crop evapotranspiration (ETc).

The data of the plant height, relative growth rate in height, stem diameter and the absolute and relative growth rates in stem diameter was set to the non-linear model sigmoidal-logistic regression (Equation 1). Leaf area and leaf area index is set to non-linear regression model peak-normal log (Equation 2) (Figures 1 to 7). Growth height (H) is exponentially constant until it reaches a maximum at approximately 70 DAE from when it virtually stabilizes (Figure 1), confirming Allen et al. (2006) and Santos et al. (2010), using sesame BRS 196 CNPA G4 too, and Grilo Junior and Azevedo (2013) with sesame BRS Seda. 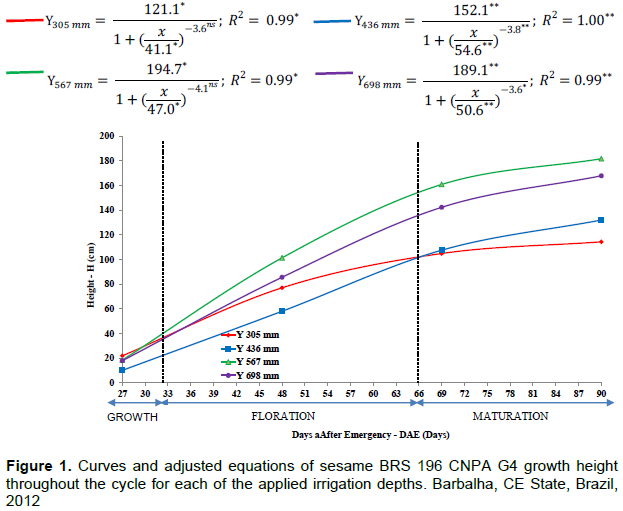 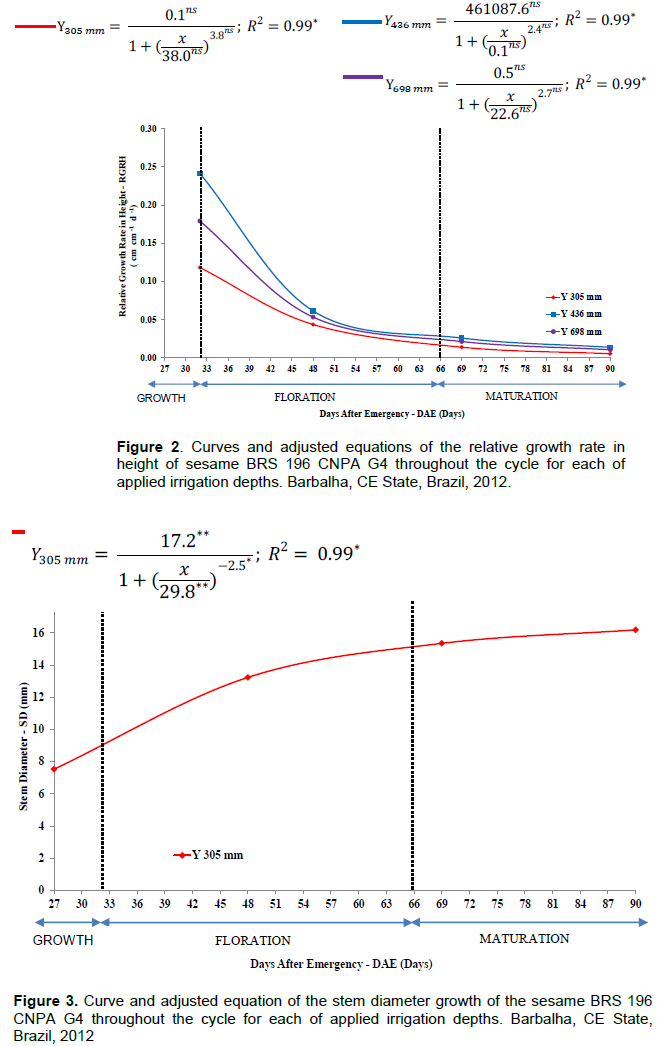 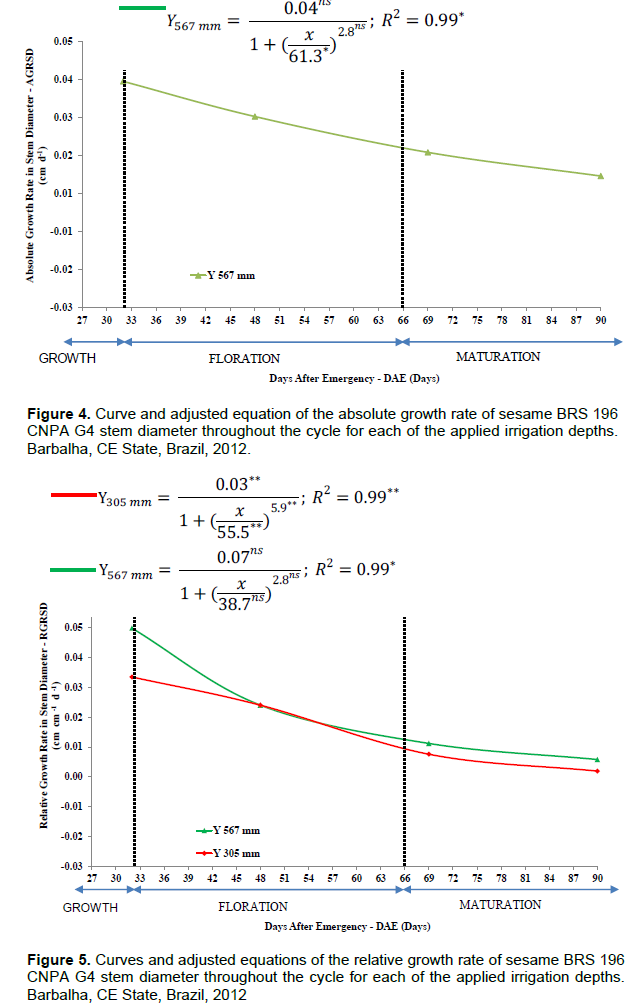 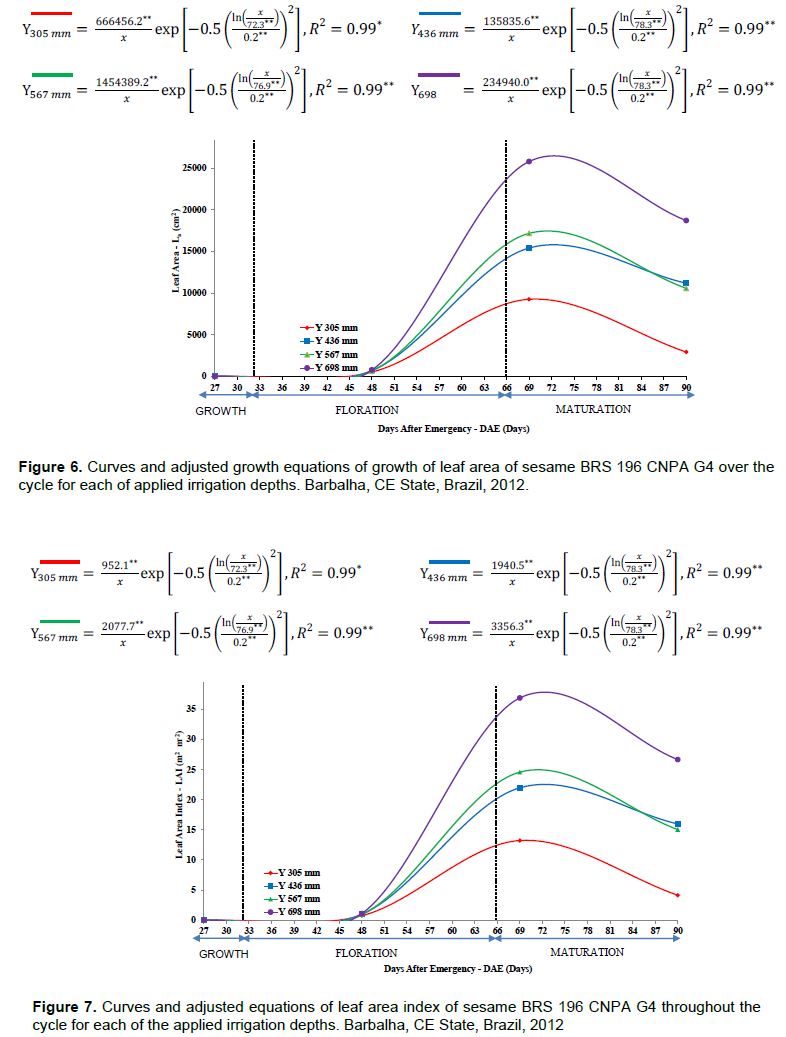 In the 567 mm depth, higher values were noted, over the cycle, for height followed by 698 mm (Figure 1), showing that the larger depths applied maximized the plant height, as observed by Viana et al. (2012). For Mesquita et al. (2013), with sesame BRS Seda, the depth 150% of ETc maximized the plant height.
Non-linear regression models used did not fit the data of the absolute growth rate in height (AGRH). The non-linear regression model sigmoidal-logistic did not fit, considering the applied depth of 567 mm, to the data of the relative growth rate in height (RGRH) of sesame. In almost all applied irrigation depths, the RGRH decreased over the sesame cycle, showing the lowest decrease between 69 and 90 DAE (maturation phase) (Figure 2).
According to Abdelgadir et al. (2009) and Rashid et al. (2010), sesame growth rate at floration is usually low, making it even smaller after that stage until physiological maturity when it virtually ceases. At sufficient level of water in the soil, in case of 698 and 436 mm of irrigation depths, vegetative growth was favored, while at 305 mm of irrigation depth, water stress condition, the plants probably has reduced its vegetative growth, as evidenced by lower RGRH throughout the cycle (Figure 2).
According to Taiz and Zeiger (2009), water deficits, even moderate, lead to preferential growth of the roots towards the moist soil layers, after which the stomata closes, when the assimilated are directed to the fruits. The non-linear regression model sigmoidal-logistic did not fit the growth data of the sesame stem diameter (SD), considering the depths 436, 567 and 698 mm (Figure 3).
The stem diameter (SD) increased significantly, only for the applied water depth of 305 mm, throughout the cycle to approximately 70 DAE (initial maturation stage), corroborating statements of Allen et al. (2006) that after the Floration stage, growth virtually ceases (Figure 3). The non-linear regression model sigmoidal-logistic did not fit, considering the depths of 305, 436, 698 and of 436 and 698 mm, to the absolute growth rates (AGRSD) and relative growth rates (RGRSD) in the stem diameter, respectively (Figures 4 and 5). In the depths adjusted to the non-linear regression model sigmoidal-logistic, the AGRSD and RGRSD (Figures 4 and 5) decreased during the crop cycle, less intensely between 69 and 90 DAE (Maturation phase). This was as also reported by Abdelgadir et al. (2009) and Rashid et al. (2010).
In water stress, case of 305 mm depth (Figure 5), plants, possibly due to stomata closure, had reduced vegetative growth, initially probably investing in the growth of roots to the wetter soil layers, and later, as a survival matter, in reproduction (floration) (Taiz and Zeiger, 2009), with minor RGRSD throughout the cycle. In the leaf area (La) and the leaf area index (LAI), intense increase in values was found for all applied water depths, over the cycle, from the floration stage to approximately 70 DAE, in the depth of 305 mm, or 75 DAE, in the remaining applied irrigation depths (Figures 6 and 7).
The results obtained (Figures 6 and 7) are similar to Severino et al. (2002), with sesame CNPA G4, and Grilo Junior and Azevedo (2013), with sesame BRS Seda. For Abdelgadir et al. (2009) and Rashid et al. (2010), the GRLA and the LAI, of sesame, which occur from the Floration to physiological maturity, is greater, and after that period it decreases sharply.
The evolution of the LAI (Figure 7) followed the pattern of annual plants, recommended by Allen et al. (2006), which is a slow initial phase followed by a rapid growth phase until another one with a sharp decrease after the physiological maturity, probably due, according to Benincasa (2003) and Grilo Junior and Azevedo (2013), to the senescence and the subsequent leaves fall.
An increase was noticed, from the floration, proportional to the irrigation in La and in the LAI with higher values in the depths of 698, 567, 436 and 305 mm, respectively (Figures 6 and 7). These results are similar to Kassab et al. (2005) in Egypt, with sesame Giza 32. The growth pattern was also found with corn (Meneghetti et al., 2008). It was also found that, in the smaller depth, the decreases in La and LAI started earlier, about 5 days before the other depths (Figures 6 and 7). This is probably due to water stress suffered by plants in that depth. According to Taiz and Zeiger (2009), if the plants suffer water stress after substantial development of leaf area, the leaves get old and fall.
None of the non-linear regression models used was fitted to the data of absolute and relative growth rates in leaf area (AGRLA and RGRLA). Finally, the applied irrigation depths did not alter the normal growth pattern in plant height, stem diameter and leaf area expected for sesame, but they differed from each other in plant height, RGRH, stem diameter, AGRSD, RGRSD and leaf area values throughout the sesame cycle (Figures 1 to 7).