Contribution of mechanization in rice production in Niger: Case of River Niger Area

The study was carried out in three villages in the Niger River region where thirty producing farmers per village were surveyed. These surveys concerned the field’s methods of acquisition, the tools used, the labor productivity and the cultivated area extent. The results obtained show that the most dominant mode of acquisition of the rice fields is through contract. In all the three villages, the areas cultivated with animal traction are 10 times larger than those cultivated manually during the first plowing and the second plowing (leveling) was carried out 100% by tillers. The productivity of plowing work is 8 h/ha with motorized tools against 1 days/ha in animal traction and 10 persons/days/ha manually. The tillers constitute the highest motorized tools used. They are 37 with an average of 1.23 ± 2.38/person for the farmers of Libore Bani Goungou against 35 with an average of 1.16 ± 2.25/person for those of Gueri Guinde Zarma and 34 with an average of 1.13 ± 2.19/person for the farmers of Saga Goungou. For animal-drawn plows, the highest number was observed in Saga Goungou where 45 were counted with an average of 1.2 ± 2.9/person against 41 with an average of 1.36 ± 4.94/person in Libore Bani Goungou and 40 with an average of 1.33 ± 4.82/person at Gueri Guinde Zarma. The efficiency of motorized hulling (125 Kg/h) is ten times higher than that of manual hulling.

Niger is a country with an agro-pastoral vocation. The country's economy is mainly based on agriculture and livestock which occupy more than 90% of the population (Warouma et al., 2013) and agriculture contributes 40% to the GDP (Ndiaye et al., 2013). Rice is the third cereal after millet and sorghum in terms of production and represents only 1.7% of the turnover of the agricultural production sector (Niger Rice Sector Strategy, 2009). For the intensification of irrigated crops, especially rice, efforts undertaken by Niger government and its development partners have made it possible to carry out 58 Hydro Agricultural Plannings for rice cultivation totaling 8 500 ha out of the 24 000 ha of cultivable plots (ONAHA, 2013). National rice production is estimated at 132 030 tones of paddy, of which 70 000 tones are produced on the Hydro Agricultural Plannings in the Niger  River Valley and 62 030 tones excluding Hydro Agricultural Plannings (AGRHYMET, 2006). However, this production only covers one third (1/3) of the annual national needs estimated at 266 710 tones of white rice (Sido, 2010). The workforce provided by human energy is insufficient to meet the challenge in Niger. Hence, there is necessity of mechanization. In sub-Saharan Africa, agricultural mechanization is still at the earliest stage of development (Rijk, 1989). Agricultural energy is supplied by humans (65%), animals (25%) and engines (10%) (Clarke and Bishop, 2002). Mechanization contributes to increase the areas developed, to reduce the hardship of agricultural activities, to improve the quality of production and processed products on the one hand, and to foster industrialization driven by agriculture on the other hand (FAO, 2008). Several studies around the world have demonstrated the role of technology on crop yields. For example, the use of steel plows for heavy soils significantly improved grassland yields in the United States in the 1840s (Gifford, 1993). In the Office zone of Niger (Mali), the use of tiller has made it possible to achieve rice production objectives of 6 t/ha against 3 to 4 t/ha without a tiller (FAO, 2002). The increase in yields induced by mechanization was noted by Saer et al. (2021). Nowadays, many localities in Niger do not even have animal traction. However, animal-drawn mechanization is the logical transition between manual and motorized cultivation (Bichat, 1984). It is very difficult to imagine the development of agriculture without equipment (Abdourahamane et al., 2020). The development of mechanization had begun to take shape with the realization of Hydro-agricultural Plannings and the creation of the national agency for that effect (ONAHA, 2013). No study was carried out on the impact of mechanization on rice production at the level of these Hydro-agricultural Plannings. That is why this study has targeted the mechanization of rice cropping with the main objective to examine the role of mechanization in this sector in Niger.

The present study was carried out in the villages of Saga Goungou, Libore Bani Goungou and Gueri Guinde Zarma, all located in Niamey IV municipality located between 13°24" and 13°35" North latitude and 2°00" and 2°15" East longitude. This area is bounded to the North by the municipality of Hamdalaye, to the south by the NY V municipality, to the East by the municipality of Libore and to the West by the NY II municipality. The annual rainfall varies between 400 to 600 mm and the average annual minimum and maximum temperatures are respectively 13 and 45°C (PDC, 2009). The material used during the field surveys is composed of the followings:

(i) Draft animals from farms;

(iii)  A GPS for determining geographic coordinates and field extent;

(v) A camera for taking pictures;

It consists of collecting quantitative and qualitative data for the conduct of this study, which was carried out in the following phases: literature review, equipment used, sampling, data collection and processing.

The selection of the villages took place in the presence of the Director of Saga Hydro-Agricultural Plannings Perimeter and the Head of the cooperative. The perimeter counts 1 622 farmers spread over 11 villages. Thus, after a draw, three villages were selected to conduct the study, namely Saga Goungou, Libore Bani Goungou and Gueri Guinde Zarma. The sampling of farmers was also carried out in a random fashion. The survey was carried out on 90 farmers with 30 farmers per village.

Conduct of the investigation

It took place from September 25th to October 10th, 2019. The first step was to collect data from the farmers trough meetings at the cooperative office, at the perimeter plots during their work and at their homes. The second step concerned the observations made on the farms.

Excel, Word and SPSS19 softwares were used for data processing, report writing, production of graphs, tables and statistical tests. The single-way ANOVA test was used to compare means between villages and the single-sample test was used to see if the mean of a variable was different from a specified constant. These analyzes focused on the following aspects:

(i) Characterization of the surveyed farms;

The investigation shows that no woman appears on the list of surveyed farmers.

Methods of acquisition of rice fields 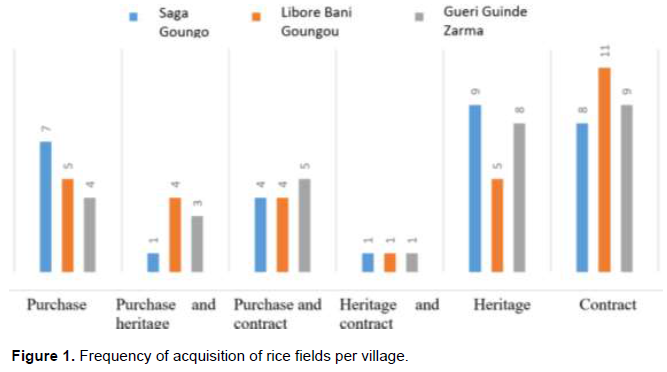 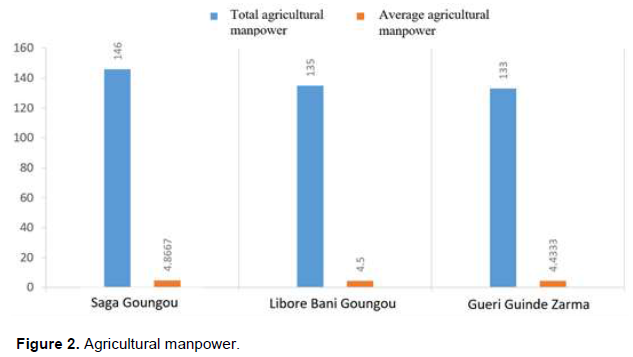 The total surface areas of the villages of Saga Goungou, Libore Bani Goungou and Gueri Guinde Zarma are respectively 13.75; 14.25 and 12 ha (Figure 3). Although it is in Saga Goungou that the number of agricultural manpower  is  higher,  the  area worked by the farmers of Libore Bani Goungou is higher than that of the other two. 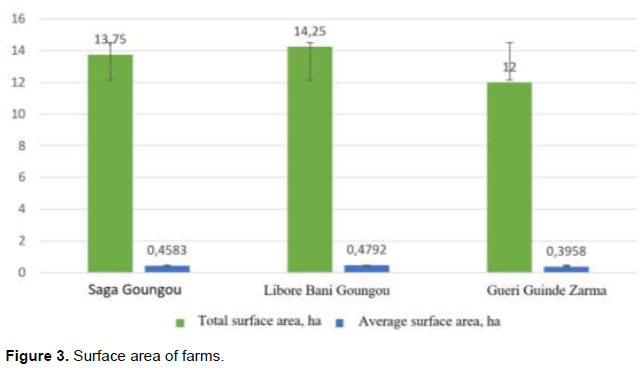 Work productivity and labor for the same energy source remain the same in the three villages (Table 2). On the other hand, the labor taking into account the different energy sources does not remain the same. Thus, the productivity of motorized, animal-drawn and manual plowing works are respectively 8 h/ha, 1 days/ha (12 h/ha) and 10 persons /days /ha, while the cost of labor per hectare is 32 000 FCFA for motorized plowing, 28 000 FCFA for animal-drawn plowing and 20 000 FCFA for manual plowing. 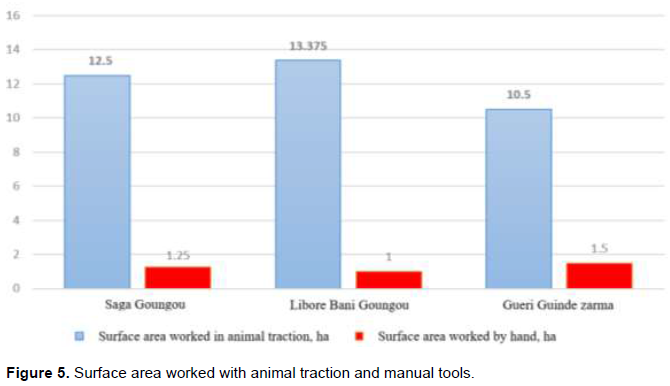 This study conducted in the Niger River Area aims to find ways and means to understand the role of mechanization in rice cultivation. The results of this study showed that no women are on the list of farmers. This is explained by the fact that women have limited access to land at the level of the Hydro Agricultural Facilities. These results confirmed those of Mahaman et al. (2015) according to which, in Niger, of the 23,107 farmers counted in the 33 irrigation schemes, there are only 615 women, or 3% of the total workforce. The methods of acquiring rice fields for the 90 respondents are diversified. Each farmer has at least one type of plot acquisition. Inheritance  and  contract  are  the  most  frequent with respective rates of 24.4 and 32.2%. These results do not comply with the data in the activity report of ONAHA (2013), which notified that, whatever the duration of the operating contract, it will not be able to create for the operator an alienable, divisible and transferable priority right. For motorized tools, the type of acquisition by rent is more dominant for the three villages. As for animal-drawn tools, the most dominant type of acquisition is purchase. These results confirm those of Saley (2020) where he reported that for all the coupling equipment listed, purchase is the most frequent mode of acquisition (53.18%). The total surface areas of rice farms in the villages of Saga Goungou, Libore Bani Goungou and Gueri Guinde Zarma are respectively 13.75; 14.25 and 12 ha. Although it is in Saga Goungou that the number of agricultural manpower is higher, the surface area worked by the farmers of Libore Bani Goungou is larger than that of the other two. This is explained by the fact that mechanization is used more  by   the   farmers  of  Libore  Bani  Goungou compared to the other two villages. These results agree with those of Bordet (1997), which reflected that, for farmers, mechanization responds to several challenges, such as producing more for the same work and/or increasing the cultivated areas. Studies by Mrema et al. (2008) had shown that initiatives aimed at improving productivity by promoting mechanization led to results below expectations, which is inconsistent with the results found. The average surface area worked in animal traction per village is 12.125 ha why that worked by hand is only 1.25 ha during the first plowing. This shows how well animal traction is adopted and mastered in this area. The productivity of the works remains the same at the level of the three villages for the same source of energy but varies according to the types of sources used. Thus, the productivity of motorized plowing works with the help of the tiller, with animal traction (1 pair of oxen) and manual are respectively 8 h/ha, 1 d/ha (12 h/ha) and 10 P/d/ha. This shows that even with the small  engine the work efficiency is higher  compared to the other two sources of energy and the quality of work is better. During the second plowing (leveling) all the work was carried out 100% by the intermediate motorization (tillers). It can be seen that despite the use of motorized and animal-drawn tools, manual tools continue to be used by the operators of these three villages. For motorized tools, the highest number was observed at the level of tillers. The largest number of these tillers was recorded in Libore Bani Goungou where it is 37 with an average of 1.23 ± 2.38 against 35 with an average of 1.16 ± 2.25 for Gueri Guinde Zarma and 34 with an average of 1.13 ± 2.19 for those of Saga Goungou. However, only two tractors were recorded at the level of all the farms surveyed in these three villages. This confirms the results of Faostat (2001) where he reported that less than 5%, and most often less than 1% of farms own tractors.

This study revealed the importance of mechanization in rice cultivation in the Niger River region, particularly in the villages of Saga Goungou, Libore Bani Goungou and Gueri Guinde Zarma. Through this research, it was notified that only the government agency (ONAHA) can contract the plot to farmers in this zone but in practice all types of acquisition of plots have been identified with the inheritance and contract being the most common. For the acquisition of animal drawn and motorized tools, purchase and rent are the most common. Animal traction is the most used source of energy during the first plowing, but farmers still continue to use hand tools because harvesting (cutting, threshing, winnowing) and transplanting are carried out exclusively manually. The intermediate engine is used by all farmers during the second plowing (leveling). In intermediate motorization, the plowing of a hectare is carried out in 8 h of time, in animal traction (a pair of oxen) it takes one day and manually it takes 10 persons to plow a hectare in one day. Mechanization increases the areas developed, reduces the hardship of agricultural activities and improves the quality of work by reducing labor and working time. However, this study only focused on the Niger River region. These results clearly show that mechanization improves agricultural production in this area.