Cat thyme (Teucrium marum), which is native to Spain and certain areas of southern Europe, is a medicinal plant that belongs to the mint family and is a close relative of Germander. This fragrant plant has been traditionally used by various herbalists and has thus been introduced in other regions and areas across the globe. In regions of southern Europe, cat thyme can grow anywhere from 3 to 4 ft tall; however, in areas such as England, the plant will rarely reach a foot in height. This plant can be grown in dry soil and have leaves covered with hairs, giving it shade to withstand hot arid summers. Although, it often dies in the wintertime, the plant can still be grown with proper care and conditions such as mats and various coverings. The leaves of cat thyme are oval and broader towards the base, and the flowers are pink and spiky on one side.
The flowers are hermaphrodite and self-fertile. Cat thyme has been found to have several astringent properties which facilitate its use as a stimulant for different medical conditions. The plant has foremost been used for homeopathic treatment, such as in treating people diagnosed of polyps. It has also been known to cure nerve diseases and its powdered leaves, either mixed in other ingredients or taken alone as snuff, has been recommended for conditions involving the head. This is mostly due to its compound, Assarabacca, and nowadays most lavender flowers are being substituted with cat thyme. Many herbalists have even used the plant to homeopathically treat small thread-worms in children. This wide medicinal use of T. marum is due to its rich complex of chemical composition and presence of different monoterpenes and essential oils. Due to the presence of these chemical substances, it provides defense mechanisms for plants from the injuries of parasitic and/or pathogenic organisms (Eisner, 2000).
Generally, some seeds including those of cat thyme have a physical or natural chemical inhibitor to germination (or dormancy), in these cases, the seed will only germinate in natural habitats when conditions are favorable. The inhibitor can be overcome by pre-treatment (such as boiling water treatment, abrasion, stratification, fire, smoke and leaching) of the seed before sowing. Once breaking of the seed dormancy is successful, the seed is subsequently activated by some hydrolytic enzymes, biosynthesis of RNA, DNA, protein, polysaccharides, and lipids which are essential for good growth of seedling. There are limited literatures regarding breaking of dormancy for effective seed germination of cat thyme (Delgado-Sánchez et al., 2011; Finch-Savage et al., 2006; Flores et al., 2008; Nadjafi et al., 2005; Willis et al., 2014). Therefore, the purpose of this study was to determine the seed dormancy characteristics of cat thyme, breaking of the seed dormancy (Bradbeer, 2013) with some artificial treatments and further evaluation of seed germination using Baggy method.

Cat thyme seeds were collected from senescent inflorescences from Beltsville Field (USDA-ARS, Beltsville, MD). Seeds were air dried and stored at room temperature until required for use. The experiments were carried out in the laboratory. The full grain seeds were selected to test germination capacity.
Walnut husk abrasion
First, 0.3% KMnO4 solution was used to disinfect the seeds (200 seeds) for 15 min, and washed thoroughly with water and dried at room temperature. Then, the cleaned seeds (approximately 100) were mechanically abraded using walnut husk. The abrasion treatments lasted for 50 s with low (500 rpm) grinding using regular mechanical grinder. The abrasion process was repeated for two more times after 5 min interval. Walnut husk was removed and abraded seeds were scanned under the microscope (40×) for either mechanical damage or breaking (Figure 1). One hundred intact seeds were stored in the freezer prior to germination experiment.
Hydrogen peroxide treatment
Abraded seeds (5 × 15) were further treated with 0, 2.5, 5, 10 and 15% concentration of hydrogen peroxide (Sigma-Aldrich, St. Louis, MO) for 72 h at room temperature (23 to 25°C). Simultaneously, seeds without abrasion (5 × 15) were also treated with hydrogen peroxide at four different concentrations.
Seed germination
Treated cat thyme seeds in ten variations, including control, were evaluated for seed germination in the climate controlled (23 to 25°C) small green house at Beltsville Agriculture Research Center. The seeds were planted in black plastic tray (6 × 20), using 36 cm3 potting soil (Premier Pro-Mix HP-CC Mycorrhizae, Quakertown, PA) in each cell. Five seeds per replicate were planted in a row. Seeded tray was watered every 48 h to avoid complete dry soil. Germination percentage (%) was measured by the number of normal germinated seeds versus the total number of tested seeds. In addition, rate of seed germination and time intervals with total of 30 days was recorded. The data in triplicate samples was analyzed.

The seeds of cat thyme often face underdevelopment due to the presence of very hard seed coats, thick testa, pericarps and other structures that cause a high degree of mechanical resistance to the non-dormant embryo, and even block water and oxygen intake into the seeds. This poor germination due to physical and chemical characteristics has been seen in several research studies and has proven the lack of permeability of the seed to water, gases and solutes (Bradbeer, 2013; Agboola et al., 2006; Kozlowski, 1971). To overcome these problems, walnut husk abrasion was used to further enhance the seed coat permeability and seed germination rate. Hydrogen peroxide treatment was used on viable seeds to increase seed uptake of water and other constituents which in turn may induce more germination. The method of abrasion showed 30% more seed germination (Figure 1). 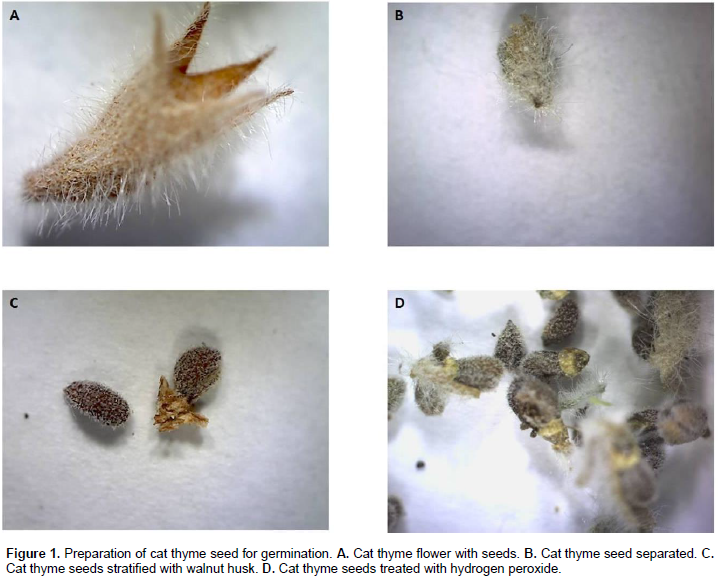 Ajiboye et al. (2009) investigated abrasion with emery cloth in the seed samples of four tree species which are: Tamarindus indica (L.), Parkia biglobossa (Jacq.), Albizia lebbeck (Benth) and Prosopis africana. The authors reported varied seed germination due to the treatment of emery cloth abrasion seed pretreatments. Several pretreatments were employed to soften, puncture and further split the hard seed coat in order to enhance the embryo for germination. Agboola (1995) also used emery cloth abrasion method to enhance seed germination of P. africana. Several peer reviewed publications reported the abrasion method induction in several crop seeds. Ren and Tao (2004) investigated different methods including abrasion, sulphuric acid treatment, boiling water, cold stratification and seed exudate treatments for the germination of ten Calligonum species seeds. The authors reported that the rate of germination of seeds in response to different pretreatments was similar for all ten Calligonum species. However, the percentage of germination of seeds of the ten species was lowest for exudate treatments and highest for abrasion treatments.
In addition, the abrasion, sulphuric acid and cold stratification treatments significantly enhanced overall germination rate. The treatment of cold stratification could break the dormancy of viable Calligonum seeds and thus initiate germination, but it has lethal effect on viable seeds like the boiling water treatments. Almost all germination parameters showed significant differences between the pre-sowing treatments for all ten Calligonum species. Shaik et al. (2008) investigated different treatments such as physical, mechanical and chemical pre-sowing in seeds of cancer bush (Sutherlandia frutescens L.) for germination response. The authors reported that soaking the intact seeds for 30 min in concentrated sulphuric acid (H2SO4) resulted in high germination percentage of 97.5% on the 14th day of culture. Similarly, seed dormancy was also completely broken by other method (mechanical scarification) in which 100% germination was obtained in day 2 of culture. The authors concluded that S. frutescens seeds possess exogenous dormancy due to the hard seed coat which is the main inhibitor of germination.
Clemens et al. (1977) studied the effect of a manual chipping treatment in addition to exposure of water at various temperatures for discrete time intervals on germination of seeds of five Acacia spp. The authors evaluated different parameters based on the percentage and rate of germination, and time duration for germination to commence. The authors found differences in response of the Acacia species to hot water treatments which was significant. Furthermore, increasing severity of treatments helped to improve germination rate and percentage germination up to a point where seed mortality became apparent. In addition, manual chipping of the seeds gave higher improvements in germination rate, and the seeds began to germinate faster than those given hot water treatment. However, in some species, germination percentages were lower in chipped seeds than in those treated with hot water.
Effect of hydrogen peroxide treatment on seed germination
Treatment of inorganic acids and peroxy acids in different concentration is another approach for efficient seed germination. Depending on the seed coat thickness and the type of the seed, different acids like sulfuric or nitric acids eliminate seed dormancy (Brandel, 2004; Baskin, 1998; Black and Bewley, 2000; Kapland, 1996). Exterior of the seed, including seed skin, shell and coating becomes porous when treated with acids, allowing penetration of water to dewatering process. There are several successful reports on improvement of germination of variety of seeds using different concentrations of sulfuric acids (Aliero, 2004; Sxitus et al., 2003; Rehman et al., 1999; Rana and Nuatiyal, 1989; Uzen and Aydin, 2004; Saberi and Shahrian, 2011). For Parkia biglobosa seeds, the authors concluded that infusing seeds in sulfuric acid (98%) for 3 min as compared to other treatments showed highest level of germination percentage (50%), while sulfuric acid 90% treatment for 3 and 5 min led to, respectively 28 and 0% germination (Aliero, 2004).
On breaking dormancy of Ulex europaeus seeds, which have hard crust, the authors concluded that sulfuric acid and sand paper treatments caused an increase in germination of the seeds (Sxitus et al., 2003; Leubner-Metzger, 2003). Rehman et al. (1999) investigated the seed dormancy of Acacia salicina which have hard crust, and reported that sulfuric acid increased (98%) seed germination and increase in time of connection with this acid solution resulted in more number of buds. They concluded that seed treatment with sulfuric acid for 10 min showed 98% breaking seed dormancy but seed infusion for 30 min in the mentioned acids showed significant germination increase. Rana and Nuatiyal (1989) also conducted similar experiment on the seeds of Acacia farniesiana; they observed that using sulfuric acid caused increase in germination, but with increase in time of seed connection with acid, there was injury to embryo structure, therefore producing more abnormal seedling. Uzen and Aydin (2004) reported that scratching of seeds showed significantly positive effect on breaking dormancy and germination stimulus of seeds of Medicago genus. Saberi and Shahrian (2011) investigated the effect of different treatments on breaking seed dormancy, germination stimulus and growth of Citrullus colocynthis seeds.
The treatments included sulfuric acid (98%) in 20 and 40 min intervals, potassium nitrate (0.2%) within 72 h, hot water at 90°C during 10 min and scratching by sand paper. To compare these treatments and normal germination, distilled water was used as control. The experiments were performed using a completely randomized design with four repetitions and six treatments. Results of variance analysis and mean comparison showed that there were significant statistical differences (0.01 levels) between treatments for percentage and velocity of germination, length of the root and shoot. The maximum percentage and velocity of germination and length of the shoot obtained in scratching by sand paper treatment and results of other treatments are in lower level. According to the results obtained, scratching is the most suitable method for dominance of seed dormancy of C. colocynthis species. The use of acid/alcohol treatments could be termed the chemical method of scarification to enhance germination in savanna tree seeds. This method was found to improve germination in both tropical and savanna tree seeds.