This study was designed to assess the potential use of Plectranthus barbatus Andrews, a plant growing locally in Kenya as a vegetable tanning agent. The aim was a deliberate attempt to adopt green chemistry and provide cheap locally available eco-friendly tanning materials. Anova statistical test (α<0.05) was used to compare the physical properties of leather tanned with three kinds of liquors made from the plant and the following mean values were recorded: Shrinkage temperature of 61.5 to 67.5°C; Grain crack range of 7.5 to 8.7 mm; Grain burst range of 7.9 to 9.1 mm; tear strength of 41.8 to 78.2 N with percentage (%) elongation of 68.4 to 75.9%; tensile strength of 17.6 to 40.8 N/mm2 with % elongation of 15.9 to 42.2% and thickness of 0.7 to 1.2 mm. The study concluded that P. barbatus Andrews leaves have adequate tannin content of hydrolysable type required for tanning. Furthermore, the brown colour of the leather produced is unlikely to undergo saddening as usually observed in Mimosa because of relative stability of hydrolysable tannins to light.

Conversion of hides and skins into leather involves modification and partial purification of collagen in the beamhouse followed by stabilization through introduction of tanning agents that cross-link its fibres to prevent decomposition and confer versatility. Although chrome tanning is popular in industrial production of leather, the residual chrome in tannery waste pollutes the environment with oxidation of chrome (iii) to carcinogenic chrome (vi) in leather articles (Graf, 2001).
Consequently, there is growing concern on human health and environmental risk posed by accumulation of severely high levels of toxic chrome in underground and surface water due to seepage and direct flow from tannery  effluent (Hossain and Bhuiyan, 2010). Vegetable tanning has been identified as an alternative to chrome (Covington, 2011) which has move towards green tanning chemistry and eco-labeling. However, vegetable tanning is not as widely used as chrome in Kenya due to the high cost of Mimosa, which is the only available vegetable tanning agent for commercial tanning. There is also limited knowledge and information about indigenous plants that may have potential use as vegetable tanning agents in Kenya.
Plectranthus barbatus Andrews belongs to the largest family Lamiaceae of the order Lamiales, which has herbs and shrubs with distinct four sided stems and blue raceme inflorescence (Mariya et al., 2013). The entire plant is aromatic with leaves and roots having different odours (Lukhoba et al., 2006). It is an indigenous plant growing in many parts of Kenya mainly used for herbal medicine and establishment of land demarcations. The plant was identified as a potential candidate for study due to its resistance to fire, a salient characteristic of plants that are rich in tannins (Katie et al., 2006). The tannin content of P. barbatus Andrews crude extracts were determined using the hide powder method which was found to be 20 and 8% in leaves and stems respectively (D. Obiero, University of Nairobi, Kenya, unpublished results).  Plants have since prehistoric times been utilized in organic tanning molecules and the pelt collagen react to form leather. The leather produced has improved physical characteristics performance for instance tear and tensile strength, shrinkage temperature, distension, flexing endurance, feel, handle and opacity (Covington, 2011). These alterations are thought to occur when polyhydroxyl groups in tannin molecules form bonds with the functional groups on the polypeptide chain especially –COOH (Covington, 2011). The proposed bonding in vegetable tanning is either through hydrogen bonds, ionic bonds or covalent bonds (Covington, 2011). Separately, Haslam (2007) contemplated of preferential binding in gap   region   of   the   quarter   stagger  structure  of  skin collagen. Figure 1 illustrates theoretical cross-linking of vegetable tannins with polypeptide chain. 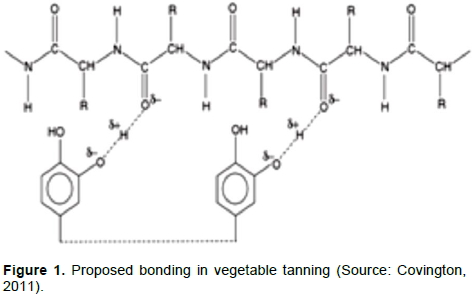 Generally, leather tests are divided into three main classes: physical/ mechanical tests of strength, moisture related tests and chemical analysis (Thorstensen, 1993). These properties have variations depending on the various factors but most importantly the type of tanning agent. In contemporary leather science shrinkage temperature has been used to measure tanning activity although, some studies argue that the shrinking and tanning reactions are independent (Covington, 2011).
Furthermore, in vegetable tanning, shrinkage tempe-rature is not of commercial importance (Thorstensen, 1993), rather the suitability and performance in intended use. For instance, pyrogallol tanning is coupled with deposition of a pale-colored sediment called 'bloom' (ellagic acid) which when deposited in the leather contributes to its colour and improves its solidarity, wearing properties and resistance to water (Covington, 2011). Leather by nature is an inconsistent material (Thorstensen, 1993) hence independent leather testing and analysis becomes important before use use (Sterlacci, 2010) especially when a new tanning material is proposed.

Duplicates of bated goat pelts were tanned in separate drums for each category of liquor prepared by dissolving ground dried leaves, stems and a mixture of leaves and stems of Plectranthus barbatus Andrews sourced from Nyamira County in Kenya. Control pair of pelts was tanned with Mimosa for purposes of comparison. All tannery chemicals and reagents were of recommended standards and high quality. Standardized equipment and machinery were used in the measurement of leather physical properties.
Ground P. barbatus Andrews leaves, stems combined with leaves, stems and Mimosa were dissolved in warm water in separate containers to yield 5% extracts before 150% floats of resultant liquors in  regards  to  the  weight  of  the  bated  pelts that were put into drums. The pairs of bated pelts were then immersed in the respective floats and drums run at an initial uniform speed of 8 rev/min for 6 h. Tanning progress was monitored by checking change of liquor colour and penetration through the pelt cross-section3% addition of the extracts was made carefully then run for 1 h before the pelts were left to stand overnight, completely immersed in the liquor.
Penetration of the extracts was inspected by cutting a small piece in the neck region of the pelt and colour uniformity through the pelt cross-section was used to establish completion of tanning. Additions of subsequent reduced percentages of extract concentrations were made and drums run until each tannage was complete and thereafter fixation was done with 1% formic acid. All the P. barbatus Andrews tanned leathers were further re-tanned in the same respective 5% extracts liquors after they had been horsed up for one day and later hang dried in the air for one day in order to improve colour, handle and weight. The dried leathers were then fatliquored with 4% vegetable oil followed by toggle drying.
Each processed leather sample was labeled, then sampling and measurement of the following physical parameters was done according to the official methods of International Union of Leather Technologists and Chemists Societies (IULTCS) (2001): Shrinkage temperature was measured on SATRA STD 114 (IUP/16), flexing endurance on Bally Flexometer Model 2184 (IUP/20), thickness (IUP/4), tear strength and tensile strength on Instron 1011(IUP/8; IUP/6) and distension test on Lastometer STD 104- SATRA test equipment (IUP/9). Data analysis was done using ANOVA statistical test (α<0.05).

This research work was funded by the National Commission for Science, Technology and Innovation (NACOSTI).