Reconstruction of metabolic pathways in selected bacterial and yeast strains for the production of bio-ethylene from crude glycerol: A mini review

The role of bioengineering in industrial processes cannot be ignored, especially in circumstances where the processes are uneconomical, demand high energy, use finite resources and emit huge amounts of carbon dioxide. Ethylene is a two-carbon unsaturated hydrocarbon that is industry's most important building block for polyester fibres, plastics, and ethylene glycol. For decades, ethylene production has relied on steam-cracking without many improvements, especially on issues of environmental impact and adoption of appropriate renewable approaches. This paper discusses selected microbial pathway modifications as novel approach to developing systems that could be alternatives to conventional ethylene production systems. Bioengineering of the ethylene pathway is suggested in view of the need to meet the criteria of high efficiency, increase sustainability and ensure product qualities and quantities that can exceed the existing approach.

Greenhouse gas emission associated with industrial activity is perceived as having the greatest single impact on climate change. Ethylene gas is an unsaturated hydrocarbon, which is used by industry as building block for the production of polyester fibres, plastics, and ethylene glycol production (Alshammari et al., 2016). For decades, ethylene has been produced by steam-cracking of natural gas and naphthalene, allowing huge carbon emissions into the atmosphere (estimated at over three tonnes of carbon dioxide per ton of ethylene) (Amghizar et al., 2017). Additionally, the steam-cracking route has regularly posed numerous other challenges, including non-selectiveness, high energy input and decreased economic perspectives (Haribal et al., 2018; Ren et al., 2006). For this reason, it is necessary to look into the adoption of eco-friendly methods such as conversion of alternative feedstock, including plant biomass, industrial waste and agricultural residues for improved techno-economic balance of ethylene production. It is worth mentioning that an abundance of renewable sources of feedstock also exist, such as crude glycerol, bioethanol, carbon dioxide, and lignocellulose, that can be tappe  (ACS, 2016).
This paper’s focus is on highlighting the importance of the biological sources of ethylene and placing emphasis on bioengineering as a potential approach to improve volumetric yields, reduce carbon dioxide emissions and decrease cost. Finally, it might present the opportunity of discovering biodiesel-derived crude glycerol as a relevant and abundant raw material that could potentially be used for bioengineered microbial systems in efforts to reduce production costs.

Ethylene synthesis is a naturally occurring process in higher plants and many microbial classes that belong to bacteria and fungi (Ballester et al., 2020). Ethylene occurs as a hormone that regulates growth and stress responses in plants and is understood to be a metabolic product of many fungi and bacteria that live with plants. A known number of biological pathways for ethylene biosynthesis exists, which exploit one of three distinct routes, depending on the host organism. In one pathway, ethylene can be produced via an intermediate molecule called 2-oxoglutarate, while in the other pathways, ethylene is produced from a precursor called methionine MET, as seen in Figure 1 (Fukuda et al., 1993).
For example, the biosynthesis of ethylene in higher plants from amino acid MET involves two key enzymes, including ACC (1-aminocyclopropane-1carboxylic acid) synthase and oxidase, in a series of sequences; MET → S-adenosylmethionine (SAM) → 1-aminocyclopropane-1 -carboxylic acid (ACC) → ethylene. The enzyme AdoMet synthetase initiates the catalytic conversion of MET to SAM with one ATP molecule expended per synthesis. In the next step, ACC synthase (ACS) catalyses the conversion of SAM to ACC and methylthioadenosin. While the methylthioadenosin is recycled to produce SAM through the Yang cycle, ACC oxidase degrades ACC into ethylene, CO2 and HCN. Most literature suggests that ethylene biosynthesis must be regulated at the level of ACC-oxidase, which also acts as a rate-limiting step (Van de Poel et al., 2011).
In several microbial species such as fungal and bacterial ethylene producers, ethylene is produced from methionine via 2-keto-4-methyl-thiobutyric acid (KMBA) or through an intermediate called 2-oxoglutarate by an ethylene-forming enzyme (efe) (Eckert et al., 2014; Ogawa et al., 1990). In the former pathway, KMBA is oxidized to ethylene gas by a complex reaction involving NADH (Figure 1). In the 2-oxoglutarate-dependent pathway, a key enzyme (efe) deoxygenates 2-oxoglutarate to produce one molecule of ethylene and three molecules of carbon dioxide. In the sub-reaction, both 2-oxoglutarate and L-arginine are mono-oxygenated to yield succinate plus carbon dioxide and  L-hydroxy arginine, respectively, the latter being further transformed to guanidine and L-δ-1-pyrroline-5-carboxylate (Pattyn et al., 2020). 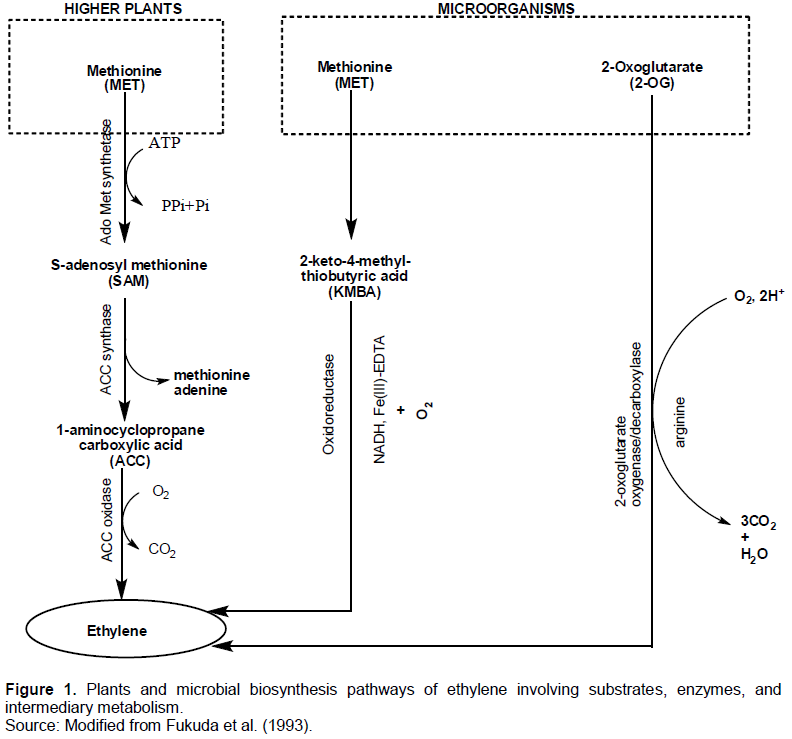 HETEROLOGOUS EXPRESSION SYSTEM STUDIES
Heterologous gene expression is one of the most promising technologies found to deliver higher protein yields. For example, heterologous gene expression of nitrile hydratase in Escherichia coli (E. coli) offers rapid growth, high yields and economic production of recombinant products (Chiyanzu et al., 2010). Over the past two decades, a large number of researchers have focused on the expression of genes that encode efe for ethylene biosynthesis. The first research involved a purified cell-free extract of Pseudomonas syringae pv. phaseolicola PK2 (Nagahama et al., 1991) being expressed in a range of host systems. The first increased ethylene in a heterologous system was reported in heterologous systems involving E. coli in JM109 and DH5α strains where a 73-fold higher yield than the wild type was found (Ishihara et al., 1991). Other heterologous systems reported thus far also include Saccharomyces cerevisiae (Nagahama et al. 1991), Pseudomonas putida (Ishihara, 1995), Trichoderma viride (Pirkov et al., 2008), Trichoderma reesei (Ishihara et al., 1996), tobacco (Tao et al., 2008), cyanobacteria (Chen et al., 2010), yeast (Araki et al., 2000) and Synechocystis sp. PCC68037 (Sakai et al., 1997).
Among all the heterologous systems for production of ethylene, the P. putida system incorporated with the pBBR1MCS2 vector has been the best, with 489 mg ethylene produced in 24 h, equivalent to a conversion rate of 21.7 mg ethylene g (-1) substrate (Hamilton et al., 1991). Despite all the benefits, heterologous gene expression can be time-consuming and costly. Recently, gene synthesis has emerged as a new application of genetic engineering and is quickly becoming a cornerstone of modern molecular biology (Guerrero et al., 2012). The technique offers an opportunity to design a construct of choice from the start, typically tailored for the final products. So far constructs have been designed in many ways, usually with the aim of disrupting a selected gene to prevent transcription of a functional protein (a knock-off) or by mutating the gene (a knock-in). A classic functional gene construct consists of a promoter region, gene-coding region and terminator region. In addition, a few gene constructs may contain special sequences including an enhancer, silencer, or reporter sequences, depending on the nature of the desired product.
Use of crude glycerol as a raw material in biosynthesis
Crude glycerol is one of the world’s most widely abundant waste products that can be further exploited as an alternative precursor for the production of ethylene. The first report on the possible conversion of glycerol to ethanol, and finally ethylene, was published in literature by Zhang and Yu (2013). However, the initial step involves fermentation of glycerol to ethanol and then the alcohol is dehydrated in the presence of a vapour phase of two-catalyst systems in support of phosphoric acid and activated alumina. The use of a two-step process is lengthy and expensive in terms of catalysts. In this review, crude glycerol is suggested for direct conversion to ethylene, as this approach would be more economically feasible. Usually, this type of approach will be sustainable for the management of crude glycerol in an environmentally friendly manner, especially for the biodiesel industry.
Bioengineering of microbial pathways towards bioethylene synthesis
A metabolic redirection strategy, which would involve re-routing of the central metabolism of a selected microorganism achieved via gene knock-out to block undesirable metabolic pathways, can effectively change the course of carbon flow of pyruvate from organic acids in the ethylene. Based on literature studies, the three genes contained in the ethylene-forming metabolic pathway with potential for manipulation include glycerol kinase (glpF) (a transporter of glycerol across the cytoplasmic membrane), the 2-oxoglutarate dehydrogenase multi-enzyme complex (responsible for 2-oxoglutarate formation from isocitrate), and the gene encoding an efe. A simple flow diagram of direct conversion of crude glycerol into ethylene is presented in Figure 2. The glycerol molecule is fed through a membrane with the help of glpF that is mutated (or has a knock-in gene). Thereafter, it enters the microorganism metabolic pathway. As mentioned before, the bioengineering of the 2-oxoglutarate dehydrogenase multi-enzyme complex and efe would increase the bioconversion of crude glycerol to ethylene.
The performance of such a system can depend on several factors, including the type of expression host, expression vector, substrate concentration, and process conditions optimum pH and temperature. However, further research would be needed to determine the stability and biological activity of such transformants and systems. Studies also need to be focused on making such systems cost-effective and feasible for integration into industry production. The metabolic engineering for ethylene production may have to ponder screening a broader range of microbial strains and vectors in order to reduce failures in the operations.

It is apparent that ethylene is one of the most important chemical precursors; it is mainly produced by steam-cracking of naphtha and natural gas. Microbial strains that utilise crude glycerol can be considered for metabolic manipulation as an alternative route for ethylene production of these strains; only impurity-tolerant ones will be economically viable for industrial application, since they will not require the purification step that adds to the cost of the process. To produce ethylene in volumes representative of or required by the industry will need both technical and economic innovations. First, screening and possible isolation of microbial strains that use crude glycerol as a sole carbon source will have to be identified. Second, accurate construction of expression vectors with designed gene inserts will limit making larger and more complex heterologous gene expression systems or constructs. However, the contaminants in crude glycerol may have an impact on the process. Previous results showed that impurities in the crude glycerol do significantly affect its bioconversion. Therefore, it is necessary to perform a rigorous screening step in the selection of strains that show tolerance to a high concentration of impurities. Overall, the use of crude glycerol in direct bioconversion of crude glycerol is an interesting opportunity, especially in view of the benefit that these microbial-based ethylene production processes can lead to localised production plants that can be set up at consumer locations without the risk and hazard associated with a large chemical-based industry.