OFFICIAL PUBLICATION OF THE SOCIETY FOR CELLULAR PATHOLOGY SCIENTISTS OF NIGERIA

Phytochemical and in vitro antioxidant studies on methanol extract of Vernonia calvoana leaf and its polar fractions: Preliminary study

This study aims to screen possible antioxidant potentials of methanol extract and polar fractions of Vernonia calvoana leaves and its phytochemical constituents since the leaves are used ethno medically in managing ailments like wounds, blood pressure, inflammation, arthritis, and bone diseases. Dried leaves (900 g) were ground and de-fatted with n-hexane. The dry marc was extracted using 80% methanol and water. Filtrate was concentrated using rotary evaporator at 40°C. Acute toxicity study and phytochemical analysis were performed with crude extract. Fractionation of crude extract using gradient concentrations of methanol and distilled water yielded 4 fractions - F1, F2, F3 and F4. Fractions with the crude were used for in vitro antioxidant studies. From the results, crude extract showed no signs of toxicity in mice at 2000 mg/kg orally. Phytochemical screening showed presence of alkaloids, flavonoids, tannins, phenols, steroids, saponins, terpenes, arthroquinones, carbohydrates and glycosides. The highest percentage antioxidant activity observed with crude extract was 72.37 at 500 µg/ml in DPPH spectrophotometric assay. DPPH results showed percentage antioxidant activity of 81.4% at 500 µg/ml of F1 and 67.73% at 500 µg/ml of F2. The FRAP values of the crude extract, F1, F2, F3 and F4 at 500 µg/ml were 1.957, 2.234, 1.731, 1.245 and 1.025 µM respectively. These results showed that the activities of methanol extract of leaves of V. calvoana may be dependent on the concentration of the extracting solvent. Vernonia species are known to contain abundant saponins and flavonoids which are polar compounds and readily soluble in methanol. This may explain the above observed antioxidant activities and thus, the use of the leaves in different traditional curative therapies in Southern Nigeria.

So many physiological defects, imbalances and disease states have been attributed to oxidative stress in living systems (Braca et al., 2002). Oxidative stress have  been shown to be caused by free radicals, including the superoxide radical, hydroxyl radical (OH•), hydrogen peroxide   (H2O2),   lipid   peroxide  radicals  and  reactive oxygen species (ROS) produced as a normal consequence of biochemical processes in the body due to increased exposure to xenobiotics (Igile et al., 2013). There is therefore need for novel antioxidants with better pharmacological potencies and medicinal plants readily provide sources for such novel drugs discovery (Fabricant and Farnsworths, 2001). The searches for plant-derived medication have accelerated in recent years as ethnopharmacologists, botanists, microbiologists, and natural products chemists are greatly involved in exploring the universe for phytochemicals and ‘‘leads’’ which could be developed for treatment of numerous diseases (Nwaehujor et al., 2013).

The Vernonia genus has about one thousand species and members of the genus are widely used as food and medicine. Vernonia calvoana belongs to the Asteraceae family and is commonly called “Ekeke leaf” and “Uchu nyin” by the indigenes of the central and northern senatorial districts of Cross-River State of Nigeria respectively (Igile et al., 2013; Egbung et al., 2016). In Nigeria, V. calvoana is domesticated and is used as fresh vegetable for preparing soup and yam porridge and other dishes that may not necessarily involve cooking. It is very different from the popularly known Vernovia amygdalina because of its sweet taste and is only popular in the Southern riverine area of Nigeria. It is used in traditional medicine as an antihelmintic, anti-protozoal and antidiabetic medication (Fabricant and Farnsworths, 2001). There is also a claim that it is used as an antidote forfood poisoning. It is also used for curing naval aches and constipation (Focho et al., 2009).

Since there is paucity of information on the chemical properties of this species, the present study was carried out to investigate the possible antioxidant properties of the plant leaves and fractions, and also ascertain its phytochemicals composition thereby justifying its medicinal and therapeutic significance.

Source of plant material and identification

The leaves of V. calvoana were freshly harvested from a farm in Calabar municipal, Cross River State, Nigeria in July, 2018 and were air-dried at room temperature. They were identified by Dr. Michael Ekpo of the Department of Botany, University of Calabar, Nigeria. A voucher specimen was deposited in the herbarium of the Department of Biochemistry, University of Calabar, Calabar, Cross River State.

Extraction and fractionation of crude extract

The dried leaves were finely ground using a laboratory mill. A 300 g of the ground material was first de-fatted with petroleum ether and then macerated in 80% aqueous methanol for 72 h. The filtrate was evaporated with a rotary evaporator at 40°C. The extract was loaded in a 3 cm x 50 cm column pre-loaded with silica gel 70-30 mesh, 60A (Sigma Aldrich, Germany) and pre-conditioned with methanol. The column was then successively eluted with 100% MeOH (F1), 70% MeOH (F2), 50% MeOH (F3) and 20% MeOH  (F4).

These were dried, weighed and used for further studies. Their purity was ascertained on TLC plates.

Thirty (30) matured albino mice of both sexes were weighed and randomly separated into 6 groups (1–6) of 5 mice per group. Groups 1–5 received orally varying doses (250, 500, 1000, and 2000 mg/kg) of the crude methanol leaf extract of V. calvoana respectively while Group 6 was given an equivalent volume of distilled water (0.03 ml/10 g). The mice were allowed access to feed and water ad libitum for 72 h and observed for signs of toxicity and death. Experimental animals were kept in accordance with the guidelines for animal care as contained in the Animal Ethics Handbook of the Faculty of Basic Medical Sciences, University of Calabar, Nigeria.

The crude extract was used for phytochemical analysis as described by Trease and Evans (1984). Two (2) g of the crude extract was weighed and dissolved with 20 mL of distilled. The solution was screened for the presence of alkaloids, flavonoids, tannins, polyuronoids, saponins, terpenes, arthroquinones, carbohydrates and glycosides using standard methods.

The free radical scavenging activity of extracts was analyzed by the DPPH assay following a standard method (Mensor et al., 2001). A given volume (2 mL) of the extract and fractions at varying concentrations ranging from 10-500 µg/mL each was mixed with 1 ml of 0.5 mM DPPH (in methanol) in a cuvette. The absorbance at 517 nm was taken after 30 min of incubation in the dark at room temperature. The experiment was done in triplicate and the percentage antioxidant activity was calculated as follows:

The total antioxidant potential of sample was determined using the ferric reducing ability of plasma (FRAP) assay of Benzie and Strain (1999) as a measure of “antioxidant power”. FRAP assay measures the change in absorbance at 593 nm owing to the formation of a blue colored FeII-tripyridyltriazine compound from colorless oxidized FeIII form by the action of electron donating antioxidants. Standard curve was prepared using different concentrations (100-1000 µmol/L) of FeSO4 x 7H2O. All solutions were used on the day of preparation. In the FRAP assay, the antioxidant efficiency of the extracts under the test was calculated with reference to the reaction signal given by an Fe2+ solution of known concentration, this representing a one-electron exchange reaction. Ascorbic acid was measured within 1 h after preparation. The sample to be analyzed was  first   adequately  diluted  to  fit  within  the  linearity  range.  All determinations were performed in triplicate.

Calculations were made by a calibration curve

All data were expressed as Mean ± S.E.M. or percent mean. Data were analyzed using one-way analysis of variance (ANOVA) at 5% level of significance.

No mortality or adverse reaction was detected in mice during the 72 h observation period following oral administration of the crude extract up to a dose of 2000 mg/kg.

The result showed that the crude, F1 and F2 had better percentage activities at high concentrations when compared with ascorbic acid. The methanol crude extract showed 72.37% activity at 500 µg/mL while F1 gave 81.40% at the same concentration compared to 82.37% given by ascorbic acid (Table 2 and Figure 1). F4 on the other hand showed activities significantly different from ascorbic acid even at high doses of 500 µg/mL (22.17%).

The phytochemical analysis of the crude methanol extract of V. calvoana showed the presence of high levels of alkaloids arthroquinones carbohydrates and glycosides, very high levels of flavonoids phenols saponins and a low level of tannins, steroids and terpenes (Table 1). Similar results were also seen in methanolic leaf extract of Costus afer which showed anti hyperglycemic effect as well as antioxidant effect in in vitro and in vivo studies (Anaga et al., 2004). Oxidative damage at cellular level denatures proteins affecting their functions as biological catalysts and signaling components, carbohydrates by changing their structural conformation and lipids via lipid peroxidation and these changes contribute to changes contribute to cancer, atherosclerosis, cardiovascular diseases, ageing and inflammatory diseases (Braca et al., 2002). Cell membranes are made up of mostly lipids which are initial targets for invading micro-organisms and chemical agents, radiation and are often destroyed when attacked (Maxwell, 1995). This causes spontaneous proliferation in the  cells  and  animal  as  a  whole.  Thus, there is need for balance and regulation of these radicals using antioxidants (Braca et al., 2002). Antioxidants are known to be intermediates between chemical reactions and biological activities. They do not completely get rid of free radicals in the body but retard or minimize the damage caused and also block processes of oxidation by neutralizing free radicals thereby becoming oxidized themselves (Nwaehujor et al., 2013). Endogenous antioxidants prevent oxidation by reducing the rate of chain initiation. These may be responsible for results observed in the acute toxicity study. 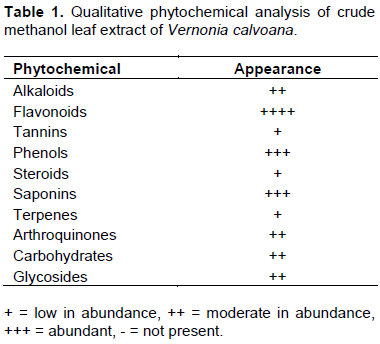 The results of the antioxidant assays (DPPH and FRAP) showed that the methanolic leaf extract of V. calvoana has antioxidant properties (Table 2 and Figure 1 respectively). It was able to scavenge the free radicals produced by DPPH also reduce ferric oxide appreciably. The DPPH and FRAP assays treat the antioxidants contained in the sample as reductant in a redox-linked colorimetric reaction and the value  reflects  the  reducing power of the antioxidants. The procedure is relatively simple and easy to standardize. Thus, it has been used frequently in the assessment of antioxidant activity of various fruits, vegetables, and some biological samples (Hajimahmoodi et al., 2008). Antioxidants consist of vitamins, polyphenols, flavonoids, minerals and endogenous enzymes such as superoxide dismutase, catalase and glutathione peroxidase that have the capability to neutralize unstable molecules (Touillas et al., 2003). Such antioxidant effect has been identified in Bridelia micrantha where the percentage antioxidant activity of the methanolic extract increased considerably up to 100 μg/mL concentration where it produced its optimum effect (Adika et al., 2012). 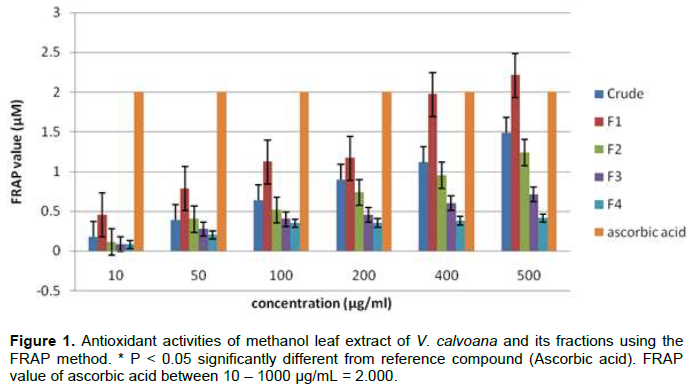 There have been several works for potential antioxidant compounds which will replace the suspected cancer-causing synthetic analogues like butylated hydroxytoluene (BHT) (Ito et al., 1985). These compounds may be another  avenue   for  novel  antioxidants  since  very  few works have been done on this species of Vernonia and again be useful especially to those in rural areas. Flavonoids are valuable dietary supplement partly because they have high antioxidant potentials (Igile et al., 1994).

These evidences show that the activities of methanol extract of the leaf of V. calvoana may be dependent on the concentration of the extracting solvent. Vernonia species are known to contain abundant saponins and flavonoids which are polar compounds and readily soluble in methanol. Most flavonoids and their derivatives from plant origin are known to possess great antioxidant potentials. This may explain the above observed antioxidant activities and thus, the use of the leaves in different traditional curative therapies in Southern Nigeria.