Improper disposal and burning of agricultural residues are commonly practiced in some developing countries in which harmful gaseous products released into the atmosphere and some are depleted and reacted with the soil causing environmental pollution. Renewable technology can therefore be introduced for the utilization of the residues and ensure proper storage medium of the residues. An investigation was carried out on the pollution potential of oil palm residues on surface and underground water resources at the processing centre. Oil palm residues and water samples from the stream and well located near the oil processing site were used for the experiment. Water samples were collected during the raining and dry season to determine the level of pollution caused by the residues. Physical, chemical and bacteriological parameters of the water samples were determined. The chemical compounds of the palm residues were investigated. Results showed that aromatics compounds are mainly dominant of the palm fruit fiber which was characterized for bio-fuel production. It is revealed that effect of pollution on water bodies is significant at p<0.05. Hence, results showed that some parameters like colour, total solids, pH, amine contents, Escherichia coli exceeded World Health Organization (WHO) levels for drinking water. The amine content with (0.35 mg/L) of the samples was higher than the level recommended (0.1 mg/L) for drinking. For colour, the least value of 15.5 mg/l of the total samples was higher than the recommended value (15.0 mg/L). Also, the values of E. coli which ranged between 0.03-0.15 were far above zero count/100ml of World Health Organization (WHO) maximum permissible level for drinking water. Therefore, oil palm waste should be properly disposed and ensure improved storage of the residues for further processing. Conversion of the residues to useful products through renewable technology will alleviate environmental pollution. 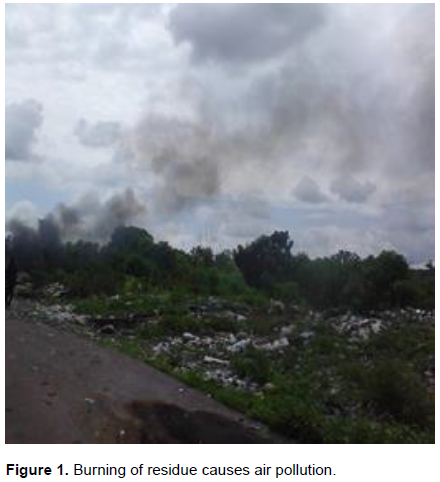 Renewable technology
Renewable technology is defined as the technology available for the conversion of cellulose in agricultural residues into fuel and chemical feedstock. The possible technologies include incineration, combustion in controlled atmosphere, hydro carbonization, anaerobic digestion and pyrolysis (Ren et al., 2013; Faisal et al., 2007; Bello et al., 2009). Of these renewable technologies, pyrolysis offers the most visible root for the generation of fuel and chemical feedstock. This process implies decomposition of cellulose by heating in the absence of oxygen to produce gases, liquid and char; which has been the source of many basic organic chemicals such as acetone and methanol (Faisal et al., 2007). Pyrolytic products can be used as fuels, with or without prior upgrading, or they can be utilized as feedstock for chemical or material industries.
Pyrolysis is a process of the thermo-chemical conversion of biomass to char, bio-oil and gas, in the absence of oxygen and other reactants (Balat et al., 2009). It is a non-equilibrium process where the biomass undergoes multistage decomposition resulting in large changes in specific volume. In this conversion process, combustion and gasification occur where complete or partial oxidation is allowed to proceed. The reaction rate, order and product yields depend on parameters such as temperature, heating rate, pre-treatment, catalytic effects, particle size etc (Bridgewater and Peacookie, 2000)  and  these parameters influence the optimum value in a fast pyrolysis process (Faisal et al.,  2018).  Also, Tsai et al. (2006)  reported that fast pyrolysis is the most suitable process route to maximize the yield of liquid product. It is on this note that the paper emphasizes the importance of pyrolysis on the extract lignocellulosic content of two agricultural residues to simultaneously respond to bioenergy and chemical production.
The root cause of energy situation is that in the recent years, while there has been no limit on growth in energy demand, the production of energy from the existing sources has come under increasing mounting pressure. It seems probably therefore, that the shortage of fuel (energy) supplies is an actual fact of life and the fossil fuel supplies in our planet may not last forever (Bello et al., 2009). There is energy crisis in our hand, henceforth source of energy supply is far below energy consumption. There is environmental pollution on the release of green gas house emission from fossil fuel burning which is causing health hazard. This has led to an increase in research on development of renewable energy and technology which plays vital roles for future energy and chemical supply. However, there are various renewable energy sources which could reduce the demand on fossils fuels. The renewable technology saves time and it is usually more environmentally friendly, especially on air emissions (Schroeder, 2009). There is great potential in the utilization of renewable biomass for energy and chemicals production to develop human life prosperity to address the crisis of energy security and sustainable economics in the world (Schroeder, 2009; Ren et al., 2013).
Agricultural materials can be converted to liquid by thermal, biological and physical methods. Thermal conversion methods used are combustion, gasification, liquefaction, pyrolysis and carbonization. Pyrolysis is the most popular technique of biomass because it can produce liquid yield up to 75% wt on a dry-feed (Guillain et al., 2009; Bridgwater, 2006).

This section describes the sample preparation, renewable technology and proximate analysis of the residue. The palm fruit fiber is a waste product of palm kernel fruits and after oil processing. The samples were collected from rural area (Iranyin village) near Ogbomoso town (8°07’ N, 4°16’E), South western, Nigeria. The samples used for the study were sun dried and ground into fine particle size. The samples were then screened to give various fractions using different wire mesh sizes. The diameter of the particle size of palm fruit fiber used ranged from 0.250 to 0.550 mm in form of 0.250, 300, 0.425 and 0.550 mm. Each sample was mixed with Sodium Anhydrous in order to make it dried and remove totally the moisture in it. Extraction of oil from the samples (residues) and characterization of bio-oil were carried out at the laboratory of the Department of Chemistry, University of Nairobi, Kenya.
Also, the water samples were collected from surface and underground source near the oil processing centre. The water samples used were collected from the point of discharge, 1 m distance away from discharge centre and from a nearby stream and well. 2 litres of each sample were collected with clean plastic bottles. The samples were taken twice during the raining season between August and September 2017 and dry season in December (2017). The experiment was replicated and the average values were recorded. The samples were analyzed for physical properties such as colour, turbidity, odour, taste, total solid, dissolve solid and suspended solid. The chemical examination of water is performed to detect the quantity of chemical substances in water which could affect its portability. Such chemical properties carried out were Ammonia, Carbodioxide and Calcium, Copper, Chlorine, Lead, Iron, Manganese, Nitrate, Sulphate, pH, phenolphthalein, Alkalinity, Melthy Orange and total hardness. Bacteriological Tests (temperature, cyaninde, bacteria count) were carried out immediately on the sample collected on getting to the laboratory.
Characterization of bio-oil
The bio oil obtained from lignocellulose of palm fiber was used for characterization. Litmus papers blue and red were used to check its acidity and alkalinity.  A microprocessor pH meter (HANNA pH 211) was used to measure the pH of the oil. Analysis was done at room temperature; the meter was calibrated by measuring pH of buffer solution to be 7.03 at 23.6°C. The density of oil was conducted at room temperature of 23.6°C. The density is defined as sample mass divided by a fixed empty volume of pycnometer. Then a 2 ml pycnometer was used to determine the density; the bio-oil was filled into the flask and weighed the mass. Viscosity of bio-oil was measured using Ostwald Viscometer (a U shape glass viscometer). All experiments were carried out three times and average readings were recorded.
A separate constituent of the pyrolysis mixture together with helium carrier gas goes to the flame ionization detector. It was at this zone that the separated organic compounds ionized at a high temperature in contact with hydrogen or air flame. A polarized electric grid captures the resultant ions which generate a current that will be recorded as a chromatogram. Peak areas of individual gases were measured and the abundance was determined from the prepared calibration. The calibration which is an external standardization has a technique involving essentially, the injection of known amounts of pure compounds as reference substance at the same conditions with that of the sample (pyrolytic products). The sample peak was compared with that of the standard. Also, individual compound was identified by matching their elution times along the base line with that of the standard. So, different components in the liquid solvent and their retention time are displayed on the screen of the GC-MS monitor.

This study explores the potential of renewable energy as remedy to environmental hazard. The research explores the nexus between climate change impacts, energy and pollution potentials of agricultural residues on the environment. The renewable technology of palm fruit fiber was experimented and hence examined the current and potential adverse effects of residue burning on climate change. It is observed and concluded from the results that the pollution potential of the palm oil processing site located near water source at Iranyin village is high which affects the water potability.
In this framework, climate stewardship becomes a partnership between the public, higher educationist and the government. To implement the findings, it is important that strong enforcements of environmental protection laws are needed to ensure the stoppage of palm residues burning and discharge of effluent improper. Finally, this study encourages the practice of renewable technology to alleviate the emission of greenhouse gas and global warming, hence the use of bio-energy will enhance Nigeria’s economy diversification, reduce dependence on crude oil and create a strong synergy between the agriculture and energy sectors.

The authors appreciate the financial support of the Department of International Development (DfID) and ACU, United Kingdom and the African Academy of Sciences AAS, Kenya. The experiment was done at Institute of Climate Change and Adaptation, Nairobi, Kenya while the field work was carried out in the South western part of Nigeria.