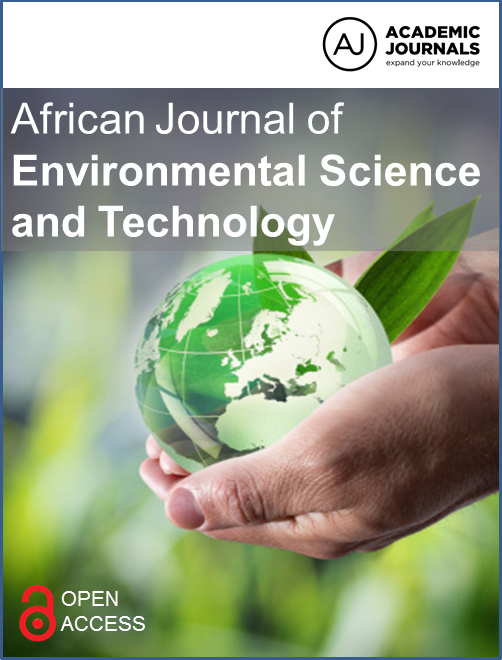 The issue of water scarcity in many parts of the world, especially in arid and semi-arid regions, is a major dilemma. The amount of moisture for plants is not comparable to rain, but in arid areas, it is a huge contribution to plant water supply. In this research, the effect of using Peltier to improve soil condensation by performing several tests was studied in order to investigate the possibility of increasing soil capacity and reducing surface evaporation. Due to the Peltier cooling effect, with copper, iron and aluminium plates, results were evaluated in normal water, saline water and soil texture. The results showed that by using the copper plates in Peltier module, temperature dropped and it was 10% more than iron and aluminium one. It showed that there were significant differences in the results.

Water combat is expressed as one of the major challenges in agricultural water management. Water is becoming a crucial factor for crop production all over the world (Bijani and Hayati, 2011). Due to climate change, water at low temperature is necessity since the means of cooling the water is not readily available to all sections of the society (Hammad et al., 2017).

It is not shortage or lack of water that leads to conflict (Yoffe et al., 2003), but how water is governed and managed. To regulate water use and enable sustainable and equitable management in areas stricken with water shortages, stronger policies need to be put in place. Yet water management institutions, especially in developing countries, often lack the human, technical and financial resources to develop and implement comprehensive management plans that can properly accomplish the installation of sufficient governing mechanisms.

Iran is located in arid and semi-arid zone and over 90% of available water use for agricultural purposes and faces shortages of water make the statement complete to make sense (Ardekanian, 2003; Khoshbakht, 2011).

A system worked through Peltier Effect as water cooling has many advantages included slight range, handy, mute, natural peaceful and cost-effective in comparison with ordinary systems. This study was about the thermic work of a handy thermo-electric water cooling system. During this research, the adapted voltage on TE switched to figure out its reaction on thermal act. Just after increasing voltage, the hot side temperature increases, while on the opposing side of the cold side. Increasing the heat absorbed by the cold side besides the heat rejected from the hot side. Antecedent water temperature has a serious effect on the performance of TE water cooling system. The coefficient of performance was 0.14 when using initial water temperature of 15°C, while it increased and reached 0.5 when the original water temperature increases to 30°C. This happened as a result of the decrease in temperature gradient between

Since the development of the theory of Philip and de Vries (PdV model) around 60 years ago, basically all models of evaporation and condensation in unsaturated soils have assumed that soil water vapor at all depth into the soil is in equilibrium with the liquid soil water (or soil moisture) at the same depth. In essence, this local equilibrium assumption means that whenever the soil moisture changes phase, it does so instantaneously. This assumption is quite proper for its original application, which was to describe the coupled heat and moisture transport in soils (and soil evaporation in particular) under environmental forcing associated with the daily and seasonal variations in radiation, temperature, precipitation, etc. (Maulbetsch, 2003).

Peltier effect is the cooling effect that occurs when a small current passes through the junction of two dissimilar wires. This effect forms the basis for thermoelectric refrigeration and is named in honor of Jean Charles Athanase Peltier, who discovered this phenomenon in 1834 (Çengel and Boles, 2006).

The Peltier effect occurs whenever electrical current flows through two dissimilar conductors; depending on the direction of current flow, the junction of the two conductors will either absorb or release heat. In the world of thermoelectric technology, semiconductors (usually Bismuth Telluride) are the material of choice for producing the Peltier effect because they can be more easily optimized for pumping heat (Thermoelectric cooling FAQ, Tellurex Corporation). In this study, in order to improve the cooling capacity and soil condensation, the possibility of using Peltier was examined as a condenser.

In recent years, devices based on the Peltier effect, which is the basis for solid-state thermoelectric cooling, have evolved rapidly to meet the fast-growing industry of electronics. The main point arises from the fact that the heat extraction or absorption occurs at the contact between two different conducting media when a direct current (DC) electric current flows through this contact. A comprehensive study of the mechanisms of heating and cooling originated by an electrical current in semiconductor devices; the Peltier effect depends strongly on the junction surface thermal conductivity. The contribution of this effect to the total effect of thermoelectric cooling increases with an increase in surface thermal conductivity and it slackens with a decrease in surface thermal conductivity (Gurevich and Velázquez-Pérez, 2014).

The Peltier system consists of a semiconductor string. The ceramic outer sheaths are metallized to transmit both heat and electric (Figure 1). 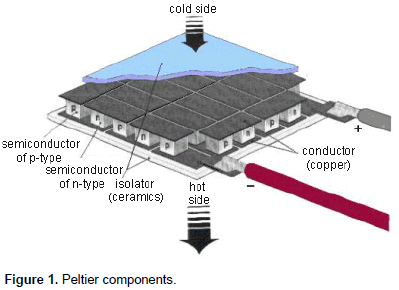 The Peltier’s effect applied in the structure of cooling systems based on thermoelectric, where the cooled connection was located to be cooled and the heated connection was located away. The cold point absorbs the heat from the space to be cooled and then the heat is dropped through the hot point. The system in this way drained heat from the cold medium to the hot medium through electric electrons instead of the working fluid in the vapor squeezing refrigeration systems (Pearse, 2008).

Esfahani et al. (2011) made a movable system (solar still). The research was carried out in nine summers and winter days in Iran. The air temperature and the solar radiation magnitude in the summer is greater than the winter in Iran, hence, the results had a significant difference. The experiment result showed that the solar radiation magnitude affects the productivity of handy solar still.

The study was conducted in Tehran province, in the Soil Conservation and Watershed Management Research Institute. The present study was carried out in salty (EC= 38 ppt) and normal water then in the soil. The experiment carried out in water was categorized based on water salinity. In this study, Peltier (Figure 2) with heat sink and copper iron and aluminium plates were used in water and salt water (7.5 L) applied. The hot temperature was cooled down by a computer fan (Figure 3).

The heat sink was made of 7 plates that were joined to another horizontal plate, the Peltier module stick on the top of the horizontal one. The plates were connected vertically to the heatsink to enter water and soil, and this lead to an increase in the efficiency of the element (Figures 4 and 5). Heat sink element was connected to the cooling unit. The shape and size of the heatsink have a huge impact on the performance.

In order to study the condensation efficiency and soil moisture content in three selected condensers includes iron, copper, and aluminium plates; experiments were performed in drinking water, saline water and then soil (Figure 6). 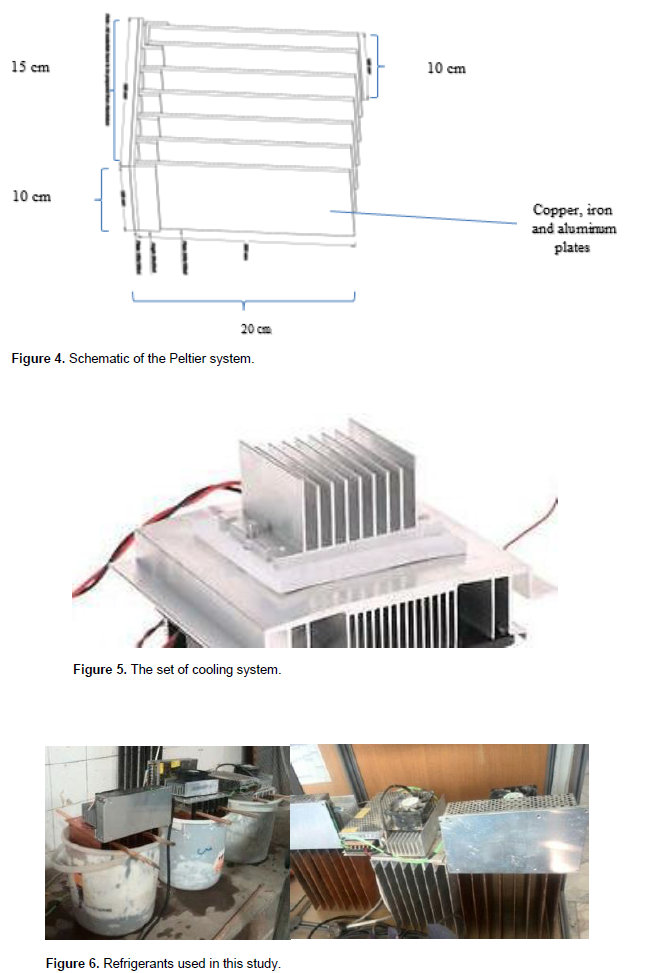 Experimental data were recorded each in 30 min, 8 h a day in a week. Water and soil temperature were measured. The energy production and losses were registered. Adjustment was made on the methodology because as it is, the experiment cannot be reproduced.

In order to gather results, at the beginning, the experiment was run in saline and drinking water then in the soil. The reduction in temperature was registered in the early hours, and became steady at the end of the process. The steady trend of the diagrams was due to the heat exchange stability. Output energy balanced by the energy produced, which if insulated, had a downward trend. Minimum temperatures were recorded and they vary due to different environmental temperatures.

According to Figure 8, water temperature in both drinking and saline water dropped and past tense tangent was used after 200 min.

According to Figure 10, the temperature drop in the copper plate is higher than iron and aluminium condensers. The rate of temperature reduction in salinity water with all plates was higher than water. According to Table 1, during the 4 days of experiment, the highest amount of energy in saline water was 195.4 and 12.66 watts in copper plate. The lowest amount of energy loss in drinking water was 498.48 watts, and in salinity water it was 524.6 watts in copper one. (Figure 11 and 12)

The soil temperature changes were evaluated using copper, aluminium and iron plates and the results are as shown in Figure 13. Table 2 shows the equations that indicate the temperature variation of the soil. 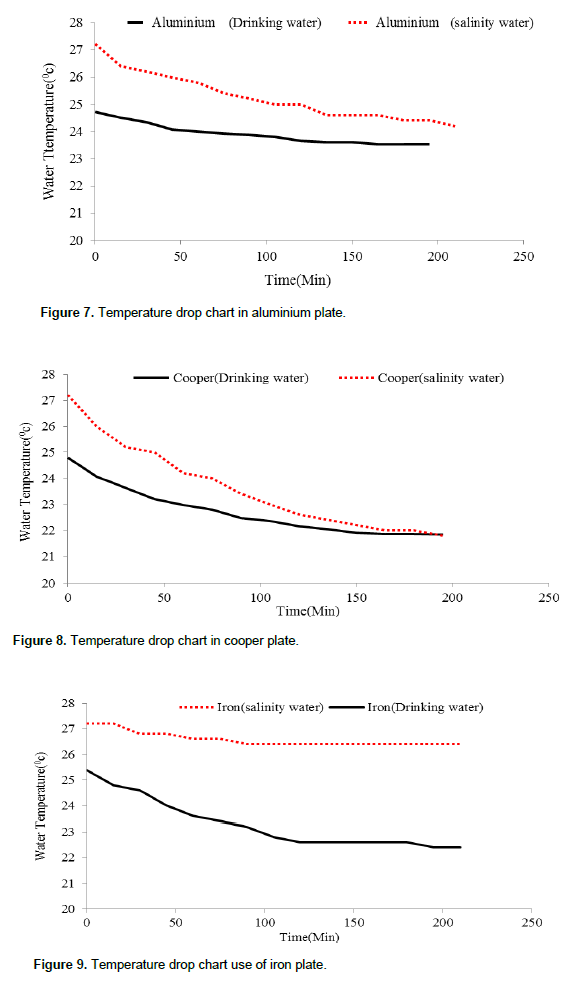 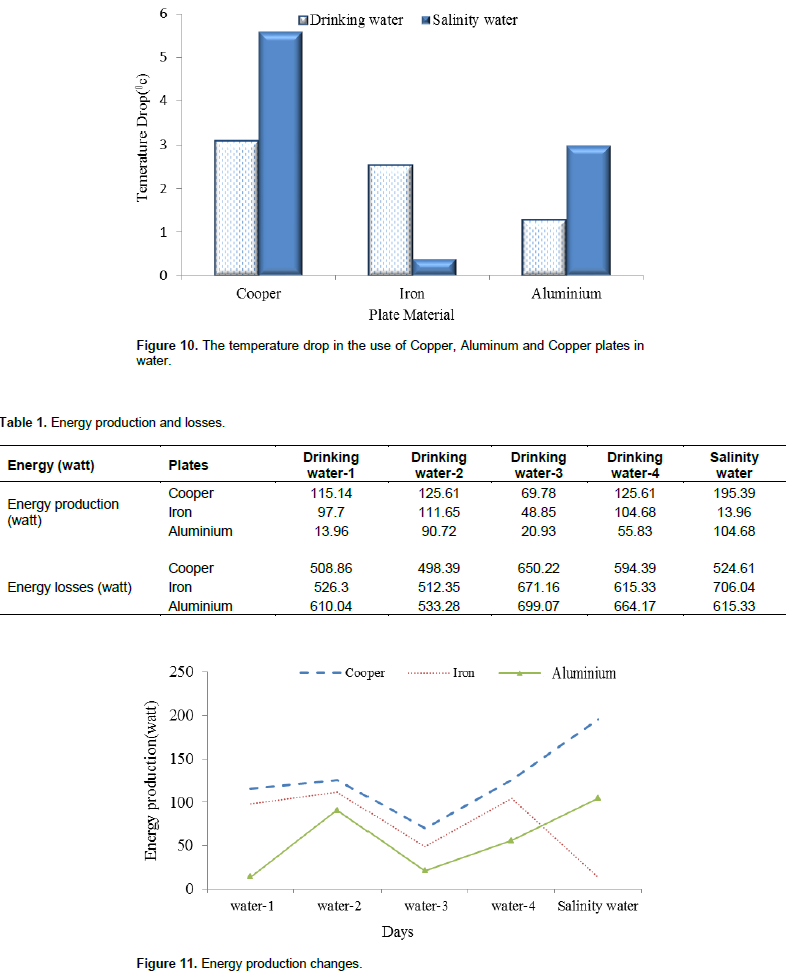 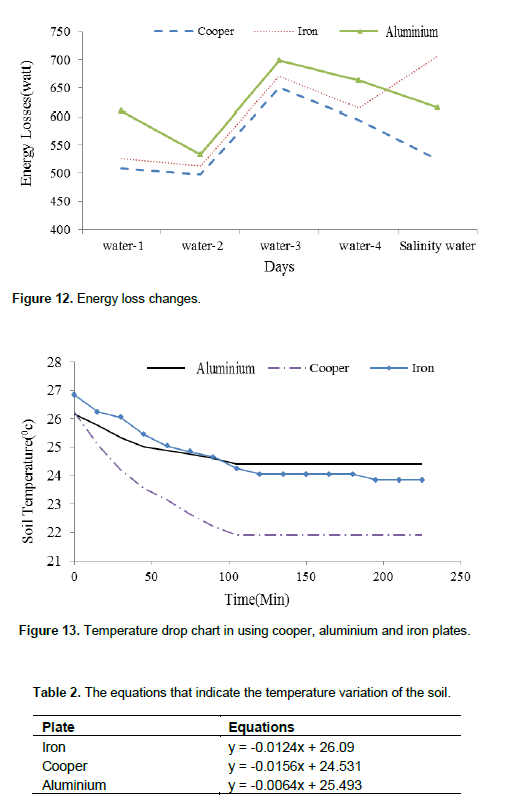 According to the charts in the soil, temperature drop happened in about one third of the time interval sooner than water.

The intermolecular force or van der Waals forces have a great influence on fluids, and also the molecular distance in liquids is greater than that of solids. As a result, the amount of thermal conductivity of liquids is relatively small compared to solids. Therefore, according to Figure 13, the temperature drop in copper-based plate was more than two other plates in the soil so using copper in soil was effective in improving soil condensation capacity.

This means that because of the physical properties and the density of the soil, soil temperatures reduced faster. Due to the nature of the plates, the temperature drop in the use of copper reflux occurs sooner than aluminium and iron.

Iran is facing the problem of water scarcity and is one of the countries located on the dry belt of the earth. The increasing population growth and the need for agricultural and livestock products and the limitation of water and soil resources for agricultural production are the problem of water deficit. In order to increase the water retention capacity in the soil and reduce the evaporation from different layers of soil, it is possible to use Peltier with plates in different materials. In the case study, copper-based refrigerant had the greatest reduction in temperature compared with aluminium and iron plate in water. Also, copper-based plates in soil had faster drop in temperature about 10% in comparism with aluminium and iron plates. This research can be expanded with different materials and in the field to ensure its effect and possibility to widespread. The result of the experiment was not checked statistically; the recommendation to address this issue in further experiments by performing more treatments and repetitions.