World Health Organization (WHO) among other health agencies recommends exclusive breast feeding during the first six months of infancy. However, Infant formula milk (IFM) has been increasingly used as a breast milk substitute due to maternal occupation, death and illness. The product has been associated with infant health complications and even deaths due to its contamination with aluminum (Al), cadmium (Cd), lead (Pb) and nickel (Ni). Both the Kenya Bureau of Standards (KEBS) and WHO have set maximum levels of concentration of these metals in IFM and the latter has set levels of provisional tolerable weekly intake (PTWI). Seven brands of IFM (for age 0-6 months) imported into the Kenyan market and shelved in stores in Nairobi County, were analysed for levels of Cd, Al, Pb and Ni. Except for Cd, all brands of IFM (0-6 months) contained the rest of the trace elements ranging as follows: Al (1.054±0.085 to 2.156±0.423 µg/g); Pb (0.018±0.001 to 0.059±0.002 µg/g) and Ni (0.022±0.001 to 0.032±0.001 µg/g). The estimated weekly intakes were below the PTWI thus indicating safety of the brands of IFM. Other than affirm presence of the elements Al, Pb and Ni in IFM though below the WHO set limits, the findings are a pointer to caution on consumption of IFM although this would be inevitable under unavoidable circumstances. The caution is justified since the consumption of IFM would pose health risk to infants due to exposure and bioaccumulation of the elements. Lead particularly was higher than the limits set by KEBS in most brands supporting this caution.
Key words: Infant formula milk, 0-6 moth infants, heavy metals, WHO, Kenya market.

The World Health Organization (WHO), international and national health agencies recommend exclusive breastfeeding for the first six months of infancy (CDC, 2006; WHO, 2015). In Kenya, about 32% of lactating mothers exclusively breastfeed their babies during the first six months of infancy (Kenya National Bureau of Statistics, 2010). Under unavoidable circumstances, safe and nutritious alternatives such as infant formula milk (IFM), dairy milk and sweetened liquids should be employed. Circumstances that divert breastfeeding include, but are not limited to death of the mother, risk of mother to child transmission of diseases, absence of the mother from the infant for an extended period, personal preferences and beliefs and societal pressure (Lawrence, 2004; WHO, 2004; Mamiro et al., 2005; CDC, 2006). Infant formula milk is the only product which isconsidered nutritionally acceptable for infants under the age of one year (WHA, 2001; Gian et al., 2009). According to Natural Resources Defence Council (NRDC), the infant formula industry is an $8 billion per year business (NRDC, 2005).  Across the globe, huge advertising budgets are spent to convince women that it is better and more convenient to bottle-feed their babies. Infant formula milk (IFM) is categorized by age brackets: 0-6 months, 7-12 months and beyond 1 year. In Kenya, more than seven brands of IFM are imported into the market. Kenya is a signatory to all global conventions with a commitment to promote, protect and support infant and young children feeding practices (KEBS, 2014; Komen, 2009).
Metal pollution as a result of increasing industrialization has penetrated into all sectors of the food industry and as such pose fears for IFM (Gian et al., 2009). Labelling on the package, however, does not indicate the minimal levels of the elements present. As a matter of fact, elements and ions may find route in foods as a result of processing, packaging, farming activities and industrial emission (Khalifa and Ahmad, 2010; Ljung et al., 2011). Food and Agricultural Organization (FAO) of WHO has set provisional tolerable weekly intake limits for metal ions by infants but their poisoning effect even at low levels of exposure cannot be overemphasized and especially that they can bio-accumulate in vital body organs to persist in adulthood (Nevin, 2000; Needleman et al., 2002; Lanphear et al., 2008; Ljung et al., 2011; Salah, 2012). The Kenya Bureau of Standards (KEBs) in Kenya has set standards for the levels of elements in not only IFM but all food products among other commodities (KEBS, 2014). Studies have reported contamination of IFM by various substances such as nitrates, nitrites, aluminium (Al), cadmium (Cd), mercury (Hg), nickel (Ni), lead (Pb) and melamine (Gian et al., 2009; Khalifa and Ahmad, 2010; Burrell and Exley, 2010 and Ljung et al., 2011). In 2008, melamine contamination of IFM in China led to deaths and illness of several infants (Nakashima et al., 2009). China reported an estimated 300,000 victims with approximately 54,000 babies being hospitalized and six infants dying from kidney stones and other kidney damage (Branigan, 2008). A study to determine theconcentration of selected trace and toxic elements in breast milk and IFM reported the concentrations to be tenfold higher than in breast milk; thus confirming IFM as an exposure route of toxic elements to infants (NDRC, 2005).
The aims of the study were to quantify the content of aluminium, lead, cadmium and nickel found in individual cow’s milk-based infant formula and to evaluate the weekly intake in comparison with the Provisional Tolerable Weekly Intake established by Joint FAO/WHO Expert Committee on Food Additives.

Seven brands of IFM powders for the age bracket 0-6 months were purposively sampled from stores in Nairobi, Kenya and coded T, U, V, W, X, Y and Z.

Digestion of the powders followed the procedure by Picciano (2001). Briefly, 2.5 g of powder was accurately weighed into a Kjeldahl flask, 15 ml of concentrated nitric acid and 5 ml of 10% hydrogen peroxide were added and the resulting solution heated until there were no more brown fumes. The resulting mixture was filtered through Whatman paper No.1 into 50 ml volumetric flask and its volume topped up with deionized water to the mark. The measurements for Al, Cd, Pb and Ni were done in triplicates using computerized Varian Atomic absorption Spectrometer (Model: AA-10, Varian, USA). The instrumental parameters are presented in Table 1.

Freshly prepared standard stock solutions were serially diluted andused to obtain calibration curves with linearity values as presented in Table 2. The correlation coefficient values were a good indicator of the linearity for AAS instrument for precision and accuracy of results (Duan et al., 2003). Further, using recovery tests where samples were repeatedly spiked with known amounts of standards prior to measurements were performed to confirm the accuracy of the instruments (Duan et al., 2003). The percentage recoveries obtained were good, falling between 98.1-99.9%.

Data were analyzed with SPSS 17.0 for windows. The mean and standard deviation of means were calculated. The Estimated Weekly Intake (EWI) per body weight of the infant for the metal ions in each brand of formula milk were then calculated based on the feeding table provided in each brand of formula milk (0-6 months). The data were analyzed by one-way analysis of variance (ANOVA) and Duncan’s multiple range tests was used to separate means (P < 0.05).

Except for Cd, all brands of IFM (0-6 months) contained Al, Pb and Ni. These ranged as follows: Al (1.054±0.085 µg/g  in  brand  T to  2.156±0.423  µg/g  in  brand  X);  Pb(0.018±0.001 µg/g in brand V to 0.059±0.002 µg/g in brand W), Ni (0.022±0.001 µg/g in brand X to 0.032±0.001 µg/g in brand T). Except for brands T and V, all other brands had levels of Pb above the KEBS maximum limit of 0.02 ppm. Infants are at a critical point of their brain development and exposure to elements pose severe health risks since the effect is compounded by the fact that even at low levels of exposure, metals bio-accumulate in vital organs and persists in adulthood (Nevin, 2000; Needleman et al., 2002; Lanphear et al., 2008).  The findings  therefore  raise  a health concern  toinfants who consume the brands. A further concern is the labelling of the packages. In this study, Pb was identified in the samples, but not reported on the labels of the containers. These study findings indicate an increased health risk with the consumption of IFM resulting in not only the exposure, but the bioaccumulation of the elements Al, Pb and Ni. 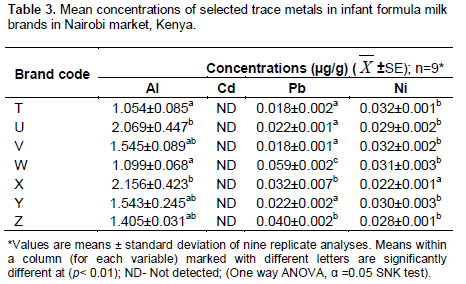 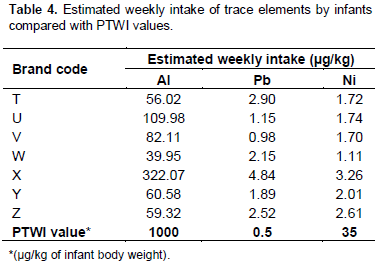 There were statistically significant differences of the elements between brands (p<0.001). This would be expected and these differences can be attributed to the different manufacturing practices, quality of raw materials, and packaging containers used (Khalifa and Ahmad, 2010). Comparing the metal ion levels and the maximum possible weekly intake (Table 4), the EWI of Al and Pb were below the Provisional Tolerable Weekly Intake (PTWI) set by the Joint Committee on Food Additives of the FAO and the EU Scientific Committee for infant feeding, an indication that the IFM are safe for consumption. These findings may generate a debate on whether the campaigns on consumption of IFM should be encouraged although it is understandable that under some unavoidable circumstances exclusive breast feeding is an impossible undertaking. The labels on the IFM packages should include even the minimal safe amounts of all elements as this not only informs the consumers, but have implications on their choice in promoting their consumption.

In this study, we affirm the presence of trace elements (Al, Cd, Pb and Ni) in IFM brands in the Kenyan market. Although below the WHO set limits, the findings are an indication of caution regarding consumption of IFM unless under unavoidable circumstances as the risks of their bioaccumulation are inevitable.

ACKNOWLEDGEMENTS
The authors are grateful to the Government of Kenya through the National Council of Science and Technology (NCST) for funding the research, Kenyatta University for laboratory space and Geology and mines, Kenya for the instrument employed.