A historical glimpse of Hiriyoo: Rethinking the indigenous defense system and military mobilization of the Kingdom of Kafa prior to 1897, Southwest Ethiopia

The present article attempts to reconstruct the fascinating nature of the indigenous defense system and means of military mobilization of the kingdom of Kafa prior to 1897. Kafa, located in today’s South-western Ethiopia, was historically one of the powerful and independent kingdoms prior to its subjugation in 1897. In this study, the researcher relied on available previous multiple sources which include oral testimonies, travel lore, scientific materials and ethnographic data. The researcher employed ethnographic qualitative analysis method comparing them with historical narratives, which is naturalistic approach that helps to understand historic processes and human experiences in a specific historical setting. The findings of the study portray that the kingdom of Kafa had its own distinct defense system and traditional military mobilization for longer years. Among these untold traditional defense system, Hiriyoo (long ditch) was one of the manmade defensive systems dug deep, long and wide around the border areas where enemies might intrude the kingdom. In addition, the kingdom dug Kotino and Kuripo as another supplementary defense system; different insects and natural landscapes; Hokko (drum) used for communication during military mobilization and Kelloo (land gate) system in all corners of the boundary until the final collapse of the kingdom in 1897. 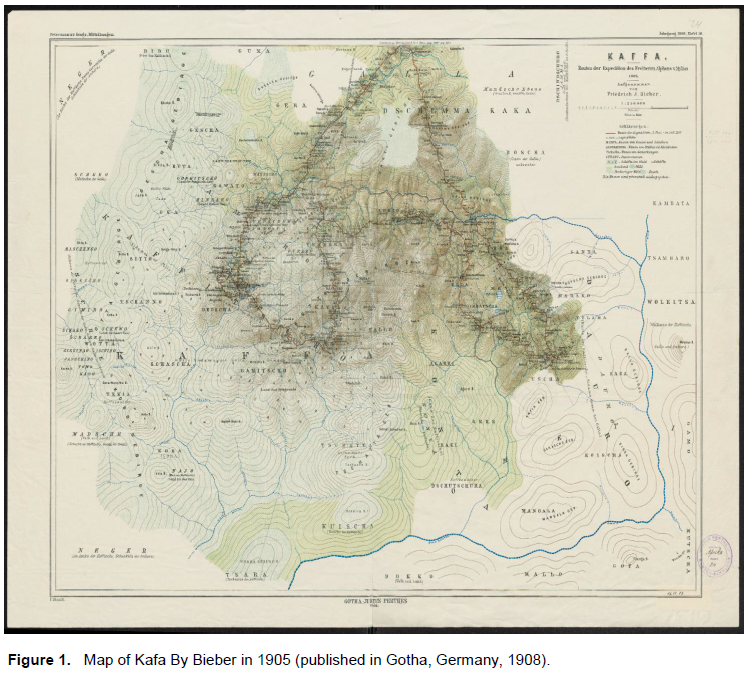 Moreover, Beke also gave his insight that Kafa is a quite wealthy land and extensive territory and was more powerful than any of the (Oromo) kingdoms (Beke, 1843). However, the modern Province of Kafa within the Ethiopian State only includes the highland between the Southern bank of Gojeb and the Omo Rivers. It was boarded from the east by  Omo, Konta  and Dawuro and  on the  southern frontier are  Gofa, Malo and Bako with populations  which to a  large  extent  belong to the  Cushitic groups. It is also boarded from the western frontier by Maji, Bench, Mocha [Sheka] and Massango [Majengir], populated partly by Cushitic and partly Sudanese peoples and on the north by the medieval  small kingdoms of Gera, Gomma and Jimma, populated by the Oromo (Ibid.; Orent, 1970).
Historical evidences indicated that, Kafa during the time of the kingdom was divided into 12 administrative regions locally called Woraafo (region) until the mid-19th century. It was the Bonge-Taato (Bonga king), the sixth king of Kafa, who died ten generations ago; ruled about in the years 1565-1605, ordered the first division of the kingdom of Kafa into 12 dominions of Woraafo (regions) or sometimes called as Iraashe-Showo. These 12 regions were: Kafa, Geesha, Gimbo, Gawato, Charra, Addio, Shasha, Bitto, Deecha, Buta, Wotta and allegedly Goba (Cecchi, 1885 and Bieber, 1920, 1923; Huntingford, 1955) (Figure 2).
These administrative units later developed and expanded into 18 woraafo after the late nineteenth century to the last decades of 19th century (Lange, 1982). Orent in his work also confirmed that Kafa country was divided into 12 administrative provinces (woraafos) during the time of Bonga king (Boongi Taato) in the 1500's. However, it was during the time of King Galli Ginoch (1675-1710), the territory of Kafa expanded during this period and anticipated for the redivision of the kingdom into 18 regions (woraafos) (Orent, 1970).
Since integration to modern Ethiopian Empire, Kafa has be administratively restructured as Kafa Kafa Awuraja   under   Teklay   gizat,   Kafa   Kiflehager,  Kafa akababi Astedader and Kafa Zone during the reign of Imperial regime, the Derg regime and the current EFDR government respectively. This shows the dynamism undergone in the expansion and shrinking processes of territories at different times. Hence Kafa was an Awuraja with its capital in Jimma, ruled by central appointees of the state during the imperial  and the Derg period; Kafa as Kifle-hager or regional administration with its capital of Mizan Teferi at about the end of the Derg regime. Under the current Federal Government, Kafa gained the status of a Zone within the southern regional state. It was restructured based on ethnic, not ancient historical principles as Kafecho-Shekecho Zonal administration, which brought together the Kafecho and Shekecho people. However, since 2002 Kafa became a separate zone (Gezahegn, 2001). Therefore, currently Kafa is one of the administrative Zones located in the Southern Nations Nationalities Peoples Regional State (SNNPRS), one of the nine Regional States of the Ethiopian Federal Government. The region is situated at 4° 43’ 8° 58’ latitude North and 34°  88’39° 14’ longitude East (Figure 3). It could be observed from its relative location, that the SNNPRS is bordered by Kenya to the south, the Sudan Republic to the southwest, Gambela Region to the northwest and Oromiya Region to the northeast (Zegeye, 2017). 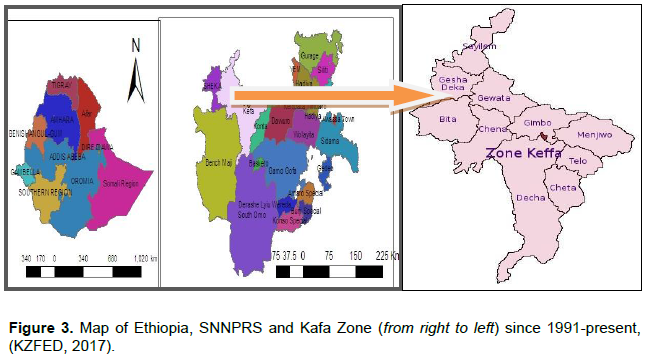 It has been commonly said that the environment of the  southwest Ethiopia’s cool, wet tropical highland may have been served a refugium for a long period. They also are generally hypothesized to have been a domestication centre for several indigenous Ethiopian crops that require moist conditions: enset (Ensete ventricosum), coffee (Coffea arabica), some species of yams (Dioscorea), and other plant (Hildebrand et al., 2010).  Due to the orographic effects and the dense forest coverage that path the Inter-Tropical Convergence Zone (ITCZ), most parts of the southwest highland have received more annual rainfall (>2000 mm) than any other region in north eastern Africa and the Horn (Ibid).
Likewise the highland of Kafa is located in this region with average temperature which is fairly moderate almost in the entire region because of considerable altitude. It constitutes the total area of 10616.7 square kilometres (KZFED, 2017). Accordingly, the region has two physical characteristics; the highlands and the lowlands. The highlands are characterized by undulating and rolling plateaus between 1500-2100 meters above sea level, with slops in the range of 10- 30%.
Recently conducted studies concur that the region lies between 501 of southern Decha, Coca lowland to 3348 meters above sea level of Shetira Mountain in Tello Woreda (Hildebrand et al., 2010). Rainfall varies between 1500 and 2000 mm annually and is abundant during 7 to 9 months of the year (Ibid). The people of Kafa traditionally divided a year into four seasons: Mareho, Qaawo, Naawoo and Yooyo (Inf. WW; AS).
Despite the above seasonal division, traditionally Kafa has three conventional agro-ecological zones based on altitude and temperature: Angeshoo, Guddifoo, and Worefoo (Inf., MM).
With regard to the ecological and geological features of Kafa, one of the German scientific travelers, Grhül stated that the kingdom Kafa was one of the evergreen ecological states to the southwest of Abyssinia in a broader context. His fascination extracts as:
“When the creator made the Central African forest, a piece and cast it down among the mountains bordering on the northern shore of Lake Rudolf (today’s Turkana). Hence, it is about Kafa that is a forest land of dark beauty” (Grühl, 1932).
Moreover, it seems over exaggeration that Leon, cited in Bekele reported that, on the basis of its peculiar ecology and dense forest coverage, Kafa would be regarded as the pearl of Ethiopia (Bekele, 2010:16). Such feature is still an observable fact even in today’s Kafa. As it has been largely pointed out that, the south western edge of Ethiopia has been the typical forested landscape region inhabited with ecological communities who are acquainted with heterogeneous eco-cultural practices and authochnomous knowledge in which they have been used as means of survival (Orent, 1969; Abbink, 1999).  From these, Kafa constituted vast territory to south of Gojeb river with diversified ecological inhabitants since ancient time. In this region, the ancient Kingdom of Kafa was established in the forested mountain ranges where it has been noted for its undulating landscape, mountains and rivers, impenetrable forests, wide vegetation cover and beautiful wildlife, and indigenous forest Coffee where there still remains a fertile area possessing vast capabilities, a salubrious and delightful climate in present Ethiopia (Lange, 1982; Orent, 1969). Thus, this area has not only been remote but also distinct for its wide variety of agro ecological conditions, biodiversities, and ethnic multiplicities.

This study aims to employ an ethno-historical approach using mainly local primary sources and oral traditions and use an ethnographic qualitative analysis comparing them with historical narratives. This approach helps to understand historic processes and human experiences in a specific historical setting. In this study, the researcher relied on available previous multiple sources including oral testimonies, travel lore, scientific materials and ethnographic data. The field data used in the study were collected in 2019 and 2020. Extensive fieldwork was also conducted to collect historic and generate emic ethnographic data as proposed by Creswell (2014) and Vansina (1985) to reconstruct the specific historical settings of the people under study. Reliable oral data and various historical reminisce or narratives were gathered from Key informant interview and Group interview. 20 informants were selected purposively based on their good ability in historical knowledge and oral tradition, occupation and custodian responsibility. Besides, the researcher’s personal and field experience has been helped to obtain various ethnographic data.
In addition to plethora oral tradition, the researcher also carefully consulted all existing local and foreign literature and travelogues produced on Kafa culture history in general. These include the works of local and foreign scholars who conducted their BA and MA thesis as well as PhD dissertations on the history of the Kafa.

Indeed, this study set out to investigate and reconstruct the defining aspects underpinning the traditional defense systems and means of army mobilization of the kingdom of Kafa prior to its conquest.
In light of this research finding, the people of Kafa had given special place to the provision of defensive system and military organization during the time of the kingdom.
Despite the inevitable socio-cultural, economic and political interconnectedness, the peculiar knowledge and traditions of the people of Kafa in making defensive systems and military mobilization remarkably contributed to keeping the security and autonomy of the kingdom of Kafa until its final demise. One of these known defense systems of the kingdom of Kafa was the Hiriyoo, the defensive ditch/trench dug in the border areas of the entire kingdom.
The people of Kafa and the kings usually appreciated the war heroes who performed unique bravery action in war or hunting. Heroes awarded various gifts from the king such as land, slaves and other grants locally, Buuroo. Therefore, warfare helped many individuals to accumulate wealth and gain privileges from the society. At the same time, the people of Kafa and the king disgraced those who hid and retreated from war and sentenced them to harsh punishments. Fulfilling the military service including digging the trenches request of the kings was taken as an obligation of every male member of the kingdom under the close supervision of the Kateeme rasho. Every other member of the kingdom including women had their own contribution and duty in time of war in preparation of provisions and taking care of the land of those who marched to campaign and fulfilling other responsibilities.
The military resistance of Kafa and repulsion of Menelik’s generals’ repeated aggressions, which were armed with modern firearms with backward traditional weapons for the consecutive nine months showed the strength of Kafa’s military organization and the resilience of the defence systems of the people.
The Kafa’s long term military resistance was finally crushed and incorporated into Ethiopian empire in 1897 after the bloodiest war under the command ship of Ras Wolde Giorgis with the active participation of Menelik’s other most experienced generals and army equipped with sophisticated and advanced guns.