Avocado (Persea americana Mill.) is an important economic tree crop grown in home gardens and farms all over Ghana. Although there are some studies on diverse aspects of the crop in several parts of the world, not much has been documented about its morphology in Ghana. This study was therefore conducted to describe the morphology of avocado in the Ashanti and Central Regions of Ghana. Using the avocado descriptor as a guide, morphological analyses of P. americana accessions in eight districts in the two regions were conducted. The study revealed that the avocado accessions had variable morphological characteristics but were more close to the Western Indian accession.
Key words: Persea americana, accessions, morphology, Ghana, economic tree crop, Western Indian.

Persea americana commonly called avocado is a polymorphic tree crop that originated from a broad geographical area stretching from the eastern and central highlands of Mexico through Guatemala to the Pacific coast of Central America (Popenoe, 1920; Smith, 1966, 1969; Storey et al., 1986; Dreher and Davenport, 2013). From its origin, the avocado plant spread very fast to many parts of the world due to its nutritional value and the desire for its fruit. The spread to different parts of the world resulted in different names given to it in different parts of the world e.g. “avocado” in English, “aguacate” in Spanish, “avocat” in French and “abacate” in Portuguese (Ochse et al., 1961; Morton, 1987). In West Africa, P. americana is also known as “custard apple” (Gustafson, 1976) and in Ghana, it is known locally as “pεa” or “paya” in Twi, Fante, Ga and Adangme (Irvine, 1961). The avocado plant is erect and grows up to ≥ 9 to 18 m high with bole diameter ranging from 30 to 60 cm. The leave could be of several shapes including lanceolate, elliptic, oval, ovate or obovate (Morton, 1987; Schaffer et al., 2013) and may be alternate, dark-green, glossy on the upper surface and whitish on the underside. Morton (1987) measured leaf lengths ranging from 7.5 - 40 cm long and found the fruit to be pear-shaped, often necked, oval or nearly round and 7.5-33 cm long in length and may reach 15 cm wide.  The fruit skin is known to be yellow-green, deep-green, reddish-purple or very dark purple to almost black.
The fruit may be speckled with tiny yellow dots, may be smooth or pebbled, glossy or dull, thin or leathery and up to 6 mm skin thickness, pliable or granular and brittle (Morton, 1987). Generally, the flesh of avocado is entirely pale to rich-yellow in colour but in some fruits, there is a thin layer of soft, bright-green flesh immediately beneath the skin. The avocado fruit has a single seed enclosed in two brown, thin, papery seed coats often adhering to the flesh cavity and may be oblate, round, conical or ovoid in shape, hard and heavy, ivory in colour and 5-6.4 cm long (Morton, 1987). The avocado tree crop is one of the most important in Ghana. Local people use the fruit and other parts of the tree for diverse purposes including food and medicine. In the Ashanti region, the avocado fruit is a major component of meals when in season (Abraham, personal observation). The intense utilization of all parts of avocado makes it a crop of great commercial potential in the agricultural sector. The potential for commercialisation has not been utilized in Ghana due to marginalisation of the crop and inadequate documented information on it in Ghana. Moreover, there is the need to conserve all the avocado accessions in Ghana to avoid extinction of any of them. To do this, it is important to determine the accessions of avocado in Ghana. Therefore, this study was conducted to characterize the P. americana accessions in the Ashanti and Central regions of Ghana based on their morphology.

Study area
The study was conducted in eight districts randomly distributed in the Ashanti and Central regions of Ghana between March and October 2008. A minimum of two and a maximum of twelve avocado plants were randomly sampled for study in each study district bringing the grand total of avocado plants studied in all districts to 53 (Adansi South: n = 2; Afigya Sekyere: n = 3; Asante Akyem North: n = 6; Ejisu-Juaben: n = 11; Sekyere East: n = 5; Sekyere West: n = 12; Obuasi: n = 6; Upper Denkyira: n = 8). The GPS coordinates of each plant assessed was recorded and used to produce a map (Figure 1). 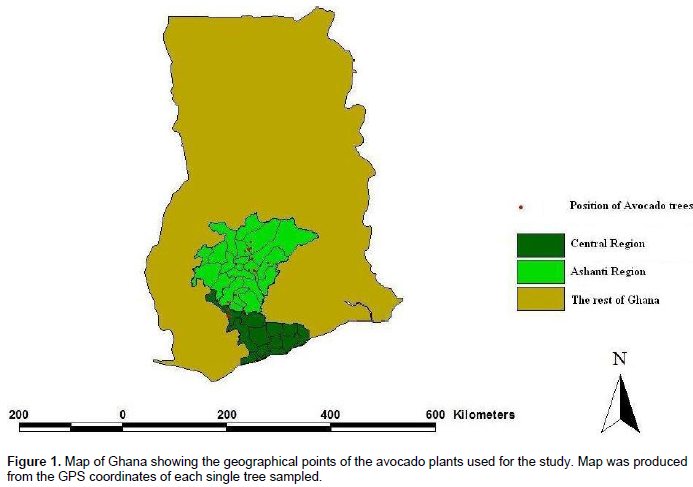 Morphological characters studied
Based on a field guide for morphological studies, data on tree, leaf, fruit and seed characteristics were taken for each avocado plant selected for study (IPGRI, 1995).
Tree characteristics
The tree characteristics studied were canopy spread, tree height, trunk surface, branching pattern, distribution of branches and a measure of the truck circumference at 30 cm above ground level. To determine the canopy spread, the distance from the centre of the crown to the tip of the outermost leaves on two opposite sides of the tree was measured using a 100 m fibreglass measuring tape [Rollins & Sons (London) Ltd, Harlow, Essex, UK]. Tree height was measured with a suunto clinometer (PM-5 Suunto, Valimotie, Finland). The tree heights were classified into 1-4, > 4-8, >8-12, >12-16 and >16 m. The appearance of the trunk surface of the avocado trees was scored according to the criteria described by the IPGRI (1995) such that a score of 3 represented a smooth surface, 7 represented a rough surface and 9 represented very rough. Other tree characteristics such as branching pattern, distribution of branches and the measure of the truck circumference at 30 cm above ground level were described following the avocado descriptor (IPGRI, 1995).
Leaf characteristics
Leaf shape was described according to the criteria suggested by the avocado descriptor (IPGRI, 1995). Data on leaf shape, number of primary veins, leaf apex shape and leaf blade length (cm) were taken.
Fruit characteristics
Fruit shape, ridges on fruit, pedicel position on fruit, pedicel length and nailhead pedicel apex shape, colour of flesh next to skin, colour of flesh next to seed, fruit skin colour and gloss on fruit skin were observed and recorded following IPGRI (1995). Moreover, the fruit length (cm) as the longest part of the fruit, fruit diameter (cm) (the mid-section of each fruit), fruit weight (g), peduncle length (cm) and peduncle diameter (mm) were measured. Fruit skin surface was observed and classified as smooth, intermediate or rough. Using an electronic digital calliper (Powerfix®, Milomex Ltd, Bedfordshire, UK), the average fruit skin thickness of five fruits were determined. Adherence of skin to flesh was graded as slightly, intermediate or strong.
Seed characteristics
For every avocado fruit studied, the shape of the seed and attachment of cotyledons to seed were noted. Moreover, the seed weight (g) was measured with an electronic weighing balance (Sartorius AG, Göttingen, Germany), and the length of seed cavity (cm), diameter of seed cavity (cm), length of seed (cm), diameter of seed (cm) and free space of the seed cavity were measured with an electronic digital calliper (Powerfix®). The length of seed was taken as the measure of the longest part of the seed and the diameter measurement was taken from the mid section of the seed with the base and tip of the seed as reference points.
Data analysis
The frequency of occurrence of the various morphological characters of the avocados was determined. Since a cluster analysis defines a natural population of the same species into distinctively related phylogenetic main groups and subgroups, the morphological characters were studied. The protocol utilized characteristics of the tree, leaves, fruit and seed. In the analysis, the hierarchical single linkage and Euclidean distance method was used to produce a dendrogram of morphological similarities (Statistica, version 7; StatSoft Inc., Tulsa, OK, USA). 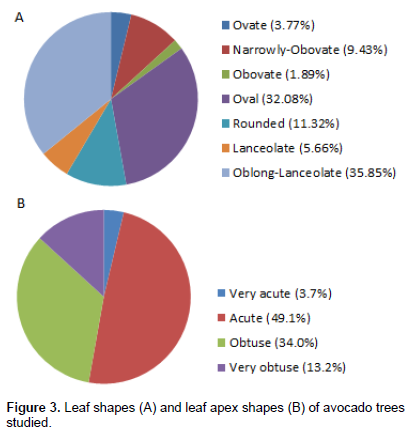 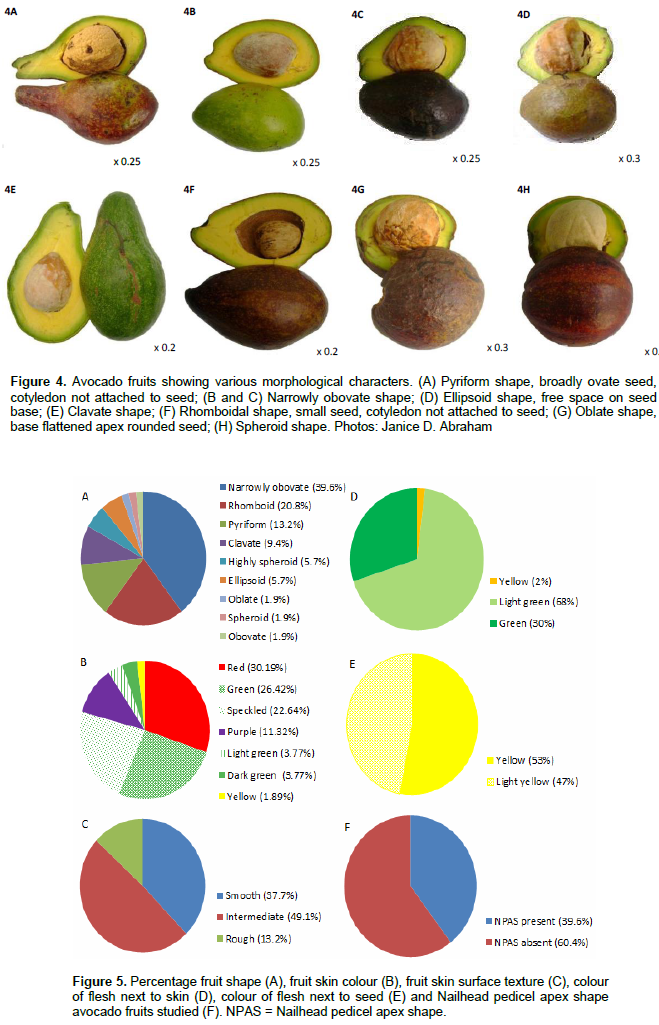 Ridges on fruit
More than half (54.7%) of fruits had partial ridges on  them and 17% were entirely covered with ridges (Figure 6A). There were no ridges on fruits of 28.3% of the plants (Figure 6C). 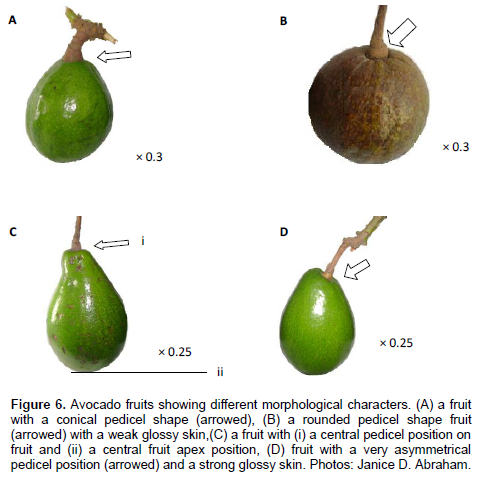 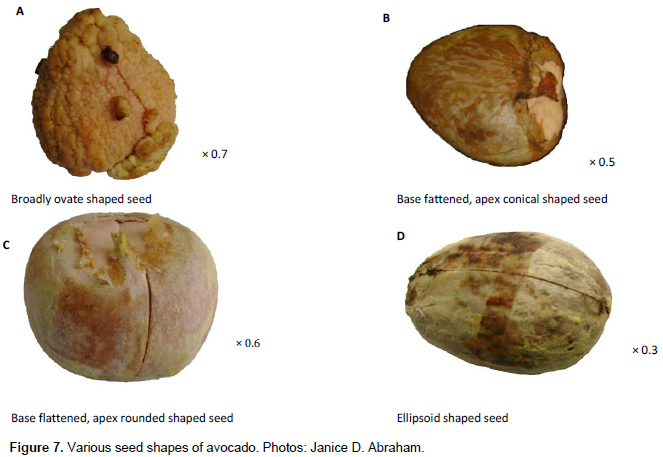 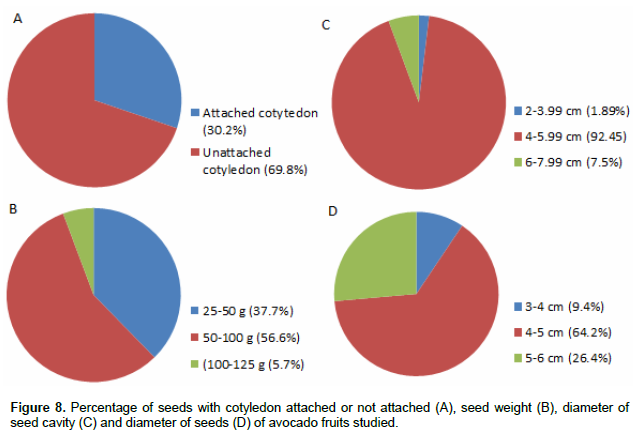 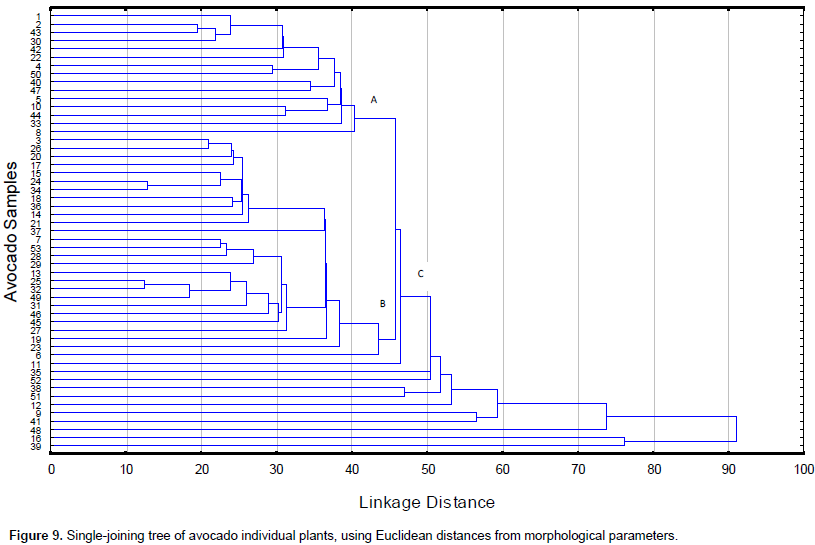 All the avocado trees studied had height above the 3 and 4.5 m range which is recommended for high fruit productivity. This means that the trees studied may not reach their optimum productivity as expected and harvesting may be expensive for the farmers. The leaves and other morphological characters of the avocados studied exhibited characteristics that relate to the West Indian and Guatemalan races. Moreover, the results of the field work indicate the samples from the various districts were not exclusively different from each other. A probable reason may be that the seeds of the same accessions might have been used as propagules by migratory farmers. The accessions in the area might be the same as the ones introduced over a century ago. There is the need to introduce some commercially improved accession to the old stock to bring more genetic diversity and enhance the chances of commercialisation and export of the avocado to make farming and propagation attractive to farmers. There is need for germplasm collection of the existing stock to enhance conservation of genes.