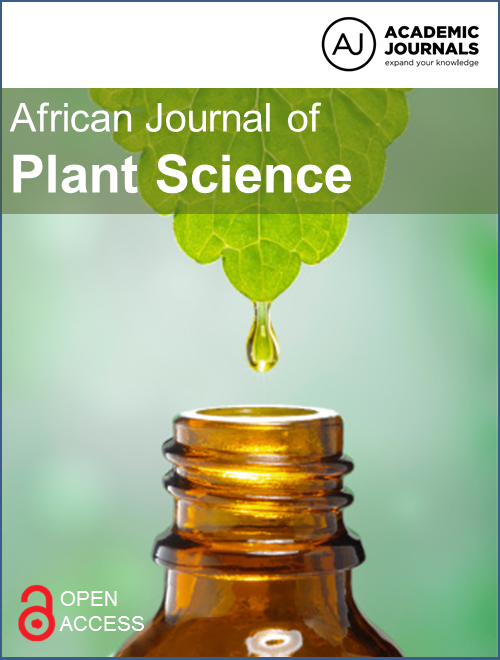 Field survey was done in North Gondar during 2014/2015 and 2015/2016 cropping seasons with the objective of, assessing the importance of faba bean diseases. Disease severity varied across and within districts. Chocolate spot (Botrytis fabae), gall-forming (Olpidium viciae), rust (Uromyces fabae) and aschochyta blight (Aschochyta fabae) were the most dominate and frequently occurring diseases of faba bean. The highest mean severity of chocolate spot (43%) and rust (36%) were recorded at Takusa district whereas the highest mean severity (42%) of gall-forming disease was recorded at Debark district. The association of independent variables with faba bean disease varied among themselves. Variables such as year, altitude, growth stage of the crop and crop conditions were significantly associated with the chocolate spot, gall-forming, and rust diseases. Chocolate spot, gall-forming, and aschochyta blight diseases severity was higher in surveyed fields with an altitude greater than 2,700 m above sea level (masl). However, rust severity was higher in areas with an elevation below 2,200 m.a.s.l. Among growth stages, the highest disease severity of chocolate spot, rust, and aschochyta blight was recorded on fields during the flowering stage.  Therefore, integrated disease management options should be developed for the future for those major diseases of faba bean.

Faba bean (Vicia faba L.) is a grain legume grown worldwide both for human food and animal feed. In addition to its high nutritive value, both in terms of energy and protein contents (24 to 30%), this plant is an excellent nitrogen fixer (Ali et al., 2014; Sahile et al., 2008a; Jensen et al., 2010). It has been produced for centuries in Ethiopia and provides the much needed protein supplement to the diet of rural households. It also plays an important role in the socio-economic life of farming communities and a source of foreign currency to the country (Abebe et al., 2014, Agegnehu and Fessehaie, 2006; Keneni and Jarso, 2002). Ethiopia is considered as, the secondary center of diversity and also one of the nine major agro-geographical production regions of faba bean (Hailu et al., 2014). The primary producers of pulses are small- scale farmers with small and dispersed plots under rain-fed conditions, with substantially lower yields compared to the improved faba bean varieties and international yields (Haile et al., 2016).
The crop occupies the largest areas among legumes next to chickpea with an average productivity of 1.67 t/ha under farmers conditions (CSA, 2015). In spite of its huge importance, the productivity of faba bean in Ethiopia remains far below the crop’s potential (> 3 t/ha). The major constraints, that limit the realization of full yield potential of faba bean and cause instability in yield, in different parts of the country are both abiotic and biotic constraints (Agegnehu et al., 2006; Agegnehu and Fessehaie, 2006; Sahile et al., 2008b; Shifa et al., 2011).  Diseases are among the most important biotic factors, causing faba bean yield reduction. More than 17 pathogens have been reported so far on faba bean, from different parts of the country and the most important yield limiting diseases are chocolate spot (Botrytis fabae), rust (Uromyces vicia-fabae), black rot (Fusarium solani), aschochyta blight (Ascochyta fabae) and faba bean necrotic yellow virus (FBNYV) (Dereje and Tesfaye, 1994).
Nowadays, these crop is threatening by new gall-forming disease (Olpidium spp) with typical symptoms of, green and sunken on the upper side of the leaf, bulged at the back side of the leaf and finally develops light brownish color lesion, chlorotic galls which progressively broaden to become uneven circular or elliptical spots (Hailu et al., 2014). Survey data are useful for gaining insights into the occurrence, distribution and relative importance of different crop diseases (Rusuka et al., 1997; Sahile, et al., 2008b). Therefore, the present study was done with an objective of assessing important faba bean diseases in North Gondar administrative zone of Amhara Region.

Description of the study area
Field survey was conducted in the main cropping season of 2014/15 and 2015/16 on the major faba bean growing areas of North Gondar. North Gondar is bordered on the South by Lake Tana, West Gojjam, Agew Awi and the Benishangul-Gumuz Region, on the West by Sudan, on the North by the Tigray Region, on the East by Wag Himra and on the southeast by South Gondar.  The altitude of the study area ranged from 1,711 to 3,151 m.a.s.l. Hence, we classified the surveyed districts into three categories; less than 2,200 m.a.s.l, 2,200 m.a.s.l to 2,700 m.a.s.l and greater than 2,700 m.a.s.l.
Survey of faba bean diseases in north Gondar
About 76 farmer’s fields were assessed in major faba bean, producing districts in every 5 to 10 km interval along the road ride, to examine faba bean diseases. Diseases severity was recorded by examining visually the whole plants, using percent leaf area affected. The SAS procedures GENMOD and logistic were used. The importance of the independent variables was evaluated in two ways. First, the association of an independent variable alone with faba bean diseases was examined. Then, independent variables with high association to faba bean diseases were added to reduced multiple variable model. Finally, the likelihood ratio test was used to examine the importance of the variable.

The relative importance of aerial fungal diseases varied among districts. Chocolate spot (Botrytis fabae), gall-forming (Olpidium viciae), rust (Uromyces fabae) and aschochyta blight (Aschochyta fabae) were the most dominate and frequently occurring diseases of faba bean, during the two-year survey across districts of N. Gondar administrative zone, Ethiopia. Among the four diseases, chocolate spot, gall-forming disease and rust were the most prevalent diseases compared to aschochyta blight (Figure 1). Likewise, Abebe et al. (2014) reported the importance of those diseases in South Tigray.  Chocolate spot mean severity which ranged from 17.5 to 43.33%, was recorded across surveyed districts. However, the lowest mean severity of the chocolate spot was recorded at Dembia district. In agreement with this finding, it was reported that Debark and Gondar zuria were among the districts where the highest severity of chocolate spot was recorded (Sahile et al., 2008b). 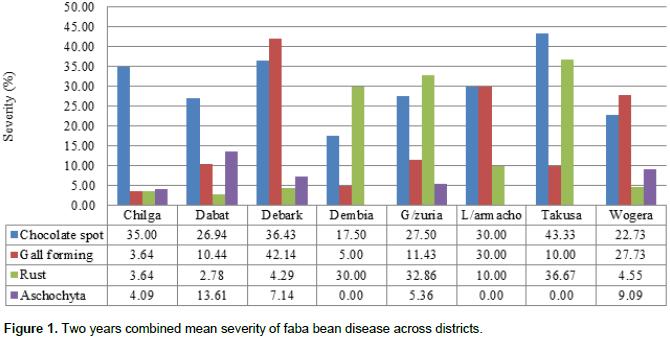 Gall-forming disease had the highest mean severity (42.14%) at Debark district compared to others districts. This agrees with the report of Hailu et al. (2014), who reported gall disease severity related to altitude. Similarly it was reported that, the disease was more important on an elevation between 2,400 and 3,400 m.a.s.l (Li-Juan et al., 1993 and Abebe et al., 2014). This showed that the distribution and severity of the disease were high at higher altitude. However, the disease was widely disseminated in the country and caused an epidemic in short period of time. Thus far, the mechanism of introduction of the disease into the country and its transmission is not known (Hailu et al., 2014). On the other hand, the highest aschochyta severity of 13.61% was recorded at Dabat district. Moreover, rust with the severity of 32.86 and 36.67% was recorded at Gondar zuria and Takusa district, respectively (Figure 1). The diseases severity may be influenced by certain farming systems, field location and/or season. Hence, the association of independent variables with faba bean diseases varied among themselves.
Variables such as year, altitude, growth stage of the crop and crop conditions were significantly associated with the chocolate spot, gall-forming, and rust diseases. However, with the exception of crop conditions, independent variables; year, altitude and growth stage of the crop had a significant association with aschochyta severity (Table 1). All variables were tested in reduced multiple variable model for the chocolate spot, gall-forming disease, and rust. However, only year, altitude and growth stage of the crop was tested in reduced model for aschochyta blight, since crop condition doesn’t have association with the disease. High chocolate spot, gall-forming, and aschochyta blight severity were recorded in 2014 cropping season and this might arise from the favorable climatic conditions in the first growing season. In addition to this, chocolate spot, gall-forming, and aschochyta blight disease severity were higher in surveyed fields, with an altitude greater than 2,700 m.a.s.l. In line with this, Sahile et al. (2008b) reported that, the combined effect of year and altitude had a significant effect on chocolate spot development.

Gall-forming disease severity was higher on those fields with vegetative state of faba bean, having poor crop conditions and especially in the first season of the survey. Similarly, it was reported that, chocolate spot disease severity was relatively higher above 2500 m.a.s.l. This suggests that, the relatively moist climate at mid and higher altitudes is more favorable for the disease development (Assefa and Gorfu, 1985; Sahile et al., 2008b). Among growth stage, the highest disease severity of chocolate spot, rust, and aschochyta blight was recorded on fields during the flowering stage. Similarly, it was reported that significant variation in a chocolate spot at flowering, pre-podding and podding stages of faba bean with the highest severity was at flowering (Sahile et al., 2008b). Stoddard et al. (2010) reported that, the most important damage by chocolate spot usually occurs when plants are at flowering stage, since this is when the environmental conditions are often more conducive to disease development, decaying flower petals become more available for the growth of fungus and yield reductions, which may be serious due to spread of the pathogen from the flowers into the developing pods.
Rust severity was higher at flowering and in an areas with an elevation below 2,200 m.a.s.l (Table 2). According to Nigussie et al. (2008), faba bean rust has no significant effect in the highland areas of Ethiopia. Likewise, it was reported that, rust was relatively higher below 2,450 m.a.s.l due to the relative humidity and warm climate that favors the disease development (Dereje and Tesfaye, 1994; Hassen et al., 2011). In agreement with this, Stoddard et al. (2010) reported that rust is favored by warm temperatures (17 to 22°C) and cloudy weather conditions. Overall, the importance and distribution of diseases varied as a result of climatic change and other bio-physical phenomenon. Chocolate spot, gall-forming and rust diseases were the most prevalent diseases in surveyed districts, with the highest mean severity of 43, 42, and 36%, respectively. On the other hand, chocolate spot and gall-forming diseases were important in areas with higher altitude, compared to rust. Finally, integrated management options should be developed for the future for those major diseases of faba bean in, north Gondar.