The emergence of hereditary republican dynasties is part of a regional trend, raising concerns about the decline in democracy, government accountability, nepotism, and grand corruption. Second generation dynasts now rule in Democratic Republic of Congo, Djibouti, Gabon, and Togo. Often treated as exceptional aberrations, or theorized under other conceptual tools, this article examines Equatorial Guinea as a case study of ‘dynastic republicanism.’ After a brief theoretical discussion classifying this regime type among other forms of dynastic rule, and after making an historical comparison to Napoléon’s attempt at establishing a hereditary dynasty in the wake of the French First Republic, this article will employ qualitative biographical method to explore the Mongomo clan of Equatorial Guinea in order to show how a kin group can establish itself in absolute power in a modern republic, then corruptly promote what is otherwise anachronistic hereditary rule. The conclusion will enumerate comparative advantages of dynastic style, and make predictions concerning the future of hereditary succession in Equatorial Guinea.

Varieties of dynastic rule and the lesson of Bonapartism
Over one quarter of all the states in the international system are headed by family dynasties. They are not, of course, all dynastic republics like Equatorial Guinea. There are many varieties of dynastic rule. Some states have constitutional monarchs, others monarchs absolute. Some are governed by democratic political families who come to office through elections, and others by dynastic heirs who seem to be ‘born to rule.’ With so many cases, one thing is clear. Dynasty is no archaism, no endangered species on the verge of extinction, no transient passing phase. Every historical era, every geographical region, every polity, society and culture breeds some form of dynastic rule (Duindam, 2016). So the question for modern thinking people is, why? Why do people accept to be ruled by other people’s families? Why even in modern republics, where progressive social norms have swept away other obsolete traditions, do citizens still support dynastic hiers? What kind of atavistic behavior is this? Is it an anachronism doomed to extinction? Or does dynastic style provide some kind of comparative political advantage?
In political science, contemporary ‘dynastic systems’ must be classified into regime types. A traditional royal family in a constitutional monarchy is an altogether different species from a modern dictatorship in an authoritarian republic. Confusing Queen Elizabeth II with Bashar Al-Assad is more than a mistake of persona. It is a confusion of regime type. Consider how ‘monarchy,’ the system of government headed by a single person who is the sovereign, is conventionally classified into two sub-types. In an ‘absolute monarchy’ the monarch rules as an autocrat and weilds effective, often absolute power. In a ‘constitutional monarchy’ the monarch is a ceremonial figurehead subject to a constitution. While such a constitutional monarch is nominally sovereign, it is the people, through their representatives, who exercise that sovereignty. A constitutional monarch weilds limited power or no political power at all: that is ‘reigns, but does not rule’ (Bagehot, 1867).
Explicitly distinguished from monarchy, the ‘republic’ is not a form of hereditary rule, not a family patrimony, nor a traditional patrimonial system (Weber, 1968). A republic is a public institution, a system of government where supreme power rests with its citizens: res publica, the ‘public thing’ (Cicero, 2000: p. 64). Like monarchies, republican dynasties must also be classified into sub-groups. Mention these names Assad, Kabila, Castro, Kim, and what comes to mind are pejorative labels which may get inextricably entangled with dynastic regimes: dictatorship, tyranny, autocracy, despotism. Yet to confound these authoritarian dynastic republics with dynasty per se is an analytical error. Dictatorship is a system of unlimited authority by a ruler who has absolute power. Tyranny is when a ruler depends on military might rather than on consent for his power. Autocracy means power of one person over others, that is, a kind of supreme, uncontrolled, unlimited authority. While dynasties may produce autocrats, and autocrats may found dynasties, dynasty is defined as a system where power is held by a family, a succession of rulers who belong to the same family.
Dynasties can be monarchical or republican, democratic or authoritaian (Table 1). All ‘dynastic republics,’ for instance, are offshoots of personal rule. They are necessarily authoritarian regimes. In the Caucuses, Azerbaijan is ruled by the Aliyev family (Wilson 2013); in sub-Saharan Africa, Gabon is ruled by the Bongos (Ndoutoum-Eyi, 2013), Equatorial Guinea by the Mongomo clan (Liniger-Goumaz, 1989), Congo-Kinshasa by the Kabilas (Ngolet, 2011), Togo by the Gnassingbés (Attisso, 2012) and Djibouti by the Mamassane clan (Coubba, 1993); in the Middle East, Syria by the Assads (Seale, 1989); in the Americas, Cuba by the Castros (Castro and Collins, 2009); in East Asia, North Korea by the Kims (Martin, 2006); and in Southeast Asia, Singapore by the Lees (Lee, 2000). Dynastic succession of a hereditary heir, be it a son, brother, cousin or nephew – always male – is achieved through un-free or unfair elections. 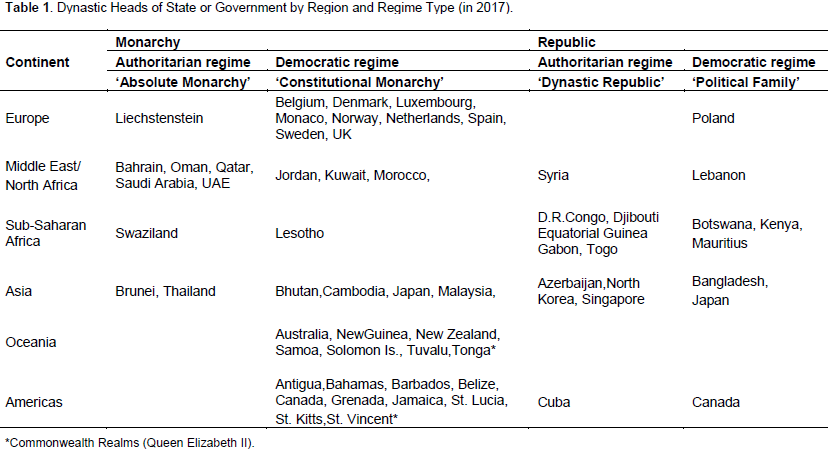 THE DYNASTIC REPUBLIC OF EQUATORIAL GUINEA

Unlike most of the other dynastic republics in region, the Republic of Equatorial Guinea has not experienced an inherited transfer of power from father to son. However, the 1979 coup against President Macias Nguema was devised by one of his so-called ‘nephews,’ President Teodoro Obiang Nguema, who is currently preparing his son Vice-President Teodorin Obiang Nguema for dynastic succession (the critical fifth stage). The term ‘nephew’ is here used in the Fang kinship system of clans and not blood lineage. Teodoro was a member of his so-called ‘uncle’s’ inner circle. He had been head of the National Guard until 1979, when a drug-crazed Macias started executing some of his national guardsmen. Obiang’s soldiers and half-brother had complained about not having received salaries for several months. One of these had been executed by Macias. Other family members had also been executed. His inner circle of Mongomo Fang feared their boss had gone insane. That was why Obiang and other insiders from the ruling Mongomo Clan overthrew Macias in what they hoped would be a quick and bloodless coup. His clan still holds most positions of power in the country, being both a system of kinship and a network of state power (Figure 1). 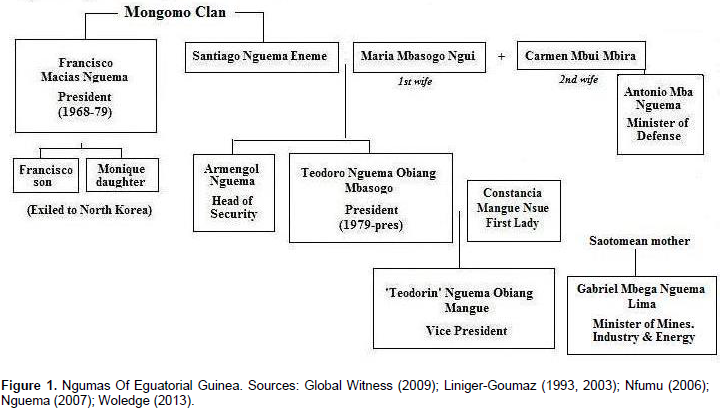