Economic relations of Ethiopia and India: Trade and agricultural investments after 1991

The main objective of this article is to critically examine the Post-1991 bilateral trade relations between the two countries and Indian agricultural investments in Ethiopia. To achieve the objective of this article, the study used qualitative research methodology. Data were collected from both primary and secondary sources. Available literature was also reviewed. For the collection of primary data, in-depth interviews were conducted with officials from Ethiopian Investment Commission, Ministry of Foreign Affairs, Ministry of Trade, and Agricultural Investment and Land Administration Agency. The findings from data analysis show that the economic relationships between the two countries are in favor of India in trade and agricultural investments. The study showed that Ethiopia has chronically run a negative balance in its trade with India. Ethiopia’s trade deficit can largely be explained by the unequal terms of trade between agricultural commodities (the country’s major exports) and capital goods (the country’s major imports). With regard to agricultural investment, Indian agricultural investments have both positive and negative impacts on local peoples where they are operating. Indian Agricultural investments in Ethiopia created permanent and temporary job opportunities for Ethiopians; it has also increased government revenues and brought foreign currency and technology transfer. On the other hand, Indian investments in agriculture have caused the displacement of smallholder farmers and the degradation of natural resources. In response to trade imbalance, Ethiopia needs to focus on diversifying the composition of its exports and improving the business climate through infrastructural development, building strong institutions and reducing bureaucratic problems. Indian agricultural investments in Ethiopia also need encouragement, support and critical follow-up so that the expected benefit would be insured.

Globalization is a common phenomenon that leads to an intensification of worldwide interconnectedness through trade, investment, finance, migration and diffusion of culture (David, 1999). In  the  21st  century,  the  world economy can be considered as a global economic system, which is characterized by international division of labor, internationalization, and integration of production and exchange  that  operates  on  the  principle  of market economy (Tbilisi State University, 2014). In the global economic system, there is a mutual interdependence of the various national economies.
This time, it is difficult to find example of a closed economy and all economies of the world have become mostly open (Vijayasri, 2013). Trade has become a decisive issue largely because countries’ economies are now more open to flows of imports and exports than ever. This has occurred because of technological changes as well as consequent changes in government policies (Milner, 2013). In today’s globalized world, trade is a very crucial activity for states overall development and it has become an important aspect of international relations (Kegley and Wittkopt, 1989)
According to Rourke (1989), “the expansion of trade increased interrelationships between international economic activities and domestic economic circumstances”. Contacts between India and Africa existed since ancient times when Indian merchants conducted relatively extensive trade activities along the eastern coast of the African continent (Raja, 2006).
According to Runoko (2016), “close relationships between Africa and early India have existed for more than two thousand years”. India has close relationships with African countries in terms of historical, cultural, geographical, political, economic and commercial aspects (Manoj, 2010).
Following its independence, India has been playing a crucial role with regard to the struggles against colonialism and racism in the international system. However, there were little diplomatic relations between Ethiopia and India until 1948. After its independence, India quickly established diplomatic relations with Ethiopia and its diplomatic mission led by Sardar Sant Singh was sent to Ethiopia. According to Ethiopian Ministry of Foreign Affairs (2015), “It was in July 1948 that Ethiopia and India first established diplomatic relations at the level of legations. Full Diplomatic Relations were established in 1950 with the assignment of Mr. Amanuel Abraham as the first Ambassador of Ethiopia to India”.
Ethiopia was the first country from Africa which opened its Embassy in India, New Delhi. Ethiopia and India carried close cordial relations during the long reign of Emperor Haile Selassie (Manoj, 2010). The bilateral relations were strong during the Imperial Regime. However, after the overthrow of the Imperial Regime by the military Junta in 1974, the bilateral relations were limited to cooperation in international forums like Non-Alignment Movement.
During the Ethiopian-Somali War, between July 1977 and March 1978, India supported Ethiopia's right to defend itself and told the Somalian government to respect the Organization of African Unity (OAU) charter. After Ethiopian People’s Revolutionary Democratic Front (EPRDF) took power in 1991, relations have gradually improved with increasing diplomatic contacts, trade and investment in Ethiopia’s economy (Embassy of the Federal Democratic Republic of Ethiopia in India, 2011). Economic and Diplomatic relations between Ethiopia and India began with a trade agreement in 1997. Today, through South-South cooperation both nations are cooperating in various areas of trade and commerce. The recent visit of higher officials of the two countries to sign bilateral agreements for fastest economic growth has strengthened the linkages between Ethiopia and India in a multi-dimensional sense (Ethiopian Economics Association, 2009).
India is one of the largest foreign investors in Ethiopia and Indian companies have been playing a prominent role in the area of investment. India’s investment in Ethiopia has now reached over US $5 billion. Currently, more than 600 Indian companies have investment licenses and they are engaging in textiles, mining, leather and agricultural activities (such as floriculture, crop farming, vegetables and fruits (Ethiopian investment commission, 2015).
Currently, literatures are fragmented and no comprehensive document is available on assessing the Post-1991 Ethio-India economic relations with particular reference to trade and agricultural investment.  Therefore, this paper has attempted to fill the gap in the literature by providing a comprehensive study on the economic ties between Ethiopia and India.

To examine the post-1991 Ethio-India economic relations, the study employed qualitative approach. A qualitative approach is concerned with the subjective assessment of attitudes, opinions and behaviors. Such an approach to research generates results either in non-quantitative form or in the form which are not subjected to rigorous quantitative analysis (Kothari, 2004). To carry out this study, the researcher used both secondary and primary sources of data.
Documentary reviews were triangulated with unstructured in-depth interviews with officials from different organizations.

The post-1991 Ethio-India trade relations
As a part of Structural Adjustment Programs (SAP) in Ethiopia, comprehensive trade reforms for both exports and imports has been carried out since 1992. Among others, reduction of tariff and non-tariff barriers, harmonization and simplification of tariffs, including tariff lines and dispersions, removal of quotas, reduction and gradual elimination of all controls including those on domestic prices, deregulation and liberalization of investment policies were carried out (Hassen, 2008).
Modern economic and diplomatic relations between Ethiopia and India began with an agreement that was signed on March 6, 1997. That trade agreement laid the framework of cooperation to expand the trade relations between the two countries (Tages, 2016). Following the trade agreement, bilateral Investment Promotion and Protection Agreement (BIPPA) was signed in July 5, 2007, to strengthen relations in the economic and investment areas. More importantly, during the first India-Africa Forum Summit in April 2008, India had announced the Duty-Free Tariff Preference Scheme (DFTP) for least developing countries (LDCs) and Ethiopia was among the first countries that utilized the DFTP.
Ethiopia and India also signed Double Taxation Avoidance Agreement (DTAA) on May 25, 2011, during the second India-Africa Forum Summit held in Addis Ababa. Mathews (2016) concluded that despite the total volume of the bilateral trade between Ethiopia and India has been increasing from time to time, the trade balance is in India’s favor because of lack of export diversification on the Ethiopian side.
Ethiopian export products to the Indian market
As shown in Figure 1, in 2014, almost all Ethiopia’s export earnings were derived from primary products. From these, 59% of the export is covered by Agricultural Crops (both processed and unprocessed), followed by minerals (gold and others precious metals) which covers 27%. Hide, skin and leather products and footwear cover another 12% of Ethiopia’s exports to the Indian market. Other export items constitute a mere 2%. The export basket of Ethiopia shows that Ethiopia mainly exports primary goods such as food, live animals, vegetables, leather, coffee, tea and cocoa. 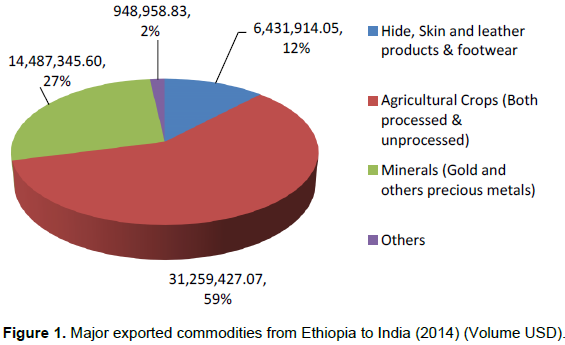 Summary of trade balance between Ethiopia and India
Bilateral trade volumes have risen sharply over the last 15 years and in 2015, the bilateral trade reached a peak of $1.2 billion and India is the second most important source of imports for  Ethiopia, contributing 7.4% of all Ethiopia’s import next to China. Following recent agreements, trade between the two countries has increased from $ 74.1 million in 2000 to $1.1 billion in 2014. This indicates that the trade relation between the two countries is increasing starting from 1992 due to the economic policy adopted by EPRDF government (Tages, 2016). Table 2 shows this reality. 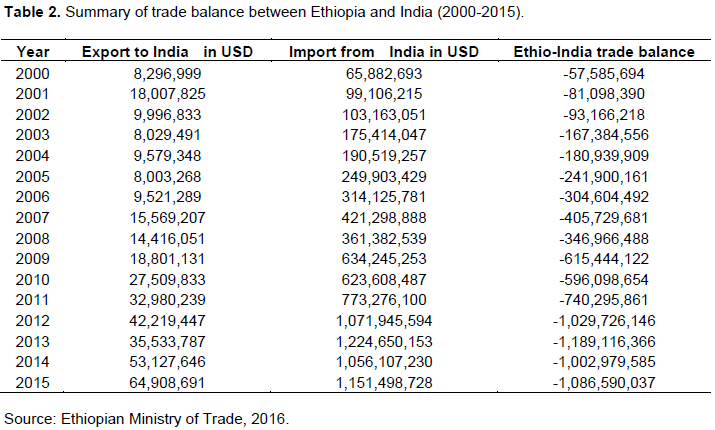