A theoretical analysis of corruption in Sudan: Causes, diagnostics, consequences, and remedies

This study is a descriptive and a theoretical analysis of corruption in Sudan. Given the causes and current level of corruption in the country, the current paper aims to determine some of the possible remedies of corruption. The study investigates the political, economic, social and legislative factors that contribute to the spread of corruption in the county. It analyzes—based on the literature—whether corruption is contagious and if corruption does corrupt. In addition, it suggests that the absence of the rule of law, collectivist nature of Sudanese society, in addition to the low pay cheque of civil servants contribute to the spread of petty corruption in the country. Lessons learned from success stories in fighting against corruption such as Hong Kong and Singapore as well as stories of failure from other countries are also presented. The research concludes by suggesting a holistic strategy that includes legislative, educational, business and economic dimensions to fight corruption in Sudan. Needless to say, nothing can really be accomplished without a strong will and commitment from the leadership. Although this paper considers Sudan as a case study, its suggested strategy is completely generic and applicable in all other countries that suffer from a high level of corruption. 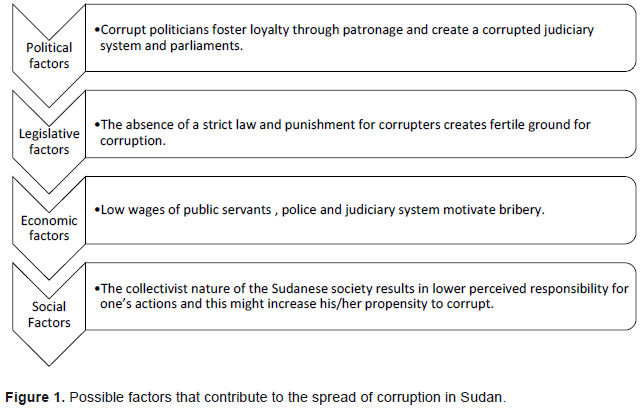 One of the major threats to Sudan's development is the high level of corruption that has hit all its agents. In 2017 Sudan ranked as the world’s 5th most corrupt country according to the Corruption Perception Index (CPI). This research studied the political, legislative, social and economic factors behind the spread and tolerance of corruption in the country. In addition, it discusses the different diagnostics and consequences of the high level of corruption in the country. Based on other countries’ experiences in fighting against corruption, the study concludes by suggesting a holistic strategy that is based on two phases to reduce the corruption level in Sudan. The strategy constitutes four approaches that are: the legislation approach, the education approach, the businessman approach and the economic approach. The first phase aims to discourage corruption through strengthening the rule of law (legislation approach) and spreading knowledge about the evils of corruption (educational approach). This helps to change people's perception of corruption from low-risk activity to a high-risk one. The second phase aims to encourage anti-corruption through buying out corruption by improving the wage polices to decrease the incentive to corrupt (businessman approach). In addition to increasing the role of competition in the market (economic approach), this phase aims at changing the perception of corruption to a low-return activity. It must be stated that nothing can be accomplished in the war against corruption without great will and a high level of commitment from the leadership.
Although this paper considers Sudan as a case study, its suggested strategy is completely generic and applicable in all other countries that  suffer  from  a  high level of corruption.