State capture is one form of corruption that has received very little research interest over the years. This could be attributed to the fact that many societies particularly in the developing world seem to have institutionalized it. State capture is a manifestation of government failure which involves the manipulation of bureaucratic rule and formal procedures by business and political elites through family ties, friendship or social groups so as to influence state policies and laws in their favor. The aim of this paper was threefold: First, to give an elaborate and detailed discussion surrounding the phenomenon of state capture from a public finance perspective; second, to discuss the extent of state capture in Zambia citing instances of state capture and how this negatively impacts on society at large; and third, to examine the effects of state capture on key socioeconomic outcomes and broader governance while making comparisons with other countries. Analysis took the form of extensive review of literature and descriptive analysis focusing on frequencies, trend analysis and simple measures of association. This paper outlines that state capture is a manifestation of government failure and is based on the principles of the predatory government view of the state in which state agents act as utility maximizers. It establishes that state capture is a combination of a weak institutional and governance structure which gives room for rent-seeking, lobbying, election rigging and class formation. Further, the study establishes that in Zambia, although the perception of state capture has reduced slightly, it  exists and has an effect on socioeconomic outcomes such as human development and the growth of firms. The paper concludes by stressing the need to put in place strong social and political institutions that will help reverse this dangerous trend.
Key words: State capture, corruption, market failure, pareto optimum, rent seeking, lobbying, class formation, logrolling.

Data
To establish the corruption (state capture levels) this study used secondary data on corruption and governance perceptions obtained from Transparency International (TI) and World Bank websites, respectively. The TI provides the corruption perception index (CPI) while the World Bank provides the worldwide governance index (WGI). The WGI are composite governance indicators based on over 30 underlying data sources.  These data sources are rescaled and combined to create the six aggregate indicators using a statistical methodology known as an unobserved components model. The six indicators include; voice and accountability, political stability and absence of violence, governance effectiveness, regulatory quality, rule of law, and control of corruption. Key to this study is the “control of corruption” and “government effectiveness” dimensions. The control of corruption indicator captures perceptions of the extent  to  which public power  is  exercised  for  private  gain, including both petty and grand forms of corruption, as well as "capture" of the state by elites and private interests. The government effectiveness indicator reflects perceptions of the quality of public services, the quality of the civil service and the degree of its independence from political pressures, the quality of policy formulation and implementation, and the credibility of the government's commitment to such policies (WGI. 2018). The study also obtained the Human Development Index (HDI) series from the United Nations Development Programme (UNDP) website. The study further made use of the 2013 World Bank’s Enterprise Survey data on Zambia. The World Bank Enterprise Survey is a cross-sectional dataset which gives us the firm level perspective on corruption. The survey collected information from 720 firms operating in Lusaka, Livingstone, Ndola and Kitwe. The study also undertook an analysis of the Auditor General’s Reports in Zambia.
Methods
The analysis took the form of extensive review of literature and descriptive analysis focusing on frequencies, trend analysis and simple measures of association. It is worth noting that the measures of association do not imply causality. Therefore it’s difficult to establish causality because is difficult to prove and measure. The corruption perception index (CPI) as well as the World Bank Enterprise Survey data used in this study is based on perceptions and raised concerns of perception bias. However, it gives us some indication of the levels of corruption. 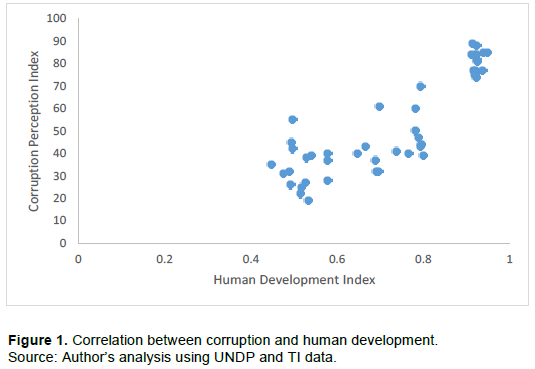 State capture/corruption and governance
State capture as highlighted earlier can exist in various forms. Figure 2 shows the trends in the perceptions of the extent to which public power is exercised for private gain, including both petty and grand forms of corruption, as well as "capture" of the state by elites and private interests. The indicator takes values ranging from approximately -2.5 (weak) to 2.5 (strong). The time series in the control of corruption indicator shows that Zambia is still in a weak position. It indicates that there has been steady improvement in control of corruption from -0.84 in 1998 to -0.39 in 2008, and then a fall to -0.51 in 2010 then improvement -0.28 in 2012. The indicator has fallen slightly in the recent years. The governance effectiveness followed a similar path.
Firm level experience of corruption
Figure 3 shows the Zambian firms’ experience of corruption. It shows an indication of the levels of corruption at firm level. About 30% of the firms identified corruption as a major constraint and this is lower than the sub-Saharan African (SSA) countries’ average of 41%. The average number of firms that were expected to give gifts to public officials to get things done was about 10%.  Those firms that were expected to give gifts to secure government contracts was 28%. The bribery incident rate stood at 16%.  All  the  indicators are lower than the SSA indicators. 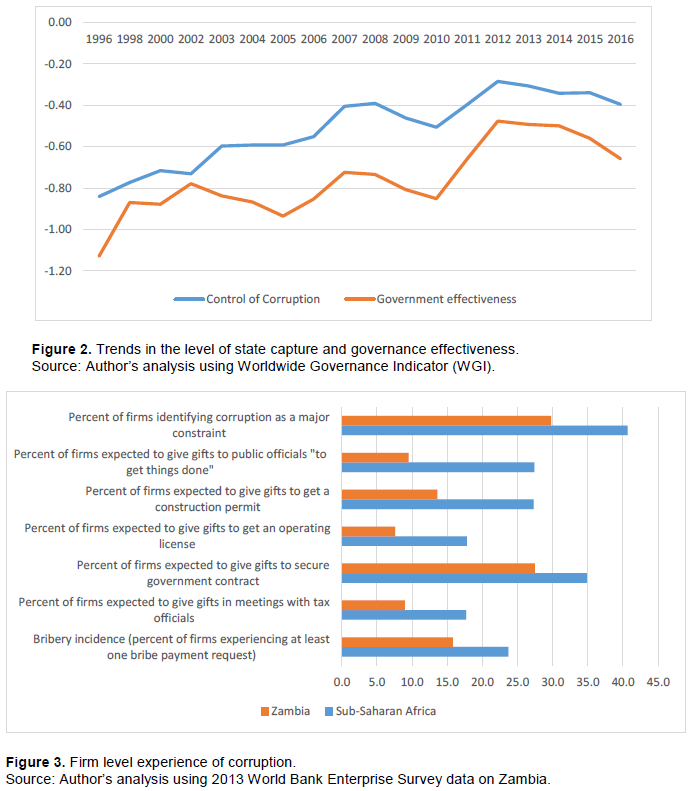 The institutionalization of state capture in many societies particularly those in developing countries has contributed to the lack of academic interest in the phenomenon. This paper outlines that state capture is a manifestation of government failure and is based on the principles of the predatory government view of the state in which state agents act as utility maximizers. State capture is a combination of a weak institutional and governance structure which gives room for rent-seeking, lobbying, election rigging and class formation. With weak institutions politicians have significant influence and authority to manipulate the electoral system, appoint the judiciary and the electoral body resulting into decisions that advantage them at  the  cost  of  society  on  the  one hand. On the other hand, firms are able to shape the decisions taken by the state so as to gain specific advantages, often through the imposition of anticompetitive barriers that generate highly concentrated gains to selected powerful firms at a significant social cost.
The paper has laid down that state capture is not merely a symptom but also a fundamental cause of poor governance as the captured economy is trapped in a vicious cycle in which the policy and institutional reforms necessary to improve governance are undermined by collusion between powerful firms and state officials who reap substantial private gains from the continuation of weak governance. The study has established that corruption is rife in Zambia and state capture exists although the perception of state capture/corruption has reduced slightly. The study also reveals corruption/state capture has an influence on socioeconomic outcomes i.e. there is a positive association between corruption/state capture and human development. Further, it has been established that state capture/corruption is one of the major constraints to the operations of businesses particularly those that are not involved in corruption. This in turn affects the growth of the economy and employment creation. This is because economic growth and employment creation result from the growth of firms.

Based on the literature review and analyses, this study recommends that;
(1) In order to help achieve government’s objective of poverty reduction, sustained economic growth, employment creation among others, there is great need to ensure that the various forms of corruption are addressed.
(2) Strengthening institutions particularly with regard to electoral and judicial systems and ensuring that they are fully independent. This can be done by amending the necessary clauses of the constitution. This can help reduce the levels of corruption/state capture.
(3) Corruption retards growth of firms therefore addressing it would help enhance growth of firms which would in turn spur economic growth and employment creation.
(4) It is important that those elected are given a constant reminder that, their interests should be in fulfilling their duties to the nation that they were elected as opposed to fulfilling self-interest.
(5) Lastly, as advocated by the developmental state, it is recommended that the state should remain autonomous in terms of the content and processes of decision-making. In as much as it has to work hand in hand with businesses, this must not translate into state actors working for, and at the instruction of, a particular business entity.
(6) Much of the analysis has focused on grand corruption, rather than other forms of corruption. This may render any efforts to fight corruption ineffective.