Corruption and fiscal federalism in Nigeria: Analysis of the federal budgetary process, 1999 â€“ 2016

Corruption is perhaps the biggest challenge to Nigeria’s development and the integrity of the country’s fiscal monetary system. Since independence in 1960, corruption has been a destabilizing factor in the country’s progress. It however gained pronounced ascendancy during the Second Republic, forcing a greater percentage of the country’s population into serious economic hardship leading to the introduction of the Structural Adjustment Programme (SAP). This malignant pandemic has not abetted till date. This paper interrogates corruption and fiscal federalism in Nigeria through an analysis of the federal budgetary process from 1999 to 2016. It adopts the political economy approach as the theoretical framework. The study recommends amongst others that the political elites must rise to the challenges of good governance, by waging wars against corruption through institutional strengthening and patriotism by all citizens.

In order to explain the phenomenon under study, and properly understand the nature and dynamics of contemporary Nigerian politics, a reflection of our historical antecedents to evaluate how Nigerian society has evolved since the advent of imperialism and colonialism and understand the socio – economic conditions of their present material base is significant. This must be accompanied by an appraisal of her contemporary experience (Barongo, 1978).
The nature of political life in a particular society, the types of institutions that are created and sustained and the peculiar patterns of political process are a function of the interplay among three main factors, namely, the condition of the material base of society, the historical experience of that society and the actor’s perception, interpretation and response to environmental stimuli. The role of culture, that is to say, the values of the people, their beliefs and the dominant systems of ideas in shaping the political process and in dictating particular forms of political organization, is by no means being minimized. But the values, beliefs and ideas have their basis in and reflect very fundamentally on the nature of the economic base and relations it creates among the people as well as the historical experiences of society. It is primarily the material environment which determines the formation of cleavages in terms of social groups and classes with competing interests and thereby defines the character and structure of political interaction in a competitive bargaining situation (Barongo, 1978). Nigeria was initially inhabited by various independent ethnic groups, with defined geographical territory that exercised authority over their people. The society was generally a pre-capitalist, but the advent of colonialism fused these groups together and integrated Nigeria into the world capitalist system. Since colonialism did not need to create a capitalist state in Nigeria in order to obtain raw materials for British industries or control and protect the market for the metropolis, it introduced elements of capitalism but not capitalism. Colonialism as a logical extension of imperialism distorted the Nigerian economy, and    introduced    new    relations    of    production   and accumulation.
Worst still, the colonial economy was a racist economy. It was dominated by foreign capital and interest which controlled every sector of the economy. This act inhibited the process of capital accumulation by the Nigerian bourgeoisie during this period and restricted their involvement in the economy to the service sector as compradors. But the indigenous bourgeoisie were not content with this status as it impeded large scale capital accumulation. They therefore sought political power as a means of furthering their economic interests. This culminated in the struggle for independence. To this class the British ceded political power at independence while retaining economic power. Political independence only became possible because the existence of this class guaranteed that the substance of economic domination could continue despite the ceding of the political power (Ake, 1996). So lacking economic base, the Nigerian ruling class since independence is thrown back on what it has, political leverage. It has used political power to amass wealth through corruption in an attempt to consolidate its material base to the extent that political power is now the established way to wealth. Those who win state power through election or coup can have all the wealth they want even without working, while those who lose the struggle for state power cannot have security in the wealth they have made by hard work. The capture of the state power inevitably becomes a matter of life and death (Ake, 1996).
By way of summary, corruption and the attendant contradictions in Nigerian fiscal federalism and the non performing budgetary process could be seen as manifestations of the inherent contradictions in the struggle by dominant ‘power elites’ to consolidate their positions and expand their accumulation base. 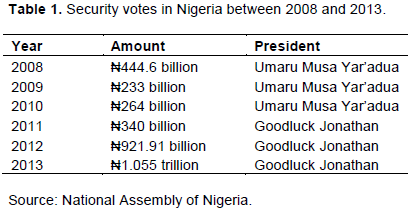 Nigeria has joined the league of countries that are known to spend a good chunk of their budgetary allocation on security. Nigeria ranks 57 in the global rating on military expenditure. It occupies the 7th position in Africa while it is regarded as the largest spender in the West African sub region. The ranking was based on Nigeria’s military expenditure in 2009 (Eme and Anyadike, 2013). Defense is a critical sector and has enjoyed favourable consideration in funding; yet, the Nigerian defense facilities are poor.  When we carefully consider the huge budget that yearly goes into the Nigerian defense sector, we would understand the need for more transparency and accountability. It is important to state that the key players in the Nigerian Defence industry comprise the President, who by virtue of occupying this position is also the Commander-in-Chief of the Armed Forces. Others are the Minister of Defence and the Defense Ministry, Chief of Defense staff, Chief of Army staff, Chief of Air staff and Chief of Naval staff. It is incomprehensible and disheartening that in spite of these huge budgetary allocations to defense and security, there is high incidence of insecurity across the country. This simply goes to show that the Defense or Security Votes are not properly implemented due to corruption.
Corruption is also perpetrated at the level of budget audit or oversight. This is the last segments in the budget circle. This is mainly undertaken by the Budget Office, Office of the Auditor General of the Federation and the Committees of the National Assembly. At this level, there is a lot of compromise especially from the Committees of the National Assembly. Most times, while exercising their functions, these committees receive bribe from erring or corrupt MDAs and contractors and refuse to expose such corruption. They only expose corruption where corrupt MDAs refuse to compromise. A good example is the case of Farouk Lawal and the subsidy scam in 2012. In January 2012, Farouk Lawan chaired the House of Representatives Committee that investigated the Nigerian government fuel subsidies scandal. The Committee’s report released in April of the same year revealed a huge scam in which Nigerian fuel companies were being paid hundreds of millions of dollars in subsidies by the government for fuel that was never delivered. The scam was estimated to cost the country $6.8 million dollars. In February, 2013, Farouk Lawan was charged with corruption after he allegedly accepted $500,000 dollars from Femi Otedola, a Nigerian billionaire tycoon as part of $3 million dollars bribe Lawan solicited from Femi Otedola (Vanguard, 2016). Femi Otedola claimed that Farouk Lawan demanded the bribe in order to have his companies, Zenon and Synopsis removed from the list of companies that the Committee had accused (Premium Times, 2017). The two companies were delisted during the house debate after the bribe had been received. Today, Senator Farouk Lawal is standing trial in court because of this scandal.

The paper reveals that political corruption has been present in Nigeria right from independence till date but minimal at the earlier stage statehood. Today, it has grown in size and magnitude and almost becoming uncontrollable. Also, it reveals that the entire budgetary process within the period under review was underlined by lack of transparency and accountability with attendant massive corruption. It further argues that the unparalleled corruption has led to consistent poor budgetary performance, mass poverty, poor infrastructural development, infrastructural decay and sub national political revolt as is demonstrated in the ethnic militias and insurgency. The paper concludes that the problem under consideration must be seen as the manifestations of the inherent contradictions in the struggle by the dominant power elites in Nigeria to consolidate their positions, put down challenges to their power and expand their accumulation base.

Arising from the above discourse, the following recommendations are advanced:
(i) The political elites must rise to the challenges of good governance, patriotism, nation building and development by making a conscious effort to fight against corruption at all levels in governance to save Nigeria from being a failed state.
(ii) The political economy must be restructured to break out from the present monocultural economy that depends on crude oil by diversification to open - up other sectors of the economy to reduce quest for political power to control the allocation of the oil revenue at the centre.
(iii) The Constitution should be restructured to give room for true federalism. The present Federal structure in which the sub-national units are politically and economically weak contradicts the principles of federalism. In the current Constitution of the Federal Republic of Nigeria as amended, the Federal Government controls 68 items in the Exclusive List and also dominates the States in Concurrent List which contains only 30 items of lower dimension. This has made the State Governments to depend absolutely on the Federal Government for monthly allocation of revenue which is not healthy for federalism. Indeed, this situation exists principally in fiscal centralism and not fiscal federalism.
(iv) The budgetary process at all levels should be made more transparent and the MDAs should be accountable. The budget of any MDA should not be passed until it shows that the performance of the previous budget is in line with the Appropriation Act. Also, the Appropriation Bill should be presented on time by the President, considered and passed on time by the National Assembly before the commencement of the fiscal year of operation is imperative. Towards achieving this, we recommend that a time limit for the presentation and passage of the budget (Appropriation Bill) be included in the current constitutional amendment.
(v) In order for the MDAs to take capital budget implementation seriously, there should be timely release of funds to them in order to plan and implement their programmes and projects.