Electoral institutions and management of elections in Nigeria and Ghana: A comparative assessment

Since the arrival of new democratic train in West Africa, elections have been characterized with naked violence and irregularities which have negatively manifested in economic underdevelopment and political instability. To this end, understanding the dominant nature and character of the electoral management bodies of Nigeria and Ghana to identify a body that is substantially functioning well is central to this paper. This study found a more stronger INEC in terms of electoral management comparing the previous elections with 2015 general elections, yet issues such as non-permanent position of her experienced principal officers, nature of funding, ineffective working relation with other stakeholders are still challenges. This paper discovered that a substantial level of autonomy, permanency in membership of Ghanaian Electoral Commission (EC), proper funding and a doctrine of Inter Party Advisory Committee significantly contributed to its electoral success; by extension democratic consolidation. This study was of the view that Nigeria stands to distinguish itself, if it meticulously adopts and adapts Ghana’s viable electoral model. 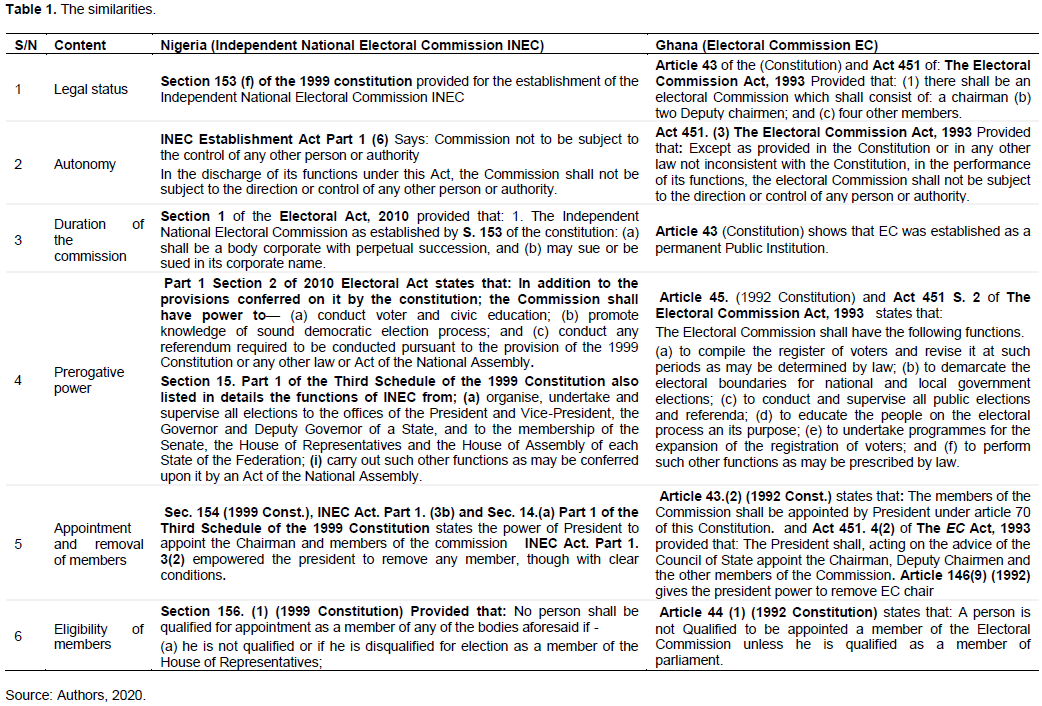 As opinions of scholars hardly differ over the adoption of elections as preferred mechanism of getting political power in the contemporary liberal democracies, it suggests that elections are crucial to competitive politics. By implications, virile electoral management bodies became quite imperative to achieve this onerous fundamental political goal. Unfortunately, over the years the missing credible elections in many West Africa democracies has raised a big question of viability on their electoral management bodies. Consequently however, huge losses both in human and materials senses have been recorded. In fact, the implication of violence, incredible elections manifested in its attendant socio-economic and political crises and by extension underdevelopment in this sub-region. Interestingly, Nigeria and Ghana shared similar political experience. Expectedly therefore were their electoral management bodies to have asserted themselves and conducted free, fair credible and widely acceptable elections. But, pockets of challenges including: substantial level of autonomy; tenure of the principal officers; nature of funding and inter party advisory council slightly drew a line between the effectiveness of Ghana’s EC and the Nigerian INEC.
One of the most important issues that demands attention is the independence of the Electoral Management bodies. The autonomy of the Commission does foster initiatives and decisive decision making. The internal arrangement in respect of the electoral process is free from possible interference from the electoral actors or other institutions. To strictly assign and allow electoral management bodies to perform their constitutional mandate would free them from undue interference from any quarters. The independence of electoral management body is essential to its performance.  In Ghana for instance, the EC internal audit service and contract verification service and its administrative expenses (salaries, benefits and pension) charged on the Consolidated Fund reduce the influence that may arise from other player(s) in electoral process and by extension strengthen its autonomy.  The recent assertion by the former INEC boss Jega as reported by Fabiyi (2015) that: “the only regret he has been his inability to create a special salary structure for the staff of the commission” is a clear indication that the commission has not enjoyed desired autonomy.
Also, the tenure of the electoral commission as well as its principal staff is very germane to its viability. In actual fact, permanency in membership of the Ghanaian Electoral Commission’s top officers has largely helped in consolidating on their achieved electoral objectives. Unlike in Nigeria where the position of INEC chairman is not permanent and of implication is lack of consolidation in terms of experience. Indeed, the tenure of INEC officers may considerably impact the stability and policy continuity and overall performance of the commission. Incessant change of leadership would not enable the commission to consolidate some reform initiatives. Permanent tenure for the chairman and other top members of the Ghana’s Electoral Commission is one of the ingredients that keep their electoral body desirably functioning. This factor is missing in Nigeria electoral model because of our five 5 years renewable tenure. Insight benefit and one of the major discoveries in this comparative study is that, Ghana’s electoral commission was able to make headway because of the accumulated experiences of its top electoral members. This was possible because they enjoy permanent position and became experts in election administration.
Conversely in Nigeria, the system does not have sitting doyens in election administration, owing to five year single tenure nature of our electoral law for the chairman of INEC. Nigeria could borrow a leaf from her neighbour and sustain the reformation strategies of the Jega led INEC. It must be added that, amendment should be made to the constitution to equate the service year of the INEC Chairman with that of the Court of Appeal as the case in Ghana. This would allow INEC boss to build on his experience and by extension expectedly deliver. Another thing Nigeria (INEC) should copy from Ghana’s model is the idea of effective Inter-Party Advisory Council IPAC. This study discovered that EC of Ghana does meet frequently (once in every month) and exchange views with the key players (political parties) who carry them along about the activity of the electoral process. In fact, it appears as if this framework is getting to the level of being institutionalized, as it turns a routine exercise. This is a good example worthy of emulation.
Finally, this study observed that attitude of stakeholders in the democratization project speaks volume about desirable good governance. This is noticed in Ghana, as the managers of election, political actors and the masses are committed to the country’s democratic project. This study is optimistic of a virile INEC considering the antecedent and pedigree of its new Chairman Prof. Yakub Mamood. Hence, all the stakeholders in election administration should see their  participation not as a mere activity, rather as an integral part of social life and our yearning for good life.