Malaria is a leading cause of morbidity and mortality in the world. In general, malaria is easily treated but in a subset of cases it develops to severe disease. Severe malaria has a high rate of mortality even with the best available care. This creates the need for intensive research to fully characterise the pathogenesis of the disease in order to create future novel therapies. One of the hallmarks of malaria infections is its ability to adhere to specific sites in the body leading to severe disease syndromes such as cerebral malaria and pregnancy associated malaria. In this review, the platelet-mediated clumping adhesion phenotypes of malaria-infected erythrocytes were discussed in the context of infected erythrocyte adhesion phenotypes such as cytoadhesion and rosetting. Platelet-mediated clumping refers to a phenomenon of P. falciparum-infected erythrocytes whereby they agglutinate to form large aggregates held together by activated platelets. This unique phenotype is important because it has been associated with severe malaria in both children and adults in diverse geographical and transmission settings. The precise mechanisms by which platelet-mediated clumping occurs are yet to be precisely described. The platelet receptors implicated in this phenotype include CD36, P-Selectin and gC1qR.  The parasite derived ligands that mediate this phenotype are yet to be described.

According to the WHO, 212 million people contracted malaria in 2015 whereby 90% of them happened in Africa (WHO, 2016). It is estimated that there were 429,000 malaria related deaths in 2015 a majority of whom were children under 5 years old. In general the scale up of malaria control programmes over the past decade has led to a decrease in malaria-related mortality and morbidity.
Malaria is caused by the protozoan parasite known as Plasmodium falciparum that is transmitted by female Anopheles mosquitoes during blood meals. The injected sporozoites travel from the site of infection on the skin to the liver where they infect hepatocytes. After appro-ximately 10 days of development and division in the hepatocytes merozoites are released into the blood stream   where   they    infect    erythrocytes.   Merozoitesdevelop through a 48 h cycle in the erythrocytes that ends in the release of more merozoites that re-infect fresh erythrocytes. This intra-erythrocytic parasite stage coincides with the symptomatic phase of malaria infections. The mature stage of the intra-erythrocytic parasite known as the trophozoite exports and inserts parasite-derived antigens into the erythrocyte plasma membrane modifying its flexibility and adhesive properties. This enables infected erythrocytes (IEs) to avoid splenic clearance by sequestering to tissues and organs through endothelial cell receptors in the microvasculature.
Malaria is in general an easily treated disease with antimalarial drugs. However,  in the absence of effective treatment, the infection develops to severe disease that is characterised by three syndromes namely: Impaired consciousness, respiratory distress, cerebral malaria and severe malaria anaemia (Marsh et al., 1995). The adhesive properties of mature IEs are thought to contribute to the pathogenesis of severe malaria by causing disturbed blood flow, leading to localized host inflammatory responses and deprived oxygen concentrations. This adhesion is thought to further lead to disruption of endothelial cell function and apoptosis

Platelet-mediated clumping refers  to  the  aggregation  of mature P. falciparum IEs in close contact with platelets (Pain et al., 2001). Apparent autoagglutination of IEs was initially reported in a laboratory parasite line IT/C10 and later in patient Kenyan patient isolates (Roberts et al., 2000; Roberts et al., 1992). Subsequent work on parasite line IT/C10 showed that this autoagglutination was mediated by platelets and that it is a common phenotype in patient isolates (Pain et al., 2001; Chotivanich et al., 2004).
Platelet-mediated clumping assay
The platelet-mediated clumping phenotype of a given parasite isolate is determined in vitro by counting the number of IEs in clumps as a proportion of the total number of IEs. A clump is defined as an aggregation of three or more IEs. The level of platelet-mediated clumping of isolates varies among parasites.
Platelet-mediated clumping is a specific adhesion phenotype that is characteristic of a subset of malaria parasites. Previous studies show that the clumping phenotype is sensitive to assay conditions (Arman and Rowe 2008; Arman et al., 2013). The platelet-mediated clumping assay attempts to measure a property of parasites that has not been showed to occur in vivo in clinical malaria, although platelet accumulation in malaria has been reported in the brain of children that died from cerebral malaria (Grau et al., 2003). It has been shown that CD36-binding IEs may bind to activated endothelia through vWf-decorated platelets as a bridge on surfaces that may otherwise lack CD36 (Bridges et al., 2010).  If the clumps of IEs observed in vitro in platelet-mediated clumping assays could form in vivo, it is plausible that they could obstruct of blood flow in post-capillary venules.
P. falciparum interaction with platelets might also lead to platelet activation and release of inflammatory mediators (Srivastava et al., 2008; McMorran et al., 2009; McMorran et al., 2012)however, the precise role of platelets in malaria pathology remains unclear. The assessment of P. falciparum clumping is affected by the precise conditions used to set up the clumping assay in vitro, with parasitaemia and haematocrit having a profound effect on the outcome of the assay. For field isolate studies, it is crucial that the effect of these parameters on clumping is taken into account during experimental design; otherwise the higher parasitaemia usually seen in parasite isolates from severe malaria patients compared to uncomplicated malaria controls could bias results. Possible solutions to the confounding effect of parasitaemia on studies of clumping and malaria severity include adjustment of all isolates to a standardized parasitaemia, or matching of cases and controls.  For laboratory experiments on clumping, it is important that the limitations of the assay (e. g. the difficulty in assessing the true maximum clumping frequency  of a parasite because of the formation of giant clumps that cannot be counted accurately) are taken into account. However, the assay conditions alone cannot explain the variable association of clumping with severe malaria in different studies, which requires further investigation using carefully designed experiments and standardized techniques. 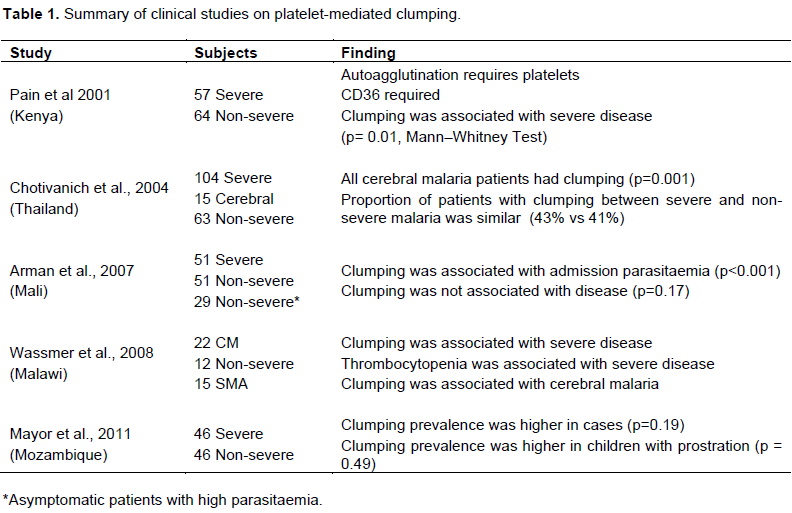 Platelet mediated clumping has been studied in both laboratory parasite lines and in field isolates as discussed previously and is thought to be important in the pathogenesis of severe disease in diverse clinical and geographical settings. Although not all studies thus far that investigated the platelet-mediated clumping phenotype  agrees  on  its  importance  and  relevance  in malaria pathogenesis. The dissenting results have been explained by the sensitivity of the clumping assay to experimental conditions and it has been noted that earlier studies were conducted under different experimental conditions. A further challenge was that the studies were conducted in a relatively small number of samples.