Trends in compensation for human-wildlife conflict losses in Kenya

Human-wildlife conflicts (HWC) can cause substantial losses. Compensation for such losses is essential to foster positive community attitudes toward wildlife conservation. Monetary compensation for the loss of human life, injury, crop and property damage, or livestock depredation by wildlife is a common strategy for mitigating HWC. We analyzed inter-specific, spatial, inter-annual and seasonal variation in human-wildlife conflicts, conflict outcome and the associated monetary costs of compensation in Kenya during 2007-2016. A total of 18,794 compensation claims were filed with the Kenya National Compensation Scheme (KNCS) during 2007 - 2016. Snakes made the greatest contribution to the total cases (44.8%,

= 266) of human deaths and over 75% of crop and property damage. Spotted hyena, leopard and lion caused 85% of livestock predation cases. The intensity and outcome of conflicts varied across counties such that most human fatalities occurred in arid Tana River and Wajir counties, whereas most human injuries occurred in Kitui and Wajir counties. The intensity of conflicts was strongly influenced by the agro-climatic potential and percentage of a county under protection, rainfall and temperature and their interactions. In consequence, crop damage was highest in counties with high agricultural potential (Meru and Taita Taveta) but livestock predation was highest in counties with large protected areas (Samburu and Taita Taveta). Human fatality and injury were higher among males than females and adults than children. Over the 10-year period, the Kenya Government spent about 3 billion Kenya shillings on compensation of about 30% of all filed claims. Compensation schemes require sustainable funding mechanisms and effective administration to minimize negative unintended consequences.

Study area
Kenya borders Somalia, Ethiopia, Sudan, Uganda, Tanzania, and the Indian Ocean in East Africa (Figure 1). It straddles the equator and lies between longitudes 33°50'E - 41°58' E and latitudes 5°2' N - 4°45' S and has a total area of 582,646 km2. Kenya's human population has grown exponentially from about 8 million people in 1962 to about 49 million people in 2017 (The World Bank, 2017) distributed across 47 administrative counties. Altitude ranges between 0 and 5199 m, the highest peak of Mount Kenya. Rainfall in Kenya is mostly bimodal with short rains occurring during November - December and the long rains during March-May (Ogutu et al., 2008). Kenya is divided into seven agro-climatic zones (I to VII), four (IV to VII) of which are hot, dry and receive little and often unreliable rains. The latter four zones have very limited agricultural potential, cover the largest percentage of Kenya (88%) and are often referred to as rangelands. The rangelands are inhabited predominantly by pastoral communities and harbour a wide variety of wildlife species that are adapted to the harsh climatic conditions (Pratt and Gwynne, 1977). Kenya has 63 protected areas, including 23 terrestrial national parks, 26 terrestrial national reserves, four marine national parks, six marine national reserves and four national sanctuaries that account for about 8% of Kenya’s total land surface area (Kanga et al., 2013). Most protected areas are not fenced and therefore wildlife move freely to human-dominated landscapes bringing them into frequent interaction with people and their livestock (Figure 1).
Processing human-wildlife conflict compensation data
The Kenya Wildlife Service (KWS) oversees all matters related to wildlife conservation and management in Kenya. Therefore, KWS maintains a national digital database of all compensation claims at its Headquarters in Nairobi since 2006. This database acts as a repository for all claims on compensation from different parts of the country (Figure 1) and provides timely information to the government. We sourced for and used the data for the 10 years covering 2007-2016. Noteworthy attributes of the compensation database include the date when the conflict incident occurred, the common English name of the wildlife species that caused the conflict, the type of conflict (human injury or death, damage to crops and other properties, livestock depredation), name of county where the conflict incident occurred, gender of the victim (male or female), age of the victim (adult - above 18 years or child - below 18 years), name of claimant (omitted from analysis for confidentiality considerations), whether a loss was compensated (yes or no), amount paid in Kenya shillings (Table 1), and the status of the claim (approved, not approved or pending). A claim may be pending or may not be approved due to a number of reasons, including lack of important documents, such as a national identity card of the claimant, missing or incomplete information; for example, the value of the damaged property for which compensation is claimed, or missing signature of the police officer or medical doctor who attended the case. 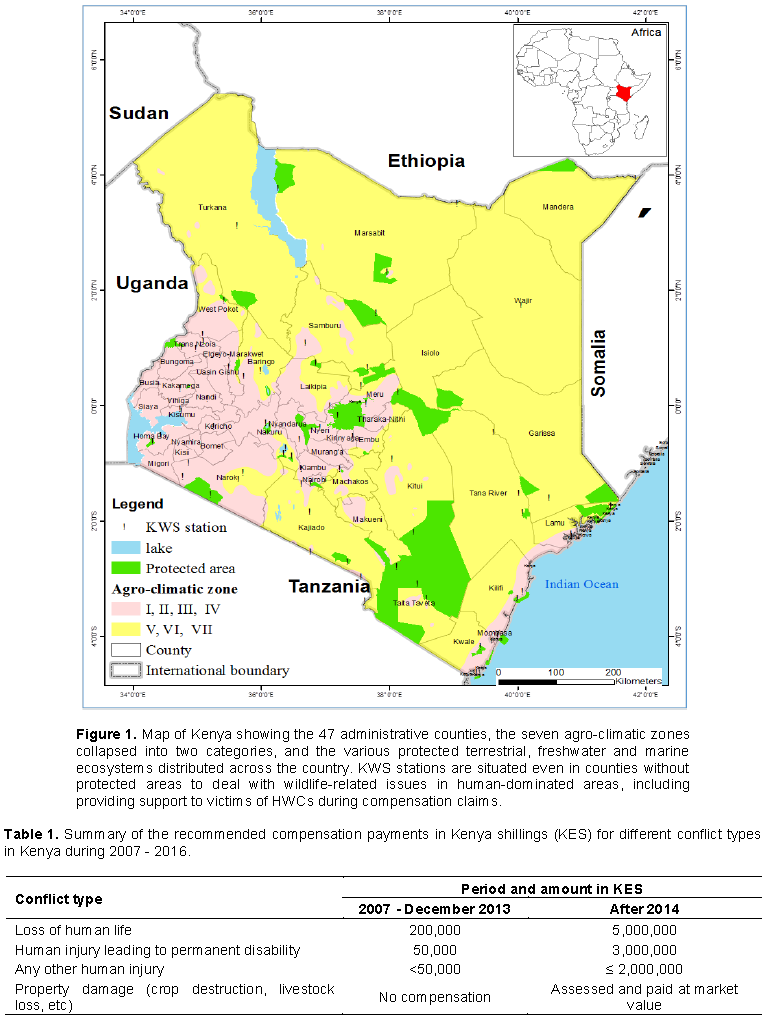 Annual and monthly variation in compensation claims in Kenya during 2007 - 2016
A total of 18,794 (1,879.4 ± 1720.1, range 529 - 5,020) compensation claims for losses caused by human-conflicts was filed for Kenya-wide during 2007 - 2016. Relative to 2012, the number of claims increased 1.8 fold in 2013, the year Kenya’s parliament passed the new Wildlife Conservation and Management Act 2013, and 5.8 fold to a peak in 2014, the year the new Act took effect. Thereafter, the number of claims declined from 2014 to 2016 (Figure 2). Snakes were the leading conflict species (44.8%) followed by the African elephant (Loxodonta africana, 22.3%). The next four leading conflict species were the spotted hyena (Crocuta crocuta, 6.5%), African buffalo (Syncerus caffer, 4.9%), leopard (Panthera pardus, 4.6%) and lion (Panther leo, 4.0%). Other notable species contributing to conflicts were the crocodile (Crocodylus niloticus, 3.5%), hippo  (Hippopotamus amphibius, 3.0%) and common zebra (Equus quagga, 2.5%). Overall, the frequency of conflicts differed between species and across the years ( = 5104.9,  = 0.001). Ten species caused at least 20 conflicts each year that resulted in compensation claims, and are the main focus of the subsequent sections, even though all the species were included in all the statistical tests (Table 2).
There was evident seasonality in conflicts but the nature of seasonality varied among species or species groups. In particular, conflicts caused by snakes peaked during the long (January-May) and short (November-December) wet seasons and were lowest during the long dry season between July-September. In contrast, the large herbivore conflicts peaked during the early dry season month of July. Conflicts caused by the three common carnivores followed a similar pattern to that for the herbivores (Figure 3).
Frequency of compensation claims by conflict type during 2007-2016
Human-wildlife conflicts resulted in five different types of reported outcomes during the 10 years (Table 3). Conflicts were seven times more likely to result in human injury (1011.1 ± 582.7) rather than death (142.4 ± 50.7). Crop destruction (1540.7 ± 376.2 SD) was nearly twice as likely to occur as livestock depredation events (870.3±233.1), and property damage (8.6 ± 3.1) was the least likely conflict type to occur in this period (Figure 4). The total number of conflict types varied significantly between years ( = 6104.4,  < 0.001). 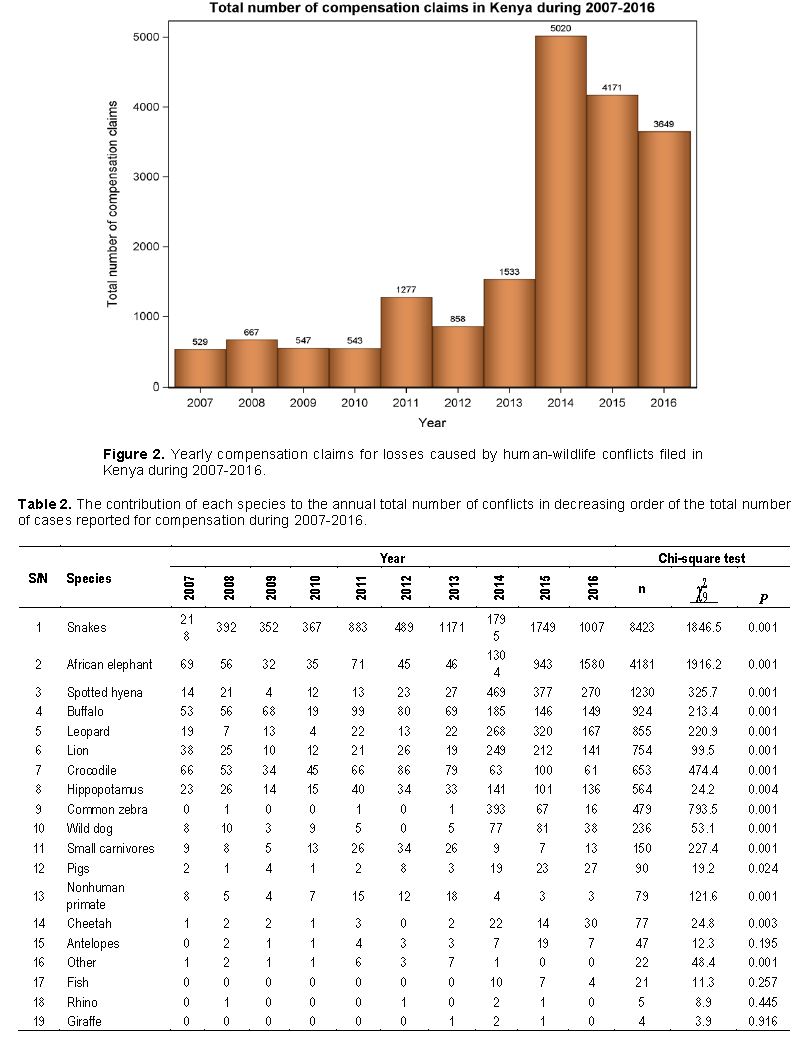 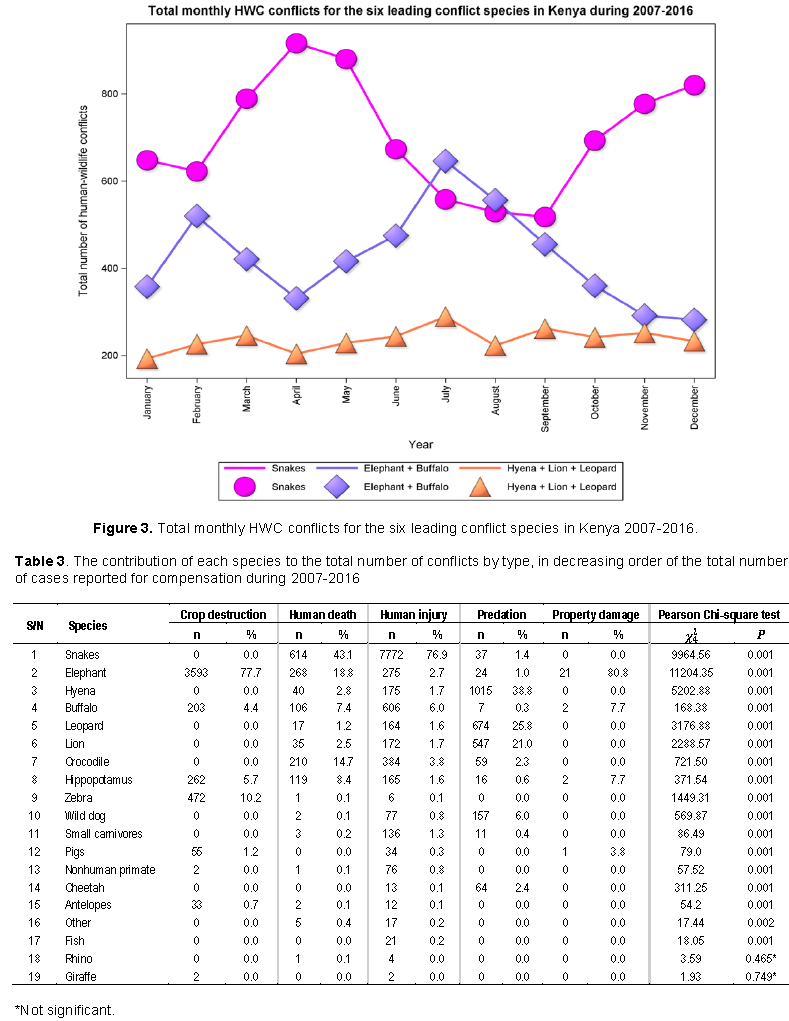 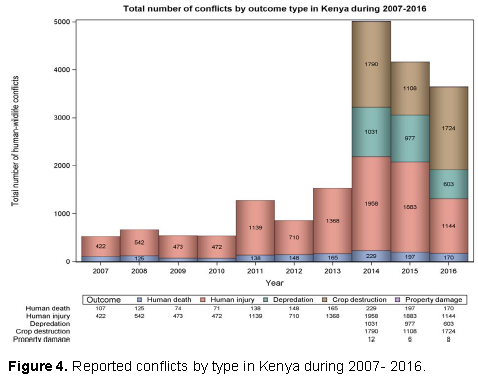 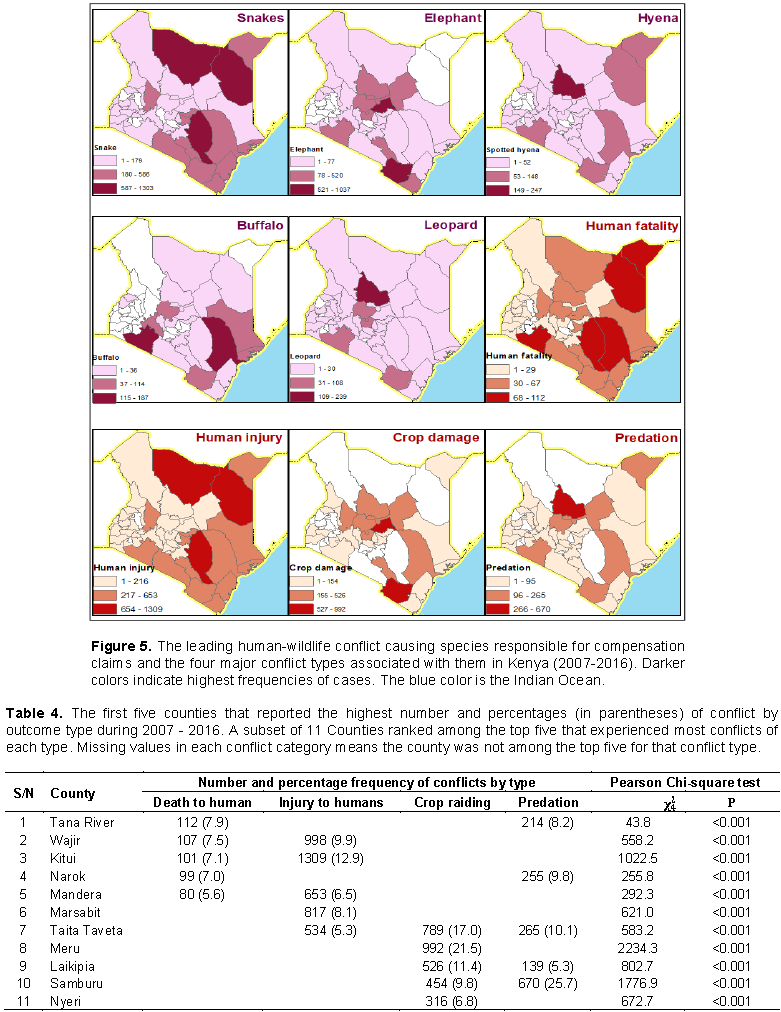 The authors thank KWS for permission to use the human-wildlife conflict compensation data. Moses Maloba who is in charge of the HWC Database at KWS HQ played a major role in making the data available to us. JOO was supported by a grant from the German Research Foundation (DFG, Grant No. OG 83/1-1). This project has received funding from the European Union’s Horizon 2020 research and innovation programme under Grant Agreement No. 641918 through the AfricanBioServices Project. Three anonymous reviewers provided suggestions and comments that helped greatly improve this paper.