The leopard (Panthera pardus) is a large carnivore species and listed as near threatened species by International Union for the Conservation of Nature (2002) due to its declining population (Henschel et al., 2008). The population of the common leopards In India, based on pugmark censuses has been reported to be 9,844 leopards in 2001 (Singh et al 2008).  The common leopard density reported to be 1.0–25.5 per 100 km2 in the Indian subcontinent (Ramesh, 2010). There are various factors thought to be responsible for this decline in population and is a great concern throughout the world. The direct conflict of leopards to human population is considered as major case of the declining in the population of the leopards in India (Mishra, 2001; Mishra et al., 2002). Depletion in population of the wild prey is also considered as one of the cause for decline in population of leopards (Karanth and Stith, 1999). Population of the various species of the free range wild animals decreases day by day. Trapping kills millions of targeted as well as non targeted species throughout the world): by using different types of the traps. Snare traps are wire trap used by some scientists to capture wild animals (Berchielli and Tullar, 1981; Englund, 1982; Skinner and Todd, 1990). These snare traps are used as neck, body gripper traps to capture canids also (Noonan, 2002; Goodrich et al., 2001; Logan et al., 1999; Onderka et al., 1990; McKinstry and Anderson, 1998). These traps are considered as the cause of mortality of free range wild animals and mortality has also been reported to be 84.74% in herbivores, 79.06% in carnivores by Vijay et al. (2012) from these traps.
The productivity of the female leopards starts in their earlier stage of their life and they starts producing offsprings in the age of 2 years while they stop producing at the age of 8.5 years (Bailey, 1993; Friedman and Case, 2002; Macaskill, 2009). They produce average of 2-3 offsprings on an average and their average period of gestation is 97-102 days.
In the world there little is known about the fetal deaths of female leopards. This work reports an investigation on the fetal deaths and also others causes correlated with the fetal deaths in the rescued free range leopards of the Shivalik Hillas areas of Himachal Pradesh in India. 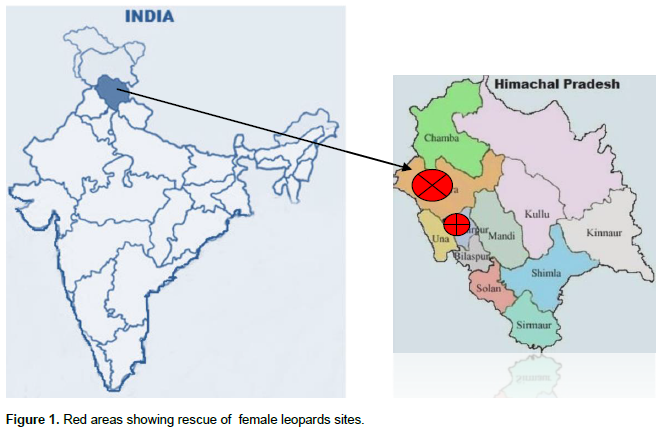 The present study was carried out on free range rescued female leopards who were trapped in the illegal trappings at various locations in Shivalik Hills and were rescued to Dhauladhar Nature Park Gopalpur in Himachal Pradesh in India.  We included mainly adult female leopards of age ranging from 2-10 years were studied. The age of animals were calculated on the basis of the previous studies (Stander, 1997). The study was carried out over a period of 5 years: from March 2010 to September 2014 during the rescue and rehabilitation of the free range wild animals in Himachal Pradesh in India.
The animals were rescued after proper darting with projectile gun with a dart of 3-5 ml capacity. The main anaesthesia used was Xylazine hydrochloride (100 mg/ml) (Troy’s Pty ltd Australia) at 1.5 mg/kgbwt and Ketamine hydrochloride (100 mg/ml) (Troy’s Pty ltd Australia) at 5-8 mg/kgbwt (Karabi et al., 2012). The trapped leopards were rescued by the rescue team of Dhauladhar Nature Park Gopalpur and after rescue the injured leopards were brought to Dhauladhar Nature Park Gopalpur and were treated for their injuries using standard protocol of surgical management of wounds. The status of the fetuses was observed only at the time of the necropsies of the female leopards. The necropsies were performed as per standard protocol of necropsies in leopards (Kurade et al 2012).

The present results provide the first record of the fetal deaths in the rescued free range leopards in Shivalik Hills in northern India. The leopards were rescued from the farm fields during the time of the their illegal trapping by the farmers or poachers.  Out of  12 female adult  rescued leopards, four female leopards could survived and others eight succumbed to trapping injuries as many of the trapped leopards were trapped in body gripped traps of the snares. The trapping injuries causes shock, dehyderation and poor physiological condition which are mainly considered as the etiology of the mortality of the trapped animals (Perrin, 1975; Gurnell, 1982). The study of the fetal deaths could be done the data from the rescued female leopard’s post mortem examination only is gotten. Most leopards were in their mid pregnancy stage in winters only as their breeding seasons also lies from December to February in India (Balme et al.,  2012). The maximum trapping that is  50%  were winter season as compared to other seasons; the reason  for this  more trapping in winter season in the Shivalik Hills areas could be because of the snow falls in higher areas which leads to shifting of the preys like barking deers, rabbits, porqupine and other small sized preys to plain areas of the Shivalik Hills of the Kangra and Hamirpur districts in Himachal Pradesh in India. The litter size was 1-3 in the present study which agrees with the previous studies conducted on the breeding of the leopards in the various parts of the world by various workers (Seidensticker et al., 1990; Owen et al., 2010; Balmeet al., 2009).
The death of all the fetuses in the uterus may be because these animals were trapped in the body gripper traps and tried to get escape by continuously puling their bodies in forward and backward positions: body gripper traps leads to crushing of the fetus due to continuous pressure of the snares in the body gripper traps. The cause of the deaths of the leopards trapped in the feet may be because of septicemia. The survivals of the cubs in free range were very less as noticed by various workers (37%, Balmeet al., 2012; 50%, Bailey, 2005; 53%, Owen et al., 2010).  There are little studies done on the fetal  deaths and this is thought to be influenced by various factors but mainly maternal age, intuitively, motherhood of older female leopards are the factors considered for the survival of the cubs in the free range (Pettorelli and Durant,  2007).
In the present study the fetus deaths were correlated with other factors like body gripper traps which is also considered as major cause of deaths of wild animals. Leopard (Panthera pardus) is an endangered  schedule – I wild animal under wildlife protection act 1972 and it’s illegal trapping need to be stopped immediately so that declining population of this species can be conserved at an early stage in the region of the Shivalik Hills areas of the Himachal Pradesh in India.

Author did not declare any conflict of interest.