A statistical study on higher educational institutions in India

This study aims to observe the increased effectiveness of Higher Educational Institutions in India and its competitiveness. It proposes to develop the interest in enhancing the quality in Educational Institutions. It is monitored and evaluated through rapid growth of information technology, which makes sophisticated data collection possible. This study aims to create an awareness or self competitiveness among educational institutions to implement the quality of standard education and needs of the society and to recognize the scale of height, which shows where we are in these globalised standards.

In this paper the statistical details of Higher Educational Institutions in India are discussed and gradual growth of various aspects is implied to create awareness in the educational sector. The main focus of this paper is to enhance and motivate the Higher Educational Institutions in India to develop the needs/ analyze the lack of growth and increased effectiveness yearly in various aspects. It is now well recognized that the growth of the global economy has increased opportunities for those countries with good levels of education and vice versa (Carnoy, 1999; Tilak, 2001; Stewart, 1996; Ilon, 1994).

With macro economic reforms resulting in severe cuts on the education budget, on the one hand, accomplishing the long cherished goal of universal elementary education on the other hand, the government directs the shift of resources from higher to primary education. It can be noticed from the approach of the Tenth Five-year Plan and Tenth plan document that, “Since budget resources are limited, and such resources as are available, need to be allocated to expanding primary education, it is important to recognize that the universities must make greater efforts to supplement resources from the government” (Government of India, 2001, 2002-2007). The resources from higher education are being diverted to the development of primary education. But it is stressed that while it is mandatory that the nation achieves universal elementary education and total literacy, it cannot at the same time afford to relegate to a neglected position to achieve global standards in higher education (UGC, 1993). Equity and social justice demand that newly emerging beneficiaries from the secondary education sector, who increasingly represent vulnerable groups are able to afford an access to higher education and eventually for an upward mobility (Punnayya Committee, 1993, p.18). Managing the present financial liabilities of the universities, especially the state universities, is in utter chaos. In the eighth plan itself financially self-supporting higher education has been advocated that of higher education in an equitable and cost-effective manner, in the process, making the higher education system financially self-supporting” (Government of India, 1992). The approach paper to the Ninth Five-year Plan says, “emphasis will be placed on consolidation and optimal utilization of the existing infrastructure through institutional networking …. and through open university system. Grants-in-aid will be linked to performance criteria to improve quality and inject accountability. Fees will be restructured on unit cost criteria and paying capacity of the beneficiaries. Additional resources will be generated by involving industry and commerce and through contribution from community” (Government of India, 1997, pp.82).

Objectives of the study

To observe the statistical details of Higher Educational Institutions in India and to create awareness on the educational sector.

To study and compare the growth and development in various aspects of Higher Educational Institutions in India.

While examining the finances of universities in India in the post reform period, Tilak and Rani (2002) found that in the decade 1990, in a sample of around 40 universities, there have been modest to steep increases in students’ fees of various types such as, tuition fees, examination fees, admission fees, registration fees, entrance examination, hostel and miscellaneous services, like application forms, brochures, and so on. Government grants to the universities have declined or remained stagnant in real prices, and sometimes even in current prices.

Cost recovery measures, particularly hike in fees, are increasingly resorted to in several universities. Majority of the universities (as many as 20 universities) have already increased their fee, which covered more than 20 per cent of their recurring income. The share of fee income in recurring expenditures of the universities was on the rise and reached up to 22 per cent of recurring cost in the year1998-99. This indicates that the fees are already higher, nearing various committees’ recommendations. However, it should be borne in mind that resources that can be raised through fees can be at a maximum level of 15 to 25 per cent on an average of the recurring expenditure over a period of next ten years (UGC, 1993; 2000).

Descriptive method is used in this study. Quantitative analysis is done using the data; information flow was collected through survey method from various sources of information published from higher education proceedings.

This is presented in Figure 1. 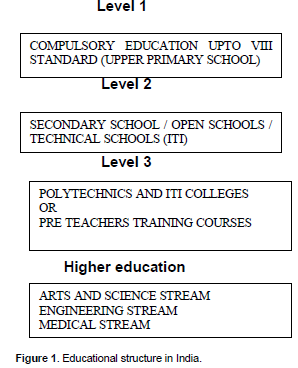 The following statistical details are discussed in this paper.

Number of enrolment of students and staff

Only universities and university level institutions are conferred with the power to award degrees. Universities are basically of two types –Unitary and Affiliating. Unitary universities are confined to teaching and research in their own departments. An affiliating university will have a central campus with departments or schools that impart post graduate instructions and conduct research. It would also have various affiliated colleges.

5. Institutes of national level importance and other university level institutions which include Institutions established by an Act of Parliament and declared as Institutions and also an institution established or incorporated by a State Legislative Act and through State Central Act (Tables 1-2). 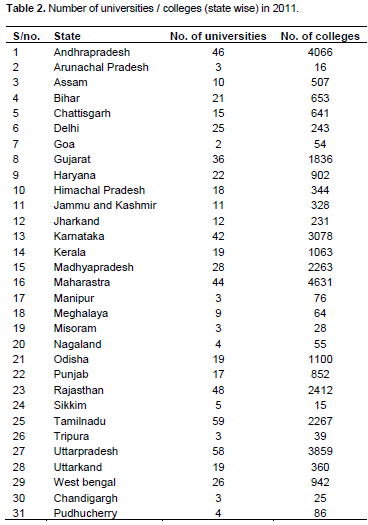 By observing and analyzing this statistical data it is useful to conclude and compare year wise growth and development and also to establish scientific standard techniques for improving or enhancing the quality of Higher Educational Institutions in India. Eighty six percent of the total enrolment in higher education is under graduate and 12 percent is post graduate education. Only 0.81% of the total enrolment is research and the remaining concerns diploma and other courses. In 2011, General Higher Education including undergraduate, post graduate and research education statistically shows a higher increase in quantity. 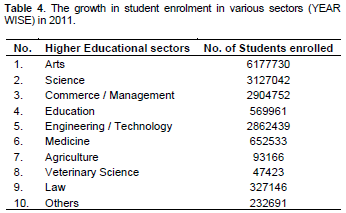 The quality of educational experiences offered, and problems associated with the affiliating functions of universities have changed in stakeholders’ expectations which offers explosion of knowledge. Development in science and technology has resulted in the need for skilled personnel for different kinds of jobs and has dictated the development of newer skills among the workforce. Apart from the university / college system, the private sector has also responded quickly to these demands. Growth in numbers is also reflected in students’ enrolment, faculty involved and the number of programmes offered as given in Tables 4 and 5.

Due to increase in growth of students’ enrollment, quality of education is a remarkable need which has to be concentrated. During the past 20 years, the number of colleges has already increased in multiples and it is observed that another 10 years the ratio of colleges versus students’ enrollment will be obviously competent. This will result in many institutions having growth in number of students enrolled in lieu of population of the country. It is very much important to provide quality of standards in infrastructure and other learning policies Students’ enrollment should be based on the Infra-structural resources of the institution so that the quality of education may not be compromised.  In    developed countries, higher education is influenced by commercialization without improving the necessary quality inputs both in academic and administrative. Higher education policies should provide more resources to focus on quality. Quality of service given to students in terms of teaching learning process should be valuable with fullest satisfaction by the qualified faculty. Public and Private Institutions should be ready to grant fund to facilitate the staff and students in terms of general  amenities and laboratory facilities and as well as research.

The Indian system of higher education is the second largest in the world. With this growth in size, the explosion of knowledge and information technology has led to micro specialization and a host of new inter-disciplinary and multi disciplinary areas. Hundreds of course combinations have evolved.  Higher education has increased in all levels connected to job preferences. National and International educational policy should create best quality assurance systems. It is essential to determine the responsibilities of authorities and management of the Educational Institutions to maintain the standards and quality education. University level education is becoming both local and global. The political decision makers and government should reveal the higher education expectations with a focus on the quality of objectives of education.

Learning environment should be improved to the requirements of modern media and also the Higher education department should provide favourable financial resources to follow updated teaching methods and also to restructure Modern infrastructural needs. The efficiency and the activities of the steering system must be monitored so that quality of best education is provided.

Facilitating more academic autonomy that would enable potential institutions to be more creative and innovative. Facilitating infrastructural needs and updating the expectation level of students by enhancing quality and standards to meet global competition of higher education.