Erosion of autonomy: The pitfall of educational management in Nigeria universities

This study examined the concept of autonomy and its effect on the management of universities in Nigeria. Four major dimensions of university autonomy were investigated. An instrument titled Erosion of University Autonomy Questionnaire (EUAQ) was used to collect data. The instrument was administered for four universities. The study employed a descriptive research of the survey type. The data collected ware subjected to frequency counts, percentages and correlation matrix for analysis. The instrument used was subjected to thorough screening by experts in educational management and tests, and measurements. Both face and content validity of the instrument was ascertained by its appropriateness in measuring what it was supposed to measure. Results showed that the levels of autonomy in the four dimensions were high and there was significant relationship between the four dimensions of autonomy (organization, financial, staffing and academic autonomy and management of the universities). Recommendations were made that if the university autonomy is preserved, it will instill confidence in the Vice Chancellors, and management to act; moreover, it will promote a high sense of meaning, competence and commitment among the staff and management. This will enhance the ability to be resourceful, innovative, improve productivity and the use of initiative by both the management and workers. In addition, brain drain, turnover and conflict in the universities will be at its low ebb.

The survey type is a descriptive research. The population consisted of all the lecturers in south west universities in Nigeria. The sample consisted of 120 lecturers selected from four universities, two federal and two state universities with 30 respondents from each. Stratified sampling technique was used to select the sample. The instrument used for data collection was a questionnaire titled ‘Erosion of University Autonomy (EUAQ)’. Face and content validity procedures were ascertained by experts and the reliability of the instrument was estimated using Cronbach alpha. A reliability coefficient of 0.92 was obtained. Hence, the instrument was considered reliable enough for the study. 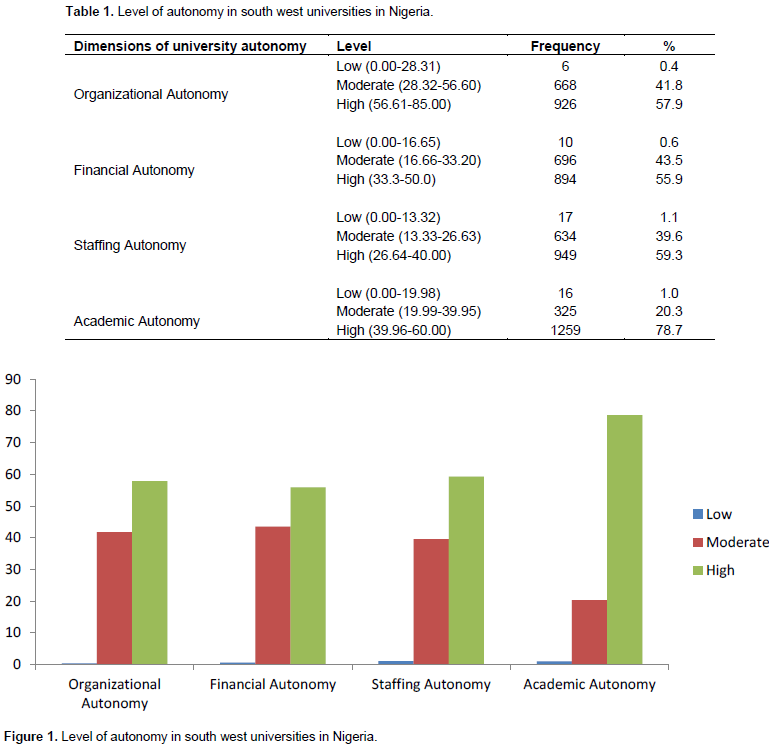