Comparison of Lagostomus maximus amelogenin gene (AMELX) with other mammals

The aim of this study was to compare the Lagostomus maximus AMEL sequence to assess their similarity with the AMEL genes from other mammals. Previously, a sequence of the AMEL gene of L. maximus which corresponds to the intron 3 of the human sequence for AMELX (AMEL on the X chromosome) was reported. The comparisons made, by the use of the algorithm provided by the NCBI (Basic Local Alignment Search Tool: BLAST) allowed the determination of the possible similitude between the sequence corresponding to the AMEL gene of some species of mammals with the AMEL sequence of L. maximus. The reported sequences for this gene should be studied further.

The Lagostomus maximus is a wild rodent whose females have a different ovary from the rest of the mammals with a high ovulation rate caused by the down regulation of the apoptotic pathway (Jensen et al., 2008).

Amelogenin is the major protein in tooth enamel (Delgado et al., 2005). The amelogenin gene, functional in Eutherians and Marsupials, is located in a pseudoautosomal ancient boundary (PAB) of the X and Y chromosomes where recombination is prevented. The importance and evolutionary meaning of AMEL gene was reported by Toyosawa et al. (1998), Iwase et al. (2003) and Wang et al. (2012) among others. The AMEL sequence is useful as sex determining method in forensic and anthropological sciences because the human AMELX(AMEL on the X chromosome) is shorter than the human AMELX gives a 106 base pairs amplification product while AMELY gives a 112 base pairs amplicon. The difference is due to a deletion of 6 bases in intron 1 of AMELX. Human males DNA (XY) show two bands on an electrophoresis agarose gel while human females (XX) show only one band. Thus, by PCR sex determination is possible with small samples of anthropological remains. This method is also used for sex determination in cetacean and artiodactyla (Macé and Crouau-Roy, 2008) as well as for bovids (Chen et al., 1999; Tsai et al., 2011). Detailed information about the size of PCR products generated on the X- and Y-homolo-gues can be found in Haas-Rochholz and Weiler (1997).

The materials and methods were described in an earlier work (Fernández Feijóo et al., 2010). Briefly, genomic DNA from a male L. maximus was the template for PCR amplification of the AMEL genomic region. The primers sequence for the PCR assays was identical to the sequence of codons from the 3´end of the human AMELX and AMELY (primer forward: AGCTACCACCTCATCCT, 17 bases and primer reverse: TGCCCTATCATGGAGCCT, 18 bases). A previously reported sequence of the AMEL gene of L. maximus (which corresponds to the intron 3 of the human sequence for AMELX) (Fernández Feijóo et al., 2010) was compared with sixteen sequences of the AMEL gene reported for fourteen species from five taxonomic groups of mammals (Primates, Rodentia, Artiodactyla, Perissodactyla and Carnivora). The comparisons were done using the BLAST algorhitm (Altschul et al., 1990).

Sequences corresponding to the AMEL gene, which are in the Nucleotide Database from the National Center for Biotechnology Information (NCBI on line library), were used for comparisons. Sequences, belonging to Cavia porcellus and Peromyscus maniculatus bairdii did not show any similarity with the Lagostomus maximus’ intron 3 sequence. The other sequences, belonging to humans (Homo sapiens), chimpanzees (Pan troglodytes), rhesus macaque (Macaca mulata), squirrel monkey (Saimiri boliviensis), hamster (Cricetulus griseus), mice (Mus musculus), rats (Rattus norvegicus), azara's grass mouse (Akodon azarae), cows (Bos taurus), pigs (Sus scrofa), horse (Equus ferus caballus) and dogs (Canis lupus), showed a similarity ranging from 70 to 92% with the L. maximus’ intron 3 amelogenin gene. The comparisons were made by using BLAST algorithm (available on line at   http://blast.ncbi.nlm.nih.gov/Blast.cgi)    between   the sequence (207 nucleotides) from L. maximus and the nucleotide database for the amelogenin gene from the species shown in Table 1. 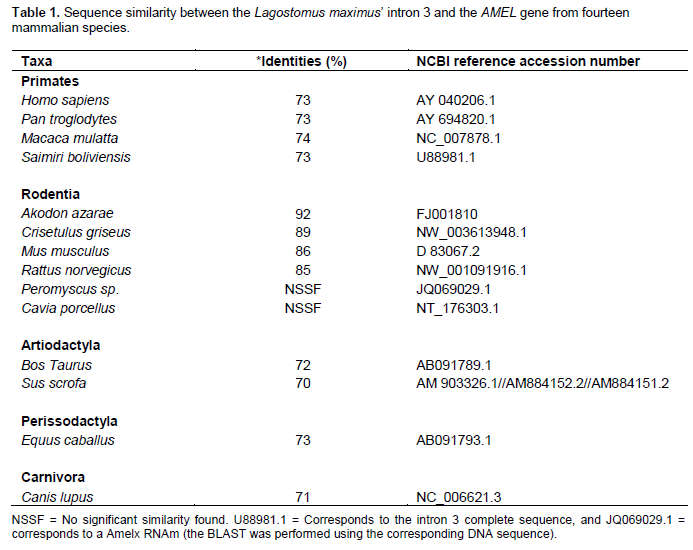 The similarity between the Lagostomus maximus´ intron 3 and the AMEL gene sequence from fourteen species ranged from 70 to 92%. This fact indicates the presence of AMEL, sequences with high similarity, between Primates, Rodentia, Artiodactyla, Perissodactyla and Carnivora. Interestingly, the highest similarity was found between the intron 3 from Akodon azarae and the intron 3 from Lagostomus maximus (92%). This may be explained by the technique employed, both sequences (from Akodon sp. and Lagostomus sp.) were obtained with the same experimental conditions. The Amel gene (Amelogenin) it is an important genomic region. Amelx is being studied in Mesocricetus auratus: The golden hamster (GeneBanK). The complete sequencing of the Lagostomus maximus AMEL gene should be performed to determine if it can be used as tool for sex determination as is done with the human AMEL.

The materials and biological samples provided by Maimonides University is gratefully acknowledged. The preparation of this manuscript was supported by CONICET and School of Agriculture, University of Buenos Aires, Argentina.

The animals were treated according to the guidelines from the Canadian Council on Animal Care. The protocol involving animals was reviewed and authorised by the Institutional Committee on the Use and Care of Experimental Animals (CICUAE, Universidad Maimonides).