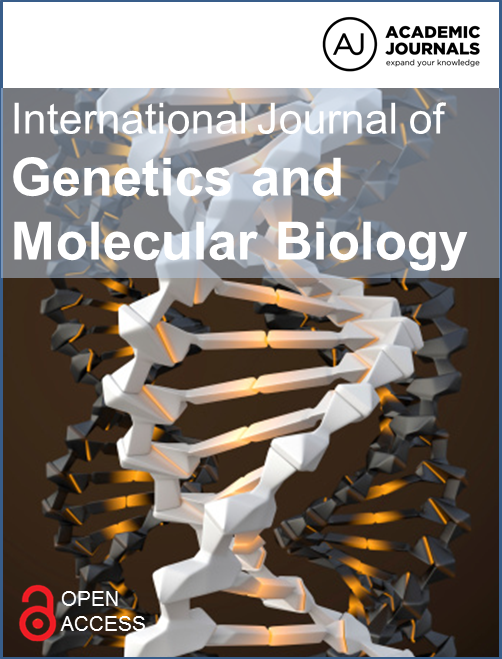 Vesicular monoamine transporters (VMATs) are an important target for biological research in neuropsychiatric disorders. Recent studies indicated that VMAT1 is expressed in the brain, thus making transporter plausible candidate genes for neuropsychiatric disorders. Furthermore, several recent genetic case-control studies have documented an association between common missense variations in the VMAT1 gene and susceptibility to bipolar disorder and schizophrenia. Until now, there are no reports of VMAT 1 allele frequencies in Emirati population. Hence, the aim of the present work was to study VMAT1 genetic polymorphism in Healthy Emirati population. Saliva samples were collected from 248 healthy Emiratis and genotyping was done for rs2270641 by PCR-RFLP, and rs2270637 and rs1390938 by Taqman assay. The minor allele frequencies of rs2270641, rs2270637 and rs1390938 were 0.48, 0.20 and 0.18, respectively, which were compared with that of available HapMap population data. In conclusion, the present study is first of its kind in Emirati population that established the allele and genotype frequency for various VMAT1 alleles which can be exploited to design future studies on the genetic association of neuropsychiatry disorders.

Vesicular monoamine transporters (VMATs) are found on the membrane of catecholamine storage vesicle, where they function to transport monoamines such as dopamine, serotonin, adrenaline and noradrenaline from the cytoplasm into the vesicles (Liu and Edwards, 1997). There are two structurally related but pharmacologically distinct  isoforms  of VMATs   in   humans   encoded   by separate genes, VMAT1 (SLC18A1) located on chromosome 8p21 and VMAT2 VMATs in humans encoded by separate genes, VMAT1 (SLC18A1) located on chromosome 8p21 and VMAT2(SLC18A2) on chromosome 10q25 (Peter et al., 1993). Animal studies reported a distinct distribution pattern of the two isoforms and  differences  of  expression  levels  between  species (Peter et al., 1993; Erickson et al., 1996). It was thought initially that VMAT1 is expressed exclusively in neurons of the peripheral nervous system, endocrine tissue, and chromaffin cells, while only the VMAT2 isoform was thought to be expressed in the brain (Peter et al., 1993; Erickson et al., 1996; Eidenet al., 2004). However, later studies showed that VMAT1 is expressed in rat brain (Hansson et al., 1998) and human brain (Lohoff et al., 2006) as well. Since then various in-vitro and in-vivo studies demonstrated that VMAT1 is an important candidate for biological research in psychiatric disorders and genetic variants of VMAT1 were found associated with schizophrenia, bipolar disorders, anxiety and depression (Lohoff et al., 2008a, b; Berrettini, 2003).VMAT1 polymorphisms also influence monoamine signaling, the functional response of emotional brain circuits, and risk for psychopathology (Lohoff et al., 2014).
Non-synonymous polymorphisms of the VMAT1 gene in silico based on the NCBI dbSNP database was searched for and 3 well-validated SNPs with a heterozygosity value of > 0.10 was found. They were rs2270641 (SNP1, 277C > A, Pro4Thr) in exon 2, rs2270637 (SNP2, 560C > G, Thr98Ser) and rs1390938 (SNP3, 674C > T, Thr136Ile) in exon 3. In the present study, genotyping was performed for these 3 alleles in SLC18A1 gene of neuropsychiatric relevance, and their frequencies in a sample of Emirati healthy subjects reported.

Bioinformatics analysis of candidate genes
SLC18A1 gene was screened in silico for the presence of SNPs rs2270641, rs2270641 and rs1390938 using the BioMart tool (Haider et al., 2009) and allele and genotype frequencies were obtained for HapMap populations for comparisons with Emirati population.
Subjects and sample collection
This study was conducted on two hundred and fifty (n=250) unrelated healthy Emiratis with no personal history of neuropsychiatric disorders. There were 75% male with mean age 33 and 25% females with mean age of 30 years. All the participants were asked to sign an informed consent and deliver 1 ml of saliva into an Oragene kit OGR-500 (DNA Genotek, Ottwa, Canada) for DNA extraction. The genomic DNA was extracted from saliva using prepITTM•L2P (DNA Genotek, Ottwa, Canada) in accordance with the manufacturer’s instructions. This study was approved by the institutional ethical committee of Sharjah University, UAE and was conducted according to the Helsinki Declaration.
PCR-RFLP based genotyping for rs2270641(Thr4Pro)
Rs270641 is due to G>T substitution in exon 2 of SLC18A1 which creates a BseAI recognition site. The forward primer 5’-GAA CAG TGA TAC AGA CAT GG-3’ and  Reverse  Primer  5’-TCA CTG TTG
AAC TCA AGC AG-3’ reported  by Lohoff et al. (2010) amplified a fragment of 420 bp. The PCR was done in 25 μL reaction mixture that contained 12.5 μL of AmpliTaq Gold® 360 PCR master mix (Applied Biosystems, Foster City, CA, USA),2μL (50-100 ng) of DNA, 2.5 μL(1 μM) of each forward and reverse primers, and 5.5 μL of nuclease free water. All conventional PCR assays were carried out in Veriti96-well thermal cyclers (Applied Biosystems, Foster City, CA, USA)  using amplification conditions consisting of 1 cycle of initial denaturation at 95°C for 5 min followed by 40 cycles of 95°C for 45 s, 54°C for 45 s, and 72°C for 45 s.
The amplified 420 bp PCR product was digested with Bse A1 restriction endonuclease in a 20 μL reaction mixture consisting of 2 μL of 10X buffer, 1 μL (10 U) of enzyme and 6 μL of PCR product and incubated overnight at 37°C.DNA fragments were separated in a 2.5% agarose gel, stained with ethidium bromide and visualized on a UV trans- illuminator.
TaqMan assay based genotyping for rs2270637 and rs1390938
The DNA samples collected were analyzed for rs2270637 (C>G) and rs1390938 (A>G) using a specific TaqMan SNP Genotyping Assay (Applied Biosystems, Foster City, CA, USA). These assays use florigenic probes in a 5’ nuclease assay to identify differences in DNA sequences. The laboratory pre-designed probes were obtained from Applied Biosystems. The reaction mixtures were consisting of 1 X TaqMan® Genotyping Master Mix (Applied Biosystems), 1 X of TaqMan Pre-Designed SNP Genotyping Assay [C__2716008_1 (rs2270637)and C__8804621_1 (rs1390938) Applied Biosystems] and water in a total volume of 10 μl. The amplification protocol consisted of 95°C for 20 s to activate DNA polymerase, followed by 40 cycles of 95°C for 20 s and 60°C for 30 s. All PCRs were performed and end point fluorescence readings were obtained on a QuantStudio® 3 Real-Time PCR (AppliedBiosystems). Upon running 5% samples in duplicate, the genotyping success rates were found to be 99.9% for both SNPs. Negative control was used in each run for quality control purposes.
Statistical analysis
Allele frequencies, genotype frequencies and carriage rates of the alleles in all the groups were compared by using Fisher’s exact test. The Hardy-Weinberg equilibrium at individual loci was assessed by χ2 statistics using the De Finetti program (http://ihg.gsf.de/cgi-bin/hw/hwa1.pl), and clinical association was calculated by paired t test. All P values were two sided, and differences were considered statistically significant for P< 0.05. Allele frequency was calculated as the number of occurrences of the test allele in the population divided by the total number of alleles studied.

The VMAT1 alleles as well as genotype frequencies in the studied Emirati population are summarized in Table 1. The frequencies of the genotypes of VMAT 1 alleles were in the Hardy-Weinberg equilibrium (p>0.05).

The gene encoding VMAT1 is located on chromosome 8p21, a region implicated in linkage studies of schizophrenia, bipolar disorder, and anxiety-related phenotypes. The VMAT1 transporter has gained recent attention in the field of neuropsychiatric research. This is based on the discovery that VMAT1 is in fact brain expressed and furthermore, that genetic variants of VMAT1 are associated with several psychiatric phenotypes (Lohoff, et al., 2008a, b; Berrettini, 2003). In vitro studies reported that lithium and valproate, the effective pharmacotherapies for BPD, increase the expression of VMAT1 (Cordeiro et al., 2000, 2002, 2004), suggesting that the VMAT1  gene  might  be  a  target  for therapeutic drug action. Several genetic case-control studies have documented an association between common missense variations in the VMAT1 gene and susceptibility to bipolar disorder and schizophrenia. Variations in the VMAT1 gene might affect transporter function and might be involved in the etiology of neuropsychiatric disorders. Previously, the three non-synonymous SNPs [Thr4Pro (rs2270641), Thr98Ser (rs2270637),Thr136Ile (rs1390938)] were reported to be associated with psychiatric disorders(Lohoff et al., 2008a, b; Bly, 2005; Richards et al., 2006; Chen et al., 2007)
The amino acid variant Thr136Ile in the VMAT1 gene was found associated with bipolar disorder in a case control association study conducted by Lohoff et al. (2006). The Thr4Pro polymorphism was associated with SZ in Europeans (Bly, 2005) and Chinese (Chen et al., 2007). This association was not observed in Japanese, but the study provided evidence for an association of the Thr98Ser polymorphism in this population (Richards et al., 2006). Lohoff et al. (2008a) provided further evidence for an association between the Thr4Pro polymorphisms in the SLC18A1 gene and SZ. Although, there are no data available on the activity of Thr4Pro, Thr98Ser, and Thr136Ile alleles to correlate the biological effect of these polymorphisms with neuropsychiatry conditions but indirect evidences suggest that transporters encoded by variant VMAT1 alleles may lead to an affected serotonergic neurotransmission. The Thr136Ile polymorphism is located in the first luminal domain of the transporter which interacts with inhibitors and substrates (Sievert and Ruoho, 1997) and mediates G-protein-dependentregulation of transmitter uptake (Brunk et al., 2006).  Hence, variants may results in a marked decrease in serotonin transport capacity (Brunk et al., 2006). In-vitro studies also confirmed a reduced transport activity due to presence of 136Thr allele (Khalifa et al., 2012). Subtle variation in the protein could thus affect serotonin and norepinephrine levels, consistent with the “serotoninhypothesis” of neuropsychiatric disorders (Senkowski  et  al.,  2003;  Charney  and  Deutch,   1996;  Handley, 1995).
In the present study, the Emirati population for these VMAT 1 SNPs was genotyped and the genotype and allele frequencies reported. This population largely genetically unexplored with respect to molecular genetics of neuropsychiatry disorders. MAFs were compared and found in the Emirati population with available data for samples from European, African, Asian and Latin American populations (extracted from HapMap) (Table 2). For rs 2270641, T allele was observed as the minor allele with an allele frequency of 0.480 in Emirati population whilst this allele was found to be major allele in all the Hapmap population (Table 2). However, Lohoff et al. (2006) reported T allele as the minor allele with a frequency of 0.35 in a European population but significantly different from Emirati population. For rs2270637, minor G allele frequency in Emirati population was not significantly different from that of the other populations on the HapMap data. In case of rs 1390938, the ASW sample was the only population with non-significant differences in the MAFs in comparison with Emirati population. For all other populations the MAFs were similar to Emirati population. 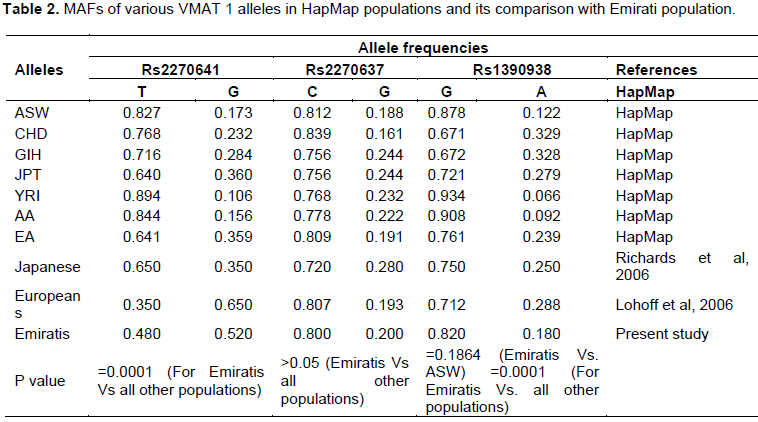 In summary, in this report, for the first time, the frequency of three major VMAT1 mutant alleles present in an Emirati population was determined, which can be exploited to design future studies on the genetic association of neuropsychiatry disorders.