Prostate cancer is a significant disease in men, and a large number of individuals would benefit if risk factors that increase the susceptibility to develop prostate cancer could be established, which could aid in the early detection of the disease which is crucial for successful treatment. The first objective of this study was detection of allele frequencies of 12 Y-chromosome short tandem repeat loci from Iraqian prostate cancer patients and normal control males. The second objective was to evaluate the importance of these loci to develop prostate cancer. Blood samples were collected from 70 patients unrelated males living in middle and south of Iraq. FTA® Technology was utilized to extract DNA from blood collected on FTA™ paper. Post PCR amplification was detected by using ABI Prism1 3130xl Genetic Analyzer 16-capillary array system, with POP-7™ Polymer and Data Collection Software, Genemapper version 3.5 software. A higher incidence of disease was found among males who had either allele 10 of DYS391 or allele 9 of DYS459. It is likely that Iraqi males who belong to Y-lineages with either allele 10 or allele 9 are more susceptible to develop prostate cancer, while those belonging to lineages with allele 17 of DYS456 and DYS19 are more resistant to the disease. This study shows the influence of genetic elements on prostate cancer, and it seems that DYS391 and DYS459 locus comprising with other loci have the potential to be used as a screening method for prediction of susceptibility to prostate cancer in Iraqi population.
Key words: DYS459, DYS391, DYS388, DYS19, high allelic frequency, prostate cancer, STR DNA typing.

Prostate cancer is a significant disease in men accounting for approximately 33% of all male cancers and having a 9% mortality rate for men presenting with disease (Jemal et al., 2006). However, public aware-ness for of prostate cancer is relatively law. Two classifications are used to describe prostate cancer. The Union International Contra Cancer (UICC) 2002 tumour, node, metastasis (TNM) classification is a common classification used for malignant tumours (Hayes et al., 2005). The second classification system, Gleason score, is specific for grading of adeno-carcinoma of the prostate (Gleason and Mellinger, 1974). A large number of individuals would benefit if risk factors that increase the susceptibility to develop prostate cancer could be established, which could aid in the early detection of the disease which is crucial for successful treatment (Paracchini et al., 2003; Ewis et al., 2006).
Microsatellites are a group of molecular markers chosen for a number of purposes including forensics individual identification and relatedness testing poly-morphic (Kimpton et al., 1996; Gill et al., 2001; Andrea et al., 2008; Imad et al., 2015). There is a high genomic abundance of random distribution throughout the genome. There is also an abundance of polymorphism (Ellegren et al., 2004; Butler and Hill, 2012). The Y-chromosome is specific to the male portion of a male-female DNA mixed such as is common in sexual assault cases. These STRs can also be useful in missing persons investigations, historical investigations, some paternity testing scenarios, and genetic genealogy (Carolina et al., 2010). Although they are often used to suggest which haplogroup an individual matches, STR analysis typically provides a person haplotype. Most tests on the Y chromosome examine between 12 and 67 STR markers (Carolina et al., 2010). The Y chromosome is less variable than the other chromosomes. Many markers are thus needed to obtain a high degree of discrimination between unrelated male markers (Muhanned et al., 2015).
Numerous studies have been conducted on the molecular genetic aetiology of the disease. The incidence of prostate cancer varies considerably between people of various ethnicities (Jemal et al., 2006; Mohammed et al., 2015), which suggest that in part the predisposition for developing prostate cancer is associated with alleles that are more prevalent in certain populations or groups. We hypothesized that there are some DYS lineages among Iraqi populations with significant different frequencies between prostate cancer and healthy control people, indicating that belonging to these lineages would potentially increase the level of susceptibility or resistance to prostate cancer. In this study we discuss the role of 17 susceptibility genes commonly debated within the field of prostate cancer research.

Preparation of blood samples
Blood samples were collected from two 70 patients unrelated males living in middle and south of Iraq and sent to the genetic laboratories comprising 35 men with prostate cancer and 35 healthy male individuals as control. All patients that participated in the study were males over 40 years old who had been referred to the hospital for treatment because of advanced level of cancer.
DNA extraction and amplification
Amplification for Y- Chromosomal STR regions were carried out using sets of primers (Table 1). The master mix was homogenized by vortex for 3 s, centrifuged briefly, then 25 μl of PCR amplification mix was pipetted into each reaction well. One 1.2 mm punch from a card containing whole blood was loaded into the appropriate wells of the reaction plate. The positive amplification control, 1 μl of 2800 M Control DNA (10 ng/μl) was added to a reaction well containing 25 μl of PCR amplification mix. The preferred protocol used with the GeneAmp® PCR System 9700 thermal cycler is provided below. The estimated total cycle time was 1.5 h. PCR program is as follows: 96°C for 1 min, then: 94°C for 10 s, 59°C for 1 min, 72°C for 30 s, for 25 cycles, then:  60°C for 20 min 4°C soak. After completion of the thermal cycling protocol, the amplified samples were kept or stored at -20°C in a light-protected box. 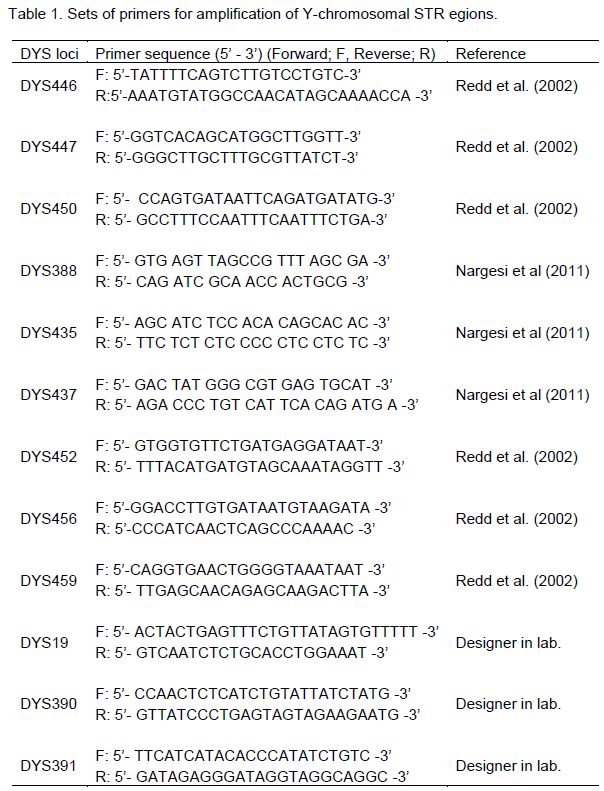 The major application of CE in forensic biology is in the detection and analysis of short tandem repeats (STRs). STR markers are preferred because of the powerful statistical analysis that is possible with these markers and the large databases that exist for convicted offenders’ profiles using the ABI Prism1 3130xl Genetic Analyzer 16-capillary array system (Applied Biosystems, Foster City, CA, USA) following manufacturer’s protocols, with POP-7™ Polymer and Data Collection Software, Genemapper version 3.5 software (Applied Biosystems). The allele designations were determined by comparison of the PCR products with those of allelic ladders provided with the kit. Nomenclature of loci and alleles is according to the International Society of Forensic Genetics (ISFG) guidelines reported in Gill et al. (2001). By comparison of the size of a sample’s alleles to size of alleles in allelic ladders for the same loci being tested in the sample, the STR genotyping was conducted.
Statistical analysis
A. Allele diversity was calculated as Nei (1987).

Where, n is the sample size and pi is the frequency of the ith allele.
B. Standard Error (SE): The standard error (SE) of allele frequencies was calculated as

Where, pi denotes the frequency of the ith allele at any given locus and N equals the total number of individuals screened at this locus. 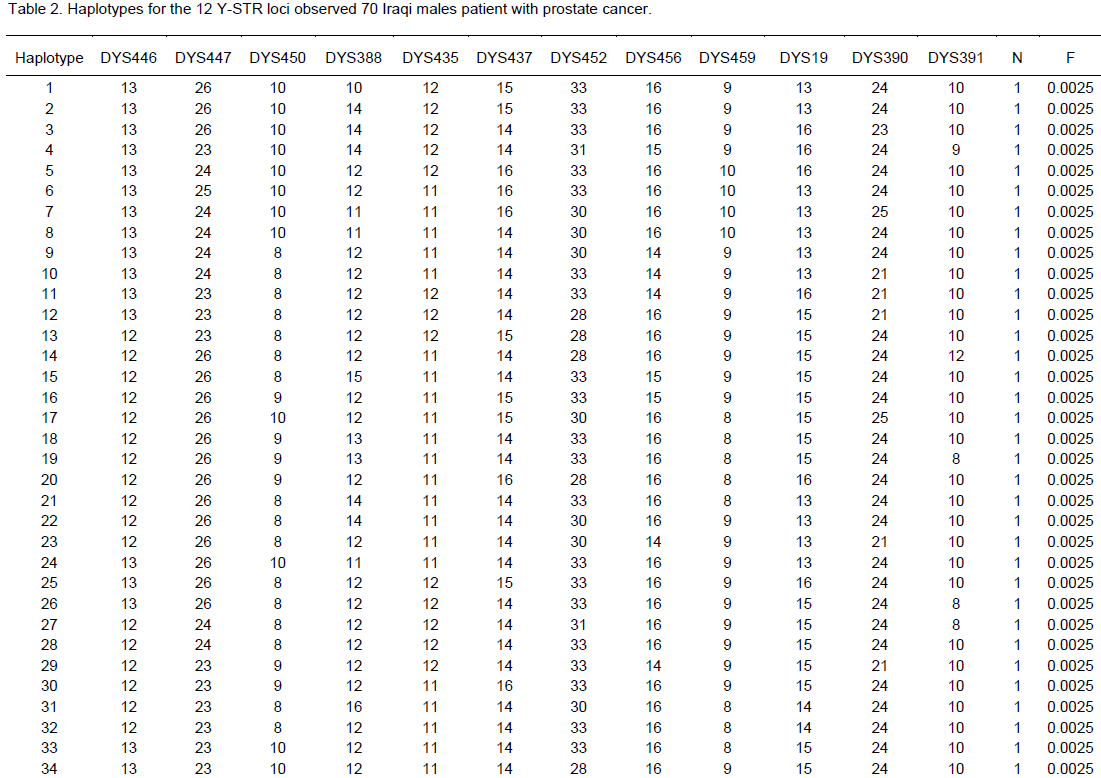 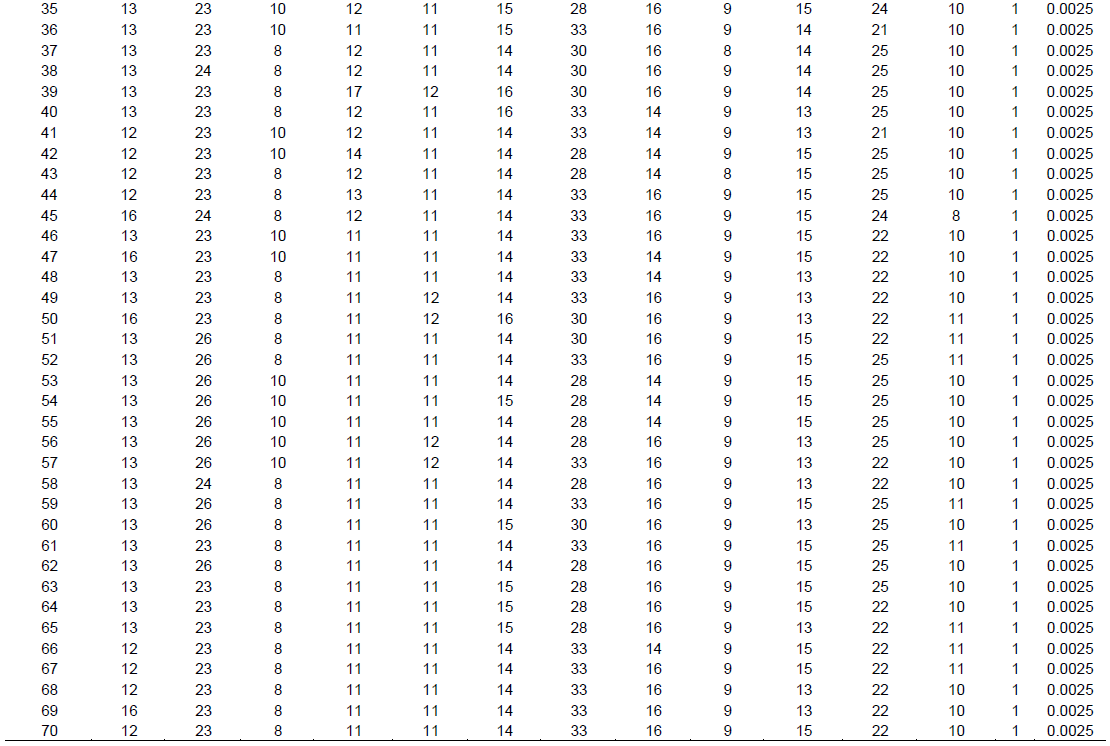 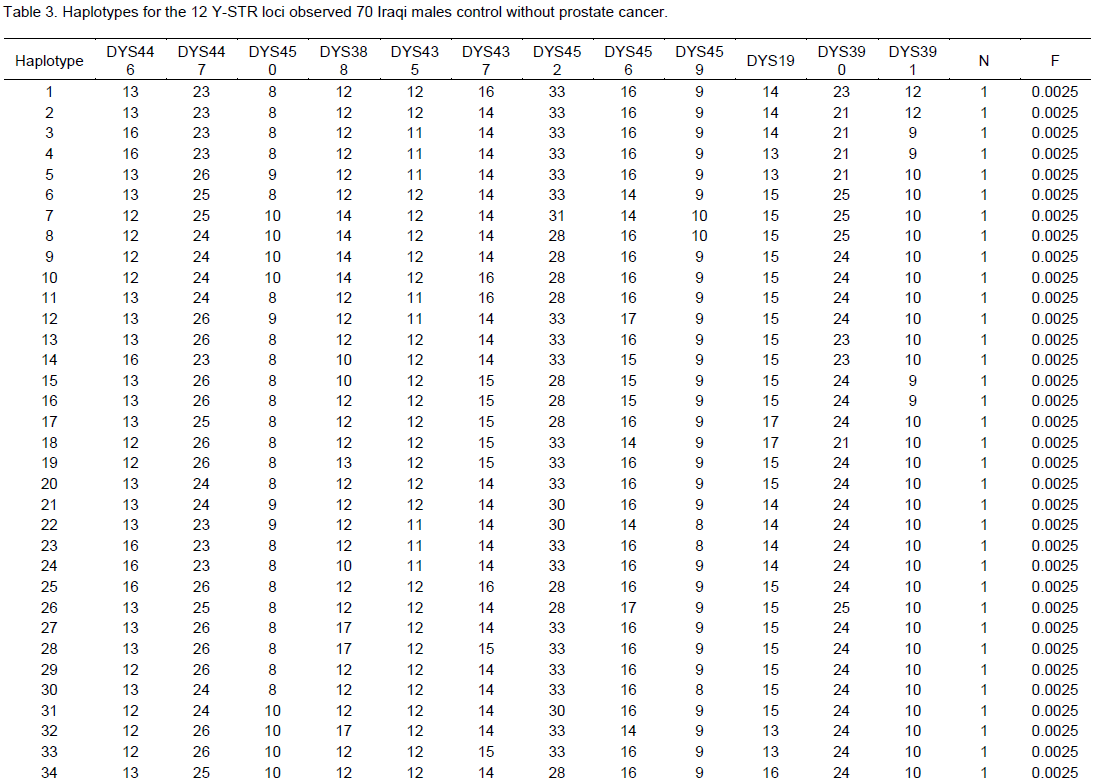 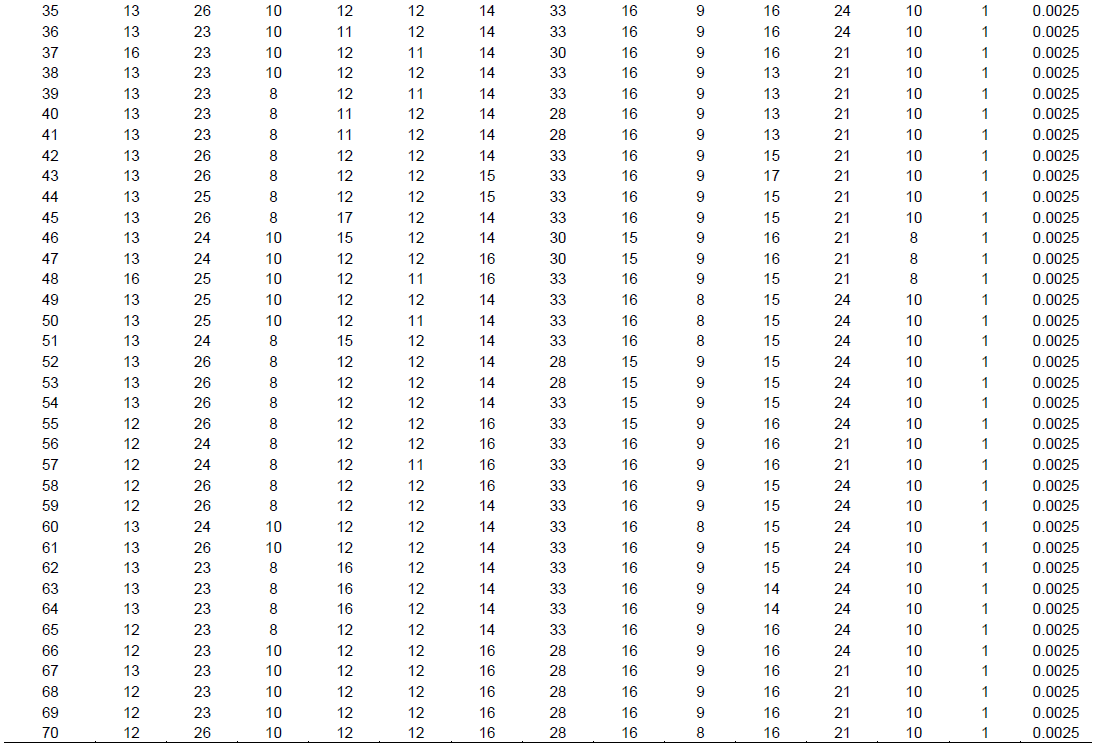 DYS459, four alleles (13-16) for DYS19, five alleles (21-25) for DYS390, five alleles (8-12) for DYS391, were found among the whole Iraqi subjects examined.
As shown in Table 6, no significant differences were observed between frequency distributions of different alleles among cases and controls. This study show the influence of genetic elements on prostate cancer, and it seems that DYS391 and DYS459 locus comprising with other loci have the potential to be used as a screening method for prediction of susceptibility to prostate cancer in Iraqi population. In another study, Y- lineages of prostate cancer patients and healthy control individuals were determined for four ethnic groups living in Hawaii and California. They found one lineage, belonging to the Japanese group in the study, associated with a statistically significant predisposition to develop prostate cancer (Paracchini et al., 2004). On the other hand, males who had either allele 3 of DYS391 or allele 25 of DYS390 showed a significantly higher risk to develop prostate cancer. These findings are consistent with those reported by Ewis et al. (2002) and Paracchini et al. (2003) and support the hypothesis that males from different Y-chromosomal origins are different concerning their susceptibility or resistance to develop prostate cancer.
In another study conducted by the current study group on Iranian population regarding comparison of Y-haplotype lineages of prostate cancer patients and healthy control individuals comprising DYS388, DYS435, DYS437, and DYS439 loci, it 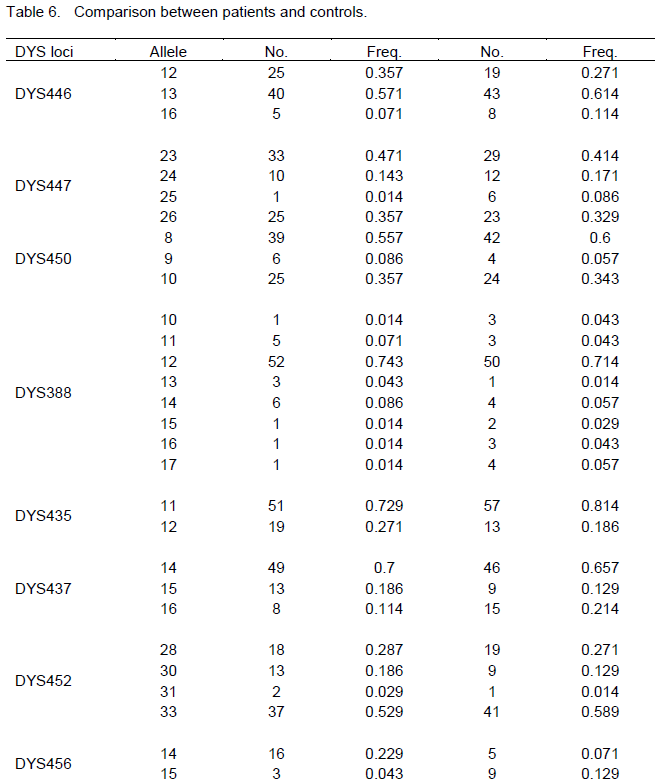 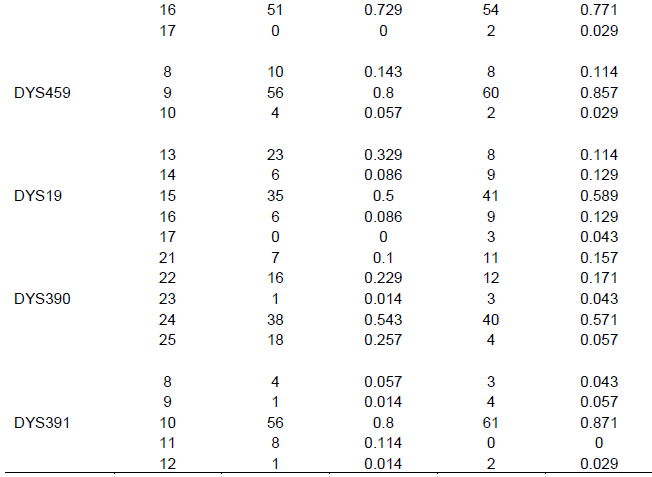 was revealed that some haplotypes had higher frequency among Iranian patients than controls  (unpublished data). In a study done by Kim et al. (2007), on Korean populations of prostate cancer patients and healthy controls using Y-chromosomal binary loci, no significant difference was observed in distribution of Y-haplogroup frequencies among Korean case and control groups. Ewis et al., (2002) compared allele frequency distribution of DYS19 in Japanese prostate cancer patients and healthy controls.  Based on their findings, males with allele C (194 bp) of DYS19 were more susceptible to develop prostate cancer.

The authors have declared that no competing interest exists.

I sincerely wish to thank Dr. Rafid H. for providing me the opportunity to work on this project. I would also like to thank Ghaidaa J. Mohammed from the Department Biology for her guidance and help in the laboratory work.