The present study was conducted to characterize the genetic diversity of 10 germplasm accessions of finger millet (Eleusine coracana (L) Gaertn) collected from diverse locations spread across the geographical zone of Northern Nigeria.  The digest was carried out using the molecular marker Restriction Fragment Digest (RFD on agarose gel while EcoR1 and Hind III restriction enzymes were used to cut the genomic DNA at specific sites. The results of our findings using RFD generated four clear DNA bands of molecular weights ranging from 10000, 8500, 1000 and 200 KDA. This clearly suggests the existence of polymorphism among the plant accessions.  These results demonstrate the high variability that exists amongst the genetic traits for these germplasm accessions. Information on this plant is very useful in unraveling the pedigree genetic relationships, as well as, in designing breeding and selection experiments for improvement of this crop. It will further stimulate growing interest on the genetic diversity and classification of this crop.

In Nigeria, the finger millet plant is diverse and is popularly used without restriction in our different multi-ethnic, multi-cultural and multi-religious groups. In various areas it is referred to as Tamba (Nigeria), Ragi (India), Mandua Winbi (Swahili) bulo (Uganda), kurakan (Sri Lanka), and fingerhirse (German) (Dewet, 1976). Epidemiological evidence showed that the plant is widespread and well adopted to diverse regions of the world. In East Africa, the plant is known to originate from Ethiopia and then spread to Southern African countries such as Namibia and Botswana. The plant is also well grown in Asian countries such as India and China, and also in Middle East countries (Gupta et al., 2010).

Germplasm identification in finger millet plant is an important link between conservation and utilization of plant genetic resources. The usefulness of germplasm in the study of plant genetic resources could play an important role in the generation and development of new hybrids and high yielding crop varieties with disease resistant traits to cope with adverse challenges associated with biotic and abiotic environments (Murray et al., 2008). The problem of erosion of genetic diversity of finger millet plant in Nigeria as a result of large-scale farming activities, urbanization and preferential land uses which results to leaching of plant nutrients, may deplete our natural vegetation which eventually may erode finger millet beyond the reach of rural farmers (Fakrudin et al., 2004). Information on genotypic characters of finger millet plant in Nigeria is useful in the natural evolution of the plant genetic resources. The genotypic characterization could reveal the genetic relatedness within these plant species. This will be useful in the conservation of new species and understanding of their genetic diversity. It may further provide information on the plant taxonomy as well as ecology of the finger millet plant.

The experiment on extraction of the DNA of finger millet was carried out in the Biotechnology Laboratory of the Institute of Agricultural Research (IAR) Ahmadu Bello University Zaria, according to methods of Padmalatha and Prasad (2006); Hibbett et al. (2006); Sakallah et al. (1995). About 30 g fresh weight of finger millet plant material was harvested and rinsed with cold water. The plant material was blot-dried with tissue paper and then placed in a porcelain mortar. Liquid nitrogen was added onto the plant material and ground into powder with pestle. The frozen powdered material was transferred into a 100 ml beaker and 10 ml extraction buffer added. It was homogenized thoroughly.

An aliquot of 1 ml was transferred into a 1.5 ml Eppendorf tube, to which 400 µl of 10% SDS and 5 µl of RNase was added and incubated in a water bath at 60°C for 1 h. At the end of the incubation period, the tubes were centrifuged at 10,000 rpm for 20 min at 4°C, after which the supernatant was collected and transferred into fresh tubes. 400 µl of Isopropanol and 400 µl of sodium acetate buffer (pH 5.2) were added and the tubes mixed thoroughly by inverting several times, after which the tubes were placed on ice for 30 min.

The genetic characterization using restriction fragment digestion (RFD) was initiated in April 2009 and completed in November 2009. This was aimed at cutting the DNA fragments from the finger millet samples at specific active site and amplifying them to estimate the quality of bands and weight of the plant.

Two restriction enzymes were used for this analysis, namely HindIII and EcoRI with the following recognition sequences: s’-AAGCTT-3’ and 5’-GAATTC-3’ respectively. The restriction endonuclease digest restriction was set up as follows: H2O was 23 µl, buffer was 10 µl, restriction enzyme was 2 µl, DNA template was 5 µl and total volume was 40 µl. There were 18 micro-centrifuge tubes used for this experiment, with each containing the mixture. The micro-centrifuge tubes were placed in water-bath maintained at 37°C overnight to incubate the reaction. 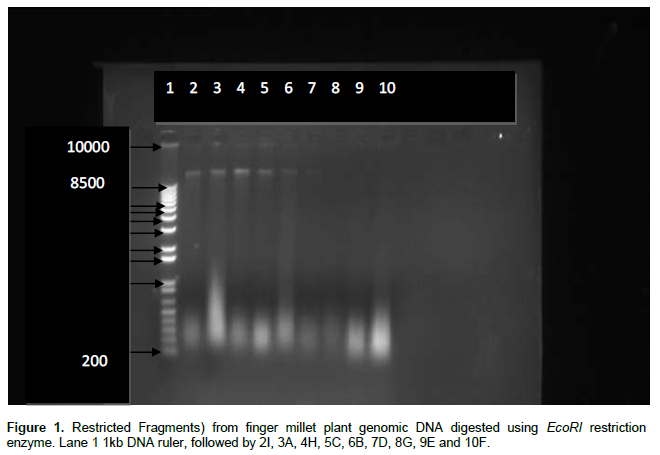 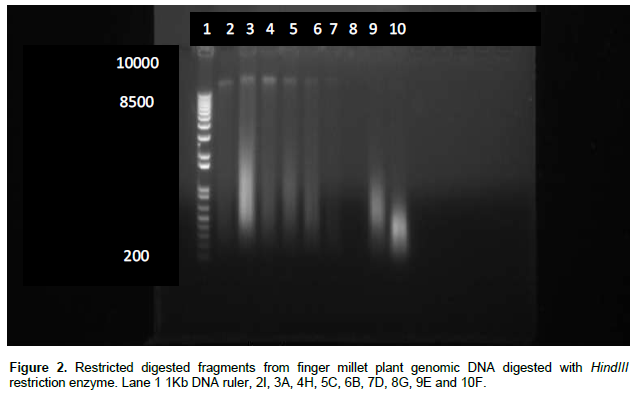 DNA analyses using restriction fragment digestion have proved to be very informative and useful in monitoring the genetic diversity present in finger millet accessions (Daas et al., 2008; Kanchan and Pande, 2008). Our results showed that all the finger millet accessions have clear DNA band ranging from approximately molecular weight of 200 and 100000 KDA respectively. This is a clear indication of the genetic relatedness of the plant as it has shown that DNA fragments are genetically directed and their patterns tend to express genetic identity and diversity of a particular plant as well as its relatedness to other plants. The plant of molecular weight of 200 KDA could indicate their close relations as members of the same species. The banding patterns observed showed that the plants may appear to belong to one strain while the remaining two could be grouped as separate strains. The faintness or heaviness of the bands could be due to genes exhibited at time of harvest of the plant or quantity of the particular restriction fragment or site specific hybrids encountered during DNA extraction.

The ability of restriction fragments to discriminate among genotypes and their application for cultivar identification is well known. The results of the present studies indicates that the pattern obtained with the use of agarose gel electrophoresis in DNA restriction analysis could be bases for the genetic identification of the different germplasm of finger millet. The polymorphism exhibited by the banding patterns is indicated in this study.

The maximum number of bands generated are very clear as in Figures 1 and 2. DNA restriction analyses showed ambiguous band which was assumed to represent a dominant allele. Our findings agreed with those of Salimath et al. (1995) and Kanchan and Pande (2010). In our investigation, we observed four clear bands after digestion with EcoRI and HindIII enzymes respectively. The existence of these four bands of approximate weight of 10,000, 85000, 1000 and 200 KDA was found. This further confirms the variations or diversities existing in these genotypes, and could be used as standard for genetic classification of the plant especially in areas covered by this study. Those accessions with the same fragments could be grouped as separate strain.

Fakrudin et al. (2004), confirmed the genetic diversity existing in the African accessions of finger millet, which could also be a possibility as indicated in our study. The fact that genetic relatedness has been demonstrated in our study, the DNA restriction fragments could be genetically directed and the pattern could tend to express genetic identity of a particular accession as well as its relatedness to other finger millet plants. The close similarity within the banding pattern could indicate their close relations to other plants. The assay of different fragments generated by restriction enzymes shows the potential for the molecular characterization of the finger millet plant.

The DNA restriction of finger millet germplasm has been demonstrated. There is need for further studies using markers such as polymerase chain reaction (PCR), sequencing and analysis of restriction length polymorphism (RLPD) to obtain finger prints of other finger millet genotype and their polymorphic accessions. These could be directed at investigating the roles of genes in development of improved and disease resistant varieties of the finger millet plant.