Mature body weight and milk production potential are well known essential mechanisms in determining the production competence of beef cows (McMorris et al., 1986; Montaño-Bermudez and Nielsen, 1990; Miller and Wilton, 1999; Zindove et al., 2015) and cows with high mature weight require more energy for maintenance. As a consequent, increasing mature cow weight (MCW) should generally be considered undesirable for the breeding herd as Fiss and Wilton (1989) asserted. In addition, the  inclusion  of  mature  cow  size  in  selection programme to improve feed efficiency of the cow herd has been emphasised (Garrick, 2010; Crook et al., 2010). Fiss and Wilton (1989) further added that elevated maintenance cost associated with large mature cows is detrimental in any breeding program. Mature cow weight can therefore be considered in genetic evaluation together with some genetically correlated traits measured earlier in life to account for culling in field data (Kaps et al., 1999). The aim of this study was therefore to investigate   the  impact  of  mass  selection  for  weaning weight (S1) and 18-months weight (S2) on mature cow weight compared to the unselected control line (S3) in Tswana cattle.

Data obtained from Department Of Agricultural Research in Botswana consisting of records as described in the previous study which focused the estimates of covariance components and genetic parameters for growth traits, was extracted for parameters as listed in Table 1 and used for cow weight analysis. Experimental animals were generally grazed on veld as a main source of feed from birth to maturity and occasional supplemented with mineral/nutritional licks during severe draughts and dry winter seasons.

Using the records from data collected on selected Tswana cattle obtained from DAR as described above, analysis of mature cow weight was undertaken using a mixed model. The analyses were performed in such a way that they utilized the entire observations recorded for each cow. The fixed effects fitted for mature cow weight were selection line, contemporary group, cow age in years fitted as covariate (linear and quadratic) and the interaction between cow age and selection line. Contemporary group was derived by concatenating season and year of weighing. Variance and covariance components were estimated by fitting repeatability animal models to the data using the ASREML program (Gilmour et al., 2015). Genetic parameters were then derived from the variance components. Correlations between mature cow weight and early growth traits were estimated by fitting bivariate animal models. Mature cow weight for each cow was taken as the average of all the individual cow weight observations recorded at different parturition and weaning dates. Only animals with all the records for early growth traits (birth, weaning, yearling, and eighteen months weights) and mature cow weight traits were extracted and used for the estimation of correlations. The general form of the model for the estimation of variance components with their expected variance-covariance structure were outlined as follows:

The random effects in the mixed models were assumed to have the following distributions:

Where; A is a numerator relationship matrix among all animals, σ2d is the direct genetic variance; Iq and In are identity matrices equal to the number of dams and number of animals with observation respectively; σ2c and σ2? are permanent environment variance and error (temporary environmental) variance, respectively. 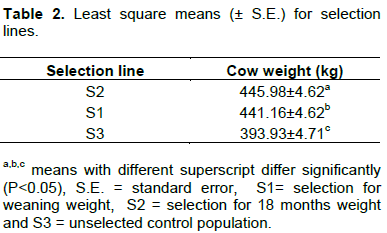 The results revealed that selection for weaning weight and eighteen months weight significantly increased mature cow weight. However, selection for eighteen months weight increased mature cow weight more than as selection for weaning weight did. The current results are  consistent with the report by Nephawe (2004) that an increase in overall growth at saleable age of calves (weaning and slaughter weight) may increase mature cow size, which the author further stated is of concern in the beef production system due to the cost of energy required to maintain mature cow weight. Boligon et al. (2013) also reported positive and medium correlation between mature cow weight and both weaning and yearling growth traits in selected Nellore cattle. Furthermore, Boligon et al. (2010) and Forni et al. (2007) revealed that selection of young animals for greater weight may result in heavier animals at adult age owing to indirect correlated response. 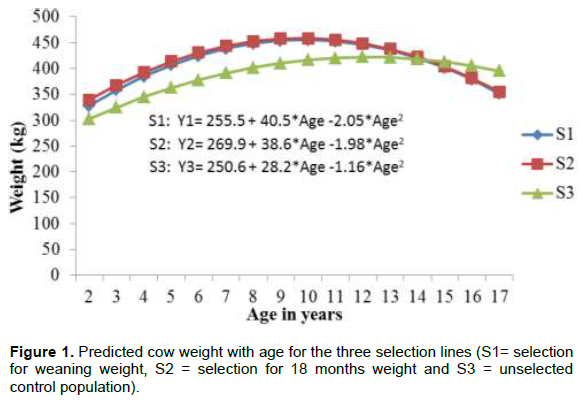 The results agreed with the findings by Nephawe (2004) who reported that cow weights demonstrated an increasing trend at early ages, a flush pattern at intermediate ages, and a declining trend at latter ages. Crook et al. (2010) also revealed a quadratic relationship between age of cow (in years) and cow weight at calving and at weaning. The same authors further stated that cow weights at calving and at weaning amplified rapidly with age up to around six years,  after  which  the  rate  of change with age diminished. Variation of cow age effect with selection line may be due to the fact that the magnitude of the influence of the two selection criteria differs, with eighteen months weight selection displaying more change. Therefore, the cow’s loss of efficiency to mobilize nutrients towards production and maintenance as it ages coupled with deterioration on the grazing pasture mostly affected the animals from the selection lines with greater mature cow weight than those unselected control cows with less mature weight. 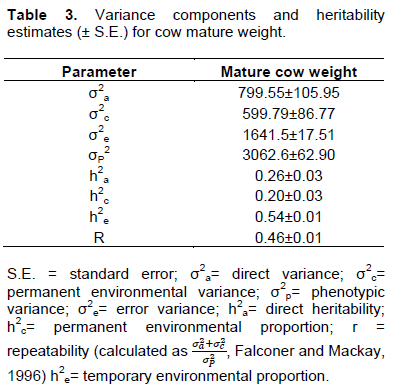 Direct heritability estimate of 0.26±0.03 currently obtained for mature cow weight of Tswana cattle is comparable with the range of values: 20.9±10.3, 19.3±9.3, 38.5±15.8 and 39.9±13.7 reported for Aberdeen Angus, South Devon, Limousin and Simmental, respectively by Roughsedge et al. (2005) and 0.29±0.04 and 0.37±0.04 reported for the South African Simmental by Crook et al. (2010). The significant heritability estimate indicates that the trait can be included in the selection indices for growth traits to control its unfavourable increase due to indirect response to selection for early growth traits in Tswana cattle. The ratio of the total phenotypic variance of cow weight due to permanent environmental effects associated with the cow accounted  for  approximately 20%. Mature cow weight in Tswana cattle appear to be a moderately repeatable trait as signified by the magnitude of total animal variance as a fraction of the phenotypic variance (46%). The results are slightly lower but comparable with those obtained by Nephawe (2004) for the Bonsmara cattle in South Africa, and Nephawe et al. (2004) using data of multi-bred beef cattle from the Germplasm Evaluation Project at the United States Meat Animal Research Centre. The results showed that temporary environmental variance which is attributable to random unaccountable effects accounted for a significant proportion of total phenotypic variance.