Genotype and sex effects on the performance characteristics of pigs

Genotype, sex and genotype-sex interaction (G×S) is increasingly important, because breeding programs depends on the selection of good genotype and the sex through which the effort will be concentrated for the propagation of the next generation. The main objective of the production of slaughter pigs is undoubtedly profit which is a function of the whole complex of characters, that is, qualities characteriz­ing reproduction and production traits. Production traits in farm animals are the resultant of an additive effect of the genes. The quantitative qualities are influenced by the genotype and environment. As a result, production traits  may  be improved both by genetic and non-ge­netic measures (Sprysl et al., 2005).

In pig production, selection is performed in purebred lines and the final product is a crossbred animal; also, there is an anticipated benefit of using crossbred information for estimating breeding values of purebred for crossbred performance (Hidalgo et al., 2015; Lopes et al., 2017).

The choice of a suitable genotype for the particu­lar conditions of commercial breeding is a decisive step for pig breeders. Performance and suitability of various genotypes are verified by tests of popula­tions.

Nevertheless, Whittemore and Green (2001) worked on the use of Gompertz growth function to describe the potential growth rate in pigs, which animals desire to achieve. Moreover, there have not been many studies on the effects of genotype, sex and their interaction on the growth and carcass characteristics of different pig genotypes in the humid tropics. Linear body measurements provide good information on performance, productivity and carcass characteristics of animals (Ige et al., 2006). So many researchers had used linear body measurements to predict performance characteristics in poultry (Oni et al., 2001; Adenowo and Omoniyi, 2004), goats (Ozoje and Mbere, 2002), sheep (Salako and Ngere, 2002; Salako, 2004) and cattle (Mbap and Bawa, 2001; Olutogun et al., 2003). However, there is a paucity of reported work on the use of linear body measurements as tools for pig improvement in Nigeria (Egena, 2010). Hence, the findings from this study will serve as complementary information to pig improvement and production.

The experiment was carried out at the Piggery Unit of the Teaching and Research Farm, Federal University of Technology, Akure, Nigeria. A total of 240 pigs of three genotypes: Duroc (DU), Large White (LW) and Hybrid (HY); averaging 30 kg weight at the time of the trial were used to conduct the experiment. The animals were sourced from the Livestock Department of the Ministry of Agriculture and Natural Resources, Ondo, Ondo State, Nigeria. They were allotted into clean pens, and feed and water were supplied regularly. The weights of the animal and linear measurements were taken on weekly basis while the feed intake was taken daily. The composition of the experimental diet is presented in Table 1. The diet satisfied the nutrient requirements of the animals at the various physiological phases as recommended by NRC (1998). 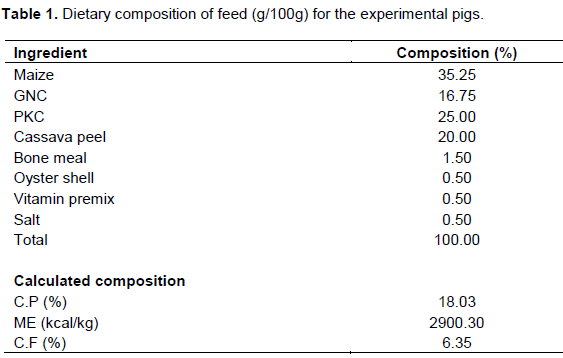 Data generated from the trial were subjected to analyses of variance using SAS (version 9.2). The effects of genotype, sex and genotype-sex interaction on body weight at 21, 35 and 56 days of the trial were estimated from least squares procedures of unequal sub-class numbers (SAS, 2008). Where significant differences were observed, differences between means were tested using Duncan’s multiple range test outlined in the SAS statistical package. The factors were defined as shown:

where Yijk = the observation of the dependent variable on the lth genotype and the jth sex of the pigs.

The body weight was obtained preferably in the morning before feeding the pigs. The pigs were restrained in a sack attached to a hanging scale. All linear measurements and weights were recorded. Live weight (kg) which is the actual body weight of the animals was obtained using livestock scale. Body length (cm) was taken from the base of the ear to the base of the tail. The heart or chest girth (cm) was recorded at the chest area just behind the forelegs. The initial body weights of the pigs were taken on day 1 of the trial and subsequently on weekly basis. Feed intake record was taken on daily basis. Feed conversion ratio was calculated as ratio of feed/gain. Measurements of chest girth (cm), scrotal size, rump depth, trunk length, tail length, back fat thickness, shoulder to tail, height at withers (cm) and body length were taken as earlier described by Onyimonyi (2002).

The estimated least-squares means of performance characteristics and linear body measurements by genotype and sex for days 35 and 56 of the experiment are presented in Tables 2 to 6.

The sex effect was not significantly varied (P<0.05) for all the parameters except for feed conversion ratio with highest mean of 4.27±0.12 recorded for male sex while female has the lowest mean value of 3.97±0.08. The genotype-sex interaction was also of no significant variation (P<0.05) for all performance characteristics at 56 days.

Table 4 shows the estimated least-squares means with their corresponding standard errors for the linear body measurements at 35 days of the experiment. The analyses of variance indicated  strong   significant  (P<0.05)  effects  of genotype on all the linear parameters. It exerted significant (P<0.05) influence on tail length, shoulder-tail and body length with the highest mean from HY: 111.01±3.63 cm, 65.27±1.51 cm and 129.90±11.54 cm, respectively. Sex effect and genotype-sex interaction had no significant influence (P>0.05) on most linear measurements at 35 days of experiment.

Analyses of variance for the pig body weights at various stages

From this study, it was observed through the analytical results that there were differences in body weight, feed intake, feed conversion ratio, rump and scrotal size of genotypes of the pigs at different days considered in the study. These differences in genotype performance were due to genetic makeup of the individual pigs and environment provided for gene expression. This is in line with Johan (2004) who stated that genotypes differed in their mature composition and how they developed towards it. This study is also in concord with the result of Yoosuks et al. (2012) who studied the effects of genotype and sex on predicted feed intake and performance of growing pigs. Fleming et al. (2018) also stated that genetic differences could be found between breeds, between genetic lines within a breed and between individuals within a line. The cross bred pig (Hybrid) showed the best performance among the three breeds for body weight, feed intake and feed conversion ratio. This showed that the Hybrid has harnessed the best gene from the two parents of different genotypes in order to improve their performance. Fitzhugh et al. (1975) and Fleming et al. (2018) remarked that crossbreeding combined differences in genetic merit for specific characters to synchronize effective performance characteristics and adaptability resources that were most economical.

Moreover, Duroc had the highest means for the feed conversion ratio. This means that they utilized feed better than the Large White and the Hybrid. This is in line with the result of Debreceni et al. (2018). These authors reported highest feed intake and feed conversion ratio in Mangalitsa breed of pig with better average daily gains in Large White and Hybrid (crossbred of Mangalitsa and Duroc). Also, at 56 days of the study,  Large  White  (LW) had the highest means for back fat thickness at 1st rib and 10th rib. This implies that the genotype has the ability to deposit fat compared to others and this could be improved upon during breeding programmes. Furthermore, sex was also a major source of influence on the performance characteristics of the three breeds especially for feed intake and feed conversion ratio. The study showed that the female ate more than the male and had a higher feed conversion ratio than the male. This might be attributed to differences in the physiological processes in the two sexes.

The female ate more feed to regain losses during estrus, production of eggs and fat deposition; hence they were good feed converter. This observation agrees with Chineke (2005) and disagreed with the report of Ozimba and Lukefahr (1991) on the study of rabbit performance and Yoosuk et al. (2012) on the effect of sex on pig performance. The effect of sex for other traits at various ages was similar. The females had heavier body weights than males which disagreed with the findings of Hanne et al. (2018).

Genotype strongly influenced linear traits at various stages of the experiment. There were consistent increases in linear measurements from day 35 through 56 days. This was expected since breed combinations promote growth, which is in turn associated with increase in mature body size. In general, each measurement studied increased with increase in age in each genotype. Ozoje and Herbert (1997) reported similar findings in crossbreeding experiments involving goats and observed further that these increases, calculated as a percentage of their values at birth, were at different rates. The significant effect of genotype on the growth of the pigs is in line with the result of Rauw et al. (2017) who reported significant effect of genotype in pig growth performance, when they studied the effects of diet and genetics in growth performance of pigs. Among the genotypes, Hybrid was generally superior in linear traits over other genotypes.  Differences in linear traits reflect useful measures that depict the size and shape of animal (Chineke, 2005). The Hybrid showed the best performance for body length, shoulder to tail and tail length among  the  three  breeds. This could be attributed to the contribution of genes from the two parents that enhanced a better performance of the cross bred and made it more superior to the parents.

Sex exerted no significant influence on all the body measurements considered at various stages of the study; though, the male was observed to have the highest mean values for all the linear measurements except for the height at wither where the dam had the highest mean. Similar results have been reported by Chineke et al. (2002a). The male had bigger and longer body in most measurements taken than the females and was contrary to the findings of Akpan (2000) and Chineke et al. (2002b). The significant effect of sex on linear body measurement of growing pigs from this study was in concord with the result of Onyimonyi et al. (2010) and Egena et al. (2010). These authors reported that body linear measurements were influenced in growing pigs that are males.

The genotypes showed significant differences among the individual pig weights at different stages of the study. The Hybrid showed a higher body weight at 21, 35 and 56 days of the experiment. Similar observation was recorded for Thapa and Timsina (2018) for production performances of crossbred pigs. These authors attributed the higher performance to heterosis. Thus, cross breeding would lead to improvement in production traits. Moreover, Duroc showed a better performance in body weight as compared with the Large White at all stages of the study. This could mean that the Duroc had more body conformation and feed utilization than the Large White.

From this study, it could be recommended that crossbreeding programs for pigs will improve the existing genotypes and this should be embarked upon. Also, provision of suitable environment such as housing and nutrition will enhance pig production in Nigeria.