Dairy production is the single largest agricultural sector in the world. The sector  accounts for 14% of global agricultural trade, with milk being the most traded agricultural product (Wang and Li, 2008). In Uganda, the dairy industry is estimated to contribute about 50% of the total output from the livestock subsector (Ekou, 2014). Efforts to improve dairy production in the country have been enhanced through introduction of Holstein Friesians as the main temperate dairy breed (Galukande, 2010).  However, the dairy sector in Uganda is still facing many challenges, including low dairy herd productivity (Kabirizi et al., 2006).

Dairy herd productivity is mostly determined by the cow’s reproductive performance as it influences the efficiency of milk production and the number of calves produced  in  the  cow’s  lifetime  (Plaizier   et  al.,  1997).

Among the reproductive performance measures, that is, age at first calving, number of service per-conception, calving to first service interval (CSI), calving interval (CI) and pregnancy rates are the commonly used indices on most dairy farms. Suboptimum dairy cow reproductive performance is typified by low pregnancy rate, increased number of service per conception, delayed postpartum intervals to first oestrus, and long calving intervals, among others (Esslemont, 1992). As a result, suboptimum reproductive performance leads to fewer calves born during the productive lifetime of the cow, a high involuntary culling rate, veterinary costs, all of which erodes the profitability of the dairy enterprise. Numerous factors such as inadequate nutrition, infectious genital diseases, environmental stressors, as well as cow-based factors including breed, parity and level of milk production, have been associated with occurrence of suboptimum reproductive performance among dairy cattle.

FORMS OF SUBOPTIMUM REPRODUCTIVE PERFORMANCE AMONG DAIRY HERDS IN UGANDA

In practice, it is recommended for dairy producers to set a voluntary waiting period (VWP) of 60 to 65 days after calving during which a cow is not bred even when it comes on heat. This is meant to allow the reproductive system of a cow to achieve full recovery from the previous calving. Immediately after VWP, cows are required to be bred on the subsequent heat so as to conceive within 80 to 85 days after calving (Dayyani et al., 2013). This is based on the fact that the goal of cow-calf operations is to obtain one calf per cow per year, given that the gestation length is 280 days.

Pathological postpartum cyclicity is a functional disorder characterized by failure of a postpartum cow to resume ovarian function, ovulate and establish pregnancy within 80 to 85 days after calving. At farm level, cows with this condition have long calving to first service intervals, extended calving intervals, low submission rates, low pregnancy and calving rates (Lucy, 2001). The inability to meet the optimal dairy reproduction performance targets, compromises the overall profitability of the farming business. Although the causes of this condition include congenital defects, physiological disturbances/imbalances, management errors and infectious agents, the underlying feature is the deviations in hormones that regulate reproductive activities among affected animals. Among dairy farms, pathological postpartum anestrus tends to affect individual animals or a particular sub-group of animals in the herd. The main forms of pathological postpartum anestrus include: sub estrus, true anestrus, ovulatory defects and cystic ovarian disease (COD) (Max, 2010).

In Uganda, a study (Kanyima et al., 2014)revealed that up to 81.4% of dairy cows in peri-urban Kampala resumed cyclicity within 60 days post calving. However, only 23.7% of the daily cows maintained cyclicity and were therefore the only ones that could achieve the recommended 365-day calving interval. In this study, poor nutrition as well as management errors such as manual extraction of after-births were associated with occurrence of pathological postpartum cyclicity patterns. Therefore, proper husbandry practices especially management of postpartum dairy cows need to be emphasized through training of farmers at household levels.

Calving interval (CI) refers to the number of days between successive parturitions (calvings). Several studies have examined the economics of maintaining a regular CI on milk production and overall dairy profitability. In these studies, the need to review all major dairy herd management practices as well as costs of producing milk are highly emphasized before deciding the length of CI to adopt (Arbel et al., 2001). Under normal circumstances, the acceptable CI is when a dairy cow calves after every 12 months.

Pregnancy rates are universally regarded as the most important measures of breeding efficiency used to monitor reproductive performance among dairy herds (Chebel et al., 2004). This is in view of the fact that this parameter is easy to measure and less biased compared to CI, which requires the data of two subsequent calving. Pregnancy rate measures the percentage of cows eligible to be bred that actually get pregnant in a given time.

In Uganda, fewer studies on pregnancy rates among dairy cattle herds have been conducted. This is mainly due to the fact that fewer farmers keep breeding records. Besides, natural mating is the mostly practiced breeding method which makes it impossible to know exactly when the cows were mated. A survey on the use artificial insemination (AI) among dairy herds in peri-urban Kampala reported low pregnancy rates (Eklundh, 2013). The reported low pregnancy rates were based on farmers’ responses,  recorded  breeding repeats and pregnancy wastages. On the other hand, controlled breeding experiments, as shown in Table 2, recorded higher pregnancy rates.  De Vries (2006)observed that in order to achieve a high pregnancy rate of at least 25%, at least, both 65% service rate and 35% conception rate should be realized. Management interventions aimed at minimizing heat and environmental stress, adequate nutrition and control of infectious diseases are important to ensure the high pregnancy rates. Correspondingly, good animal management practices such as adequate nutrition and deworming reported in the Ugandan experimental breeding program (Cumming et al., 1994), could explain the attained higher pregnancy rates.

In dairy cattle operations, abortion is defined as expulsion  of the fetus between the age of 42 days and approximately 260 days’ of gestation (Hovingh, 2009). Abortions cause significant morbidity and mortality as well as heavy financial losses to the affected dairy herds. The effects of abortions include low pregnancy and low calving rates, reduced milk production and pre-mature culling, ultimately reducing overall dairy herd productivity (Hovingh, 2009). In view of the significant effects of this reproductive disorder, the abortion rate is commonly used to monitor reproductive performance among dairy herds. There are numerous causes of abortion among dairy cattle herds which include infectious agents (bacteria, viruses, protozoa, and fungi), toxic agents, heat stress, and genetic abnormalities. It should be noted that  most dairy herds suffer an abortion rate of 1 to 5%; and this is often considered normal (Lucchese et al., 2016). However, if the abortion rate increases to above 5%, then the manager should begin to make efforts to investigate the cause. In Uganda, a herd level abortion rate of 30 to 35% has been reported among urban and peri-urban dairy farms (Benon et al., 2015). Furthermore, a study by Magona et al. (2009)revealed that the abortion rate was 5.4 to 23% among zero-grazed and pastoral systems in Uganda. This abortion rate is far beyond the recommended tolerable level and there is therefore a need to investigate the causes and come up with intervention strategies to address this challenge.

Several studies have reported poor nutrition among dairy herds in Uganda (Kiggundu et al., 2014; Nakiganda et al., 2006). This has been attributed to the fact that most dairy herds depend entirely on rain-fed natural feeds and pastures, with a few engaging in fodder production and conservation. As a result, the dairy animals are unable to meet the nutritional needs which translate into low milk production and reproductive performance. A study revealed that about 30.7% of dairy cows in Uganda suffered pre-partum negative energy balance (Dickson et al., 2014). The same study reported that 18.8% of the dairy cows in Uganda had postpartum subclinical ketosis. Negative energy balance and subclinical ketosis have been reported as major causes of high incidences of postpartum diseases as well as suboptimal dairy reproductive performance. Furthermore, feed scarcity due to drought (Nakiganda et al., 2006), insufficient feed sources (Kiggundu et al., 2014), suggest that dairy cows in Uganda do not get enough nutrients to meet their production and reproduction potential.

Dairy farm and herd management errors are caused by poor workmanship by the managers and cattle handlers themselves. These errors include failure to keep records, misidentification of animals, poor heat detection, and poor management especially during the post parturient interval (Mugisha et al., 2014). It is important to note that studies on management causes of sub-optimum reproductive performance especially general husbandry practices have been the most emphasized in Uganda.  Kanyima et al. (2014)reported management errors that include calving in unhygienic environments, manual extraction of cow placentae shortly after calving and traditional practices of managing obstetrical cases among dairy farmers in peri-urban Kampala. These practices predispose to post parturient disorders such as endometritis, metritis and retained afterbirth, all which adversely affect reproductive performance of dairy cows. Poor record keeping has also been reported among dairy farms. This is attributed to the fact that most farmers are illiterate, while others find record-keeping as laborious, time consuming and meaningless. Failure to keep records lead to misidentification of animals, inability to follow up herd performance and inefficiency in making decisions. Moreover, a study by Mugisha et al. (2014)reported record keeping as a key factor that determined the success of heat detection and artificial breeding services among dairy farms in central Uganda.

Suboptimum reproductive performance caused by infectious  genital  diseases  remains  a serious challenge among dairy herds (Campero et al., 2003). The prevalence of these infections varies across herds and production systems. Brucellosis, BVD, IBR, Trichomoniasis and Vibriosis are known to be among the most important infectious genital conditions in many parts of the world. These conditions cause several reproductive disorders that include embryonic death, repeat breeding, abortions, stillbirth and uterine infections. In Uganda, several studies (Table 3) have reported the existence of infectious genital diseases among dairy herds. However, there are wide variations in occurrences of these diseases in different parts of the country. Of all the infectious genital diseases, Brucellosis has been the mostly studied with several researchers reporting prevalence ranging from 0 to 100% among dairy herds in Uganda. On the other hand, BVD sero-prevalence of 39% was reported among dairy herds in urban and peri-urban Kampala (Jönsson, 2013). Although the prevalence of IBR has not been reported in Uganda, several studies in other African countries have reported more than 50% prevalence among cattle herds. A recent study  reported a herd prevalence of up to 81.8% among the major milk sheds in Ethiopia (Sibhat et al., 2018). Other studies have reported IBR prevalence levels of up to 74.47% in South Africa (Njiro et al., 2011), and 69% among cattle herds in Ghana (Adu-Addai et al., 2012). The fact that most African countries have similar agro-ecological conditions and farming systems suggests that these diseases may be significant in Uganda as well. It should be noted that fewer studies have been conducted to associate the prevalence of infectious genital  diseases and occurrence of suboptimum reproductive performance conditions in Uganda. However, a study by Magona et al. (2009)reported high incidence of abortion rates among Brucella sero-positive dairy cattle herds in Uganda. Other infectious genital diseases like Trichomonisis and Vibriosis have not been studied in Uganda. 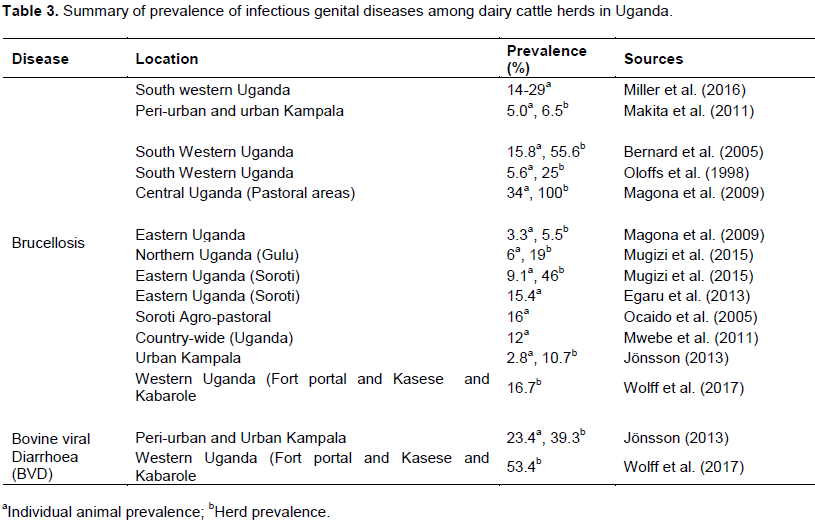